It's been a long time since I played any games based around ancient Greek myth; I think the last such one was in 2016 (here: Jason and Medea).  All my previous outings have used the 7th Voyage rules from Crooked Dice, but despite there being much to admire in these rules, something wasn't quite right for me.  More specifically, the combat felt flat; both sides would simply stand next to each other and hack repeatedly until someone got lucky and hit their opponent enough times to knock them out.  Boring...

Since that last game over 2 years ago, I've been intending to write my own, revised combat rules for 7th Voyage.  This new adaptation would be based loosely on the equivalent combat rules from 7TV (2nd edition), but with inspiration also taken from Song of Blades and Heroes and the existing 7th Voyage.

Well, I finally got round to firming up and writing down my ideas (which I'll call "8th Voyage"; more on those in a future article) and this is a report of the first playtest.

Jason and the Playwright 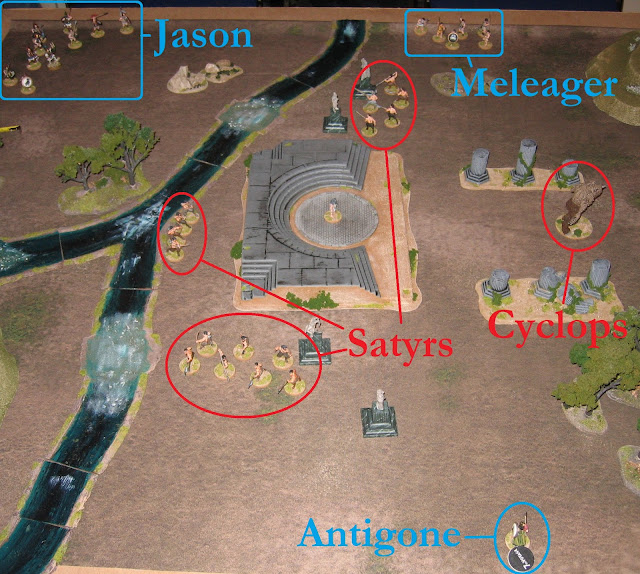 The story for this game would be very simple: it's the Steal scenario from the 7th Voyage rulebook.  However, instead of an object the Argonauts have been charged with the rescue of a person.  The famed playwright Phineas has fallen in with bad company; he's been taken away by a bunch of hard-partying satyrs!  It's not completely clear whether Phineas has been kidnapped, or whether he has been beguiled and tricked into this wasteful life...

Either way, Jason and his fellow Argonauts have determined to rescue the man.  They have an ulterior motive: Phineas's work is much respected in Agathopolis, their next port of call.  If they can persuade the playwright to put on a show in that town then their passage would no doubt be expedited by the locals!

So, forces are as follows:


On the other side:
Phineas, the playwright, starts in the middle of the ruined theatre.  He is too befuddled to move on his own, but can move when accompanied by any of the rescuing humans. 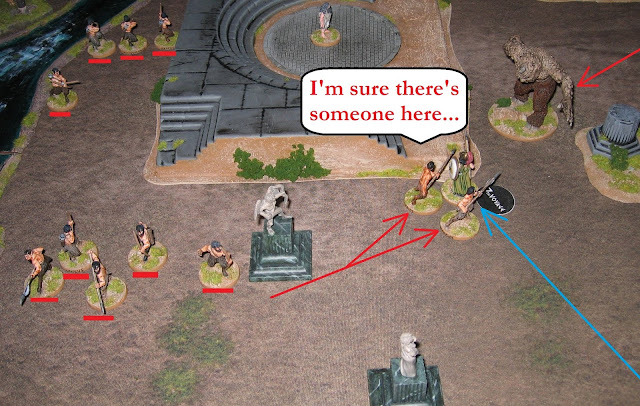 Made invisible by her magic helmet, Antigone stalked forwards towards the amphitheatre and the playwright.  The nearest satyrs sensed her presence (maybe saw dust swirls, or smelled something)  but although they prodded the area with their spears, they failed to make contact with the heroine. 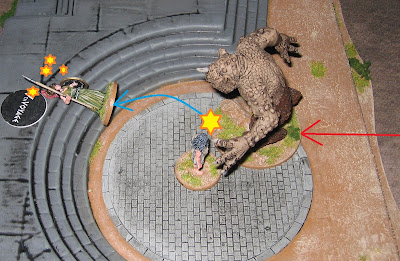 She reached Phineas and was just about to make herself visible and lead the playwright away when the cyclops came lumbering up.  Like the satyrs, it could sense that something wasn't right, but unlike them it had a much longer reach.  One of its flailing limbs caught Antigone with a forceful backhander and threw her across the stage.  She wasn't injured but - at least temporarily - was decidedly out of action. 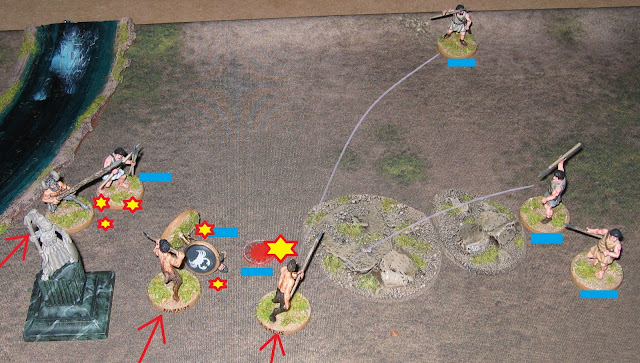 Help wasn't forthcoming from Meleager and his light infantry.  The young javelineers were ineffective against the tougher satyrs who rushed to intercept them, though one lad caused a lot of frustration to Hylaeos (the satry leader) by simply refusing to die!  Even the hero Meleager was knocked off his feet and wounded; for a few moments he seemed to be in real trouble... 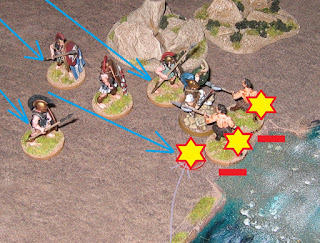 Jason made better progress.  Two satyrs tried to block the river ford, but Jason and his hoplites swept them aside with ease.  Not everything went their way, though: a lucky, long range arrow from a satyr archer felled one of the Argonauts in return. 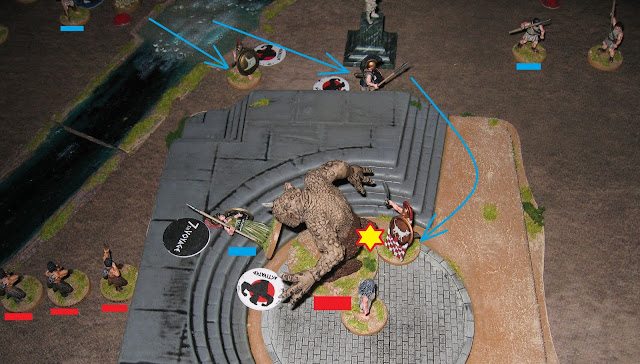 Now that the way was clear, the Argonauts surged forwards.  The cyclops was reaching about in the dust trying to find the still-invisible Antigone when one of the hoplites ran around and stabbed it from behind. 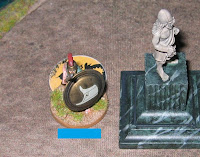 Remember that the cyclops is fearsome to all other models on the table?  Since it was now pretty much the centre of the action, an increasing number of Argonauts and satyrs had to take fear tests whenever they were activated.  Not all of them passed; indeed later in the game we ran out of my yellow & black "Scared" tokens and had to improvise with other types of counter as well... 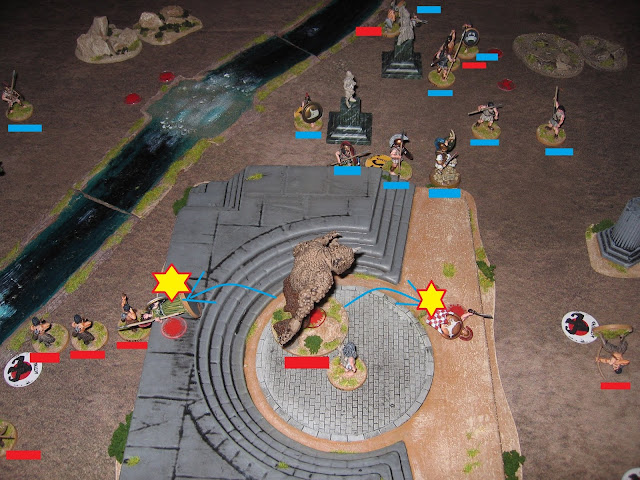 Whilst the cyclops roared with pain, Antigone made her move.  She stabbed at the creature (thus becoming visible at least for a while) - but her blow was ineffective.  In return, the cyclops belted her so hard that she landed in the amphitheatre's cheap seats (at the back).  It then turned around and swatted the Argonaut away as well.  Truly it was a very annoyed monster!

The dazed - and now visible - Antigone was promptly showered with arrows from the nearby satyrs.  Although a fair number bounced off her shield, eventually one shaft struck home and took her out of action.

Bellowing loudly, the cyclops rushed at the approaching Argonauts.  Its initial rush left Jason on his back in the dirt, but the hero was soon on his feet again and attacking.  Whilst he and the approaching Meleager distracted the monster, a brave Argonaut sank his spear into its flank [the spearman was considerably aided by a +2 modifier gained from sacrificing an event card.  As it happened, this particular event card was only useful for a spell caster, so "sacrificing" it wasn't much of a loss for the Argonaut player!]. 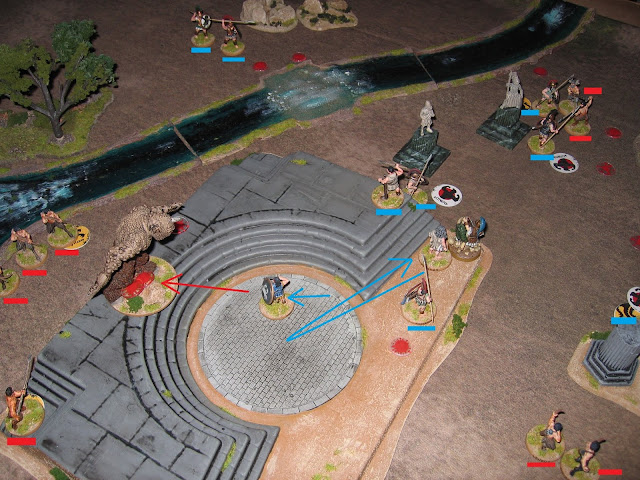 Between them, Meleager and the Argonaut attacked repeatedly and forced the cyclops back all the way across the amphitheatre.  Jason saw his chance, rushed up to Phineas and started to hustle the confused playwright away from the fighting. 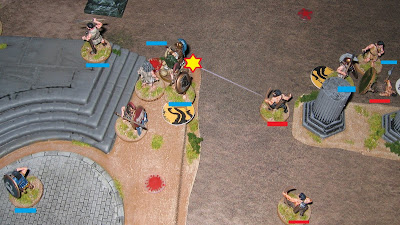 Before he could escape cleanly, Jason was shot in the back with an arrow.  Of course, it would take more than a single injury to fell a hero of his standing, but even so it was worrying... 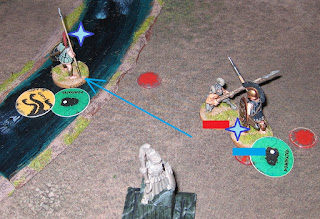 Two Argonauts had been tasked with killing Hylaeus, the satyr leader, or at least with keeping him occupied so that he couldn't do anything especially useful.  After fighting with them inconclusively for much of the game, Hylaeus switched tactics and started to use his hypnotise power instead of his spear.

Almost immediately, he managed to dominate both of the humans; they were at least temporarily under his control.  The wily satyr suggested that they go and take a bath in the river, reasoning that the Argonauts would have to take drowning tests when they were next activated.  In this way there was a good chance that they would be lost to their original side whether or not they regained control of their senses.

As it happens, neither man recovered from the hypnotism by the end of the game; they were never seen again by the other Argonauts... 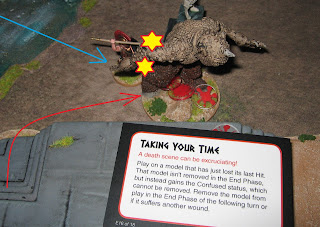 The cyclops tried to go around the amphitheatre to reach Jason and the escaping playwright, but it hadn't gone very far when it was charged from behind by an exceptionally enthusiastic Argonaut.  The man stabbed the monster fatally and as it writhed around on the ground [courtesy of a "Taking your time" event card], he stabbed it some more until it finally stopped moving.  Thus was Antigone avenged... 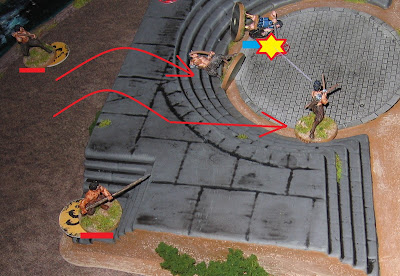 The exhausted Meleager was suddenly surrounded by satyrs who bounded into and across the amphitheatre.  He tried to defend himself, but was struck by arrows and fell. 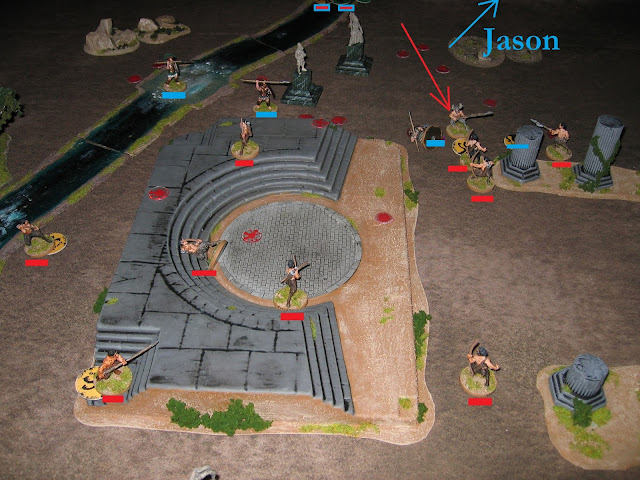 With the loss of this hero and the two hypnotised hoplites, the Argonauts cast was thoroughly shaken.  Jason escorted Phineas off the table and at that point we had to call the game because we ran out of time.

So, who won?  Scores were as follows:

Hylaeus and the Satyrs

...for a total of 6VP.  Therefore, it's a marginal Argonaut victory, albeit a somewhat Pyrrhic one.

However, consider this: if the game had gone on for just one more turn, the satyrs would almost certainly have axed the Argonauts [i.e. reduced them to 1/4 of their starting models] and would thus have earned themselves another 2VP, increasing their score by enough to claim themselves a marginal victory.

This was a fun game for me (as umpire) and hopefully for the players as well.  I'm delighted to have re-entered the world of gaming Greek Mythology!

The Argonauts achieved their goal of rescuing Phineas.  In addition, their heroes all acted, well, heroically.  Some hoplites got stuck in enthusiastically to help their leaders, though a few just cowered at the back and refused to engage.  The psiloi/javelinmen were not particularly effective, which is as it should be...

For their opponents, the cyclops did its thing, dominating the centre of the action and terrifying all and sundry.  The satyrs proved to be remarkably resilient; relatively few fell in combat - though this might reflect their tactics rather than any special powers.  I'm still not quite sure how they managed to wipe out so many armoured, veteran warriors!

My revised, "8th Voyage" combat rules seem to have worked very well and I don't see any immediate need to make changes to them.  Some more play-testing would be good before I can declare them to be "finished", of course.  I will publish this set of house rules soon, so if anyone is curious then you can see where my thinking has led.  In the meantime, I think that combat in 7th Voyage has become a whole lot more fluid and interesting...