As regular readers of my blog should be aware, we're playing our way through the "Mungo Mah Lobeh"/"Throne of Thunder" campaign for the wonderful Congo rules from Studio Tomahawk.  Previous encounters are described here:

In the 3rd scenario of the campaign Mary Kingsley, our heroine, has to catch a boat.  However, the crafty witch doctor Ujuwa is determined to stop her.  The game is set in swampy ground on the banks of a large river, so it could get very sticky. 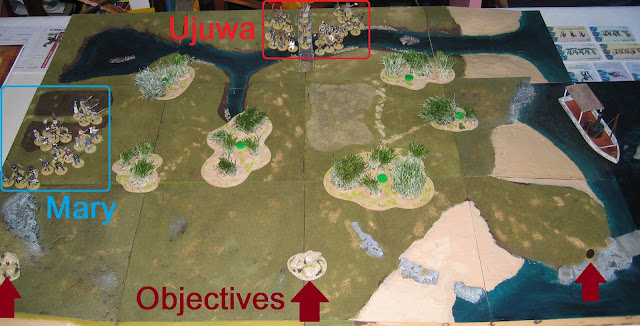 Mary's expedition has to attract the attention of the boat's captain, so as to make him pull in to the jetty and take them on board.  There are 3 places where waving & shouting might be effective: the pier itself and a couple of rocky outcrops.  Apart from that, the terrain is low lying and swampy, inhabited by hippos  crocodiles and containing dangerous quicksands.

For each uncontested objective at the end of every turn, Mary scores points.  The closer the objective to the boat & river, the more points it scores.  These points are used at the end of the game to determine who has won and by what margin.  The total needed for a major win for Mary's expedition seems like quite a high number...

From the start (and as might be expected), both sides raced for their objectives.  One of Mary's groups (the young warriors) camped on top of the nearest vantage point/pile of stones and started to wave and shout at the ship.

Another group (the adventurers) sprinted towards the second vantage point.  More on them in a moment... 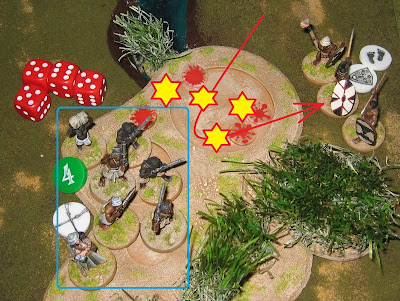 Mary's own group (ascaris and a bearer) entered the nearest patch of marsh to look for discoveries.  The terrain was found to be quicksand, so they proceeded very carefully, but they did discover a useful '4' token.

Then, the foremost of Ujuwa's warriors charged in from the other side and attacked them!  Despite Mary's best efforts at pacifism, 4 figures from each side fought hand-to-hand.

This skirmish went decidedly against the head: the ascaris (ill equipped for melee) scored 4 hits to nil against the spearmen, sending the few survivors reeling back in disarray.  This was a calamity for the tribal forces who fully expected to win such an encounter, or at least to inflict some damage in a close-run fight. 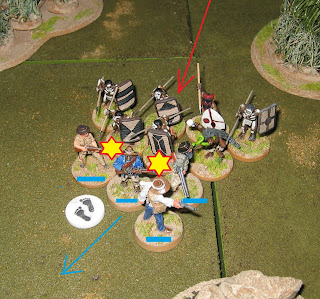 In revenge, Ujuwa's senior warriors attacked the adventurers, catching them before they could bring their firepower to bear.  The tribesmen won the melee easily and over the next few phases they proceeded to chase down and wipe out their opponents (scoring quite a few points for winning melees along the way...). 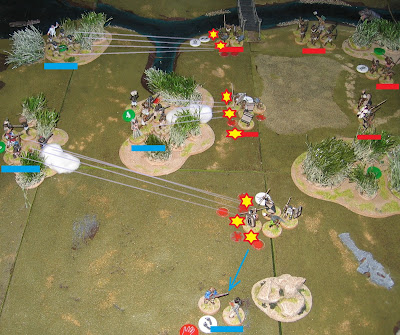 Then, in one of those "I couldn't have timed it better if I'd been prescient" moments, Mary's forces opened up at the same time with almost every firearm they had.  The volleys of bullets tore the heart out of the native warband, leaving them with no really effective melee units.  From this moment on, it was not really a question of if the Kingsley Expedition would win the game, but rather by what margin.

Immediately after this, the heavens opened and the swamp was lashed with a tropical rainstorm that reduced visibility and lowered the effectiveness of missile weapons.  Again, Mary could hardly have been more lucky in shooting just before this happened! 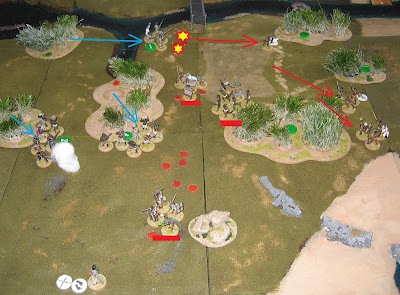 The Sikh soldiers followed this up by fixing bayonets and charging across the creek in an attempt to eliminate their shocked enemies.  They were nearly successful in this, though one warrior escaped their wrath.

Meanwhile, native scouts were racing towards the jetty to try and stop the expedition from reaching this [i.e. the most lucrative of the 3 objectives].  Even if they had to act as speed bumps, they had a reasonable chance of delaying Mary's men enough to prevent them from claiming this goal.

At this point, Mary's forces had found 3 of the 4 possible green "discovery" tokens.  There were still 3 green tokens left that could be investigated, but according to the scenario 2 of them would be curses.  Ujuwa's men decided that the odds of success were too slim to take a chance on this, even though they were very close to the relevant terrain areas. 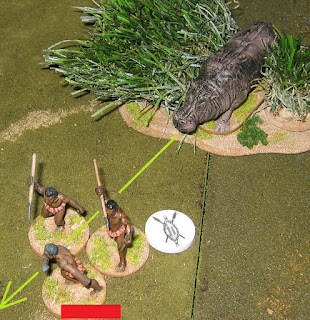 As the Sikhs charged towards another damaged enemy group, their shouts disturbed a nearby hippopotamus.  The enormous creature appeared from nowhere, stampeded through the tribal scouts [who were too canny to be caught by this attack]... 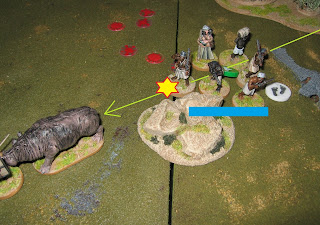 ...before splashing through another marshy area and crashing into Mary's surprised ascaris.  One of these men was trampled to death before the animal lost interest and vanished into the rainstorm as suddenly as it had appeared. 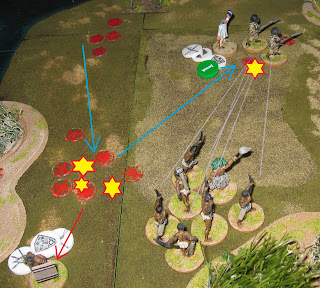 After having cut a swathe of carnage through the few remaining warriors, the Sikh soldiers started to take some casualties themselves - not least from the tribal bowmen [the only part of Ujuwa's forces to be still relatively potent].  Deciding that they had done enough - and needing to protect their green "1" discovery - the soldiers retired out of range. 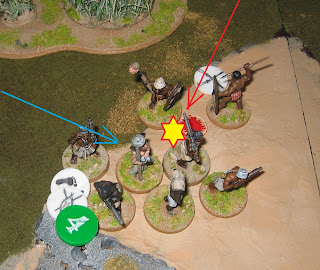 Mary and her bodyguard of 4 ascaris [less the one that had been squashed by the hippo] thought that there was nothing to stop them from simply marching up to the jetty and flagging down the steamer.  In desperation, the last 2 tribal warriors in the area charged forwards and assegaied her bearer and one of the musketmen. 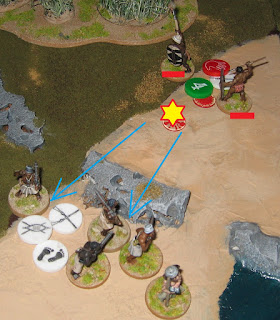 With this surprising defeat, the ascaris scrambled to retreat behind some nearby rocks.  In their haste they left behind the green "4" discovery token, much to Mary's disgust.  She spent the rest of the game making multiple attempts to rally them and retake the item from Ujuwa's men, but without any success.  Possession of this discovery was one of the few successes that the witch doctor had in this game.

[Aurgh!  Blogger has published a partial, earlier version of this article.  I had typed the entire report, but it's been truncated from here onwards.  I will rewrite it in due course - in the meantime, please accept my apologies for the rather abrupt ending... Update now complete, but I will leave this paragraph here as a reminder] 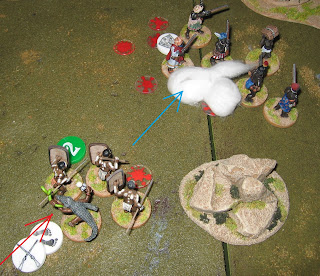 Shortly after this, Ujuwa's bodyguard attempted the same trick.  Their surprise attack drove the ruga ruga backwards a few paces... 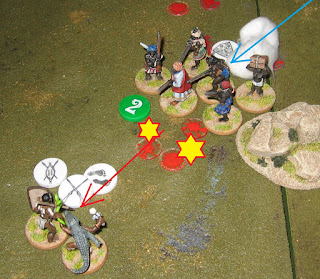 ...but the fierce mercenaries counter-attacked immediately, slew several tribesmen and retook possession of discovery #2.  Even though they were then targeted by the tribal archers and lost several men to arrows, the ruga ruga survived until the end of the game and scored victory points for intermittent control of the second objective [pile of stones]. 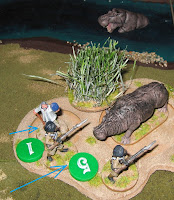 In an attempt to find the last remaining discovery, the Sikhs and the doctor ventured into one of the remaining areas of unexplored marsh.  All they achieved was to activate a curse [green token #5] and to startle another large hippo.  The enormous animal crashed away through the undergrowth without hurting anyone else. 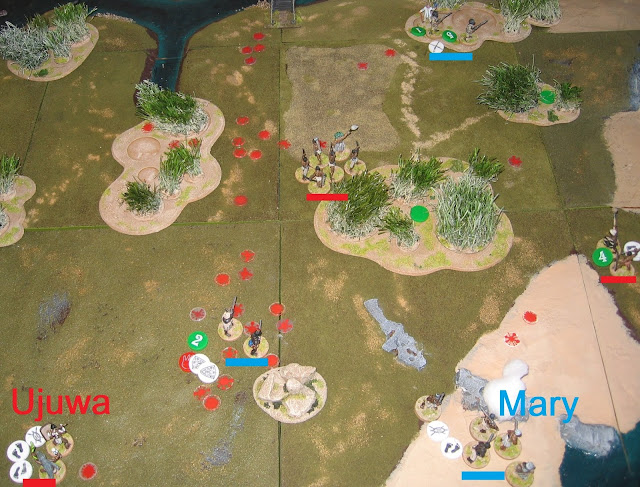 As the game ended, we were astonished to see how the various survivors from both sides were scattered and intermingled.  Also noteworthy is the distinct line of casualties running from north to south across the board.  The crocodiles will feed well tonight! 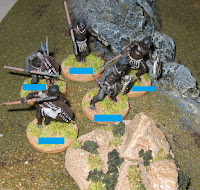 Overall, it was a crushing victory for Mary, who also made 2 useful campaign discoveries.  At least Ujuwa had a consolation discovery of his own.  Without this, the game would have been a complete walkover!

There were some casualties amongst the characters and auxiliaries; this is the first time that such an event has happened in one of our campaign games.  Specifically, one of Mary's bearers was slain and Ujuwa's soothsayer was injured and is now poorly.

Finally, many thanks to Steve/Ujuwa for being such a good sport and playing through the rest of the game in good humour even after the desperately bad second turn.  It's not easy to maintain such composure when all one's hopes and dreams are crushed so early in a game!
Posted by Colgar6 at 16:13