Test of Honour: The Takeda

In January this year, I showed off my Oda Clan samurai and their followers.  Since then, I've added a few figures to them, but that's not what I'm going to talk about here.  Instead, this will showcase my Takeda, my second "Clan" force for the Test of Honour game and (in my gaming world, at least) mortal enemies of the Oda.

All my Test of Honour forces have their own base colours, so that they can be more easily identified during a game.  The Oda are all done in black and white armour & insignia, though clothing and other items will vary.  My ninjas are in black (well, it's traditional), whilst my bandits & ronin are in drab browns and greens.  As you will see, the Takeda use red and yellow as their "signature" colours. 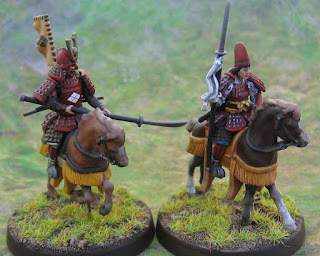 I now have a few mounted troops; these are being slowly painted up as Oda, Takeda and bandit warriors.  This pair are the widow Naoko, the red lady of the Takeda and Shigetsuna, her faithful castellan. 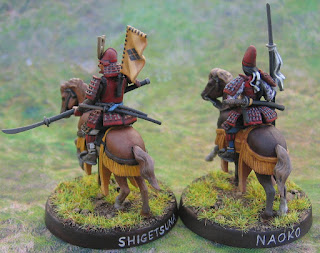 I've just realised that both of this pair are armed with naginatas.  The next pair (still on the painting table) have a bow and a spear - so I haven't modelled any of the Takeda horsemen with just a sword.  I guess it doesn't really matter; Test of Honour doesn't make a huge distinction between different melee weapons.

I now have 4 foot samurai for the Takeda, 2 armed with katana, one with spear and one with naginata.  Since a game only requires 1 hero and (typically) up to 2 lieutenants, this does give me a choice of appearance and weaponry. 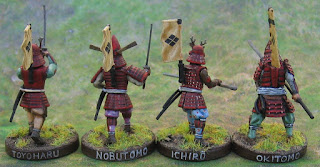 The first 3 models from the left are all Warlord Games plastics, whilst Okitomo (at the right hand end) is from Footsore. 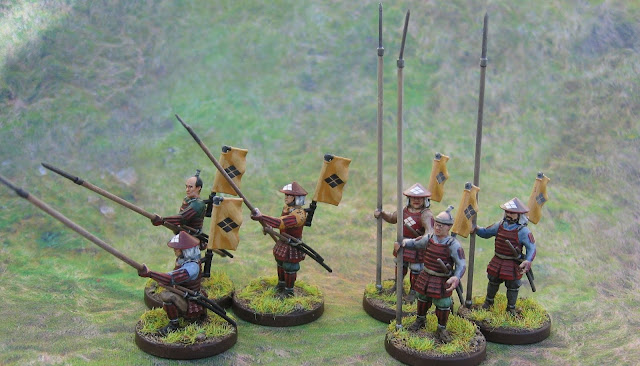 All my spearmen for this clan are plastic models from Warlord Games.  As others have documented repeatedly, these are a real pain to assemble and are somewhat fragile when built.  Indeed, I can see that one of the spear tips is broken already... 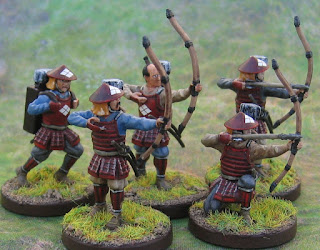 My Takeda archers are - guess what?  More Warlord plastics... 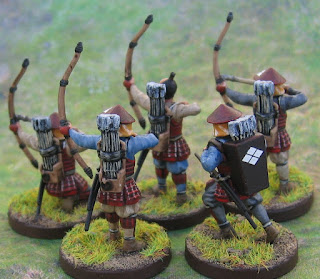 At least the bowmen are a bit more robust than the spearmen, though just as fiddly to construct.  Note that I've modelled one of these as an ammunition carrier; he's useful as the "3rd man" in a Test of Honour group.

Now for something slightly different.  I have a group of 3 musketmen for the Takeda and these models come from Perry Miniatures.  They're single-piece castings, relatively cheap and absolutely gorgeous sculpts. 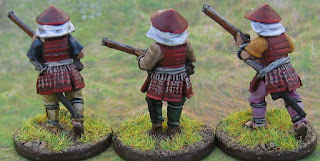 Anyone who examines the Perry range will know that infantry like this usually come in packs of 6 models.  In this case, the other 3 musket ashigaru have joined my Oda clan and therefore have black & white liveries. 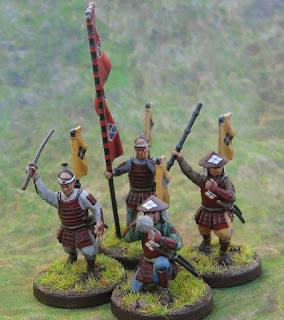 Finally, here are some "special" ashigaru models.  There are 2 sergeants, one conch-blower/musician and one standard bearer. 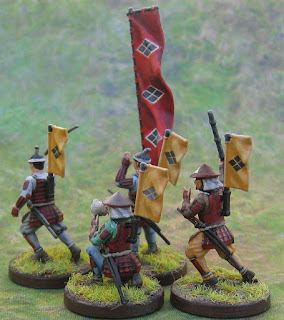 Unsurprisingly, these are all Warlord Games plastics.  At least the plastic is a benefit for the very tall standard, as a metal flag would probably make the figure very top-heavy and liable to topple over all the time.

If I were starting over for this period then I think I'd probably stick with Perry Miniatures for the clan forces.  Indeed, I also like their Ninjas and they have many figures usable as bandits as well.  The Footsore figures are fairly good, but I've had some slight issues fitting 2-part models together.  While the plastics are cheap & versatile, the Warlord models are just too fiddly and fragile for me.

However one thing's for certain: I will still be expanding my Test of Honour forces for quite some time to come!
Posted by Colgar6 at 19:34