It's Zomtober again!  This is quite a lot of work for me, but I do still enjoy the event all the same.

For any new readers, here's the deal: a loose group of hobbyists agree that each will produce at least one zombie-related model each week during October.  More information including the rules (such as they are) can be found >> here <<.  It's a way of encouraging each other to be more productive...

This is the 7th year that I've been part of Zomtober (wow, really?).  Rather than just produce one model each week, I decided right from the outset to paint both a survivor and a zombie and then pose them as a "duel".  This leads to the interesting question: "what happens next?".  Sometimes it's obvious, but on other occasions there is much discussion without commentators reaching any general agreement...

Just in case anyone is interested in old stuff, here's a catalogue of previous years (or at least, Week 1 from each year.  Weeks 2, 3, 4... can be reached by following the links from each year's start entry):

Ryan vs the Cheer Squad 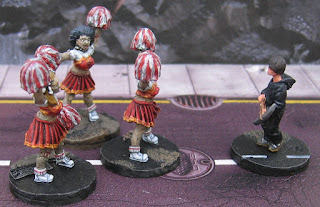 This year, my first Zomtober entry has not just 1 figure or even 2 figures, but 4 models in a "duel". 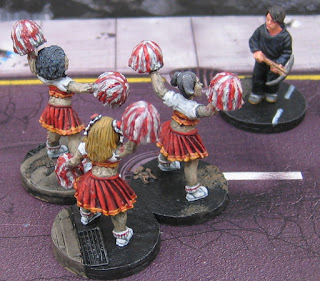 Ryan was a fairly average high school dropout.  He liked to dress all in black and would blame the rest of the world (especially kids of his age group) for his own inadequacies.  Never once in a million years did he think that one of the good-looking, popular girls would so much as notice him, at least not without an expression of disgust or mild amusement. 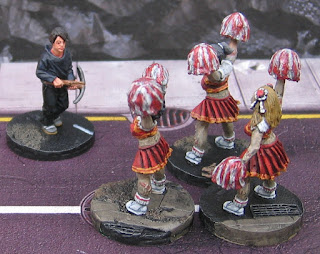 And yet, here were 3 of the cheer squad (the most athletic, well-groomed girls in school) approaching him!  Knowing his luck, this was probably not as good as it seemed. 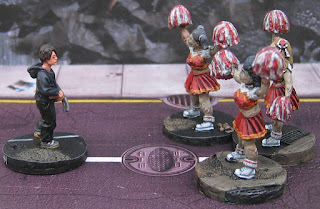 Ryan may have rejected formal education, but he wasn't stupid.  He knew that the zombie plague was rampant and that society was falling apart.  That was why he had his home-made crossbow with him - just in case he met anyone hostile.  The weapon was small, lovingly built (machine shop was the only class in school that Ryan enjoyed) and probably deadly, though he had never actually shot anyone with it - yet. 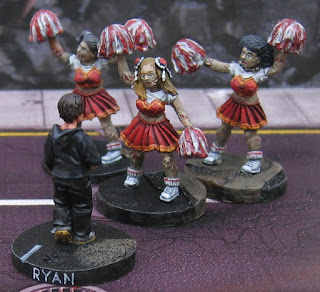 There was just one problem.  Ryan had spent so much time and effort on the weapon itself that he hadn't made much ammunition.  He had just a single bolt - and there were 3 zombies approaching.  He hadn't even considered the need for a knife or other backup weapon.  Maybe he wasn't quite as smart as he had thought... 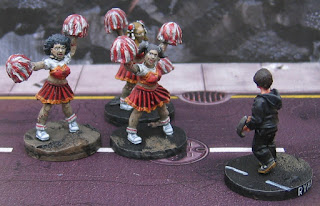 I thought that the cheerleader zombies came from Bombshell Miniatures, but I cannot see them on that site.  Maybe I'm remembering this incorrectly?

Whatever their provenance, I extended their costumes a bit with green stuff, as the models were showing too much lower boob for my taste.  It didn't look at all plausible to me (though arguably, anything with "zombie" in the title is somewhat implausible right away...).  They still have bare midriffs, which is quite enough and a bit more "realistic". 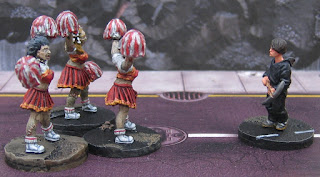 Ryan is one of the street kids from Offensive Miniatures.  The bases are all green-stuff press moulds generated from a Basius II pad.

So, what happens next?  Ryan has one shot only; even if he manages to fell a zombie with that then there will still be 2 cheerleaders left to attack him.

He could take to his heels and run - if so then let's hope that these are the slow-moving, groaning type of zombies.  Otherwise, it'll be a close run thing between 3 athletic ex-girls and one not-particularly-fit young man.

Perhaps the cheerleaders are still trying to perform a routine and can be distracted or avoided?  After all, their continued grip on their pompoms suggests that they haven't gone totally feral.

So, what you you think?