This is a rather delayed account of our 5th game in the Mungo Mah Lobeh campaign using the Congo rules.

Earlier games in the campaign can be found here:
Game 5 in the campaign was actually played last September - some 4 months ago - and I've been putting off the account since then.  Ah, well, here it is now: 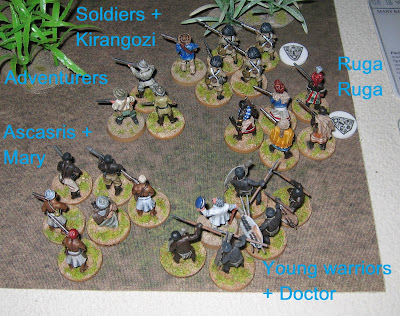 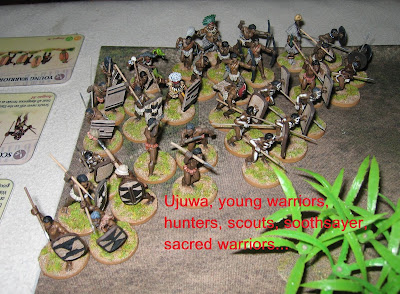 I'm not so familiar with Ujuwa the witch doctor's band.  However, I do know it has the following in it: 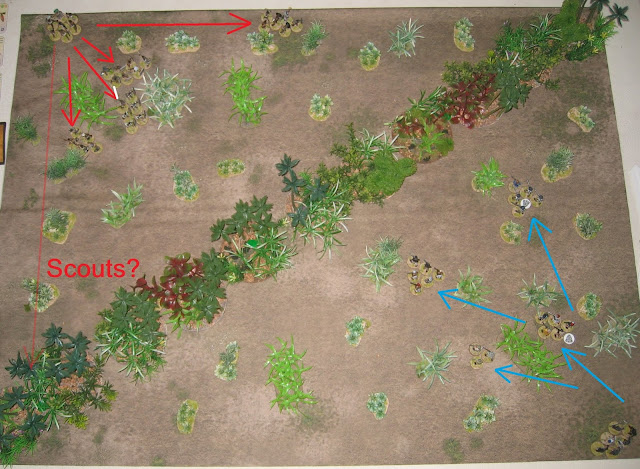 From the start, it looked as if the 2 sides had slightly different strategies.  Mary's column advanced fairly close together, aiming slightly away from the centre of the table.  On the other hand, Ujuwa's forces spread out to try to cover the entire length of the jungle.

Note that I cannot actually see Ujuwa's scouts in this picture, or indeed in most of the others!  I know that they were present; they played a small - but significant - role in the forest tribe's achievements and I know that they ended up in the jungle at the bottom left of this picture.  I can only assume they've moved so fast that they are hidden in the foliage already. 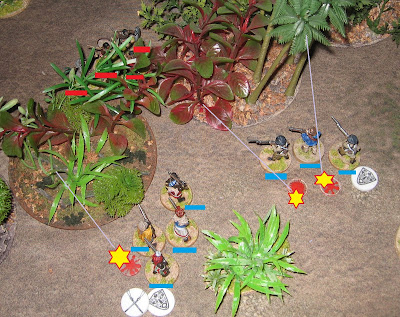 Hostile Fang tribesmen roamed about in the treetops, taking potshots with their poisoned blowpipes at anyone who came close.The first to feel their wrath were Mary's ruga ruga and (especially!) her soldiers. 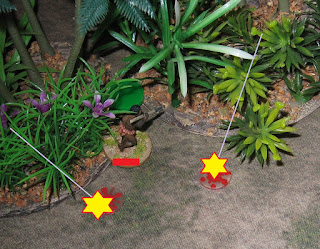 Initially, The Fang were quite even-handed.  They also shot down 2 of Ujuwa's 3 scouts, leaving just a single quivering man holding on to one of the all-important discovery tokens. 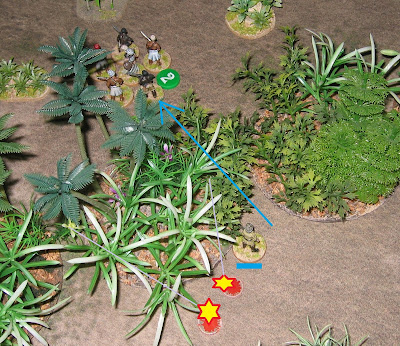 Finally, Mary and her ascaris passed through the tree line without problems.  The adventurers who tried to follow were not so lucky: in a disastrous piece of bad luck (for Mary!), 2 of the 3 adventurers were hit and fell. 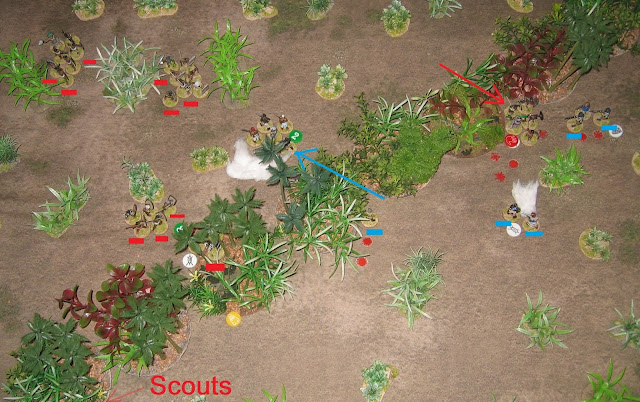 Mary and her small bodyguard of ascaris exited the jungle.  They were pleased with themselves for having passed unscathed and for having made a discovery en route [i.e. the #2 green token].  However, the way ahead was full of Ujuwa's tribesmen. 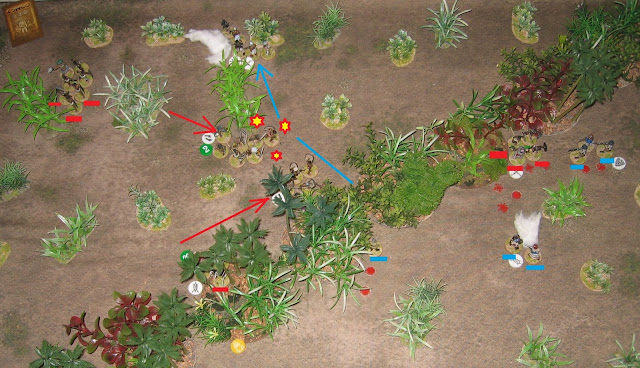 The ascaris attempted to skirt around the bands of warriors, but were caught when Ujuwa and his force attacked them.  Mary's force fled without taking any casualties, but were forced to drop their discovery. 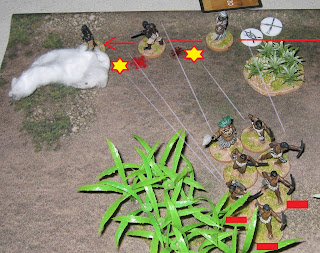 From this point on, Mary and her ascaris ran for the corner as fast as they could.  This seemed to catch the tribesmen somewhat flat footed; none of them managed to intercept the white woman and her friends.  [Ujuwa's group had acquired a Movement stress token and didn't have the right card/dice to rally from it, whilst the other warband wasn't well positioned to attack].

At the last moment, the chieftain ordered his archers to shoot at the strangers.  It was a damaging volley, but not enough to halt the ascaris. 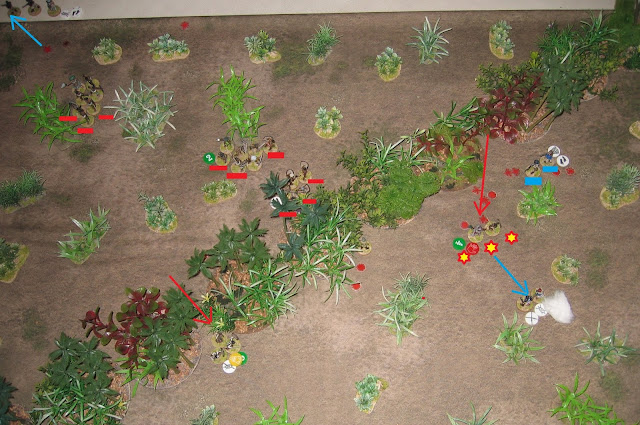 With one last bound, Mary and her ascaris left the table, thus securing a guaranteed 15 victory points for her side.

At the same time, the furthest-advanced tribal warband bludgeoned its way past the ruga ruga.  Casualties were heavy on both sides.

The last of the white adventurers also fell at this point, though I forget whether he was a victim of a Fang blowpipe or whether he was assegaied by a passing group of warriors. 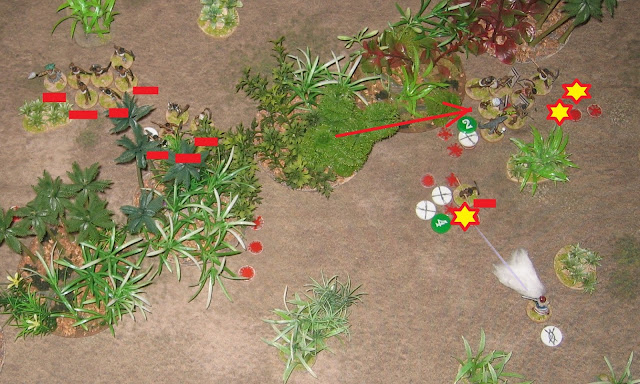 Since the tribesmen now outnumbered the expedition considerably, they rushed forwards.  Ujuwa's band came through the jungle unhurt and fell upon the 2 remaining soldiers and their accompanying kirangozi.

In a small-minded act of petty revenge, the last of the ruga ruga shot the tribal soothsayer.  Amongst other things, this left a single warrior guarding the #4 objective for the tribal forces. 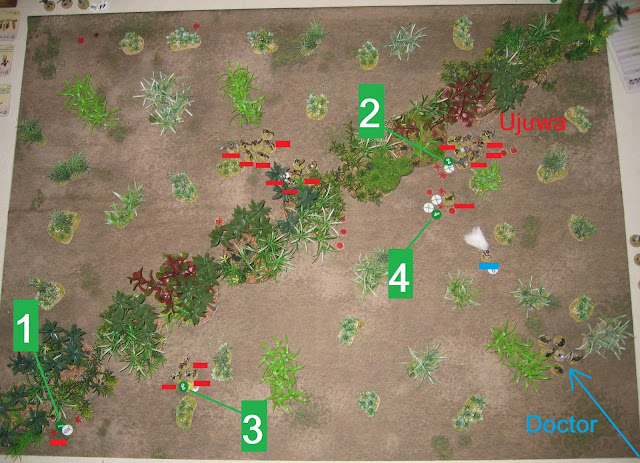 At this point, the forest tribe held all four discovery tokens, as well as a loot counter [I forget how this was picked up - probably it was from a random event].  Excluding the items for which random victory points are awarded [i.e. loot and knocking out enemy characters], the scores so far were:


In other words, it looked very tight, but probably a minor native win. 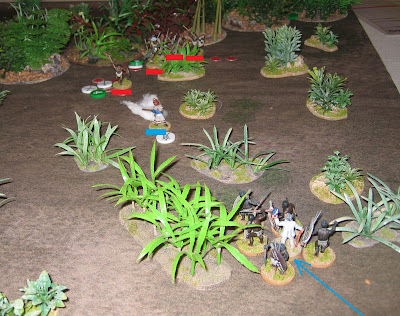 The doctor [who hadn't moved at all up to this late point in the game] thought he saw a chance of reversing this.  It may not have been good odds, but the lone warrior with the #4 objective was an easy target - if the doctor and his followers could catch the tribesman. 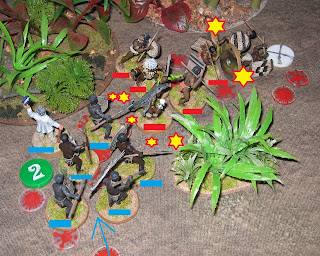 Unsurprisingly, the lone warrior fled when he saw the doctor's band approaching.  However, Ujuwa had to use his only movement card for this - and that meant his own band [with the #2 discovery which had been captured from Mary earlier in the game] was in range.

As a last, desperate, do-or-die action, the doctor and his band of young warriors charged Ujuwa and his group of warriors.  Even though slightly outclassed, the expedition's force triumphed, drove Ujuwa back and re-captured the #2 discovery.  Hurrah! 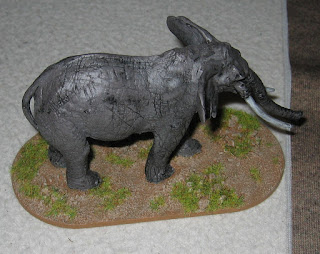 Finally, here's a picture of my elephant.  This was the nominated wildlife for the scenario, but no-one drew an animal token for the entire game.  The poor beast never made an appearance and is still waiting in the sidelines...

That was a very tense game, with the tribesmen [mostly] rampaging through the expedition's forces.  At the conclusion, Mary had just one unit left [i.e. the doctor's young warriors] plus a single ruga ruga, whilst Ujuwa had at least 4 units and a lone scout.  The Fang cannibals accounted for a lot of Mary's forces, especially the better quality groups such as the adventurers and the soldiers, leaving them easy meat for the tribesmen to finish off.

However, like all scenarios of Congo, victory isn't about destroying all the enemy forces.  So, what's the total?  Who won?

So, it's a very narrow victory for Mary's expedition, achieved in the last act of the game by the unlikely success of the doctor's desperate charge!  Ujuwa has every right to feel robbed by this; I expect he's plotting a terrible revenge for the 6th and last game in the campaign!