Among my purchases at Carronade 2021 was a model giant; part of the Reaper "Bones" range.  I stated at the time that I intended to paint him up for use in games of Frostgrave.  Well, I finished this model a few weeks ago and have finally managed to find enough time & enthusiasm to post a quick article, so here he is! 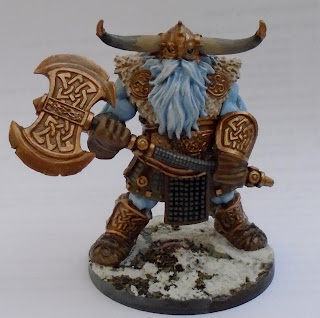 I suppose I could have painted this model in human flesh tones - probably as a pale Caucasian rather than anything else.  However, I really wanted to mark him out as something different - a creature firmly rooted in the icy wastes.  To emphasis this, I chose a cold, pale blue for the skin and an even paler blue for his extensive beard and hair. 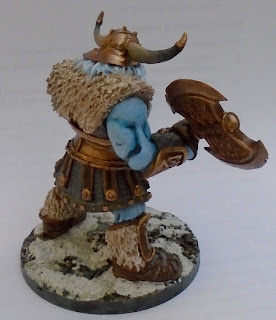 As a warm contrast (and to avoid iron), I used gold, brass and bronze for the metal parts of the giant's armour and weapons.  The non-metallic parts of his equipment are a dark grey. 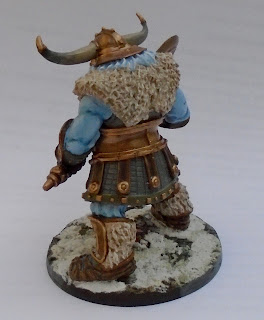 Finally, the furs he wears around his shoulders and boots are also very pale.  I think the paint I used for the middle highlight (i.e. the one which adds most of the colour) was called "linen" or something like that.  Whatever it's name, it is a very pale brown with just the slightest hint of green in it. 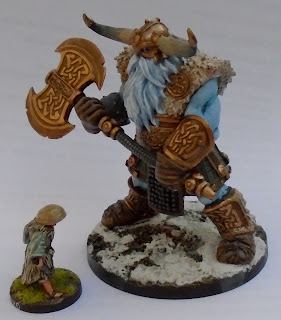 So, just how "giant" is this model (I hesitate to call it a miniature, because it really isn't - at least when compared to most of my other figures)?  Well, here's a photograph of the frost giant alongside a 28mm human.

As you can see, he's maybe 2.5 or 3 times taller than a man; also this giant is very solidly built.  I'm really glad that this is a plastic (PVC?) model, as if he were metal then the figure's weight would be substantial!

I've wanted to have a frost giant in my collection for some time.  Well, now I've got one!  The model was relatively cheap and (I think) painted up nicely, with only a slight bend in the shaft of his axe to hint at the soft plastic material.  He'll do nicely!