Over 2 years ago, the Helensburgh Alternative Hobby Association (HAHA) set out to run an escalation league for SAGA.  We managed the first two of our planned monthly meetings, in January and February 2020 - then Covid-19 struck.  Since then we have been through lockdowns, isolations and other inconveniences, but as of a few months ago we re-started our event.  This is a momentous post, because WE FINALLY COMPLETED THE LEAGUE!

For descriptions of the league rules and the five planned events, see here:

The plan was always for a climactic, every-man-for-himself battle at the end of the league.  In this, each player would field the entire 4-point SAGA warband that he (or she) had collected over the duration of the campaign.  Although we started with seven or eight players, due to the lengthy delays we only finished with four.  The others had all moved away from the area and were unable to continue participating.  I hope they are still enjoying SAGA as much as they did in the first two events, wherever they are now!

Usefully, the SAGA "Book of Battles" has a scenario for exactly the kind of grand, chaotic game we had envisioned: it's called "Battle Royale"!  This scenario has an alternating placement anywhere on the table.  Victory conditions revolve around Survival Points and successful charges.

We read the rules slightly incorrectly and gave the VP only for a charge which caused more casualties than were received, rather than any charge that made contact.  In the end this wouldn't have made any real difference to the results, though. 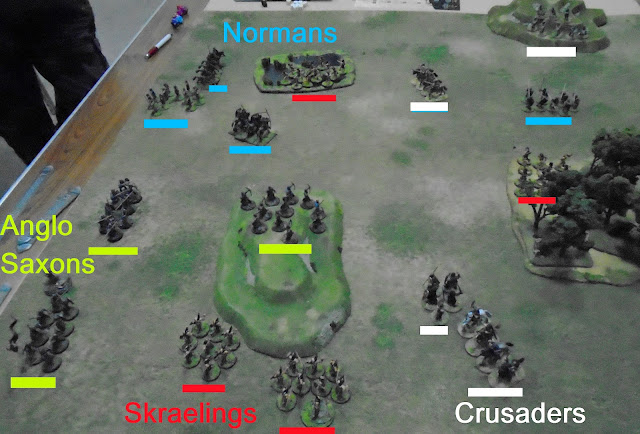 Initial placement was quite simple: the Skraelings filled the marsh and the wood with bowmen, planning to move all their warriors onto the hill (and not appreciating that the gentle hill gave no defensive bonuses at all).  The Anglo Saxons, Normans and Crusaders mostly kept to themselves and deliberately didn't interleave with their enemies. 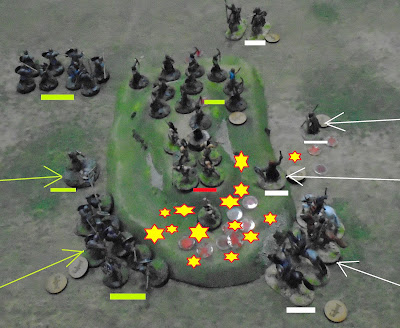 Much of the action in our game revolved around the foreground hill.  Although the Skraelings climbed it, they were then sandwiched and harried by both the Crusaders' and the Anglo Saxons' elite troops.  Skraelings don't do too well when defending and their forces just melted away. 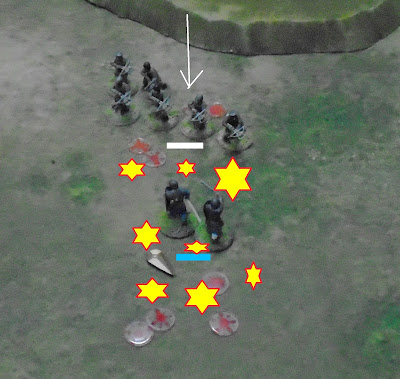 The other early action was between the Crusaders' crossbowmen and the Normans' spearmen.  The crossbows proved deadly, both at range and in melee (though by the time the melee occurred, there weren't too many spearmen left!) 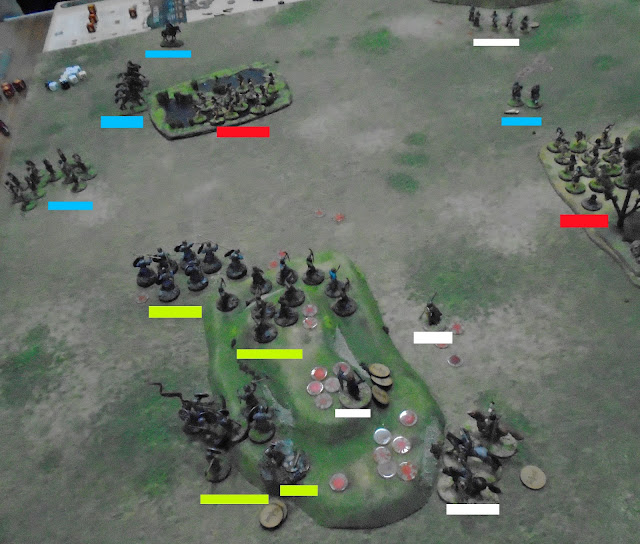 Little action occurred elsewhere, except that the Norman archers' volley fire was a constant, if minor irritant to anyone in range. 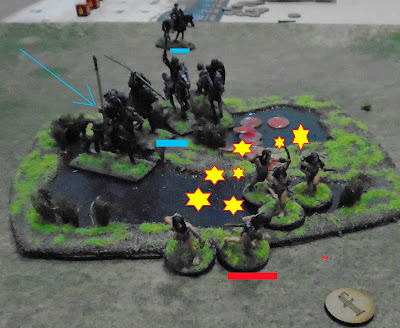 Finally, the Norman knights decided that they'd find out how squishy the nearby Skraelings were.  It turns out that the swamp didn't slow down the knights enough to save the archers and yes - the Skraeling levy were exceptionally squishy. 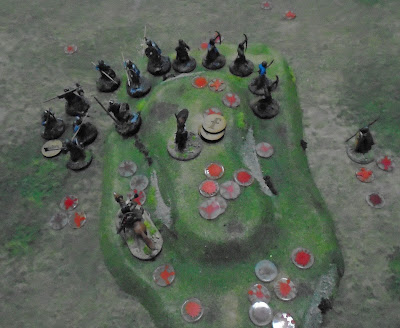 The game ended after fierce fighting left the Crusader warlord as "King of the Hill".  He had triumphed over all opposition, including all the Skraeling warriors, their warlord, the Anglo Saxon chief and all of his hearthguard.  He did have a little help in doing this, but the Crusader lord had been all but unstoppable!

For this particular battle:

After all the points have been added up, the standings are as follows:

Congratulations are due to the Anglo Saxons, who won 3 of the 5 rounds outright and thus achieved an unassailable number of league points.  They are the champions!

It's been a long campaign, but we finally got there.  I'm immensely pleased that we completed the schedule, whilst at the same time I'm saddened that it took so long and that we lost so many participants along the way (again, not due to lack of interest, but rather because "real life" got in the way).