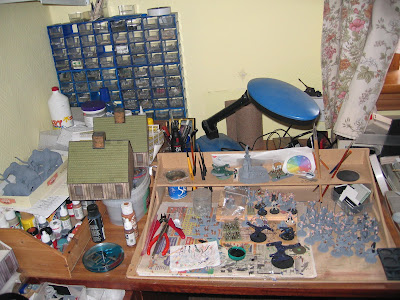 I've not been doing much painting recently and stuff is beginning to pile up on my workbench.  It really needs to be tidied up properly, but I haven't managed to muster enough enthusiasm for that.  How many of us are scrupulously tidy and how many let things get out of hand?  I don't know, but this is a snapshot of the items on which I'm working just now. 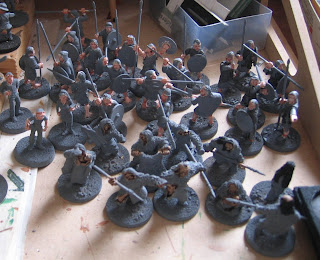 Here's a large collection of undercoated figures, with flesh and eyes painted. 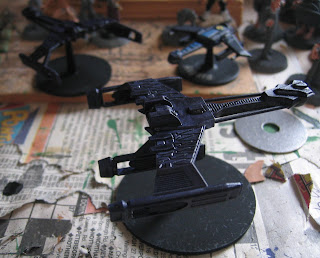 Moving along, here's a very recent purchase: a couple of large "not-Klingon" starships from Studio Bergstrom.   I've wanted these for some time, to help flesh out my small fleet of medium-sized "Klingon" ships from Irregular Miniatures.  One of the latter can be seen at the rear right, for colour reference.

Behind the Klingon ships we have some more Reaper figures. 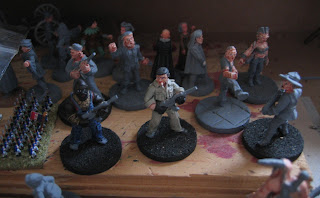 The back of the workbench has a mixture of part-completed stuff on which I haven't worked for some time.  It's a real medley; there are several Golgo Island characters, 3 of the 4 Foundry A-team members (I don't have the 4th), a bunch of Mega Minis medieval civilians (for a Robin Hood game or as spectators for a joust).  Also some 6mm French Napoleonic infantry from Ros and Heroics; these are actually finished but have been brought out of storage to act as a colour reference for more of the same. 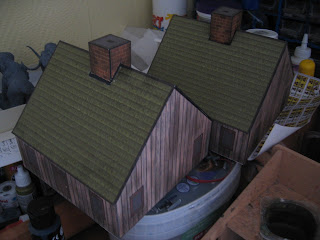 To the left of the workspace (on top of my paints) are 2 completed cottages for the "Golden Hills" retirement complex.  These are from Stoelzel's Structures, though I have scaled them down to have 6" walls.  I've also added my own wallpaper and flooring and some furniture from various WorldWorks kits, as I found the accessories that came with the kit a bit mixed in quality and scale. 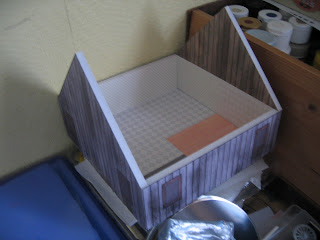 In front of the completed cottages is a part-built one (this is number 3 of the 4 that I plan to make).  The house doesn't have its chimney stack or any of its interior walls (or even the interior windows and doors to correspond with the exterior ones).  However, you can clearly see the different flooring and wallpaper for the 3 rooms it will have. 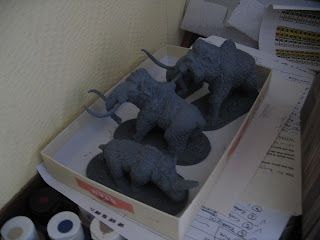 Finally, behind the cottages are some prehistoric mammals from Primaeval Designs.  There are 2 mammoths, 1 elasmotherium and a bison.  These are so simple to paint that I really should finish them off soon!

So there you have it: what's on Hugh's workbench at the start of July 2012  If I do this again in maybe 3 or 6 months, it'll be telling to see which models haven't progressed any.  I'm sure that some of the stuff near the back hasn't been touched for several years.  Ah, I can't be the only person in the world with good intentions - but all too many real-world distractions!