TRWNN: The Shootout at Big Whiskey

It's the last week of the school summer term here in Helensburgh.  Since the Games Club doesn't operate during school holidays, that means it's the last club game for a couple of months.  In one way, this is a blessing - it removes the pressure to come up with something that will keep all the kids' attention every Tuesday evening.  But it's also a sadness and a disadvantage, since it cuts down on the amount of material I have for this blog.  Ah, well - perhaps you're all tired of my game reports!  Anyway, I can still play games at home, or write other types of article.

So, this week I chose The Rules With No Name (TRWNN).  These are a popular set of rules for Hollywood-style Old West skirmishes; one notable feature is that characters are moved only when a corresponding card is drawn from a deck.  Therefore, a player cannot predict when (or even if) in a turn his models will get their actions.  Certain wild cards can be saved by some classes of character and played at any point to allow an extra turn, even if this interrupts someone else's turn! 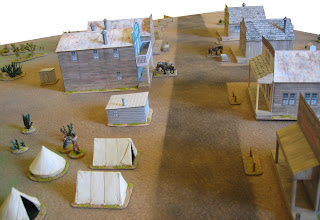 "Big Whiskey" is a rather small town somewhere on the edge of civilisation.  Oddly, the buildings are made of wood rather than adobe brick, even though it's in an arid part of the continent.  The town has a saloon, a sheriff's office, a few stores and not much else - just the usual stereotypes, really.

On this particular high noon, 4 groups of men would fight it out.  There were 2 loose alliances, but the winner would be determined as the player on the winning alliance whose group had taken fewest casualties.  So no points for hurting the opposition directly!

So, what were the factions?


Right from the start, the Banditos retreated around the broken-down corral, probably because they were a bit nervous of the Posse's crazy preacher with the sawn-off shotgun! 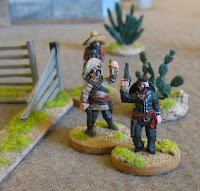 First blood went to Emmett.  The notorious Outlaw (near foreground) took an aimed shot at Sheriff Roberts (far distance) at extreme pistol range and managed to graze him: 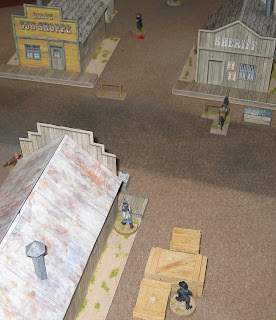 The Mexican Banditos scurried for cover as the Posse's crazed preacher Adams decided he was invincible and strode past the building, singing hymns as he came.  Jesse, the other member of the Posse, followed the minister, unsure what to do.

At the other end of the main street, Sheriff Roberts marched across the road and felled Injun Joe with a blast from his shotgun.  By rights he should then have been an easy target for Emmett, but the Outlaw was too hasty and his gun jammed. 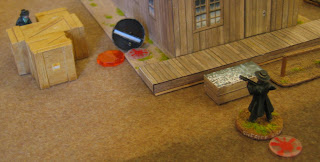 Deputy Eddie thought this would be a good time to help his boss, but all he managed was to trip over his own feet and fall down.  Meanwhile, the sheriff calmly reloaded his shotgun while Emmett frantically tried to unjam his gun. 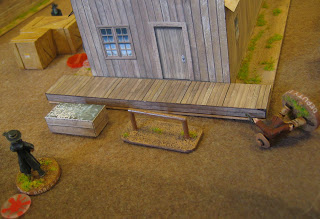 Preacher Adams continued round the Trading Company store, proclaiming that he was armoured in faith and couldn't be hurt!  Juan (the Bandito's wannabe) was overawed and just stood there, gaping... 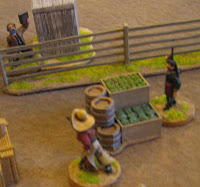 ...but Santos was made of sterner stuff; he shot down the ranting madman.

Emmett was in a tight spot, with his gun busted, 2 Lawmen approaching and his companion (Injun Joe) down.  However, he got lucky and drew 3 cards at once: 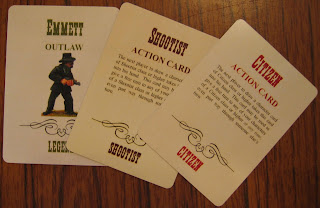 Emmett ran from the sheriff and round the back of the saloon.  His rather desperate plan was to attack Jesse from behind and take his gun, before returning to deal with the lawmen.  Jesse was peering round the corner of the goods store, trying to see what had happened to Preacher Adams.

However, Emmett's luck ran out when he rolled very poorly for his charge and before he had covered half of the distance, Jesse spun round and shot him.  The wound wasn't serious, but it was embarrassing to be caught in the open like that, trying to sneak up... 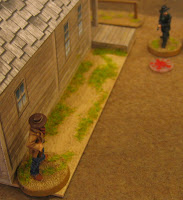 ...especially as Sheriff Roberts was doggedly following Emmett along the street, shotgun loaded and ready! 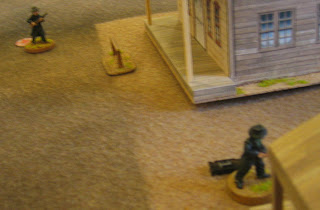 Out of the blue, Rico (the Bandito's drunkard) turned aggressive.  He vaulted the fence and charged Jesse from behind.  Such was the ferocity of his attack that he even knocked the big man over!  Juan attempted to come and aid his fellow Bandito, but couldn't manage to climb the fence in his cowboy boots (failed the dice roll 3 times in a row, if I remember correctly). 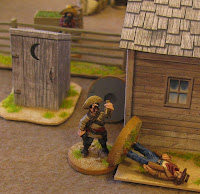 Back at the Dry Goods store, Injun Joe staggered to his feet despite his wounds.  He tried to fire at Deputy Eddie, but missed.  The Lawman fired back, but jammed his gun.  He then charged the wounded man and was still wrestling with him at the end of the game. 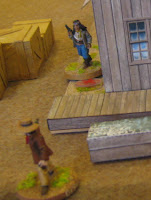 Emmett skirted the punch-up between Rico and Jesse, now intending to go for the preacher's shotgun.  Santos had just made sure that Preacher Adams was out of action for good and was hovering indecisively, wondering how to intervene in the fist fight.

It looked as if the bad guys might win, when 2 things happened one after the other.  Firstly Rico, the drunk, backed out of his fight with Jesse and passed out.  Then, the sheriff came marching up and aimed his shotgun at the cluster of bad guys between the outhouse and the store. 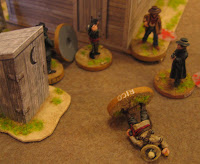 He fired at point blank range (Sheriff Roberts had collected a wild card that permitted him to take another turn immediately) and this one shot changed the balance of the game completely.  Emmett was killed outright and Santos was wounded severely and knocked out.

So, who won?  Here are the standings of the factions at the end:

By my reckoning, the Good side won.  Of the Good factions, the Lawmen had less severe injuries and are therefore the winner. Order is restored in Big Whiskey, if only until the next game!
Posted by Colgar6 at 22:45