For my non-zoologist, younger readers, who didn't study Latin or Greek at school, "megafauna" means "giant animals".  During the last Ice Age, a number of species of mammals grew to extraordinary size, possibly as a defence against predators.  Many of these were contemporary with early man, though in at least some cases the men were then responsible for hastening the extinction of such large sources of meat.

My interest in these creatures comes from tales such as "The Lost World", where they might be encountered by Edwardian explorers.  Potentially, megafauna provide some of the more dangerous encounters for such groups; they are difficult to kill with hand weapons (short of specialised, heavy rifles) and can be very destructive if aroused.

First up, here is a small herd of Megaloceros.  I've included a Neanderthal hunter to act as a size reference; megaloceros could easily have an antler spread of 12 feet or more!  The 2 models on the left are from Primaeval Designs; the one on the right is from Steve Barber Models (look for "25/28mm Ranges", then "Prehistoric Animals"). 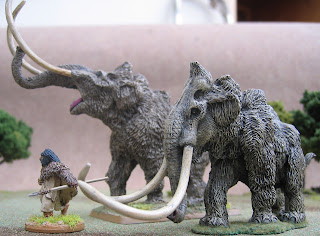 Here's something everyone associates with the Ice Age: wooly mammoths!  This pair are from DeeZee and are still available from NorthStar, I think. 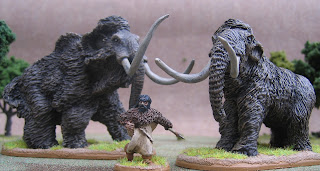 ...whereas these two are from Primaeval Designs.  They are somewhat bulkier than the DeeZee ones, but much the same height.  I acquired these at a much later date and so the basing is a bit different.  Also the colour scheme doesn't quite match.  I just regard them as older (or younger) individuals, but still the same species! 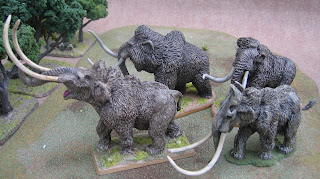 Finally, here's a shot of the whole herd.  Note that the long, curving tusks make these a real problem to store; they don't fit neatly into any size or shape of box!

Our poor Neanderthal has encountered a pair of Elasmotheriums (Elasmotherii?).  These are a variety of giant rhinoceros, though not the possibly more famous Wooly Rhinoceros.  The full-grown adult on the left is from Primaeval Designs, whilst the frisky juvenile on the right is a DeeZee model.

Some of the strangest animals on the planet (at least, to Northern eyes) come from South America.  Here are a couple of examples:

Glyptodon is a giant armadillo; early man probably used their shells to shelter from bad weather.  This example is from Steve Barber Models. 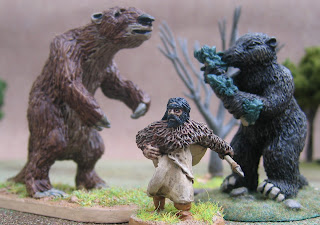 Finally, here are a pair of Megatheriums (Megatherii?).  The smaller version on the right is an early Steve Barber model and isn't much to my taste.  The larger model, on the left, is from Brigade Games (the US company, not the similarly-named but unconnected UK company "Brigade Models").  This is much better, in my view: both the size and the general shape of the animal are closer to the historical data!

All of the above mammals were contemporary or near-contemporary with early man; it's not perhaps too much of a stretch of imagination to have an isolated group encountering Victorian or Edwardian adventurers, or even modern man, in some remote part of the world.  I've even used some in a science fiction game, as the denizens of a primitive world being explored by a Klingon away team!

For gaming purposes, I believe that most megafauna that are not familiar with man should have considerable behavioural differences from their smaller brethren.  These are animals that are pretty much immune to predators, at least when fully grown.  They will therefore tend to react aggressively to any puny human who attempts to molest them.  At least, that's what I've tried to convey in my "Attributes for Animals" house rules for the "Adventures in the Lost Lands" rules.

The most comprehensive list of models of prehistoric animals suitable for wargaming is undoubtedly Steve Pugh's "Very True Things".  I'd like to thank Steve for making this data available; it's a very useful resource!

Finally, for those of you that are impressed by scale: a fully-grown mammoth might be 10 feet tall.  But, sticking with mammals, if your adventurers go back 30 million years or so then they might meet a Baluchitherium instead; this could be 16 feet tall and weigh 18 tons!

I think we're going to need a bigger gun...