The First of the Zombie Vixens!

It was my birthday last Friday and amongst the socks and handkerchiefs, my loving family gave me a box of Wargames Factory's latest product: the zombie vixens.
Technically, I had bought this myself, but when the wife saw them delivered just a day or two before my birthday, she snaffled the box and hid it so that it could be gift-wrapped and handed back to me on my special day.  Mind you, it's a good way of ensuring that I get what I want!

This isn't going to be an in-depth review of the product; if you're looking for that then I apologise in advance.  Instead, it's just an initial reaction and my first 2 painted examples.

Others have already described Wargames Factory's packaging for this particular product as "lurid".  I completely agree with this assessment and am slightly despondent that they felt this to be an appropriate selling point.  After all, female zombies would make up roughly half of the population, wouldn't they?  I known that I've been wanting more variety in my collection and I imagine that a number of other zombie gamers have also been awaiting this set for the same reasons.  There's no need to try to invoke necrophilia!

The models themselves are definitely on the skinny side (no pun intended).  Most are acceptable as reasonably healthy young women (well, before they became zombies, obviously!), though the one in the evening dress is much too anorexic for my liking.  My main concern here is that the finished figures may prove fragile in use.  So, they're not perfect - but I'll make the models up and use them anyway, won't I!

This model is based on the body described elsewhere on the net as the "I need to pee" pose.  For a zombie, odd poses can be accepted, but this one certainly looks a bit strange.  Note that the high heels are incredibly thin; technically this box is much more advanced than Wargames Factory's first efforts. 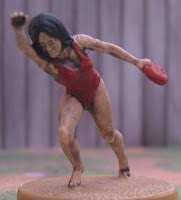 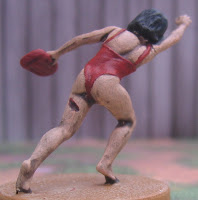 The lifeguard is in the "Superman" pose.  Also a bit strange.  I wondered at first whether this body was intended to be a crawler, but it doesn't really work for that.  Perhaps I'll make the other copies of this pose climb over an obstacle or something like that.

So now I've got another 28 "vixens" to paint - 34 if you include the bonus crawlers.  Just when my painting desk was getting back into some sort of order.  And there's Studio Miniatures' plastic zombies to come soon as well.  Should keep me going for a bit...
Posted by Colgar6 at 19:58