In the previous game (here), the small community at Golden Hills was scattered by a huge horde of zombies.  As this happened, a couple of members were out scavenging for supplies, unaware of the destruction of their base. 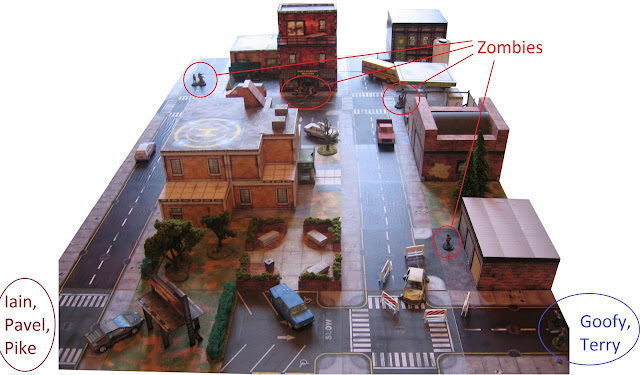 Goofy (survivor, REP4, Shotgun, knife) and Terry (survivor, REP4, unarmed) are out searching for food and weapons to take back to the Golden Hills community.  They are on a standard "scavenge" mission (though that will probably change at some point as I pull the rug from under the players' feet!).

There were 4 players present for this game; obviously we needed some extra characters beyond Terry and Goofy.  I decided that another small group of scavengers would enter from another corner.  It remained to be seen whether they would help or hinder the 'main' characters or simply ignore them.  The other group were: Iain (civilian, REP4, cricket bat), Pike & Pavel (civilian, REP3 Star Trek re-enactors, effectively unarmed): 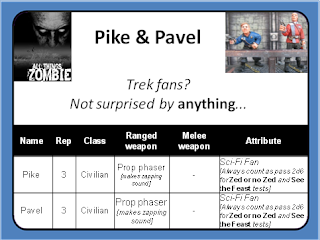 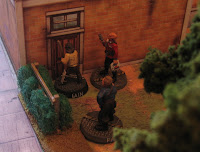 To start with, Iain, Pike and Pavel ran over to the side door of the police station.  Iain tried the handle.  "It's locked!" he said, sounding surprised.
"Can we break it down?" asked Pike.
"Maybe" replied Iain, uncertain.  "But surely there must be easier ways to find some loot?" 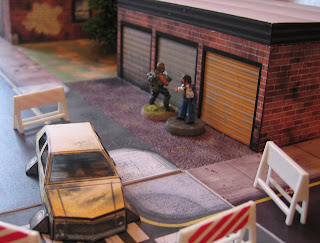 On the other side of the road, Goofy and Terry went along the row of garages, testing each door as they went.  This was a bit cheeky as there was a zombie standing motionless in the middle of the street.  It was looking towards the police station and didn't see the two men (wrong line-of-sight and lots of poor zombie activation rolls!)  Nevertheless, Terry kept a sharp lookout whilst Goofy tried each handle.  All the units were securely locked, so they didn't find anything useful.

By this time, 2 of the 3 PEFs (Possible Enemy Forces) on the board had been resolved as just nerves, though the encounter level had been raised from a comfortable 3 to a nerve-wracking 5.  In this context, it was not too surprising when a random event occurred.  Using my event deck, it was resolved as Foresight, thus allowing the players the advance knowledge that the 3rd PEF was just litter blowing in the breeze.  Indeed, the town became very quiet and even though it was early afternoon, the streets darkened as storm clouds began to cover the sky. 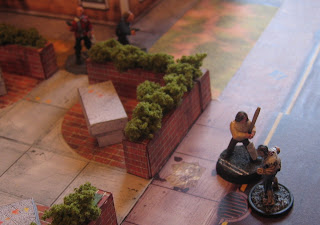 The players were all feeling confident now that the PEFs had all been removed as a threat.  Iain, Pavel and Pike came round to the front of the police station, intending to walk in through the front door.  As they did this, they saw the lone zombie standing in the street.  The group conferred briefly, but decided that they had to deal with the creature before moving any further.  "Come on!  Let's get it!" called Iain as he charged forwards.  However, both Pike and Pavel failed their citizen's "brown pants" rule and stopped after a few steps.  Iain didn't even notice that he was alone as he ran up and delivered the perfect swing; with a sickening crunch he flattened the zombie. 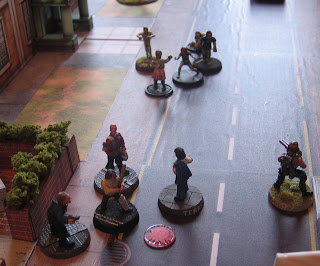 Terry strode across the street to congratulate the stranger, though Iain was preoccupied with the sudden realisation that his buddies had bottled out; he barely acknowledged Terry's words.  Before any further arguments could occur, Goofy called out "Heads up, guys!  We're not alone!".  The zombies were finally on the move down the street and a small mob was approaching fast. 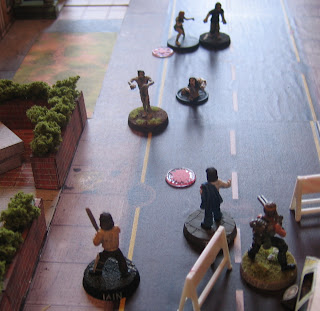 The humans started to back up the road slowly.  As he went, Goofy fired several shotgun blasts.  Even though he felled a few zombies, the noise started to attract larger numbers of them to the area. 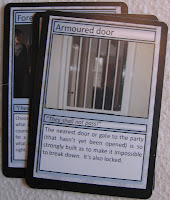 Another random event occurred; this time it was obvious that the main door to the police station was completely impassable.  The men could only guess at what might have happened inside that building to require fortifications of that magnitude, but right now they didn't have the leisure to let their imaginations dwell on the subject. 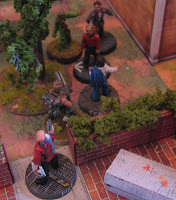 Terry and Goofy, followed by Pike, decided to run back round the police station.  They hadn't realised that a large mob was coming up the alley from that direction and they were taken completely by surprise when the first zombie attacked them.  Terry didn't get a chance to utter a sound as one of the creatures grabbed his head and broke his neck (Eww!  Terry lost the melee by 1 point, but the zombie then rolled the '1' necessary for an 'obviously dead' result). 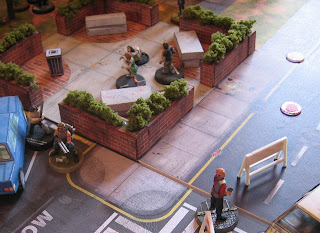 In shock, the remaining humans ran from the scene, whilst the zombies congregated on the warm corpse to feast. 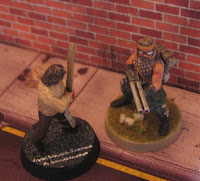 Iain and Terry found themselves together, hiding down the side of the block of garages.  "Where are Pike and Pavel?" hissed Iain.
"Who?" replied Goofy.
"My friends...did you see what happened to them?"
Goofy didn't answer.  He wasn't much of a talker at the best of times and the sudden death of his friend had unsettled him. 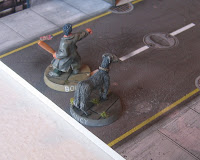 Unknown to both men, just at this moment Bomber and Clancy arrived at the far end of the table (Bomber is a REP6 survivor with brawling, shotgun and baseball bat; Clancy is a REP6 Irish wolfhound).  They had come as fast as they could from Golden Hills to find Terry and Goofy.  Although Bomber didn't know that some of the residents of the retirement home had been left behind in the scramble to evacuate, he still thought it important for the scavenging party to return immediately.  He had no idea what he was walking into.