DBA: The Defence of Heshbon, 700BC

In 700 BC, the Assyrians under King Sennacherib were laying siege to the Hebrew town of Heshbon.  As well as 2 armies of their own, the attackers were supported by a large contingent of Midianite Arabs.  However, the Hebrew King Hezekiah had gathered 2 armies of his own, plus a force of Kushite Egyptians.  These marched to defend the town; battle seemed inevitable. 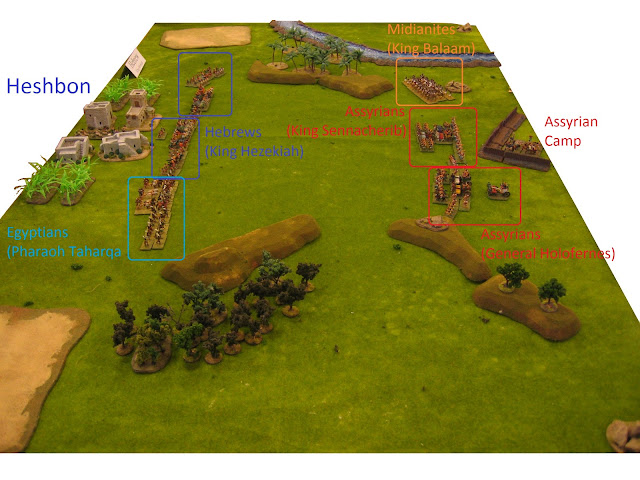 This is a fictional encounter to give justification to a game of DBA that I hosted this week at the Helensburgh Games Club.  The town, the armies involved and the named personalities did all exist in the same region and in the same time period.  However, the notion that they all came together for this particular fight is hypothetical.

We had 6 DBA armies (12 elements each) and a total of 8 players!  Models are from my ageing 15mm collection. 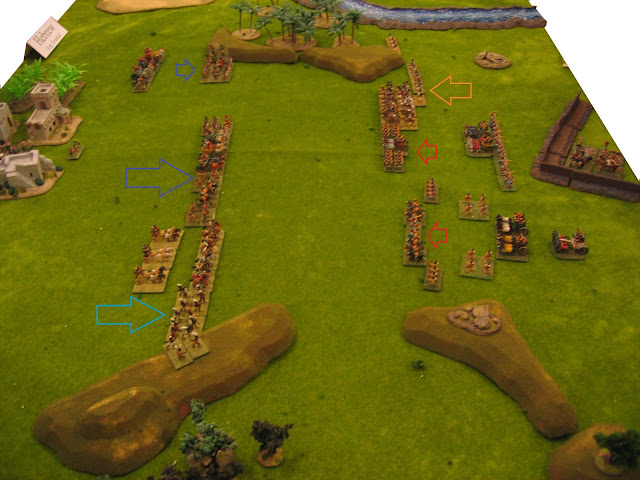 Right from the start, the Hebrew central army and their Kushite Egyptian allies advanced rapidly.  The other Hebrew army (top left) was a bit indecisive and just moved some of their infantry forwards a little.  However, it looked as if the Assyrians had been caught napping by the arrival of the relief force.  Their armies hadn't deployed very efficiently to start with; now the Assyrian commanders compounded this by spreading their troops over even more ground.  Only their Midianite allies (top right) looked at all coherent. 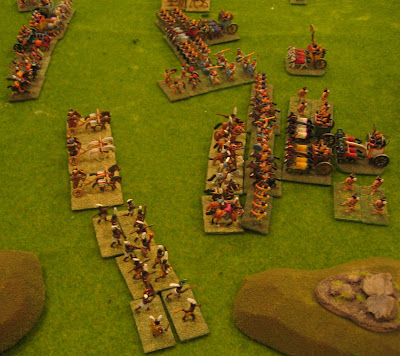 The Kushites were the first to make contact, as their cavalry charged the forces of General Holofernes.  Although the Assyrians had made some attempt to restore order to their lines, they now looked more like a traffic jam than an organised fighting force.  Units in the second line were misaligned badly with those in the front line, thus preventing any of the latter from retreating (in DBA, a unit is destroyed if it is required to recoil and cannot).  Also, many units were not in contiguous blocks; it would be harder to give orders to them separately. 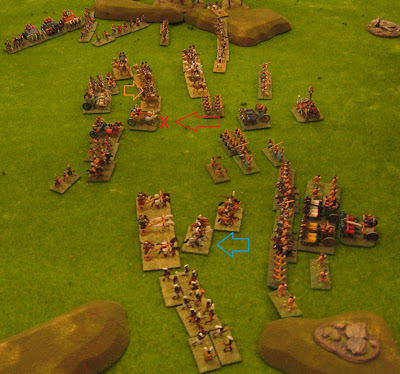 The Kushite cavalry were handled roughly: 1 base was lost and the others were repulsed.  On the other flank, Balaam's camels tried to charge the Hebrew heavy infantry; predictably they were forced back.  A lone Assyrian chariot saw King Hezekiah's chariot at the front of the Hebrew army.  Its opportunistic charge (centre top) was brave but futile and the Assyrian unit was destroyed, though not without giving the Hebrews a bit of a scare! 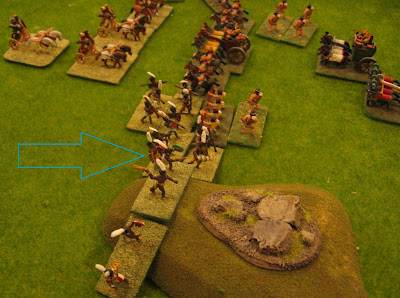 The decimated Kushite cavalry made way so that their chariots could pin Holofernes' mounted troops.  Meanwhile, the wild Kushite tribal infantry swept over the light Assyrian infantry on the wing and threatened to outflank the entire army! 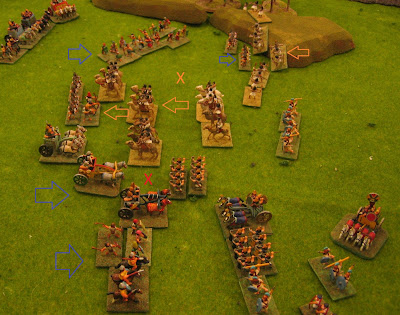 At the same time, the rest of the battlefield resounded to the sounds of weapons against shields, horses neighing and the rumble of wheels as infantry fought, camels spat and chariots made passes at their enemies.  A couple of Hebrew heavy infantry units (top) prevented all of the Midianite infantry from advancing down off their hill.  Wave after wave of Midianite camelry crashed against more Hebrew infantry (middle), but they were repeatedly repulsed by the determined spearmen.  The camels also started to take some serious losses from the Hebrew archers.  The Hebrew chariots, cavalry and assorted infantry (bottom) advanced steadily.  The Assyrians threw the odd chariot in their way, but without support these only served to slow the advance down a little before they were destroyed. 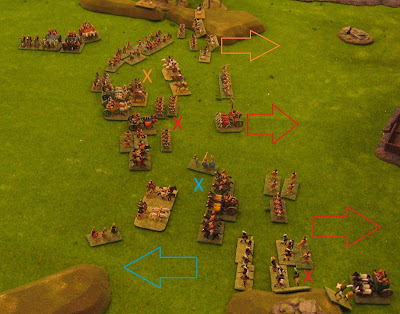 Then, in a single round, it was all over.  The Assyrian General Holofernes tried personally to stem the Kushite warriors.  He almost succeeded, but was swarmed by them and killed (bottom).  At the same time, one of the Kushite chariots was trapped and lost (lower centre).  Yet another of Sennacherib's chariots was wiped out (middle) and Balaam's camels suffered grievously at the hands of the Hebrew archers (top).  In a single combat phase, 4 of the 6 forces passed their break points and became demoralised!  The 2 Hebrew armies were the only ones left with any fight in them. 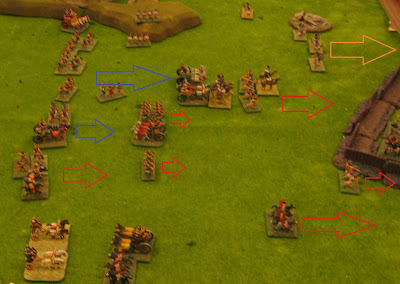 The broken Kushites and some of the Assyrians were too exhausted to move (i.e. their commanders threw a high enough number of PIPs to hold them where they were), but the remainder of the Midianites and many of the other Assyrians fled as fast as they could.  Hezekiah and some of his Hebrew chariots pursued, picking off the stragglers with glee.  The only thing that prevented the rout from becoming a massacre was that many of the Hebrew mounted troops were not well positioned to join in the chase.  The city of Heshbon was saved and the population rejoiced, at least for now!