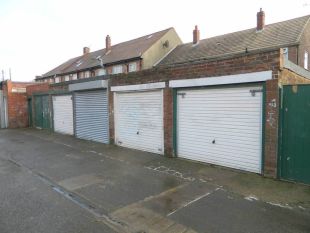 Lock up garages are a common sight in UK towns, often near the slightly older suburbs or housing estates.  They are typically arranged as a detached block, not directly connected to any house and can be found in back lanes or small areas of what would otherwise be waste land.  I don't know if such buildings are found anywhere else in the world, though perhaps any overseas readers could tell me one way or the other. 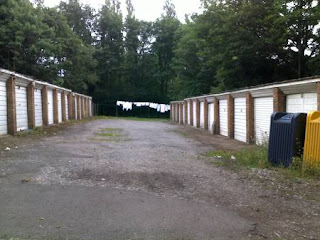 Originally they were intended for local residents whose properties were too small to have their own garage, but now they might be rented for other purposes.  I've seen local building & construction firms store spare lumber in a lockup, as well as hobbyists who keep a sailing boat or occasionally-used motorbike safe.  Lockups are even used occasionally to store the corpse after a particularly gruesome murder, though that's very much one of the less common things to put in them! 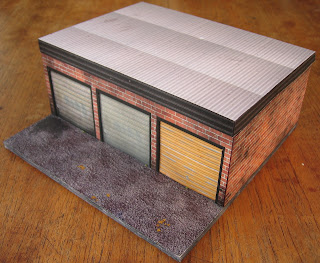 This is my paper and foamcore model of a lock up garage.  It's mounted on a 7" square tile and could easily be extended by adding other similar units to the sides and/or facing the doors.  This model is a kitbash; it draws heavily on the Armoury from Worldworks Games (the old Armoury kit, not the newer TerrainlinX one; though that might work as well). 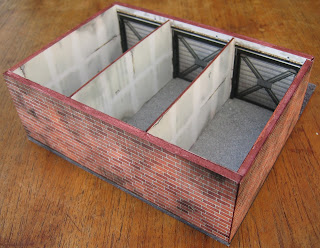 The inside of the model is divided into 3 separate units.  For these, I just resized the walls and door from the repair shop that comes in the Worldworks Armoury kit.  If I was being adventurous then I could have decorated them with shelves, toolboxes and other such clutter, but I suppose I was lazy in this respect.  The floors are simple concrete textures; I cannot remember if they too are from the Armoury kit or from elsewhere.

The outside walls are also taken from the Armoury kit.  In this case, I've chosen to resize a plain brick texture for the sides and rear, though it would be entirely appropriate to have graffiti on some or all instead.

The front wall is probably the most heavily-modified piece.  It started as a plain brick wall, but I've added 3 door frames from the Armoury's garage, somewhat resized.  However, I wanted to make this block look old and tatty and so I didn't want the doors  themselves to be identical.  2 are from the Armoury kit, though one has been lightened up a bit.  The third door is a texture that I found on the internet and resized & cropped appropriately.  I found that searching Google for "metal siding" was the best way of finding such images, though even then it took some effort to find exactly what I wanted. 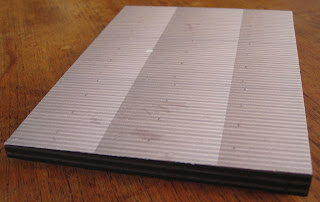 I made the roof for all 3 garages as a single piece; I felt it would have looked messy to create separate covers for each.  This piece is somewhat complicated because I've given it a slight slope from front to back.  Fortunately, my trigonometry is good and it wasn't too hard for me to work out the correct measurements and angles; if I'd been less confident then a flat roof would have been easy and would have worked almost as well.

The sides of the roof are covered with a pattern from a Worldworks kit (can't remember which), somewhat extended and reshaped.  I think they were some form of roof edging originally, so they work well for this purpose.  The roof itself uses more "metal siding" textures. 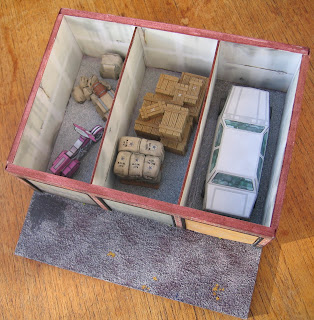 In games of All Things Zombie, I class each garage as a separate building for the purposes of discovering items or people.  Probably this is a bit generous; it's not that likely that you'd find people in such a storage area.  However, you might find all manner of common stuff, such as building materials (for barricades), cars (possibly part-dismantled!), large tools or who knows what else?