The planet of Tantalus III was recently the scene of a violent confrontation between a group of Klingon spies and a patrol from the Planetary Defence Force (PDF): here.  PDF troops have scoured the area but have been unable to find either the insurgents or several of their missing soldiers.  The local army headquarters have come to the conclusion that the Klingons must have a well-camouflaged underground base and have ordered that acoustic probes be installed to cover the area, in order to discover the location of this base.  They couldn't be more wrong... 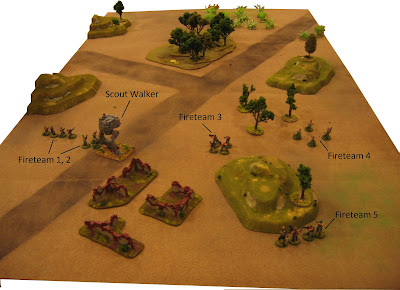 5 teams of the Planetary Defence Force were deployed to install acoustic sensor probes.  3 of these teams were experienced (REP4), whilst 2 groups were rookies (REP3).  3 troopers in each team carried a gauss rifle.  The 4th member had a light support weapon of some kind - mostly chain guns with the occasional rocket or grenade launcher.  The platoon also had the services of a lightly-armoured "Valkyrie" scout walker with REP 4 crew members.

The rules for installing the acoustic sensor net were simple.  A team would take an entire activation to deploy a sensor, each sensor would have an effective radius of 18" and the PDF would "win" when every part of the board was in range of at least one sensor.

Just to keep the players on their toes, I deployed 3 PEF (possible enemy forces) markers.  2 ended up in the large wood in the centre and the 3rd was behind the far right hill.  Unknown to the players, these PEFs were all decoys that would resolve as "nothing there".  The real threat came from underground... 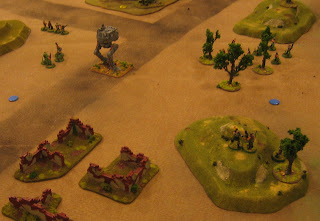 To start with, the troops advanced slowly, dutifully emplacing sensors as they went (the small, blue markers).  2 of the 3 PEFs moved into sight and were discarded, leaving just a single, stubborn PEF in the woods, refusing to move.  The players quickly realised that the near side of the table wasn't covered adequately by their sensor grid, so team 5 dropped back to fill in the gaps. 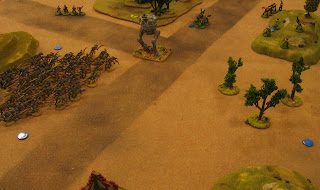 After a number of sensors had been positioned, the combined activation dice came up as a '7' and I dutifully placed a bug hole.  Twice as many bugs as troopers were indicated, so 48 in total (counting the walker as equivalent to 4 people).  That's a lot of bugs! 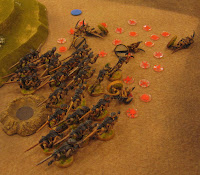 The players panicked for a moment and the walker "buttoned up" (shut and locked all its hatches!), but quickly the troopers decided to use their firepower.  It turns out that 5 fireteams with automatic weapons can kill about 15 or so targets that aren't under cover every turn.  I'm not counting the walker because throughout the game its gunner rolled very poorly; its vulcan gun barely claimed 1 victim per turn.  The bugs froze for a couple of turns (missed activation rolls);it began to look as if the troopers would finish off this swarm without even breaking a sweat! 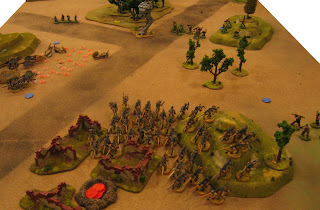 Of course, we then rolled another '7' for activation; a second bug hole appeared amongst the ruined buildings.  This time, 96 bugs emerged.  I promptly ran out of models and had to resort to placing I.O.U. counters (each red marker is worth another 10 bugs).

The troops didn't even get a chance to move before another swarm of bugs arrived.  This time they were flyers and they arrived right behind team 5.  Indeed, team 5's position now looked extremely precarious; they were sandwiched between the aerial newcomers behind them and the huge swarm in front of them, just the other side of the hill! 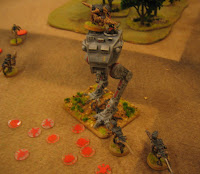 While this happened, the walker advanced in an attempt to stomp on the remaining bugs from swarm A.  Two of the critters leaped out of the way, while a third scuttled nimbly up a leg and onto the top of the vehicle.  The airwaves went blue as the vehicles's commander called for assistance into his comm unit.  "Get it off us!  Someone, please - shoot it off!  All fireteams, target the Valkyrie!  Ah - just small arms, though - don't use the rocket launcher!"  Fireteam 4 duly hosed the scout down with its minigun (and killed the beastie) before they ran further up the road. 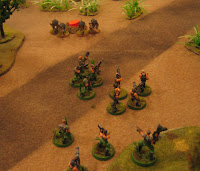 Teams 2, 3 and 4 then fled up the road, followed some way behind by team 5.  The huge swarm B and the winged swarm C hadn't yet reacted to this when a 4th group of bugs appeared - this time almost straight in front of the fleeing soldiers.  Some days it's just not worthwhile for a squaddie to get out of bed.  Again, the red tokens are each an I.O.U. for 10 more bugs; I really ran out of models badly in this game! 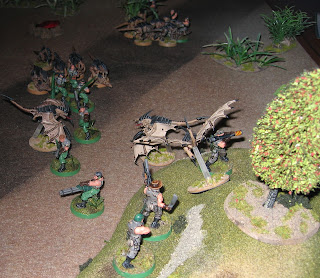 The soldiers didn't get much further before the monsters were upon them from all sides!  Several men were killed immediately, though interestingly the flying bugs had a hard time against teams 4 and 5.  The specialist in team 2 did surprisingly well against warrior bugs from swarm D; he survived an attack by several bugs by firing his grenade launcher directly down the throat of one of the vicious creatures.

Team 1 was alone on the other side of the wood.  They had an easier time of it because only a couple of bugs found them.  Still, one of those managed to kill a trooper before being gunned down, whereupon the 2nd bug charged and did the same again. 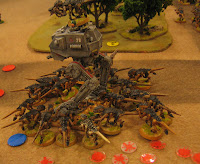 The walker was now in serious trouble.  A large number of bugs assaulted it and even though many were crushed underfoot by the driver's cunning manoeuvres, 10 of them still managed to climb onto various parts of the machine.  It was probably only a matter of time before one of them managed to find a weak spot and disable the vehicle. 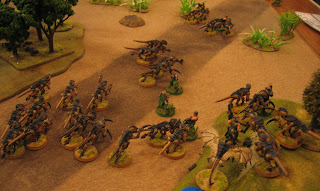 The winged beasties may not have been as deadly as the other creatures, but they did hold up teams 4 and 5 until the ground-based swarm arrived.  As the game ended, it was looking pretty grim for the last few soldiers...

Well, that didn't go as I had expected!  Those "4 times number of humans" swarms are incredibly nasty; once that occurred there wasn't really much chance for anyone who didn't run immediately.  To be fair, the players did run, but then were even more unlucky that more swarms appeared to their sides and in front of them.  Truly, I think that Tantalus III will have to be abandoned to the bugs now!

A couple of members of team 1 would have escaped, had we continued.  Probably.
Posted by Colgar6 at 20:03