I've not done very much model-making recently.  Partly this is the colder, darker season approaching rapidly; it does tend to sap my energy a bit.  Mostly it's just that many of my projects are either near their beginning or are stuck on some hard part.

If near the start of an item then it can be hard to motivate oneself; it seems like such a long way to completion after the initial flush of enthusiasm.  Alternatively, some projects bog down because I cannot figure out how to overcome some technical challenge, or I cannot decide on what end result I really want.

Here are a few of my projects which are currently stalled and awaiting difficult decisions...

I have a bunch of card models to make up, for use with ATZ or other modern urban games.  Firstly, I have the Stoelzel's Big Box Store and Auto Park Playset (and I've just noticed the Trailer Town Playset is available as well, curse it :-) ).  I'd intended to make the buildings from both of these, but just haven't got round to it yet.  I'm also part-way through building some Ebbles/Genet "Folding Unit Structures", for use in a military camp.

I intend also to make a number of the vehicles from the Auto Park.  So far, I've completed one red convertible, so only 124 more pages of models to go :-) !  This is an interesting kit and will be a useful addition to my fleet of vehicles.

Obviously there's more work in building an open-topped car than a covered one, if only because the interior detail has to be done too.  However, it was the windscreen and (surprisingly) the underside that gave me the most difficulties.  Some of the Stoelzel's kits have fairly broad dark lines where the card needs to be folded and because of these it can be difficult to tell exactly where to score and crease the model.  Sometimes, as I found here, any minor inaccuracies didn't show up until many steps later in the construction, when it was too late to rescore and refold the card easily.  I'm particularly aware of the issue this week because I've also been making an Ebbles/Genet shuttle; that kit has very precise score lines and fits together perfectly.

I have an ambition to run a scenario involving an assault on a Starbase.  Part of the setup for such a game would be defensive minefields, but how are these to be represented?

I suppose that the minefields could be represented by counters.  However I'd really prefer a proper, 3-D model.  They'd have to be cheap, of course, if deployed in the numbers that I envision.  But what does a mine in space look like? 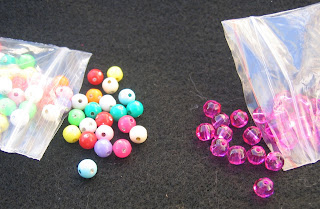 Here's the starting point on which I decided.  These are plastic beads, about 6mm across.  They're certainly cheap; you can buy many 100s for just a pound or two.  But can they be made to look like mines? 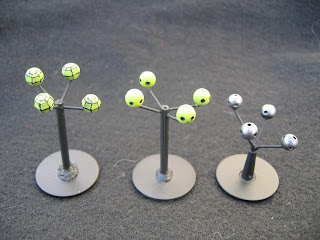 Here are my 3 attempts so far.  The group on the left uses the faceted beads.  Personally, I think they look quite effective - but outlining the facets is horribly time-consuming and not really suitable for mass production.  Bother.

In the middle and right are 2 trials using the round beads, but with different colour schemes.  They're certainly quicker and easier to paint, but I'm still not sure.  I might yet use base them in rectangular strips rather than on round bases.  Or change the colours.  Or give the beads to my daughter and find some other way of representing mines.  Aargh, I just don't know how to proceed!

I've mentioned these guys before, in the context of not making much progress.  Indeed, they seem to be something of an albatross around my neck!  I bought my Viking warband last year and painted it up long ago, but I cannot play Saga until I have some opposition for them. 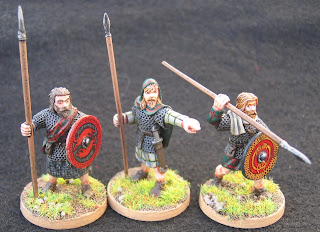 Finally I can report that I have finished 3 of the Scot's Hearthguard.  I've named them "Eochaid", "Ciniod" and "Domnall".  That only leaves the warlord himself, another 5 hearthguard and 16 warriors to go before I have a minimum-sized warband.  I keep telling myself that it should get easier; the less prosperous warriors will have much plainer clothing that will be quicker to paint.  Still, at this rate it'll be a long time before the party is complete :-( .