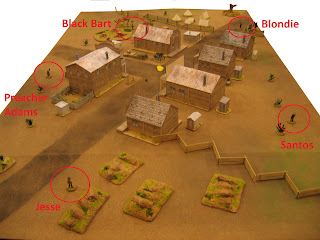 In the small mining community of Silver Falls, a passing wagon has dropped a number of bags of gold in the middle of Main Street.  Probably this was an inside job; some accomplice has infiltrated the company and has surreptitiously thrown the money overboard whilst "guarding" the payroll.  Be that as it may, the sacks of gold have been spotted by a number of local ne'er do wells simultaneously; the one who ends up with the most will win.  There's a slight catch, though - each bag of coins is so heavy that a person can only carry one of them at a time.  Simplest thing is just to kill all the other gunslingers; then all the gold will be yours!

All of the initial 5 characters were either shootist or legend class and each had a number of skills as well.  They were armed with pistols, apart from Preacher Adams (who was crazy and had a sawn-off shotgun!)  Oh, I would be using the Bystanders card in the deck as well, just to make it more interesting!

Straight from the start, Preacher Adams ran into the centre of Main Street and declared that all the gold was his.  This declaration was met with a certain amount of trepidation by the other players; the preacher's crazy attribute and shotgun made him potentially very unpredictable and dangerous!

Black Bart stuck his head round the corner of the store while the preacher was trying to load a sack of gold onto a nearby horse.  He barely ducked back in time as a blast from the sawn-off shotgun tore chunks out of the corner of the building.  Bart would have to spend a turn cleaning the splinters out of his eyes and finding his hat, but at least he was unhurt! 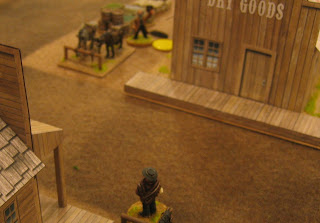 From the other side of the street, Blondie didn't give Preacher Adams a chance to reload.  He blazed away with his pistol; over the course of several activations he managed to score 6 hits before his gun ran empty!  Sadly for Blondie, 5 of these were scored on the horse behind which the preacher was sheltering; only 1 bullet grazed the man.  The horse was killed, though! 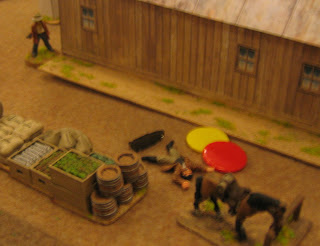 Black Bart recovered his composure and stuck his head back round the corner of the store.  From this angle, Preacher Adams was in the open and Bart put 2 shots into him.  Although Adams wasn't killed, he did collapse and remained unconscious for the remainder of the game.  While Blondie and Black Bart had been gunning down Preacher Adams, Santos had taken a chance to run in, grab a sack of gold and retire with it to the corner of the Trading Company building. 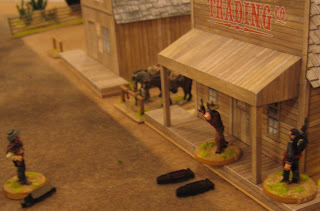 At this point we drew a Bystander card; this was resolved as an old enemy of Blondie's.  2 Gun Rafael burst out of the nearest door and challenged Blondie in a bad Mexican accent: "Hey, gringo!  You killed my donkey!  And my cousin!  And my best friend's uncle!  Now I kill you!"  He blazed away with both pistols, rolling something like 14 dice in total.  When the smoke had cleared, one pistol was empty and the other jammed.  Blondie had only taken a single slight wound, which he ignored due to his Hard as Nails attribute.  Rafael stood there, looking somewhat embarrassed. 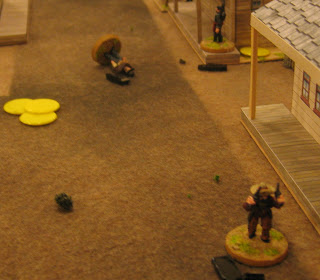 Not fancying his chances at brawling with a legend, Rafael ran down the street to look for a quiet place where he could reload his guns.  Blondie started after Rafael, but his turn was interrupted when Santos shot him twice in the belly.  This knocked Blondie down, but they were just flesh wounds after all...

...so Blondie stood up, reloaded quickly and fired back at Santos.  He hit him in the left arm; this was very bad news for Santos as he wouldn't be able to reload his pistol - and the previous firing at Blondie had emptied his gun.

Black Bart had started forward to claim the gold, but was challenged by Cesar (a newly-arrived henchman of Preacher Adams).  The two of them exchanged many shots from their respective sides of the barrier of produce without hitting each other.  Bart came close a number of times, but always hit the bales of cotton instead. 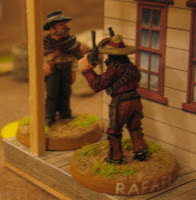 Rafael returned past the saloon, having reloaded and fixed his guns.  He ran headlong into Blondie, who was coming down the street to look for him.  For a number of turns, the pair wrestled, but neither was able to defeat the other (the wounds that Blondie took from Santos were handicapping him considerably, thus allowing the gunman Rafael to fight on even terms).

Finally, Cesar got a lucky hit on Black Bart, causing a serious arm wound.  Black Bart would not be able to reload; for the last few turns he only took slow, deliberate shots as blazing away would probably have rendered him weaponless.

Santos dithered around an outhouse for a while, but finally decided to take his sack of gold and run off (probably to find a doctor to look at his bleeding arm). 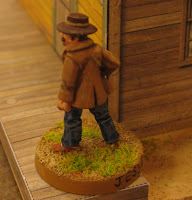 Up to this point, Jesse had hovered indecisively at the southern end of the town, waiting to see what everyone else would do.  He chose this moment to come round the corner and take a long range shot at Rafael (from behind).  Surprisingly, he hit Rafael in the leg and knocked him down - but still Blondie couldn't finish off his adversary and the brawl continued.

Finally, in the last turn of the game, Blondie broke away from his brawl and ran for the money.  Black Bart finally ran out of ammunition and also ran into the centre of the street to stand protectively over some of the sacks.  The 2 exhausted gunfighters were unable to hurt each other and the evening finished with the pair of them dripping blood all over the gold