The Story So Far

In game 6 of my ATZ campaign, the small community of survivors who were living at the Golden Hills retirement complex were scattered and separated.  One elderly couple (Albert and Gertrude) was accidentally left behind, while Bomber fled to the east.  His search for some friends who were out foraging at the time of the zombie attack on Golden Hills was played out in game 7.

Meanwhile, the remainder of the group escaped aboard a convoy of trucks manned by a squad of National Guard, traveling to a resettlement camp at an undisclosed location.  This is their story. 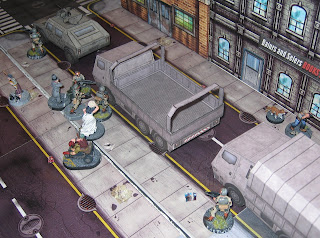 The small convoy was driving along a wide road through the suburbs when Dalton in the middle vehicle signaled a halt.  Lieutenant Costner and Corporal Van Damme walked over to see what had happened.    Dalton spoke: "Flat tyre, sir".
"Nuts.  OK, it seems quiet enough here - we'll change it now.  Get to work, soldier!" the officer replied.
"Lieutenant, my dog needs some exercise" called John from where he was sitting in the back of the truck.
"All right.  Anyone who needs to stretch can dismount for a few minutes, but don't go out of sight!" 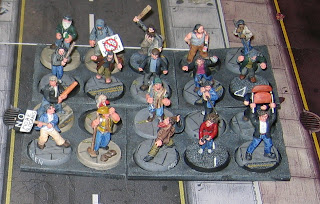 As the survivors walked about and the soldiers started to work on the broken-down truck, an angry mob appeared further down the road. 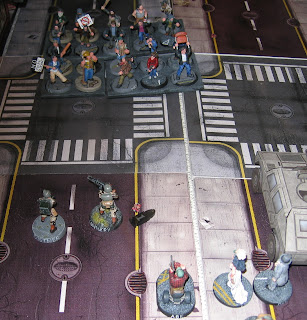 Lieutenant Costner and trooper Connery moved forward to find out what the newcomers wanted.  They were making a lot of noise and it was difficult to hear clearly, but it appeared that they wanted the military to hand over their weapons so the civilians could defend their own homes against zombies.  This wasn't going to happen!

In the side streets, there were stirrings and movements as the first few zombies started to appear.  The guardsmen and the mob were too intent on their confrontation to notice, though some of the survivors were becoming very uneasy.

Costner shouted to the crowd to disperse, but they kept on coming.  Both soldiers on the front line were hit by thrown rocks and bottles, though neither was seriously injured.  In desperation, Connery fired a warning shot over the heads of the rioters. 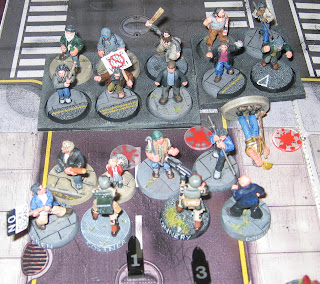 The mob immediately broke ranks and charged.  Lieutenant Costner squeezed off a single pistol shot as the thugs approached, but his bullet went wide (perhaps it was also intended as a warning).  Connery reacted by instinct, mowing down 3 of the protestors with his assault rifle.  Any hope of a peaceful settlement was now gone (to be fair, a REP 4 angry mob with 3 agitators was always likely to make a swift frontal attack, if I've understood the ATZ:Haven rules for mobs correctly)! 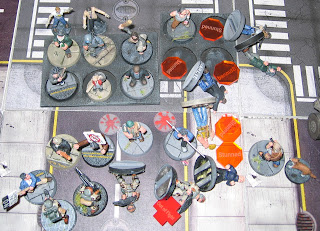 The fighting quickly became widespread, as Dalton and Eastwood rushed in to help their 2 colleagues.  Eastwood was swiftly knocked out by a lout who thrust a scaffolding pole into his face, but the other soldiers just about managed to hold the line.

From the side, John the photographer started taking pictures of the shambles.  His powerful camera flash temporarily blinded a number of rioters who were looking in his direction, thus preventing them from outflanking the soldiers.

At the same time, a pair of zombies clawed at the mob from behind, but without doing any damage.

Other than John, the survivors had kept their distance from the large melee in the middle of the road.  Darcy was caught by surprise by a lone zombie who came round the corner of the games store.  He wrestled with it for several turns before finally putting it down. 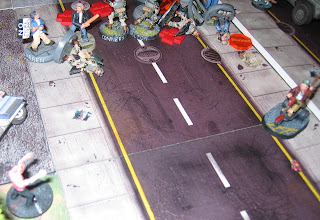 Abe had parked his mobility chair on the central reservation.  From there, he took potshots at the occasional zombie coming from the rear.  He even managed to hit one (a first for Abe!) but although it fell to the ground, the creature just stood back up again and continued its slow approach.

At this point, we drew the first random event of the game.  This indicated that the middle truck had suffered another puncture.  Maybe this was caused by a stray bullet, or perhaps it had been fitted with some sub-standard equipment at the depot by a dodgy quartermaster.  Whatever the cause, it now had 2 flats; this vehicle wasn't going anywhere for a while! 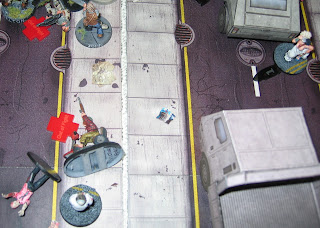 Lizzie had noticed 2 zombies finally make it into contact with Abe.  The old man seemed to be holding his own; he knocked down his first attacker.  However, Lizzie could see the second creature about to bite him.  She fired a single shot at it; her bullet narrowly missed the zombie but hit Abe instead.  Lizzie was horrified to see the pensioner fall from his scooter and slump to the ground.  Before she could do anything else, the 2 zombies ripped the man's belly open and started to devour him! 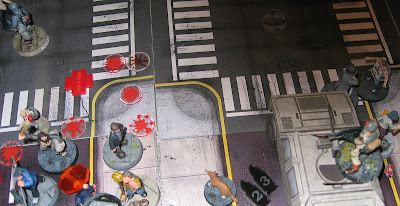 What of the 5th soldier, corporal Van Damme?  Rather than getting involved in the brawl, he had climbed into the GPV and unlocked the roof-mounted M240 MMG.  He now swung the weapon round and opened fire into the mob.  At this range it was almost impossible to miss the closely-packed civilians and many were slain. 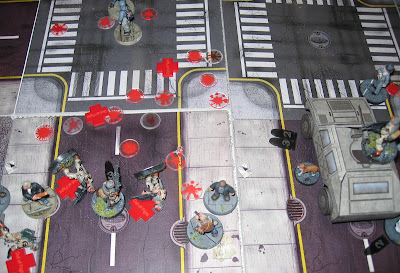 Within a short time, the crossroads was turned into a scene of carnage as Van Damme hosed the mob with machine gun fire.  Even as Lieutenant Costner and trooper Connery were knocked out of the fight, the few remaining rioters broke and fled.  The last pair stopped long enough to take the pistol, helmet and radio from the unconscious Lieutenant Costner before they also ran off.

More and more zombies were approaching in the middle distance, attracted by the commotion.  At this point, a flurry of random events occurred.  The players used the Distraction event to move Edna to safety, away from one such creature.  However, Thousands of Them didn't bode well at all!  Fortunately, a Pause for Reflection gave the remaining humans a little breathing space. 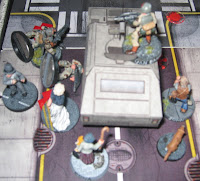 Dalton and John each grabbed the nearest unconscious soldier (Eastwood and Connery) and dragged them over to the GPV.  The party had just enough time to jam everyone into a very crowded vehicle and drive off before the zombie hordes caught up with them.

None of the characters were eligible for a REP increase after this game.  Although most of them had defeated an opponent, the party's victory conditions had not been met.  The mob wasn't dispersed peacefully, looters did manage to get hold of military equipment and 2 characters were lost (Abe was already dead and Lieutenant Costner was left for dead).  However, it was bonanza time for the zombies; the crossroads was littered with unconscious and dying rioters!