It's been a little while since I posted.  In part that is because I've been taking a break over the Christmas period (and it's amazing how much time is sucked up in entertaining the children, cooking, shopping and other such activities at this time of year).  Secondly, I've got a bit of a cold right now and am feeling quite tired and lethargic.  So today's post is going to be something very simple.

Back in July, I showed the world what was on my workbench at the time (here).  Since then, many items have been finished and stored, while many new models have been started.  Here's what it looks like now: 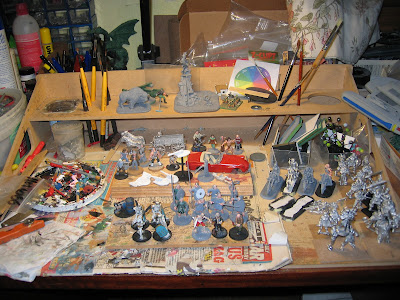 Hmm.  Some things are exactly the same, though I think I'll leave it up to you to work out what, if you care to.  I suppose we could think of this as a real-life "spot the difference" puzzle, but without any prizes!

So, what am I working on currently? 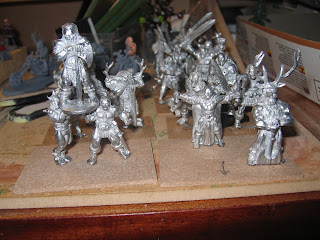 Black Tree Design are having a big sale at the moment, so just before Christmas I ordered a 28mm barbarian army deal and separate leader at 50% off.  Of course, the miniatures were promptly taken off me by my family, who wrapped and tagged them and handed them back on Christmas day.  Thanks, it's a horde of hairy, smelly, uncouth model warriors!  Just what I wanted :-) !

These figures will be made into a warband-heavy force for Hordes of the Things.  So far I've managed to base the hero general (front left), cleric (front right, still needing a sacrificial altar, rune stone or similar) and a number of warband elements (behind).  Yet to come are a couple of bases of shooters and possibly a horde or two of young hopefuls. Sadly I've run out of pre-cut 60mm x 30mm bases and will therefore have to order or make some more before I can proceed. 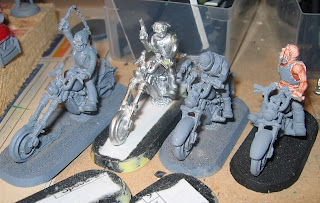 Few manufacturers make 28mm models of bikers actually on their motorcycles - but West Wind Productions do!  These models are a real b*gger to put together, so I've only managed to assemble 4 so far despite having the set (of 10) for some months now.  Still, I think they'll look good when they are finished. 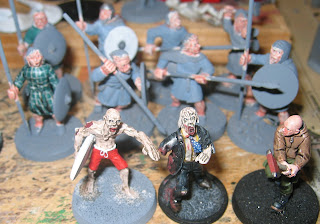 At the front are a couple of zombies and a survivor that are near completion.  The zed with the surfboard and the bald guy with the axe are from Hasslefree, while the zombie in the middle is another Blue Moon figure.

Behind them are 8 of the warriors from my Saga Scots warband.  I've mentioned before how hard I'm finding it to get these guys painted.  Well, I've finished the 8 hearthguard and so only have 16 warriors to go.  At least these lesser troops shouldn't be as ornate as the nobility; they ought to be quicker to finish! 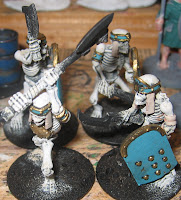 For Pulp games involving a bit of tomb raiding, what better adversaries could there be other than reanimated ancient warriors (especially if I throw in some Nazis as well)?  Here are 4 Egyptian warriors to back up the Mummy.  They are built from Games Workshop's Khemri skeletons, though I didn't like the oversized weapons in the GW kit.  Instead, I've replaced them with some oversized weapons from Crocodile Games "Warlords of Aegyptus" range.  At least they're not covered with skulls... 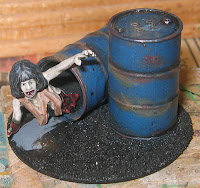 Here's something I'm making just because I had the parts; I'm not sure how I'd use it in a game.  The zombie crawler is coming out of the tipped barrel, which will also be releasing a stream of goo of some kind when the model is finished.


The Back of the Bench

Anything that ends up on the board at the back of my work area is only semi-active.  It could be moved from there, part complete, into storage (this has happened to a very large number of models of mine).  Or it might be brought forward and get further attention.  The decision usually occurs on the rare occasions that I tidy up.

Anyway, here you can see a variety of cowboys, spaceships, medieval townsfolk and zombies.  And Tarzan.  And the A-Team (or at least, 2 members of it). 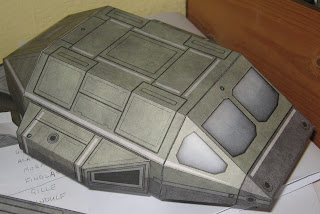 Last, but not least, is a part-built paper/card shuttle from Genet Models [ex-Ebbles Models].  The body is complete, but the undercarriage or landing skids are not attached.  Despite being described as 1:60 scale, this is a huge model in comparison with any ground vehicles in my collection.  Perhaps that's reasonable, but I'm debating whether to finish this one or to print another at a reduced size and build that instead.

So there we are - another collection of part-finished toys.  I really need to get some of these completed, if only to recover some table space (as if that's ever going to happen!).