Full Thrust: It's Life, But Not As We Know It!

2 off-world trade missions were visiting the rich, independent planet of Gomeisa Prime.  Both Federation and Ferengi negotiators were vying for favourable terms and exclusive contracts with the natives.
Although suspicious of each other, neither side was prepared to open hostilities.  Mainly this was because the Gomeisan Maharajah had made it clear that his people wouldn't trade with anyone who started a war in their system.
All this became moot when a large, spacefaring creature was detected approaching the planet.  The monster, tentatively identified as the "Kraken", would surely wreak havok on the planet and its inhabitants.  At least, that's what the Gomeisans claimed when they pointed out that no treaties could be signed until the intruder was driven off.
The ships of both trade missions together would probably have the combined firepower to defeat the Kraken.  However, each knew that the fleet which took less damage would be in a better negotiating position thereafter.  Could they work with each other to save the planet?  Read on...

This game would act as a further test of my Full Thrust event cards, as mentioned before here and here.  Each side would be dealt 3 cards at random; these could be held and played as desired (though any one side could not play more than 1 event in a single turn). 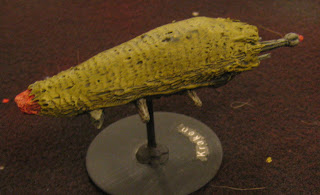 The Kraken is a large, space-faring life form.  It does indeed intend to eat the planet, or at least to suck off some of the atmosphere or something like that.  Or perhaps to lay eggs - who knows?
Whatever it did would cause harm to millions of the local inhabitants, though the Kraken either doesn't know or doesn't care.  It's not inherently aggressive, though; it will ignore spaceships unless they attack it (though the Ferengi and Federation commanders don't know this). 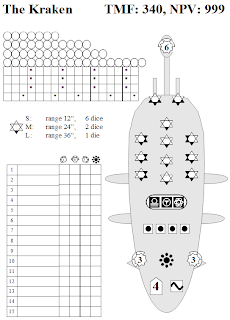 In Full Thrust terms the Kraken has been designed as a Phalon battleship, albeit a very large one.  Since my playing group doesn't normally play with 'xeno' technology, this should give them a bit of a surprise!
Its most notable features are the huge, level-6 plasma bolt launcher at the front and the very thick, 4-row shell armour.  For such a large 'ship', it's surprisingly nimble with a thrust rating of 4.  Oh, it also has a couple of smaller plasma bolt launchers facing side and rear.  Yes, this creature really can shoot flames out of its arse!
I'll be in command of the Kraken myself, as well as acting as gamesmaster. 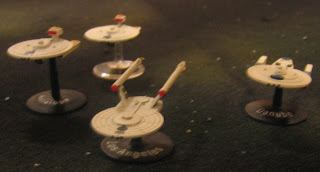 The Federation fleet consists of the following: 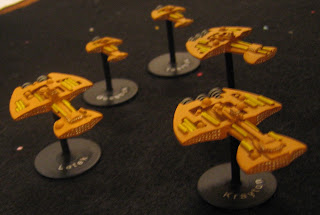 The Ferengi trade delegation has: 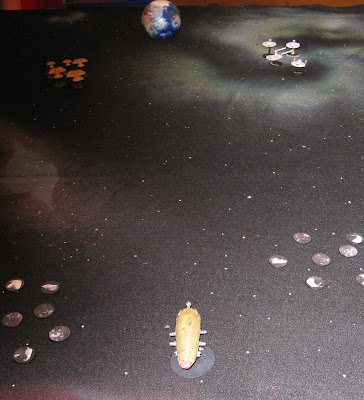 The Kraken approached the planet at a leisurely speed of 8, passing between a couple of small patches of asteroids.  Initially, both the Ferengi and Federation fleets barely moved; it looked as each was waiting for some sign of commitment from the other. 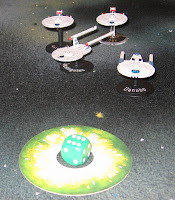 After a couple of turns, the captain of the Danube tried a long range shot at the monster despite the explicit orders of the Federation admiral to hold his fire.  This immediately brought about some retaliation from the Kraken: it launched a large plasma bolt ahead of the Danube.  Both the Danube and the Los Angeles took significant damage from the blast, but due to the extremely low speed of the Federation ships the bolt missed the destroyers completely.

The Ferengi fleet had approached a bit faster, though without shooting.  They now opened fire half-heartedly and even managed to scratch the Kraken's shell.  At the same time, their admiral took the opportunity to play a Plasma Fire event on the creature.  This could have done some damage, had it burnt out of control.  However, the Kraken's equivalent of damage control parties (antibodies? white blood cells?!) put the fire out immediately.  All it felt was a little indigestion. 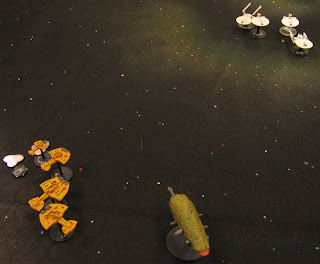 The enraged Kraken turned on the Ferengi just as they attempted to veer off.  First, it launched a lesser plasma bolt right into the middle of the cluster of yellow ships.  This was reduced from strength-3 to strength-1 by defensive fire, though both corvettes were badly damaged by even the small shockwave.  Pulsar fire from the Kraken wasn't particularly effective, so it was just as well for the creature that most of the Ferengi ships couldn't retaliate: their largest batteries were of forward facing weapons.

To add insult to injury, the Ferengi then played another event card.  This time it was Tribbles, thus infecting the Kraken with a particularly obnoxious space parasite.  Again, the creature's internal damage control systems took care of this menace before anything bad happened to it.

Before the Kraken could take any other action, the Federation player announced a further event card.  This was getting annoying!  How come the opposition had all the cool cards, when all I had was a useless Atmospheric ionisation?!  The Federation's Static Warp Bubble event froze the Kraken in a separate plane of reality for a turn (though on re-reading the card now, I realise we played it incorrectly.  It should have affected a random ship on any side, not just the enemy of the card's owner.  Oh, well). 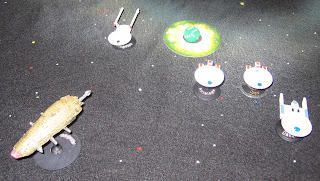 When it returned to reality, the Kraken found that the Ferengi ships had all moved away.  On the other hand, the Federation fleet was now much closer and the monster had reloaded its prow launcher.  It fired a huge plasma bolt at the annoying white ships... 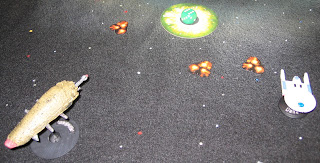 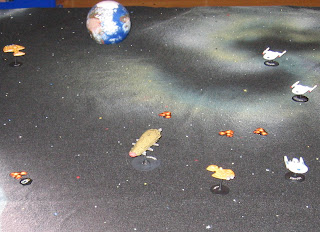 Many players had lost their ships by now, either destroyed outright or crippled and out of the fight.  Consequently, as gamesmaster, I allowed some reinforcements to enter play.  For the Federation, the light cruisers USS Phoebe and USS Callisto came streaking in from the right.  On the left, the Ferengi battleship Hoex approached more sedately.

Just as the Kraken was about to turn back towards the planet to do whatever it needed to do, the Ferengi played their last event card.  Romulan Ale is intoxicating enough to affect even the largest life form, though how the Ferengi managed to make the monster partake is unknown to me!  Perhaps they beamed a fine mist of the drink into the path of the creature?  Anyway, the result was to force the woozy Kraken to repeat its previous movement orders - a hard turn to the right! 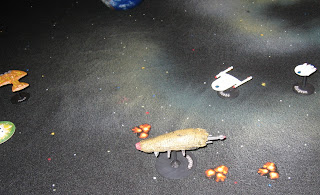 The drunken turn took the Kraken in exactly the wrong direction and left it face-to-face with the Phoebe.  Despite being severely outclassed, the brave Federation light cruiser landed a punishing volley of phaser fire on the monster, breaking through its shell and causing enough internal damage for a threshold check.
At this point, the befuddled Kraken destroyed a couple of the smaller Ferengi ships that were tailing it (the light cruiser Letek was completely atomised by a massive overkill), but its smaller plasma bolts failed to inflict serious damage on the heavily-shielded Federation cruisers.
Finally, the newly-arrived Ferengi battleship Hoex fired.  Its opening shots also delivered an improbably large amount of damage, but more importantly it stunned the Kraken for 5 turns (In Full Thrust terms, another threshold check yielded a command bridge critical hit).  Since the beast was now out of action and also because we'd run out of time, I declared the game over!

With the Kraken drifting away from the planet, stunned and helpless, the inhabitants of Gomeisa Prime were clearly saved, though at a terrible cost.  Both trade missions had lost a number of ships: the final count was as follows:

At the time of the game, I felt that the Ferengi had come out better.  However, looking at these results I'd say it was pretty even after all.

Many event cards were played in this game.  The Ferengi admiral was particularly lucky to have a full hand of useful events, though the Federation didn't do badly either.  As it turned out, quite a few of these cards didn't have much effect on the game, other than to unsettle the Kraken, that is!  However, one or two had much more significent consequences and these certainly added to the narrative.
On the other hand, the Kraken (i.e. me) didn't have any cards that were useful during this game.  Humph!