The Fall of the House of Ug

At the Helensburgh club this week, we played a game of Adventures in the Lost Lands.  I've not got time for a long description because we're having a new carpet fitted at short notice (all hands to moving books, toys and furniture!), but here's an overview. 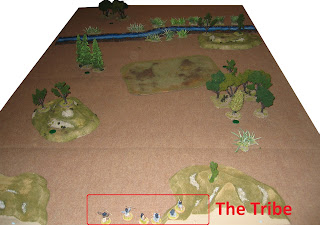 We were playing the Gather scenario from the Lost Lands rulebook.  A small group of Neanderthals would make their way across the board, looking for food.  The women would harvest nuts, fruits, roots and berries, while the men would protect them from danger and hunt for meat.  At least, that was the general idea...

The Neanderthals would be "victorious" if they all survived (very important) and if they managed to collect at least 3 food units per member of the group.  We managed to get through 4 quick games, at least in part because some came to a very abrupt end!

The tribe split into 2; each group headed for a separate stand of trees to look for fruit.  An aggressive PEF (possible enemy force) moved up to the other side of the hill from Broud and the 2 women who were with him.  He didn't see the PEF, but one member of group 2 spotted it from the other side of the table. 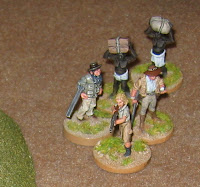 The PEF was resolved as a band of hardy explorers. 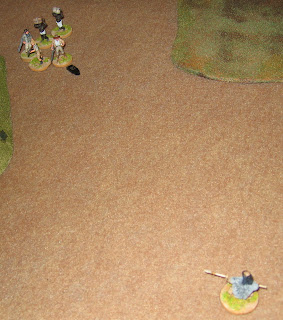 Crug left the safety of the right-hand stand of trees and tried to run across to Broud's group to warn them about the strangers.  It seems that the white people were lost, nervous and dispirited; their leader took Crug's approach as a hostile act and opened fire on the unsuspecting Neanderthal.  Crug wasn't hit, but reacted by just standing still in astonishment. 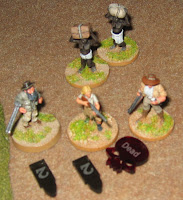 Broud heard the shouts and the strange noises, so he ran over the hill and charged straight towards the intruders.  Their leader reacted swiftly and shot him dead.  Following that, the other man and the woman fired upon Crug, hitting and badly wounding him.  The other Neanderthals were all in woods or behind hills and would have been able to escape without coming in sights of the strangers.

This time, the tribe split into 3 groups.  Broud and Uka worked up the left side of the board, while Crug and 2 more women harvested the right side.  The headstrong youngster Goov ran up the middle, looking for trouble (i.e. chasing every PEF that appeared!).
Both groups of harvesters found large amounts of food, though Uka really excelled; she probably collected more on her own than Ebra and Iza did together!
All PEFs were resolved as "no encounter", much to Goov's disgust!

GAME END: Lots of food, no injuries: massive win for the tribe!

Again, the tribe scattered and began working their way up the board, harvesting food as they went.  This time there wasn't as much to collect, though.  Additionally, the number of PEFs grew rapidly; the game's Encounter Level ("danger" level) rose from 2 to 4 quite quickly.

The leader, Brun, was becoming quite apprehensive.  He wasn't able to prevent one of the other hunters from entering a thicket beside the river after noises were heard from within (i.e. another PEF). 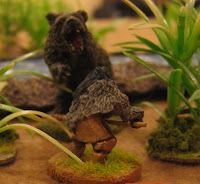 This time it was Durc who was reckless.  He came face-to-face with an angry cave bear, which promptly knocked the man down and injured him! 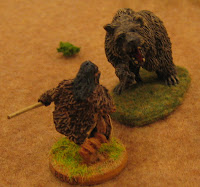 Brun ran as fast as he could to try to help his fellow, but long before he could reach the river the bear killed Durc.  It then looked around, saw Brun in the open and decided to attack him.  Definitely this was a bad-tempered bear!

Brun wrestled with the creature for a while, whilst the rest of the tribe fled in panic.  He even managed to beat it in one round after becoming enraged - but he failed to wound the animal and in the long run there could only be one winner.  Bear 2, Tribe 0.

Once again, the tribe split into smaller groups.  The women all headed to the left to look for salad stuff, while 2 of the men headed right to chase PEFs.  Durc was left alone in the middle, unsure what to do. 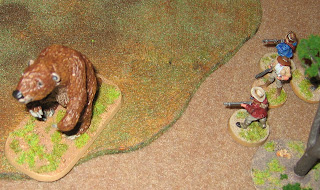 While he dithered, the other 2 men headed for the right-hand forest.  As they approached, 2 PEFs were resolved at once.  The closer one turned out to be a gigantic Megatherium; the other was a party of Great White Hunters who were obviously stalking the beast. 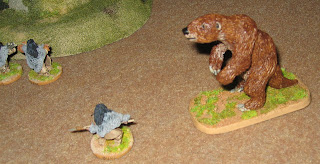 The huge animal, unsettled by the presence of so many people, lumbered forwards.  The first thing it saw in front of it was poor Durc, so it ground him into a paste. 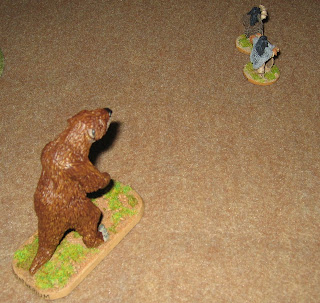 The white men then shot at the megatherium, but either missed or failed to inflict any injury.  Startled, it looked round - the closest people it saw were a couple of the neanderthal women.  The megatherium charged clumsily towards them; Ebra fled as it approached, but Oga hesitated and was batted aside by one of its giant paws.
Fortunately for those readers who abhor violence, we ran out of time at this point.  Still, the result was quite clear and had we continued it wouldn't have helped the remaining people very much.

Some of the younger members of my gaming group just couldn't seem to grasp the idea of a game where they could win by not killing things (especially if it meant that you weren't killed in return!).  The results for the 4 games clearly show that there was a lack of agreed strategy between players over things like group cohesion and whether to chase the PEFs, ignore them or stalk them.
If any real-world tribe of hunter-gatherers behaved like this then they would become extinct quite quickly.  Like Neanderthals, I suppose...