TRWNN: The Clantons and the Eastwoods 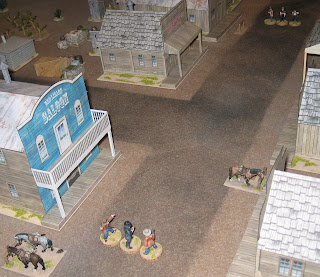 This week at the Helensburgh Games Club, I thought I'd put on a game of The Rules with No Name.  The scenario was very simple.  Emmett Clanton and his brothers Jebediah and "Black" Bart (a nasty bunch, if ever there was one!) have just ridden into town and tied up their horses.  Note that Black Bart is so-called because of his behaviour, not because of his clothes.  Emmett is the dandy in the black suit!

The Clantons are feuding with another local family, the Eastwoods.  Of course, some of the latter are also in town.  I guess the sheriff is either away at the moment or he just doesn't want to get involved today... 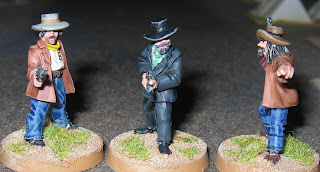 Jebediah pointed to the 3 figures who were watching the Clantons from the other end of Main Street.  "Say, ain't that Eastwood and his cousin?  You remember, the ones who ran me out of town last week?  I don't know the other fella, though."
Emmett gave a grim smile.  "No-one does that to my kin!  I reckon we'd better go and ask them for an apology."  He loosened his coat and started to walk slowly down the street. 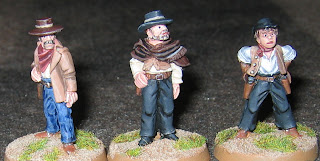 At the other end of the road stood "Blondie" Eastwood, his cousin "Kid" Shelleen and their new ranch foreman, Jesse.
"Dang, if it isn't them Clanton brothers" exclaimed Blondie.  "I told Jeb Clanton to stay out of town.  He must be as stupid as he is ugly to come back so soon.  We'd better teach them a lesson, boys."

To recreate that "High Noon" feeling, the players would initially be very restricted in what actions they could take.  When their character card came up from the action deck, they could either:
Once the first shot(s) were fired then these restrictions would be removed and gameplay would proceed as normal.  There would be no further need for challenges and backshooting would be acceptable! 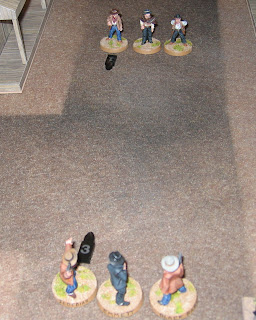 Both sides advanced purposefully towards each other down the hot, dusty street until they were in medium range for a pistol.  It was Jesse who cracked first and went for his gun.  Even though he beat Jebediah for speed, his shot went wide.  Jebediah blazed away in return, but missed completely (being a Citizen, he was forced to blaze and it wasn't surprising that he missed!) 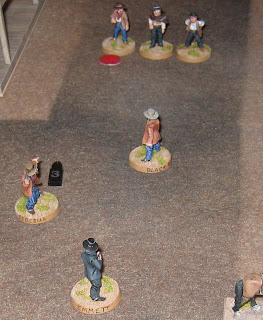 Black Bart reacted by running forwards and pumping lead into Jesse, causing a minor injury.  Emmett also fired and Jebediah followed suit, though without effect.  The Clantons were all determined to kill this big stranger. 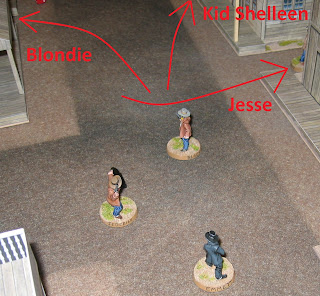 Faced with this reckless advance, the Eastwood gang scattered.  The all ran in different directions, intending to take cover behind nearby buildings.

Kid Shelleen ran a bit further than he had intended.  Being a Citizen, he made a disastrous roll when trying to return through a patch of scrub and fell flat on his face! 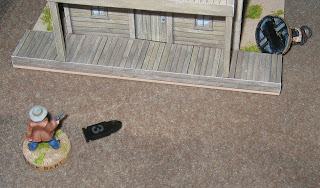 Black Bart went after Blondie.  Despite the latter being partially under cover around the edge of the Trading Company's store, Bart's fusillade still hit and wounded him. 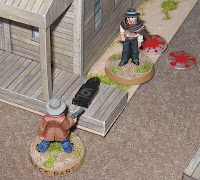 Bart then proceeded up to point blank range and shot Blondie some more.  The Eastwood boy was Hard as Nails, though and although the bullets hurt, they didn't stop him. 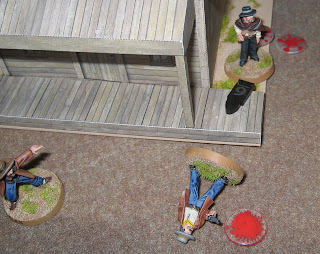 Indeed, Blondie even recovered enough to fire back at Black Bart.  Sadly for Blondie, Bart was Tough and was not seriously inconvenienced by the bullets. 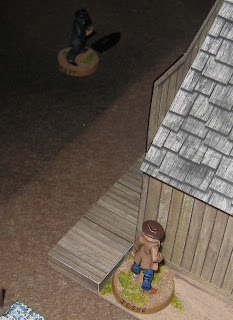 Elsewhere, Kid Shelleen was hiding behind a water trough further up the street.  He fired occasionally at Bart, but this was ineffective.  Emmett stood in the middle of the highway, firing at Kid Shelleen whenever he could see him.  Jebediah wasn't doing much, having been taken somewhat by surprise by the speed of events.  And finally, Jesse circled the Sheriff's office and prepared to shoot Emmett in the back. 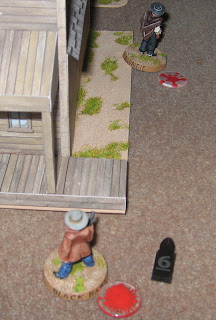 Realising that he was getting the worst of it, Blondie tried to limp away and find cover.  However, he didn't get far before Black Bart shot him yet again! 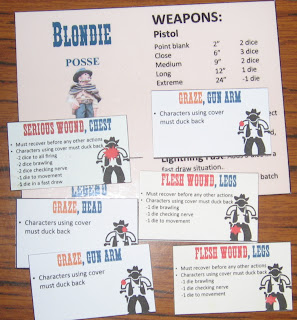 With significant wounds to both of his legs and to his chest, Blondie could no longer walk.  Crawling wouldn't get him very far, so he gritted his teeth and prepared to face his enemy! 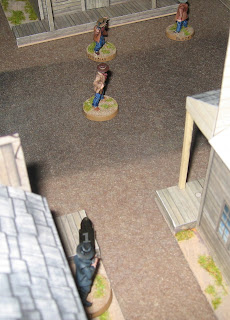 When Jesse fired at him (and missed), Emmett immediately took cover in a nearby alley.  You don't get to become a Legend by hanging about in the open when being shot at from behind!
Jesse then left the corner of the building where he was hiding and advanced up behind Jebediah and Black Bart. 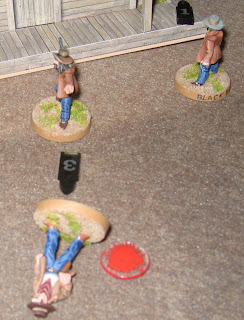 Despite Emmett being perfectly placed for a careful, aimed shot (12 dice rolled, but he missed!), it was the startled Jebediah who spun round, blazed away with his pistol and hit poor Jesse so as to render him unconscious and bleeding bad. 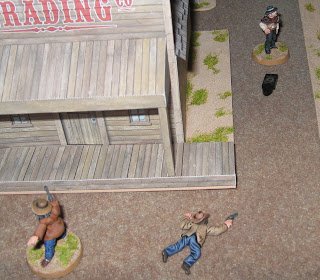 Blondie was barely able to stand, but a fantastically lucky shot from him hit Black Bart in the head, killing him instantly. 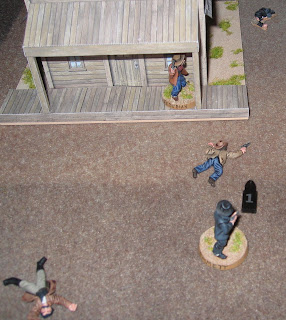 It wasn't enough, though.  Sadly for the remaining Eastwoods, Emmett was on the rampage.  He moved out from his alley, took careful aim and shot Blondie dead. 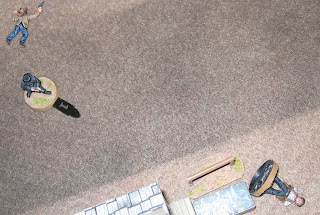 Emmett then turned round to face Kid Shelleen.  Despite being under cover, Emmett's shot hit the young man and injured him badly.  The inexperienced Kid immediately threw his gun away and called out "Don't shoot!  I'm unarmed!" (lost his nerve test).

Well, the Clantons won that, I think!  Still, they didn't come through unscathed and will no doubt be grieving for Black Bart.  I wonder if Blondie has any younger brothers to continue the feud and try to take revenge?

In general, I'm very pleased with The Rules with No Name.  There's just one area which doesn't quite work for me and that's the way wounds are allocated.  There are only 5 chances out of 36 of a Dead result on the injury table (2 out of 36 if the target is Tough) and having a better chance of hitting doesn't improve this.

I've got a house rule in mind that I may implement the next time I play TRWNN to make hits a bit more serious.  It's this: for a deliberate or aimed shot, any '6's rolled beyond the first (i.e. the one needed to get a hit at all) may be used to modify either the wound location or severity by 1 each.

So if I take a really good, aimed shot and manage to roll 3 '6's then the first one causes a hit on the target (as per normal).  The 2nd and 3rd '6's could each be used to modify the hit location or wound severity dice by +1 or -1.  Of course, if I blaze away then each '6' is a separate hit and I'll just need to take my chances as to where the hit occurs and how bad it is.  Does this sound like a workable system?