In zombie apocalypse games such as ATZ, we typically need 3 levels of civilian.  Firstly, those who are unarmed; they may or may not be aware of the impending doom.  Secondly, the citizens who have acquired purpose-built weapons (typically, but not always, guns).  Lastly, there is an in-between category: the men and women who have used whatever was to hand to improvise as a weapon.  To me, this is a very important group who would be numerous in societies without easy access to firearms.  At least, they'd be numerous to start with.

Here are some of the plucky, inventive citizens from my collection who have managed to acquire at least a basic, improvised melee weapon.  I've given each of them a "survival" rating, based both on the choice of weapon and the attitude of the wielder.

A club or bat has several advantages.  Firstly, it's designed to be held so as to impart a considerable force to a small ball.  Secondly, many people are familiar with such items and already know how to wield them.  So, they'll do fairly well when defending against zombies.  From left to right:

Not really that good, as most of these items aren't designed to be swung.  Still, here goes:

Sometimes you've just got to grab for the nearest item and hope that it'll work for killing zombies: 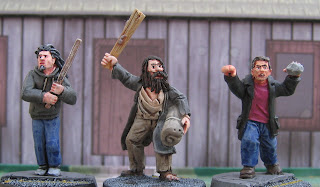 Maybe there's nothing to hand other than junk.  I suppose it's better than nothing:

Some improvised weapons are just not going to protect you in the event of an apocalypse.

I'm always on the lookout for more survivors.  There are so many gun-armed models on the market, but in many ways I prefer the ones above.  There's something about the desperate, make-do, ordinary civilian that just appeals to me!