This week, I feel that I've finally got some of my painting and model-making mojo back, after a long winter when I didn't make any real progress.  Several projects have advanced usefully, though not by enough to counteract some new purchases :-( .

Like many people who game in 28mm, I ordered a box of Wargames Factory's Apocalypse Survivors as soon as they became available.  I don't need the figures as I already have many models painted up (and quite a few unpainted), but this promised to be more interesting miniatures as well as a rich source of spare parts.

There's already a very good review of this set on The Colour Blind Painter's blog here: http://thecolorblindmodelpainter.blogspot.co.uk/2013/05/review-of-wargames-factory-apocalyptic.html , so I'm not planning to write such an article.  Rather, these are a few of my early experiences. 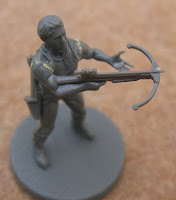 The parts on this kit are all labelled, so that arms C1, C2 &c fit onto body C (for example).  That's fine, though it does suggest that there is a limited set of ways in which the miniatures can be built up.  More on this later.  Anyhow, I particularly wanted a crossbow-armed survivor, so the first thing I did was to identify the parts for the bow (they're really small and fiddly).  I then cut out the corresponding body.  At least, I think it was the corresponding body; I checked several times over.  However, as can be seen from the picture above, it just wasn't possible to fit the parts so that the left hand supported the crossbow!  I must have chosen the wrong body, though I cannot see how.

The next models were made with more care.  Generally speaking, these went together without any fitting issues.  Have I mentioned before how much I dislike gluing both arms for a 2-handed weapon at the same time?  I've only got a limited number of hands myself, so any pose that requires 3 items (body, left arm, right arm) to be glued at the same time is tricky.  I don't enjoy it much. 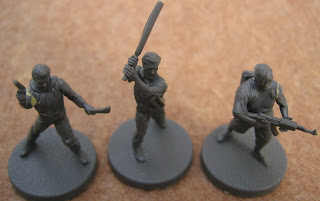 More figures, of whom the majority have 2-handed weapons.  This is getting a bit frustrating!  At least the glued models look well animated and the parts do fit well (when tested first to make sure they're correct). 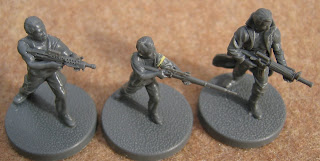 Oh, look - more 2-handed poses.  I was caught out a bit with the boy (body C), as there are 2 weapon options (C1 and C4).  There are also 2 left arms (C2 and C3).  I thought that these would be interchangeable - that I could use either left arm with either right arm.  That's almost, but not quite, correct.  I think that I used the "wrong" left arm for the rifle; I had to use filler to cover the slightly odd fit.  Hmm.

Finally, I thought that I'd try another crossbowman.  This time I ignored the tags on the parts and chose the body I thought most likely to fit the selected arms.  Now that's much better; the pieces go on with barely a gap and the pose looks a lot more natural!

This is an excellent kit and cheap enough for some mistakes to be made.  I'm a bit concerned about variety, though.  If/when I make up the boy from the 3rd sprue then I think he'll have to look pretty much like either the first or the second version as the weapons options in the kit are not as easily interchangeable between different bodies as I'd like.  Still, that's the price one pays for having animated poses.  It would always be possible to do some conversion work to make subsequent models more distinct - but probably I'll not do that yet.