A Chain of Consequences

Exactly one week ago, I ordered a copy of "Songs of Blades and Heroes" from Ganesha Games.  These are a very popular set of wargame rules for  fantasy skirmishes and I had been vaguely thinking about buying them for some time.  However, it was this post on Brummie's Wargaming Blog which finally pushed me over the edge.  After all, it was only $8 (US) to download the PDF and I already have the means to print out such documents.

For the first day or so after this I flipped through the rules, becoming more and more interested as I did so.  I began to wonder which models from my collection might be suitable for a test game, when my eye came to rest on the description of the Lethal attribute.  The very first example given was for a Witch Hunter, who might know exactly how to be lethal to harmless-but-unpleasant old women (my words, not verbatim from the rules!). 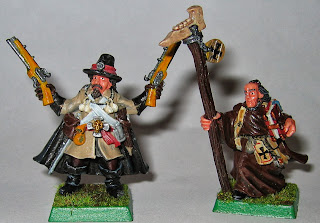 Aha, I thought: I've got an old witch hunter figure!  He was part of the "Dogs of War" army from Games Workshop and came with a mad monk as a faithful sidekick.  Mind you, I think that "mad" is probably a necessary qualification for all witch hunters, isn't it?  Hmm, these are models I painted a long time ago - they're slightly too glossy and are on square bases (I prefer circular for skirmish games).  Still, it's a start. 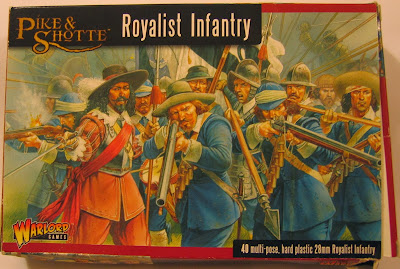 OK, but these two aren't much of a warband on their own, are they?  Let's see - I've got a box of plastic Royalist infantry (English Civil War) lying about somewhere.  These were a freebie I got with a subscription renewal a few years ago (probably Wargames Illustrated, but I cannot remember for certain).  I'd always been planning to sell them since I don't collect ECW models, but now I'm glad I never got round to it.  I should easily be able to make a dozen soldiers with a mixture of muskets and swords or pikes.  Indeed, the command sprue might provide some better-dressed figures - perhaps the local magistrate has been roped in to the witch hunt as well! 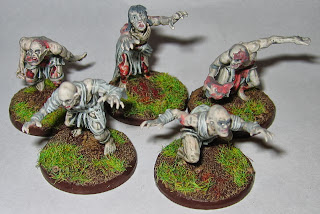 Now for the opposition.  Firstly, I've got a few Mantic ghouls and zombies already painted up; all I had to do for these was to separate them from my more usual, modern zombies.  These came with some kind of sampler pack that Mantic sold just before Christmas a few years ago.  They'll do for shock troops.

What about the witches?!  OK, let's see: a while ago I bought a pack of West Wind Production's "GW0007: Storybook witches".  There were 4 hags in this pack, plus a cauldron containing an unfortunate child victim.  I only really wanted the one hag at the time, as the leader for my intended "Wicked Witch of the West" Hordes-of-the-Things army.  That leaves 3 classic witches that I can paint and base.  Excellent!

Hmm, the evil side still seems a bit lightweight.  Somewhere I've got a couple of Games Workshop banshees already painted, I think.  I can use one or both as ghosts or evil spirits of some kind.  Also, while rooting through my box of bases I found an old packet of plastic giant rats, again from Games Workshop.  They're not the greatest of sculpts, but I can paint these up to add some expendables to the witches' force.

So, I'm now 7 days into this new venture.  I have to locate some of my models that are in medium-deep storage and, more importantly, I have 13 humans, 3 witches and a large number of rats to paint up.  Also I'll need to print out quick reference sheets and character cards and design a scenario, preferably all before Halloween.  I really didn't need any more projects right now.  WHAT HAVE I DONE?!