Well, this is now week 3 of Zomtober.  I'll confess that it nearly caught me out, since I've been concentrating on painting witch hunters for the last week.  Still, I had some appropriate models on my workbench that were largely completed, so I've finished them off quickly. 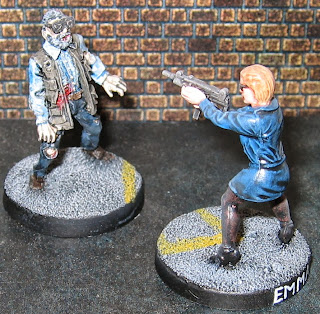 Today's duel is between "Emma" (codename "M") and "Romero zombie".  Emma is a rookie member of the secretive "Men in Blue" organisation, though obviously women are also recruited. 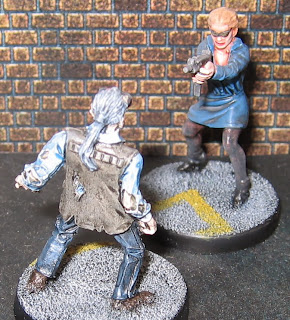 How do I know that Emma is a rookie?  Well, for starters, she's turned up for the apocalypse in totally unsuitable shoes.  High heels like this are really not very practical for fighting or running ("shoes to die for"?).
Secondly, she seems to have fired low: the zombie has wounds only in the belly and these will not incapacitate it. 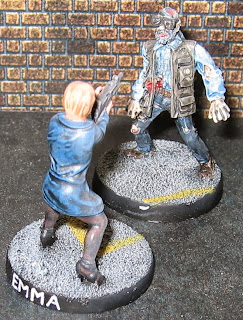 The question is this: will Emma retain her composure enough to aim for the head (and will she be steady enough to achieve this)?  If so then her machine pistol will easily have enough fire-power to dispatch the zombie.  However, if she continues to try for the easier body shot then the zombie will only be knocked back and inconvenienced until her ammunition is exhausted!

Emma is from Wargames Factory's "The Women" survivors.  "Romero zombie" is a special edition figure from Studio Miniatures (and could in one sense be described as "patient zero"; the person who started the entire zombie plague).