SoBH: Night of the Witches!

A little while ago, I wrote that I had started on a new gaming project: to paint 2 suitable warbands for a Halloween game of Song of Blades and Heroes (here).  Well, last night I took the results of this obsession along to the Helensburgh Games Club and set it in front of 5 of the members.Here's how it went (and yes, I know that it wasn't actually played on Halloween, but Tuesday was the closest club night to the 31st and therefore it had to be played then)...

Normally, I would have created some interesting story and goals for a game.  However, since this was to be the first time I'd ever played SoBH, I thought that I'd better keep it simple.  We ended up with a straightforward pitched battle, with each warband entering the table from opposite edges and the winner being determined solely by who could drive off their enemies. 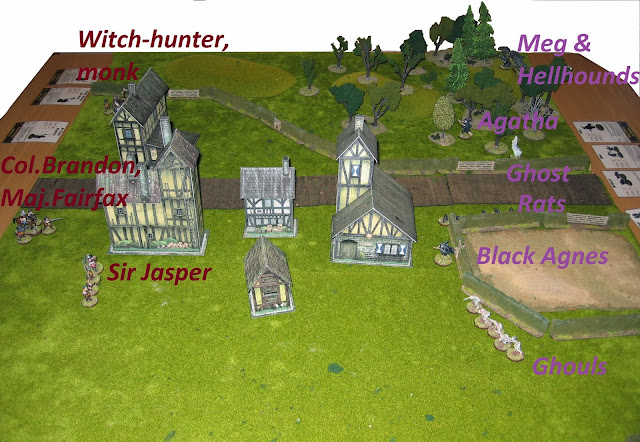 The 3 Witches had the following figures:
As can be seen, I really went to town on the attributes for this force!  Perhaps a bit more than necessary, in hindsight?

The Witch Hunters force was composed of:
I've not included a points value for either force.  Partly this is because I realise that I calculated some of them incorrectly, which is embarrassing.  It also reflects the fact that neither warband is technically legal: both have greatly more points in Personalities than the 1/3 permitted by the rules.  However, a rough figure would be about 600 points (to the nearest 100) for either side - that's about double the amount for a "normal" game.  I was aiming for a large, multi-player event, though...

Initially, the southernmost soldiers and the ghouls advanced towards each other.  A perennial issue for the troopers was that while the squaddies themselves would move forward on command, the players didn't advance the officers at the same time.  This left them without leadership for some critical moments. 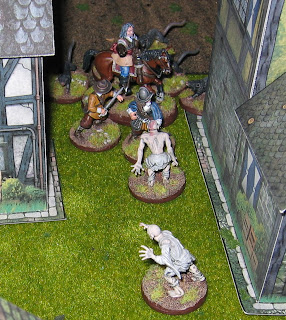 Colonel Brandon and his bodyguard moved up to join the sergeant in the alley.  Seeing this, the evil players immediately surrounded them with giant rats.  The ghouls moved up to the other end to block off any escape route. 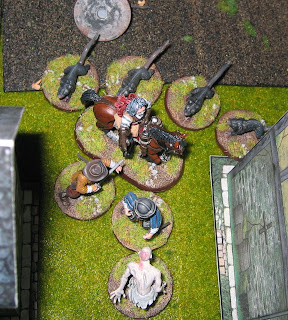 Only 1 rat had enough activations to make an attack.  Even though the Colonel was at a disadvantage, his horse managed to kick the rodent away.  It was immediately replaced by another animal, though. 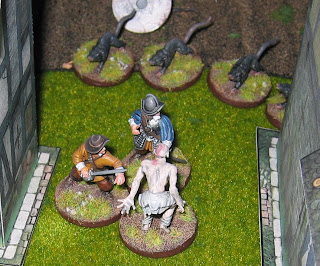 In his next turn, Colonel Brandon rolled 3 dice for activation (in SoBH, a figure can choose to roll 1, 2 or 3 dice against their Quality and receive an action for each success.  However, if 2 failures are rolled then your side's turn is over).  He made all 3 and used his Free Disengage (because he was mounted against non-mounted opponents) to flee through a narrow gap by the wall of the house.  With 3 actions and the Long Move attribute, he went right out of the village and half way across the fields...

Meanwhile, Sergeant Stone and the soldier double-teamed the nearest ghoul and slew it. 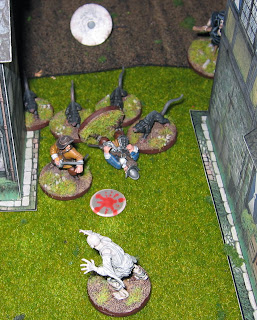 Their triumph was short-lived, though.  Surrounded by rats and a ghoul, the troopers had little chance of escaping.  First, Sergeant Stone was knocked to the ground.  Although he managed to pick himself up again, a fierce attack from the rats achieved a gruesome kill against him, despite his armour (it's probably best not to think about how this might have happened).  Once on his own, the other soldier didn't survive for long. 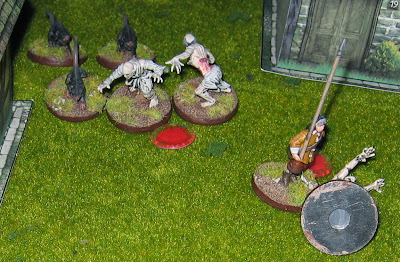 Seeing 2 more soldiers out in the open, the rat/ghoul pack moved on.  They achieved another gruesome kill against the first human, but the second lad was plucky (or desperate!) and fought back valiantly.  He killed 1 ghoul and floored another... 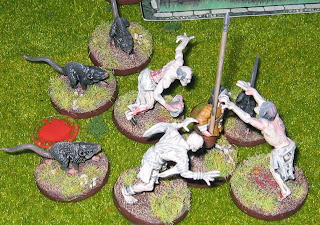 ...before the horde closed in and tore him apart (another gruesome kill)!  The only other person nearby was a solitary musketeer who hadn't managed to hit anything all game.  He took one look at the grisly sight and fled in horror!

To the north of the village, John Sterne, Brother Matthew and a very nervous trooper were advancing slowly through the woods.  "There are witches abroad tonight" proclaimed the experienced hunter.  "I can smell their fear!"
He was correct, but Meg and Agatha were hanging back a bit.  Instead, their pack of enormous hell-hounds were in the vanguard. 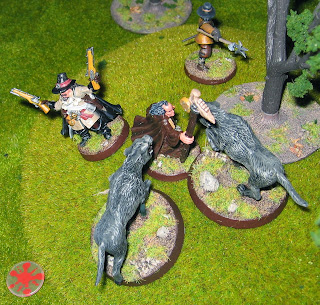 The 3 beasts made a co-ordinated charge through the trees, with 2 of them concentrating on Brother Matthew and the 3rd facing the witch hunter himself.  John Sterne killed his adversary with contemptuous ease, but the cleric was hard pressed.  Before either of his comrades could aid him, the monk was torn apart (yep, another gruesome kill).  This caused the soldier to run a short way off, but when he realised that he was then alone in the forest at night, he retraced his steps very quickly and stood behind the witch hunter's imposing bulk! 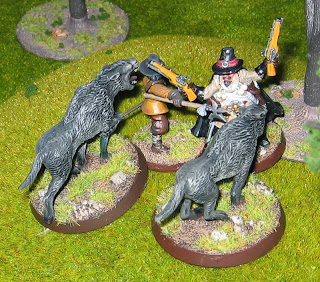 The 2 remaining hell-hounds renewed their assault.  This time the witch hunter tied with one beast; both opponents wary of the other's power.  However, the soldier was immensely lucky and managed to swing his halberd at just the right moment to kill the animal that was attacking him! 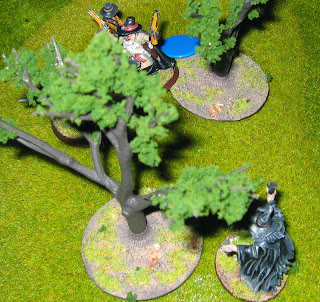 From behind a nearby tree, Meg now decided to get involved.  She managed to transfix John Sterne and freeze him in place.  This would have made him very vulnerable indeed, but with a great effort of will, he drew in a breath and shook off the curse before the hell-hound could take advantage of his weakened state.

What of the Colonel? 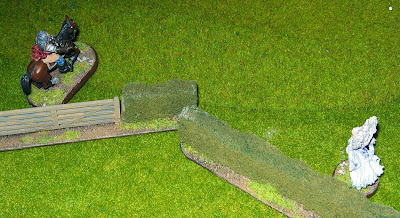 Colonel Brandon was very experienced in battles, skirmishes and sieges against human foes, but he wasn't used to fighting supernatural terrors.  After galloping out of the village, he started to work his way to the north, trying to join up with John Sterne and seek advice from the witch hunter.  However, in his path there was a ghost! 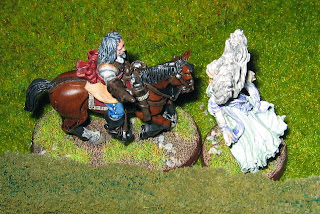 He tried to calm himself down by thinking of how he'd survived all his fights so far, spurred his horse on and charged straight at the apparition.  When the Colonel opened his eyes again, he was alone; the spectre had dissipated and vanished.  "Huh, that wasn't so bad" he thought to himself as he pressed on. 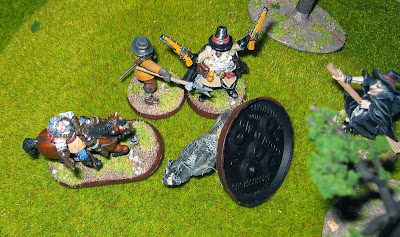 Hearing the noise of a scuffle ahead of him, the Colonel galloped his horse up the hill, just in time to bowl over the last hell-hound.  Agatha, the 3rd crone, tried to hex the witch hunter, but he saw her preparations in plenty of time and managed to dodge the spell. 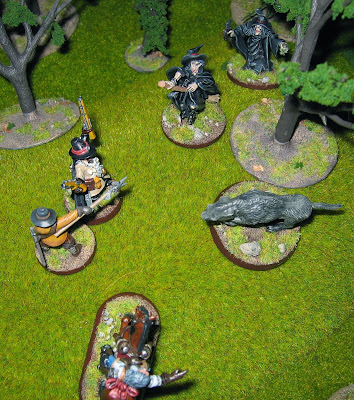 The hell hound picked itself up and backed away, just as Meg approached to support her sister.  The 2 sides eyed each other without attempting to disguise their hatred, but no-one was prepared to make the first move. 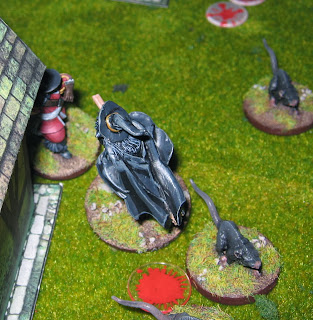 Back on the southern outskirts of the village, Sir Jasper came huffing and puffing up to see how his troopers were doing.  The scene was grisly, with rats and ghouls gnawing on the carcases of the fallen soldiers while Black Agnes watched on.  Sir Jasper wasn't having any of that!  The stout fellow summoned up all his younger memories of fencing and lunged at the foul, black-clad hag. 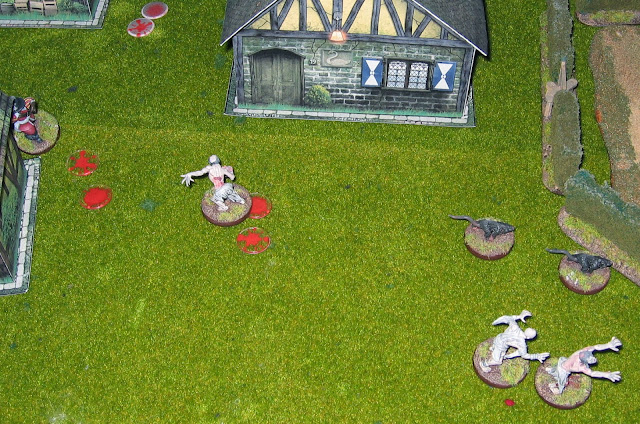 With an eerie screech, the witch fell down, dead!  At the sound, the minions of darkness looked up and saw the magistrate standing over the body of their leader.  Almost all of them turned and fled in panic, leaving Sir Jasper facing just a single, nervous foe.

At this point, we had to pack up since our 2 hour slot in the room was over.  Neither side had driven the other off, so there was much discussion about who had won.  Opinions varied...

Well, that was fun!  I've not played Song of Blades and Heroes before, so here are my first reactions: