Hogni's Saga: the fight at the ford

"By the River fettered Fenrir will lie till draws nigh the doom of the Gods."

This week, there was no meeting of the Helensburgh Games Club.  It's in something of a crisis since numbers have plummeted and we're trying to decide what, if anything, can be done to revive it. 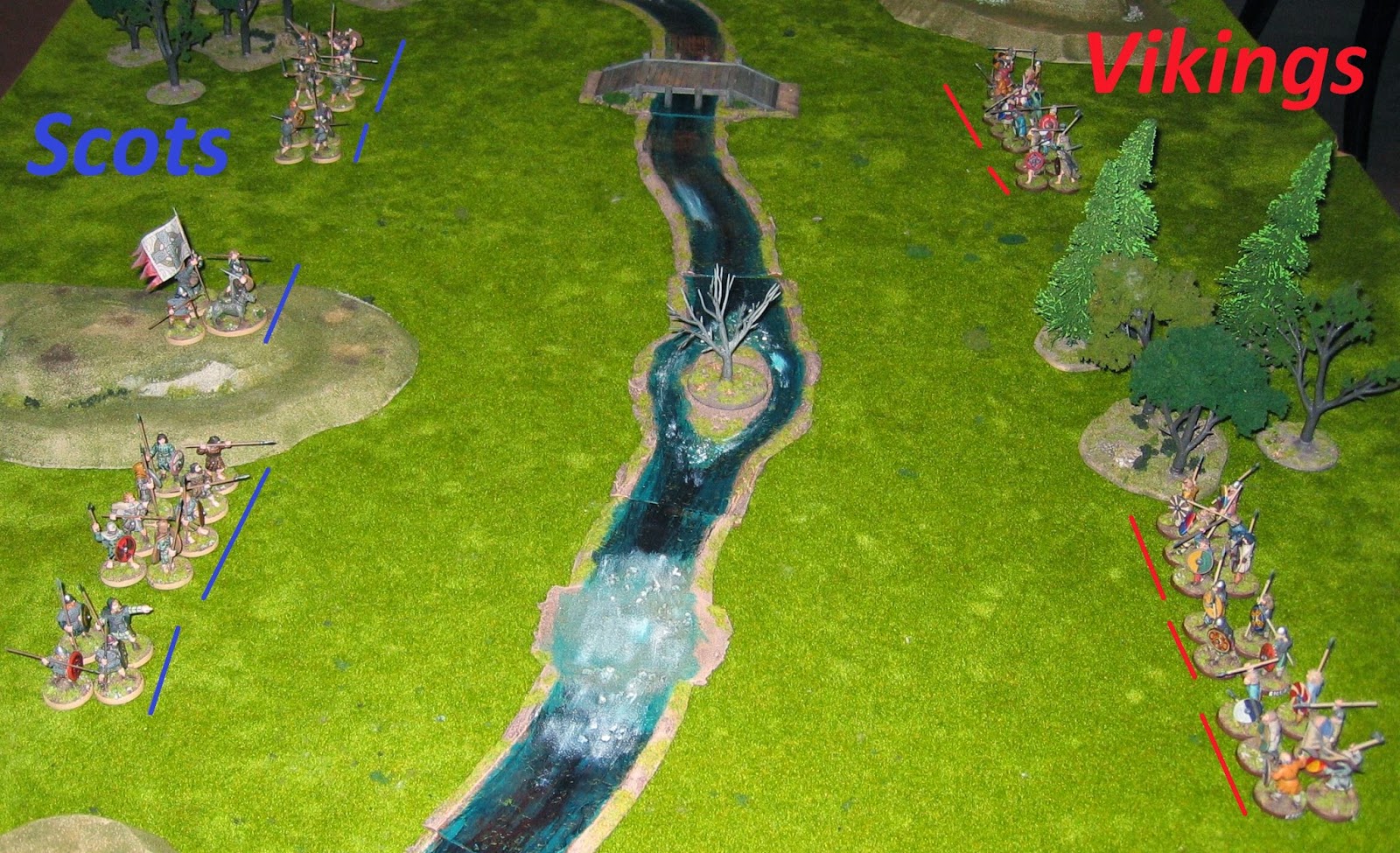 Instead, my sons and I played a game of SAGA at home, so at least my readers can have their regular battle report!

We set up the standard "Battle at the Ford" scenario, with 5 points-worth of troops on each side.  In this game, the field is divided into two parts by a river which is only passable at 2 places (a ford and a bridge for our version).  After 7 turns, the winner is the player who has the most troops on the enemy's side.

My youngest son and I took the Vikings; our plan was for the berserkers to storm the bridge, followed up by a large unit of warriors to hold the ground.  In the south, the rest of our troops would line up on our side of the ford and prevent the Scots from crossing.  Simple, right?


"Týr is the boldest and most courageous, and it is very much up to him who wins in battle. For men of action, he is good to invoke." 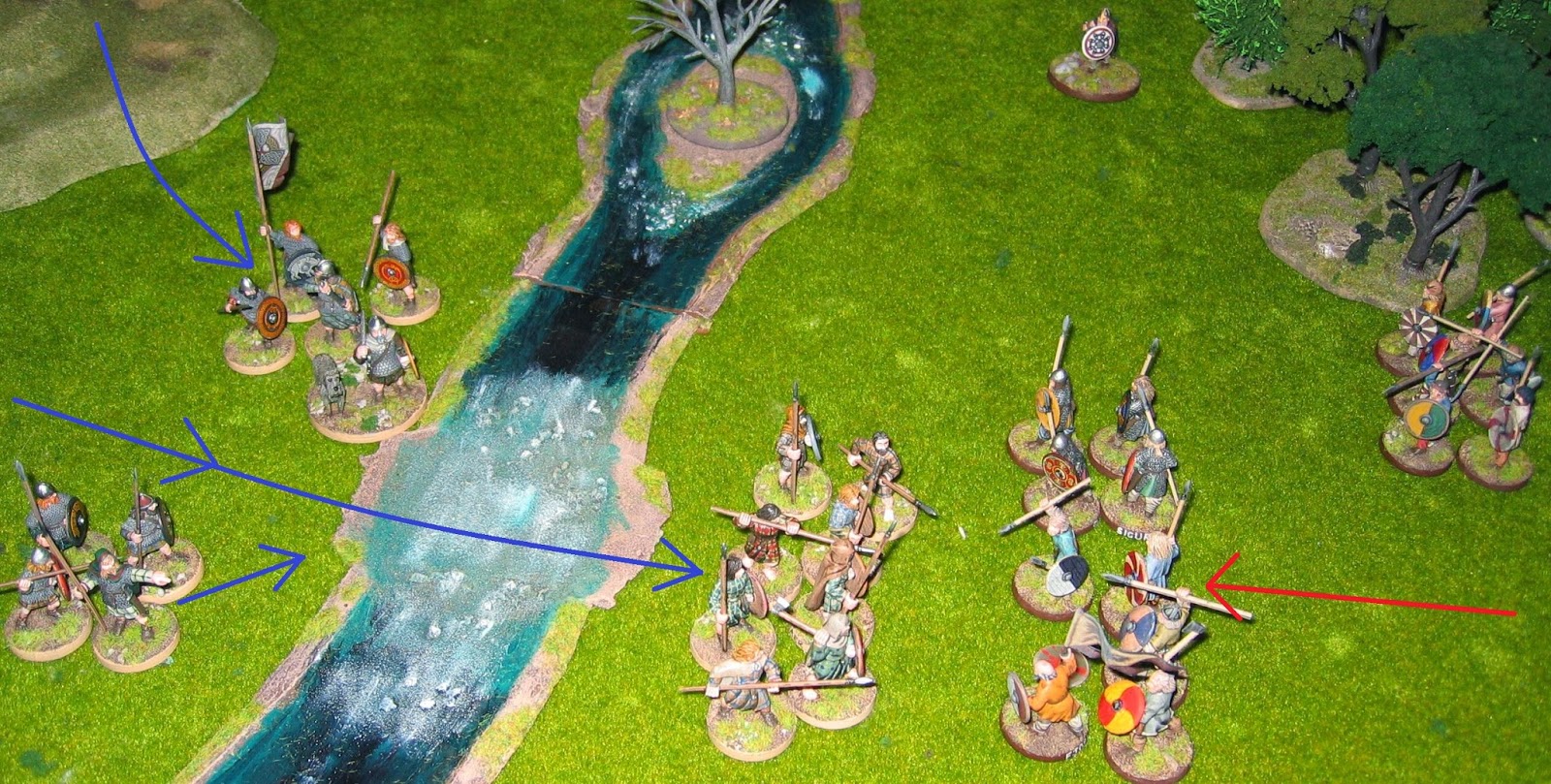 With a rush, the Scots charged across the ford before the Vikings had even realised what was happening.  They used their long spears to Reach, causing the first casualty of the game to the startled Norsemen.

At the bridge, much the same thing happened.  The Scots were most of the way across the bridge before the Vikings could react.  OK, change of plan: we need to stem the flood before we're overwhelmed by the Scots' reserves!

"Falling in battle is the lot of brave men." 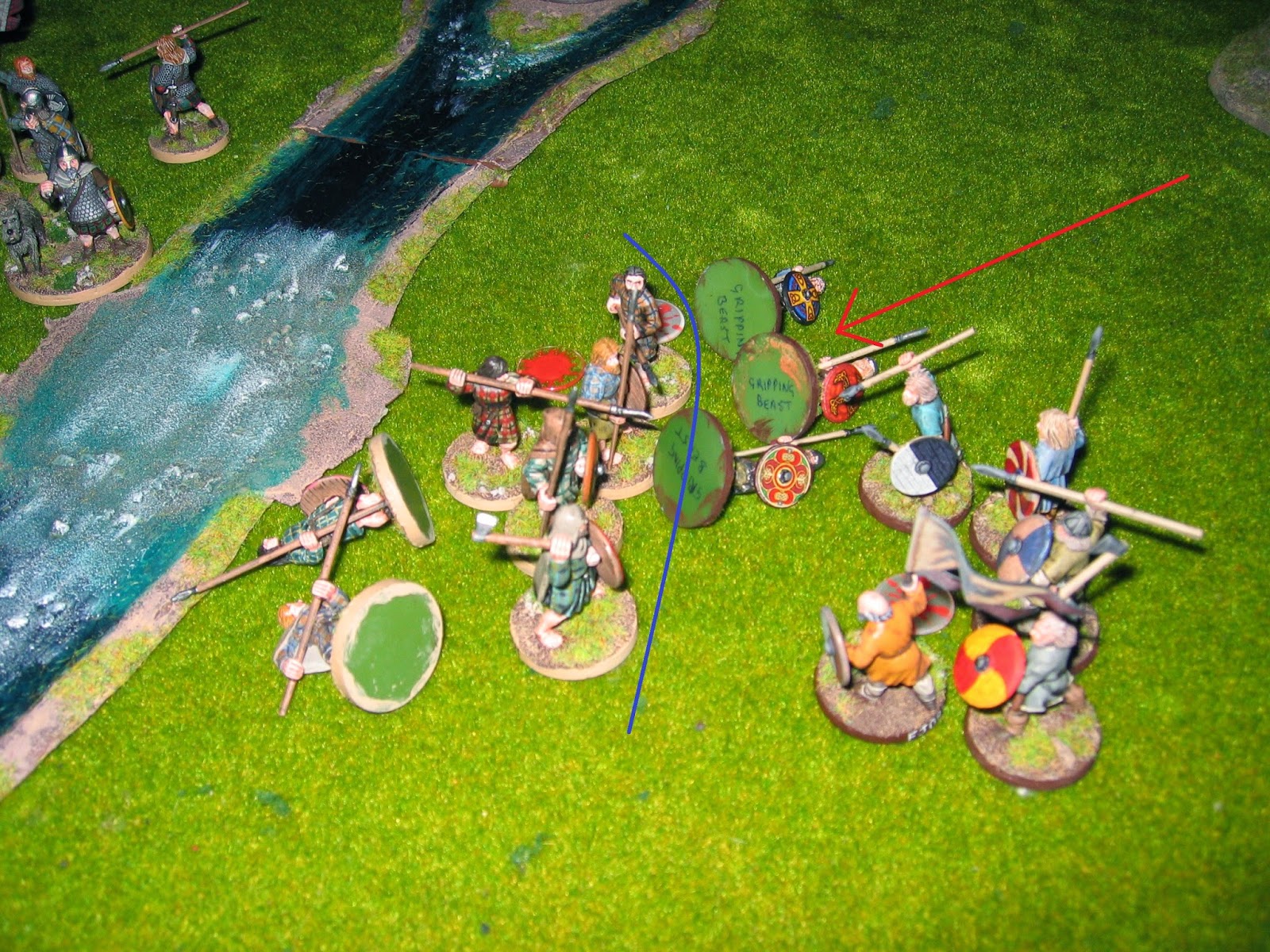 The Viking hirdmen charged in to try to dislodge the group of Scots warriors who had already crossed the river.  Although they felled a couple of the intruders, they were met with A wall of spears and all the hirdmen were slain. 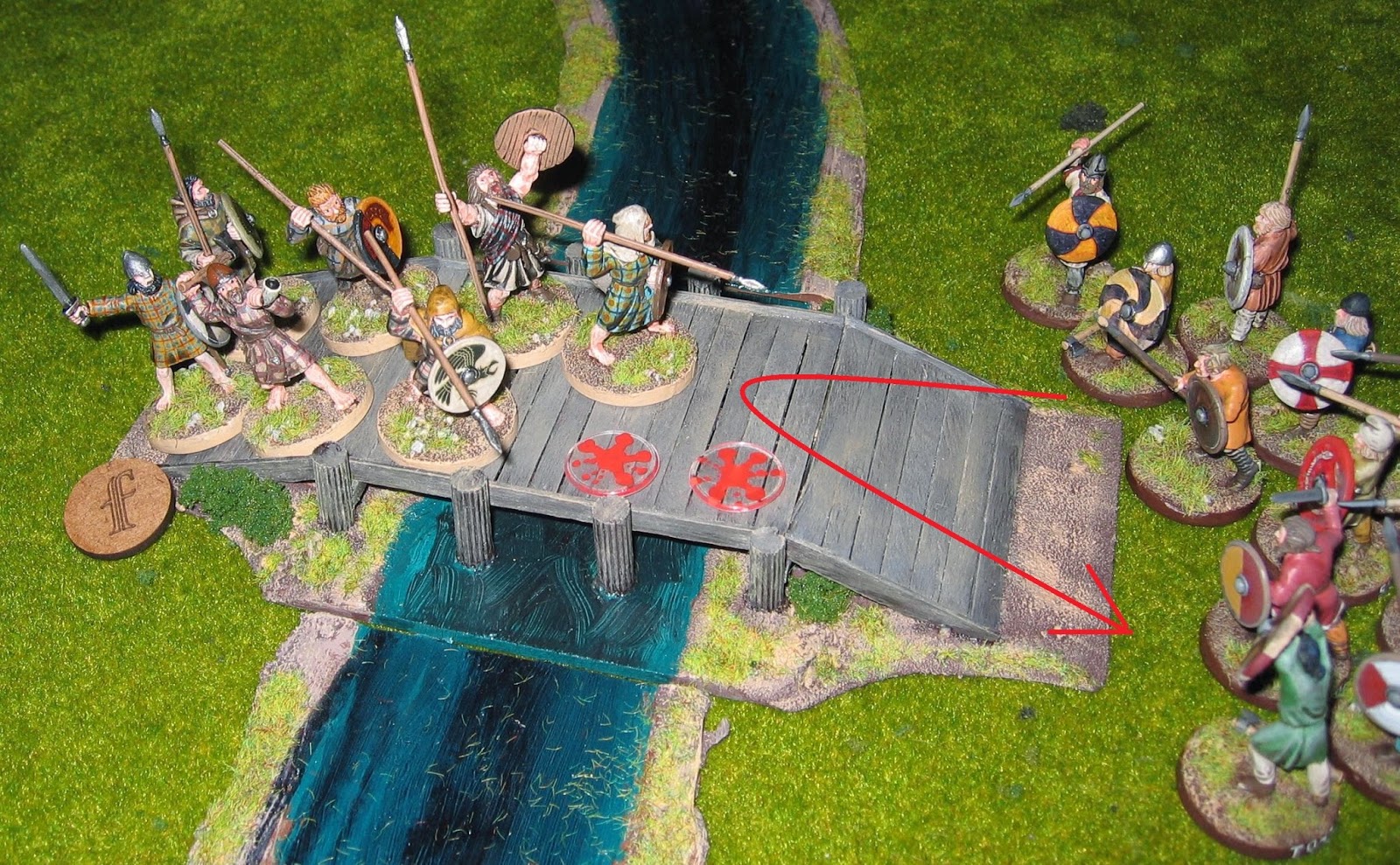 At the bridge, the Vikings rushed the Scots spearmen.  One warrior was slain on each side in a fairly inconclusive fight; the attackers withdrew a short way to consider their next move.  This was not going the way I'd hoped, not at all!

"His own men went to battle without coats of mail and acted like mad dogs or wolves. They bit their shields and were strong as bears or bulls. They killed people, and neither fire nor iron affected them. This is called berserker rage." 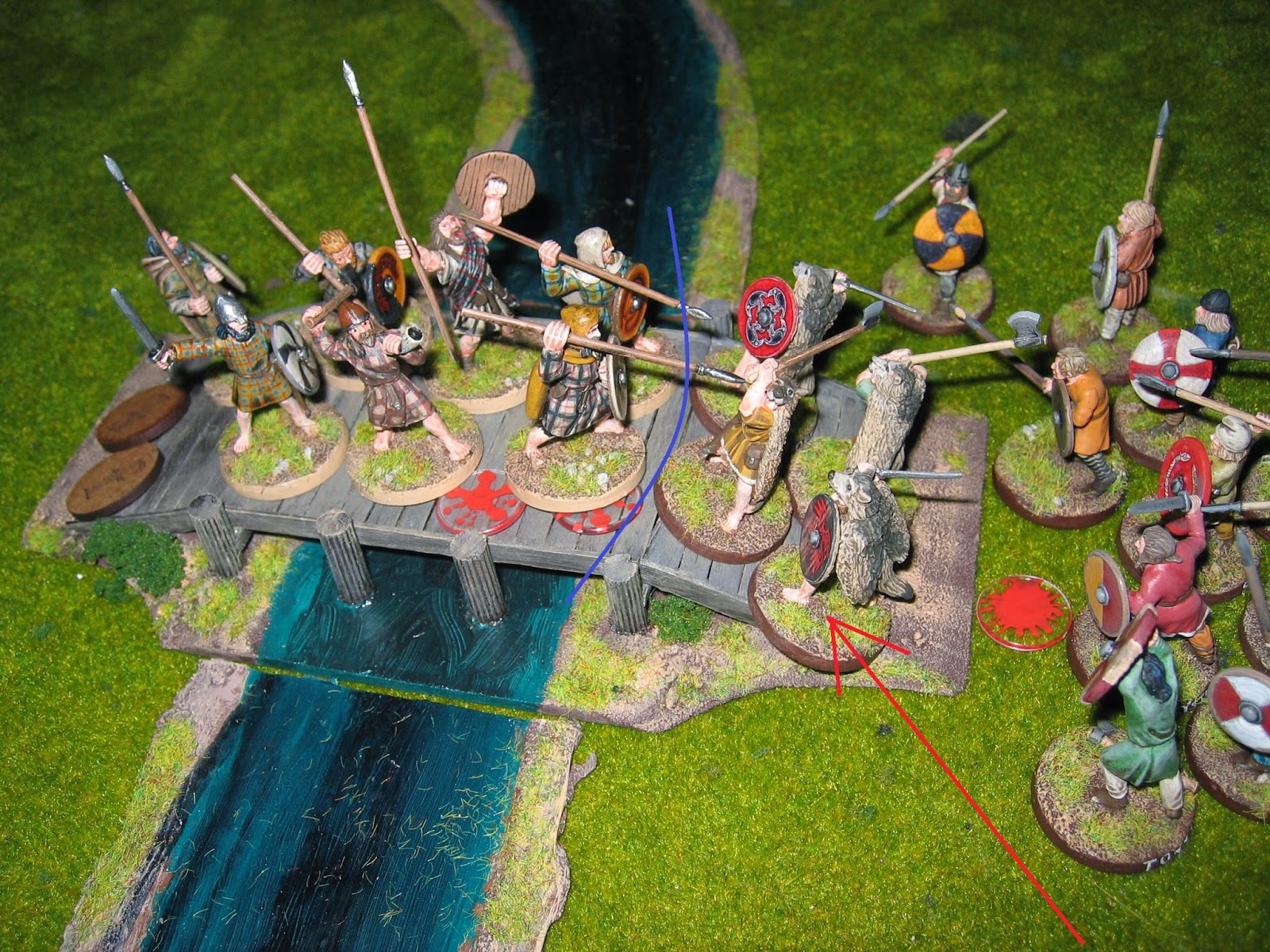 Right, time to send in the berserkers.  Fuelled with the power of Ullr, the 4 frothing Viking fighters charged at the tired Scots warriors on the bridge.  Let's see now: 16 attack dice, hitting on 3+ (because of Scot's fatigue) and re-rolling any misses (Ullr) - that should do the trick! 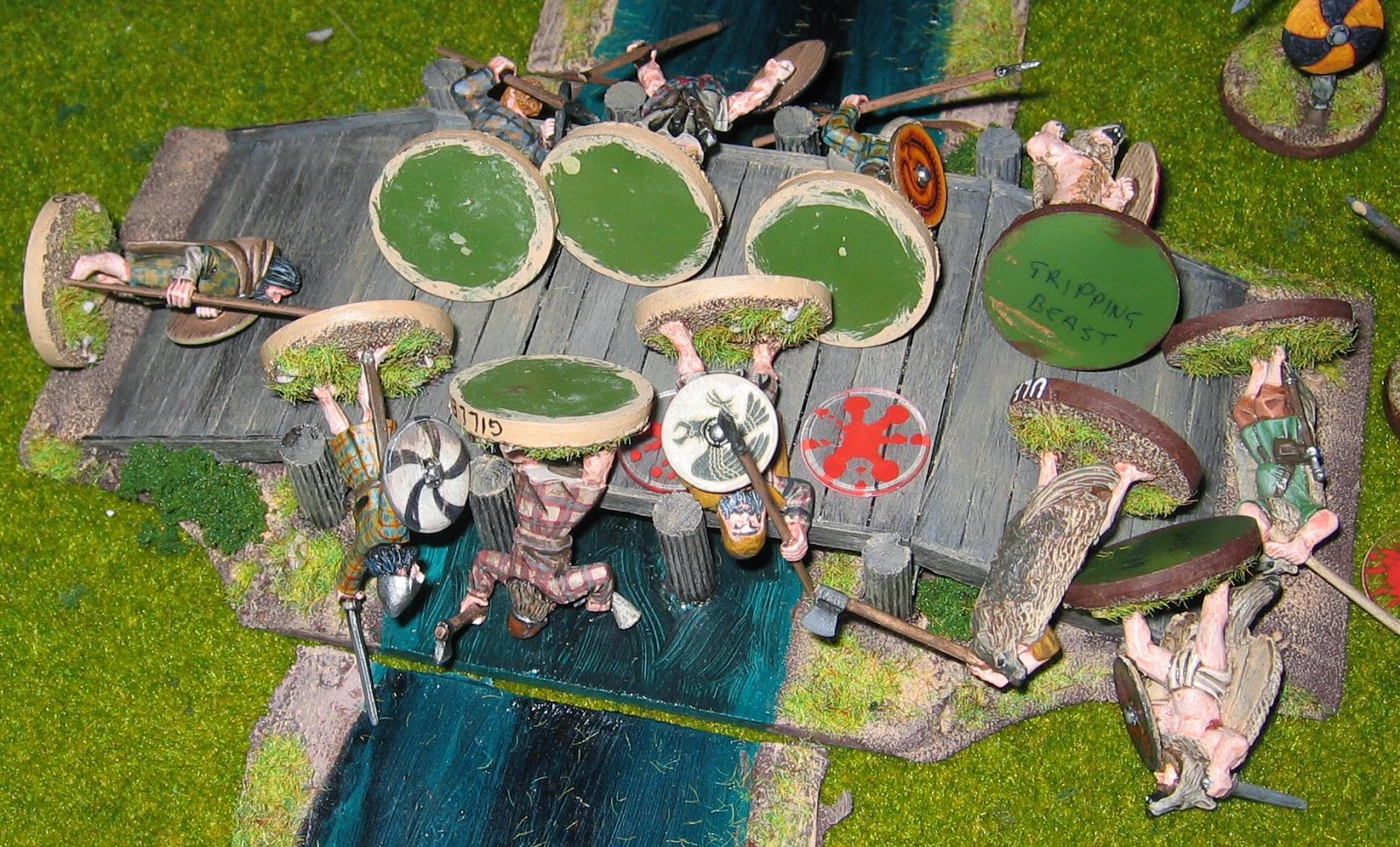 Of course, one thing about the berserkers is that they're not wearing any armour and are therefore rather easier to hit than average.  They cleared the bridge, but all died in the process.  Not quite what I had in mind...

"To Odin many a soul was driven,
To Odin many a rich gift given.
Loud raged the storm on battle-field,
Axe rang on helm, and sword on shield." 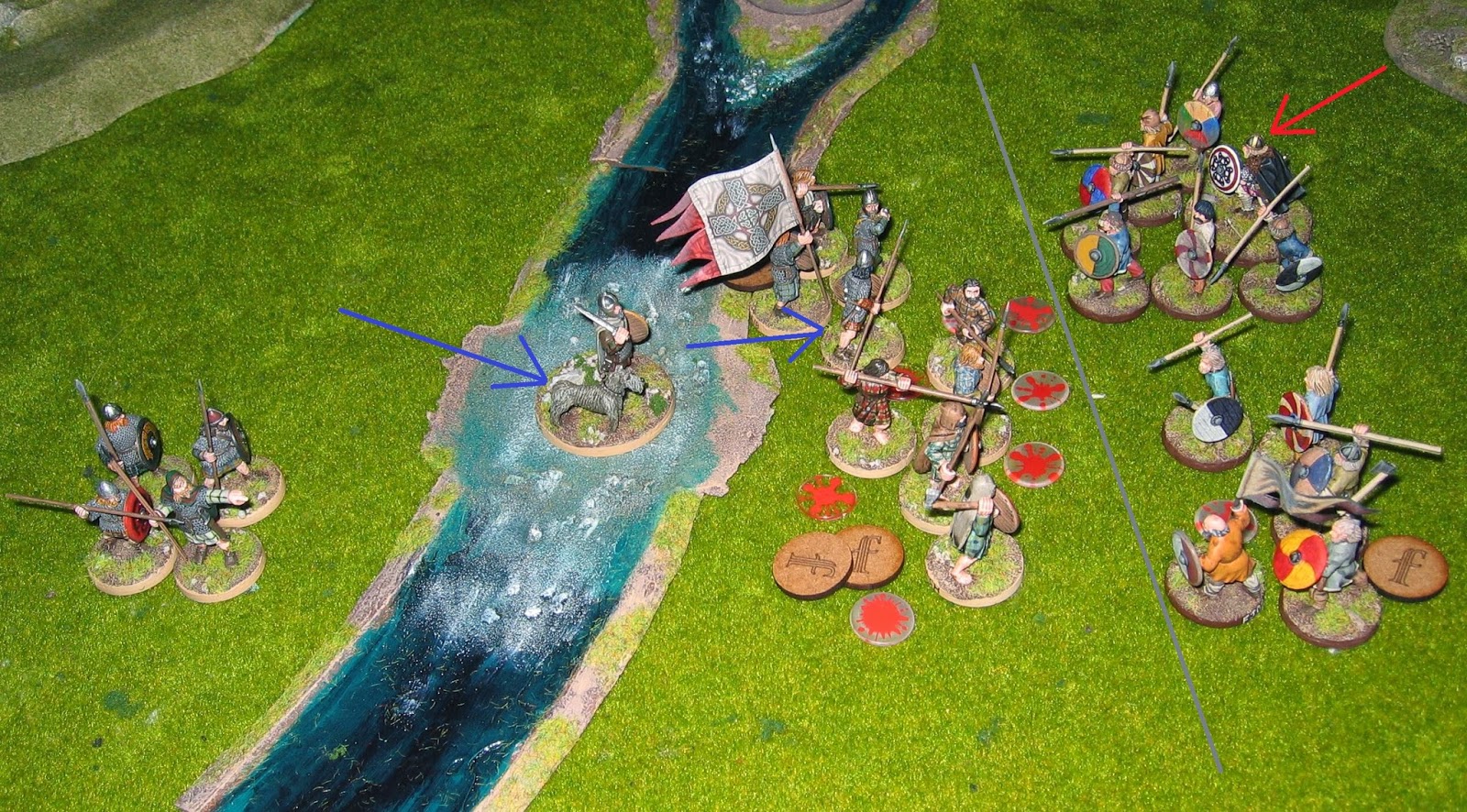 At the ford, both sides rushed in reinforcements, including their respective warlords.  The Scots had more men and most of them were thanes (hearthguard class) against the Vikings' Bondi (plain warriors), so it was looking grim for myself and my young apprentice. 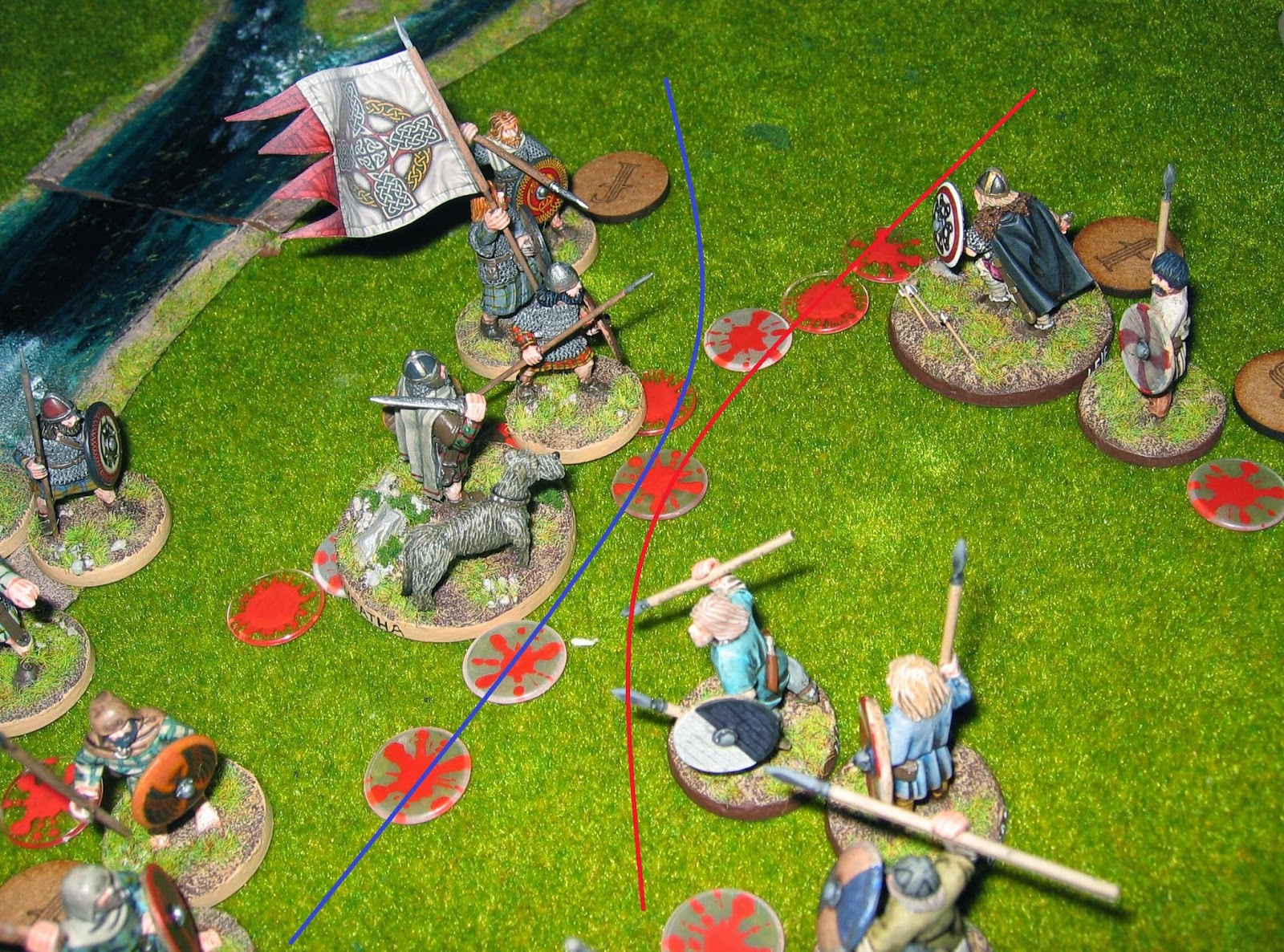 Casualties started to mount up on both sides - but the Scots had the better of it.  They could afford to trade man for man, but the better-armoured thanes were cutting down the Viking Bondi faster than they were taking losses themselves.

"Do you see there that all our men have fallen, and it appears to me most likely now that we will be Odin’s guests in Valhalla tonight... We will never flee from our enemies but rather endure their weapons." 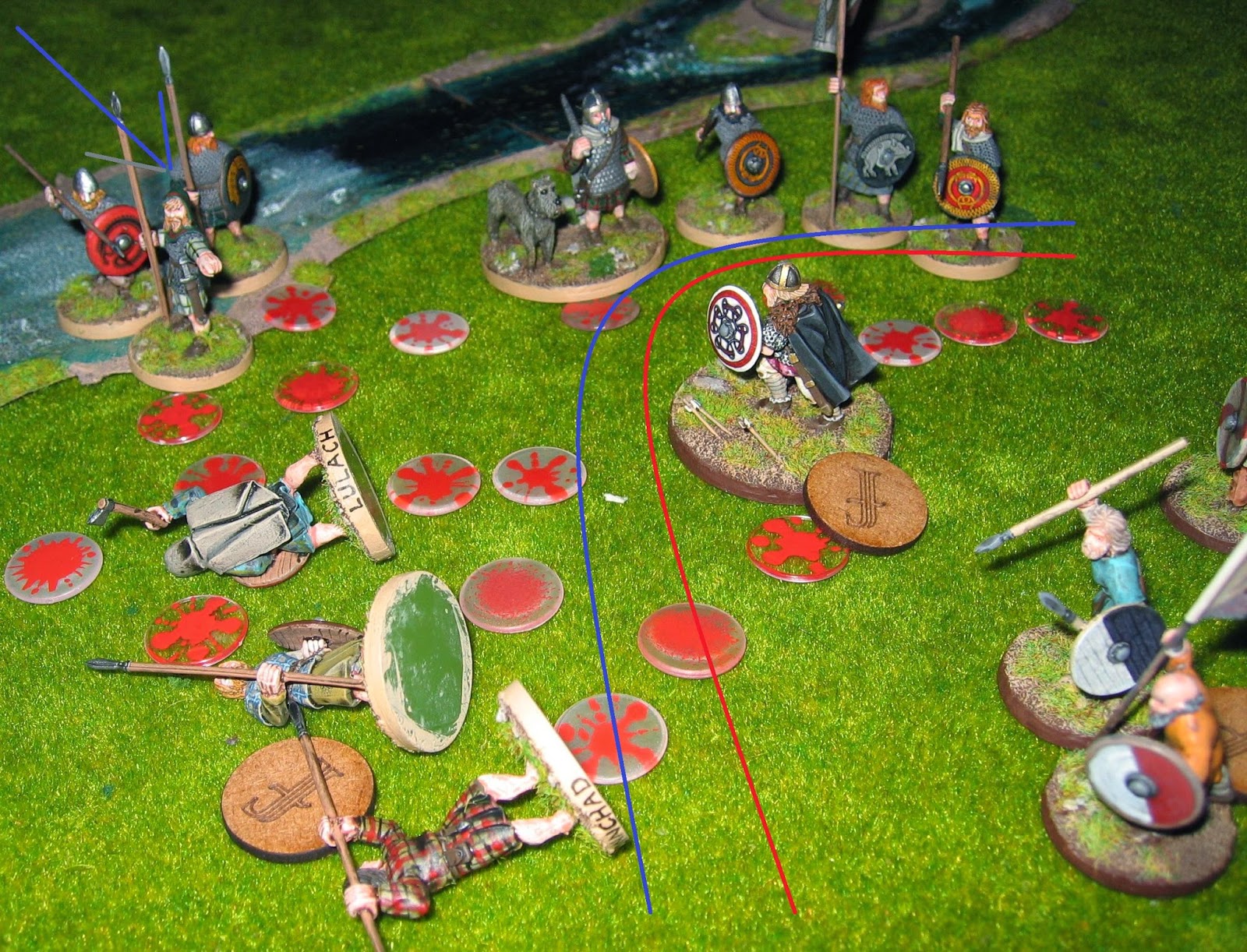 The Scots warriors joined in as well, defeating their opposite numbers and causing the bondi to fall back and leave Leif gunnarson (the warlord) exposed.  The Vikings took great pleasure in using the power of Loki to wipe out the remnants of the Scots warriors immediately after this (Loki only works on units of 3 or fewer warriors or levy; the Scots warrior unit lost a man in their victory over the bondi).  So, that brings the odds down to 6 thanes and Macbheatha, the enemy warlord, against Leif and 3 bondi.  Not good odds!


"Each man must at one time die. No one may escape dying that once, and it is my counsel that we not flee, but for our own part act the bravest." 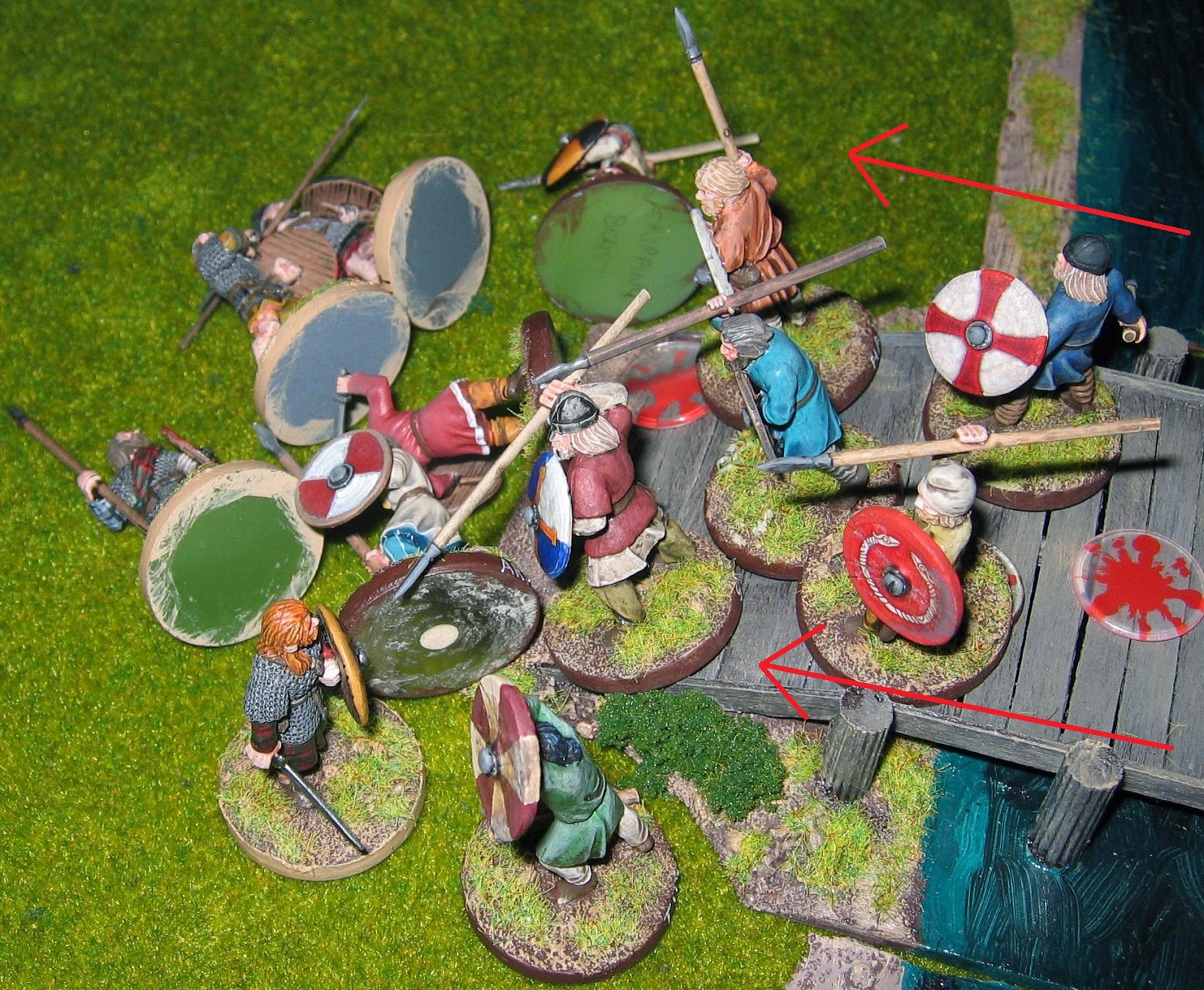 The warriors at the bridge surged forward, but found their way blocked by a thin line of Scots thanes.  In a bloody encounter, 3 men from each side fell and the Vikings pulled back to lick their wounds. 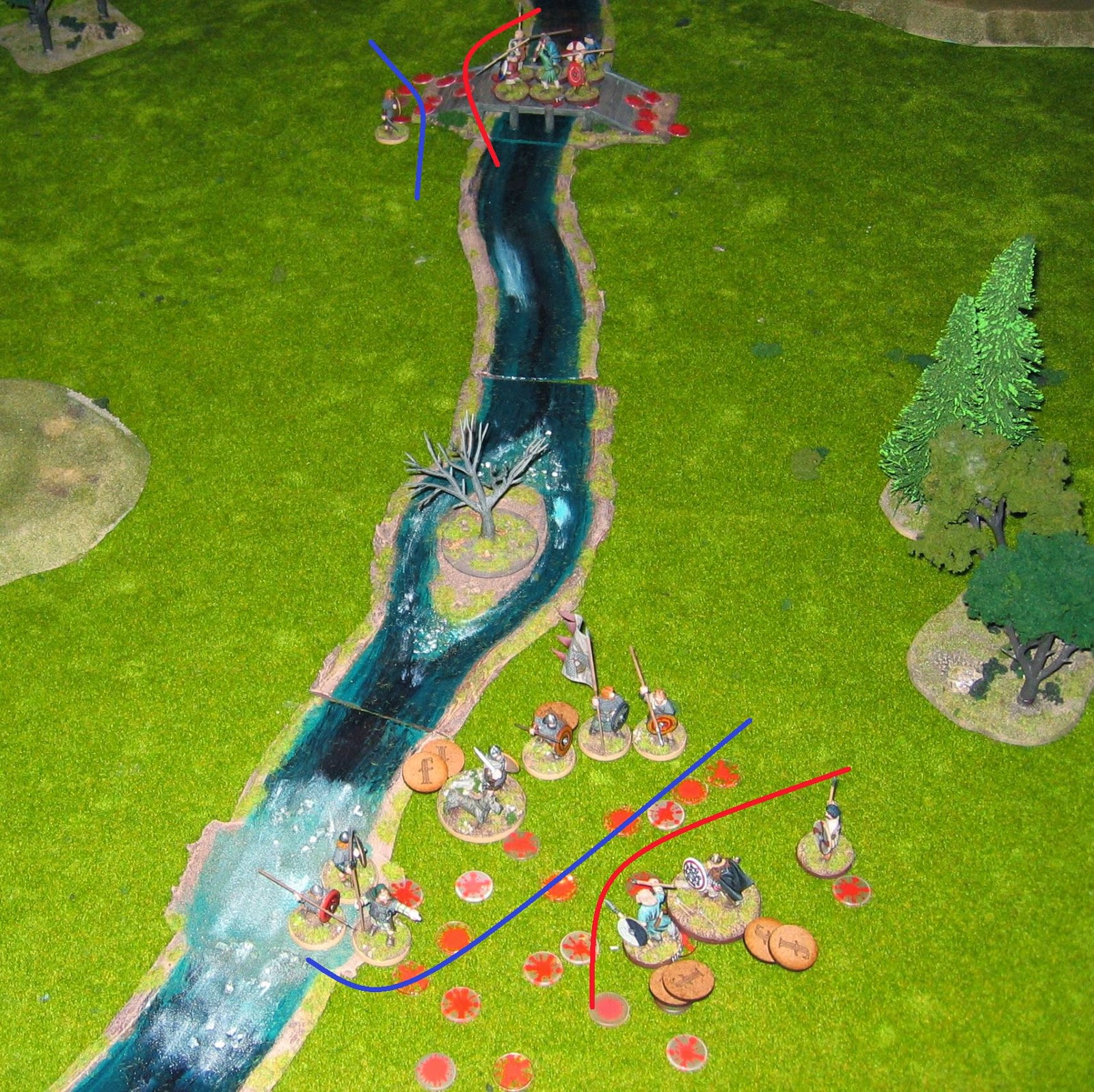 At the start of turn 6 (of 7), the Scots had 9 victory points for figures on the opposite side of the river (1 warlord and 3 thanes) against 0 for the Vikings.  The ford and the bridge are too far apart for reinforcements from one to reach the other before the end of the game.

"When the watchman of the gods shall blow the shrieking horn, the warrior sons of Othin will be summoned to the final battle." 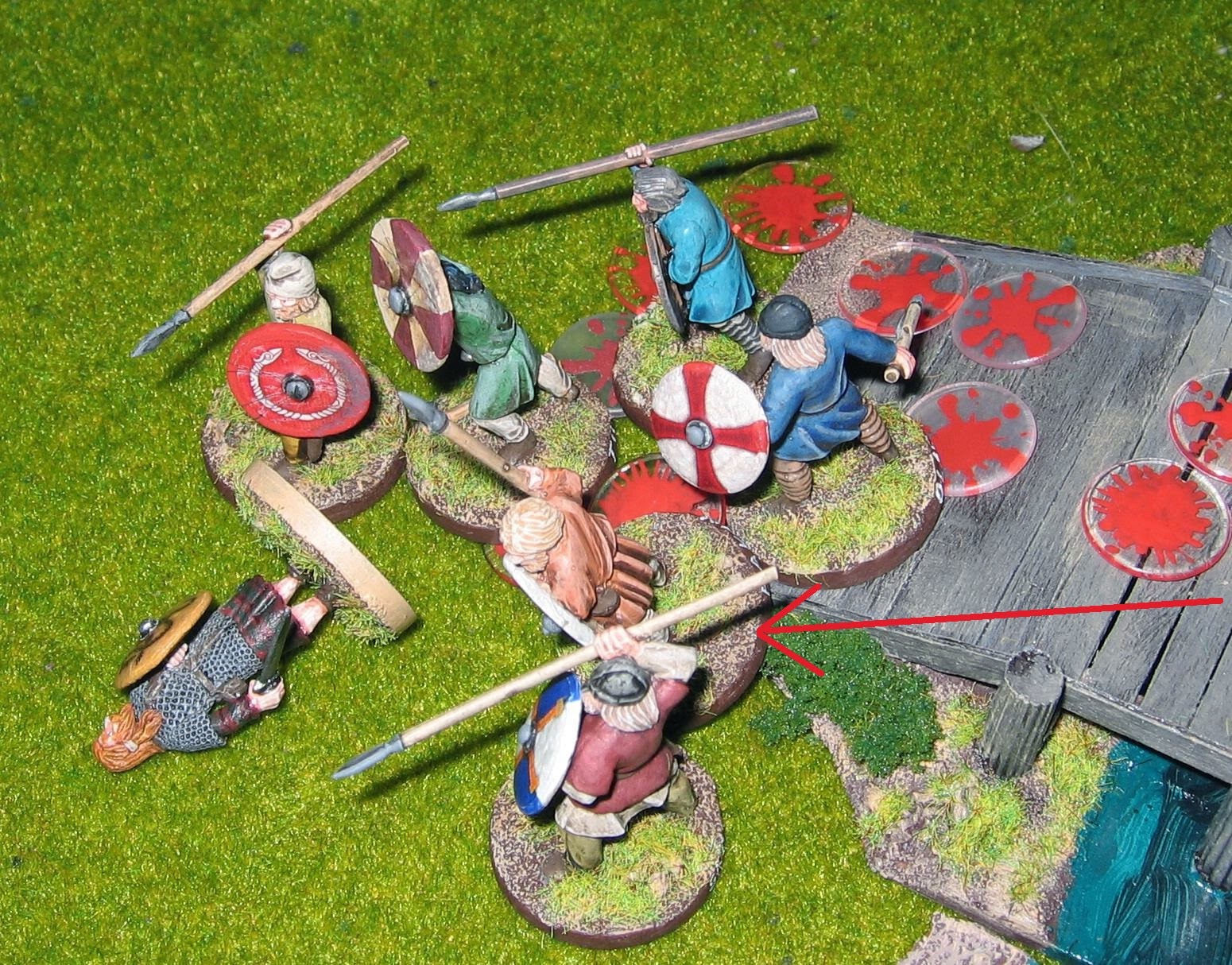 First things first: the 6 warriors at the bridge charged at their sole remaining foe.  Even though the Scots thane tried to Hold the Ground, he was overwhelmed for no loss to the attackers.  At least that's 6 victory points to the Vikings which cannot really be challenged. 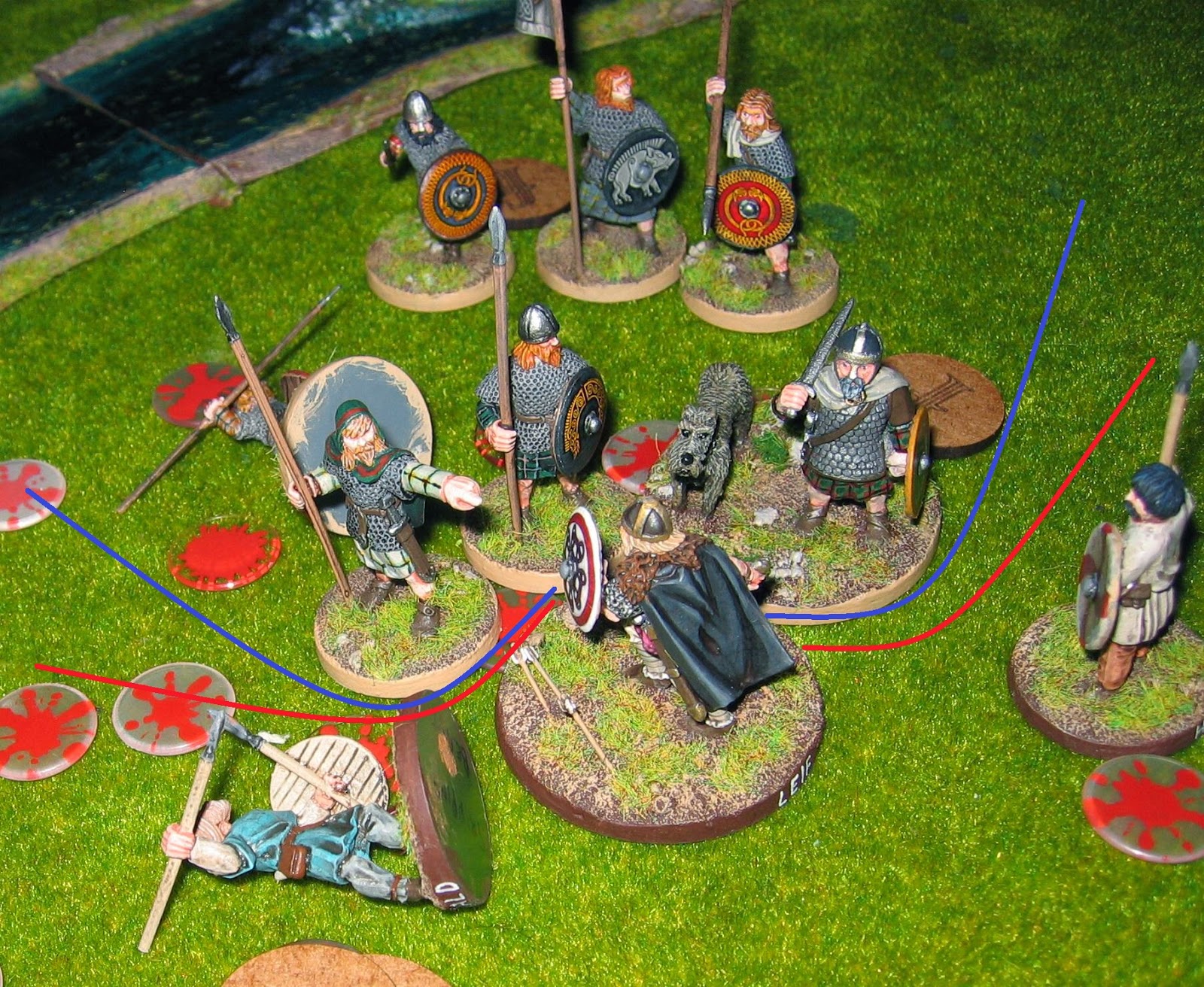 Now the 2 warlords and their bodyguards set to and fought each other.  The initial clash left 1 dead on each side, but the Vikings couldn't afford that rate of exchange. 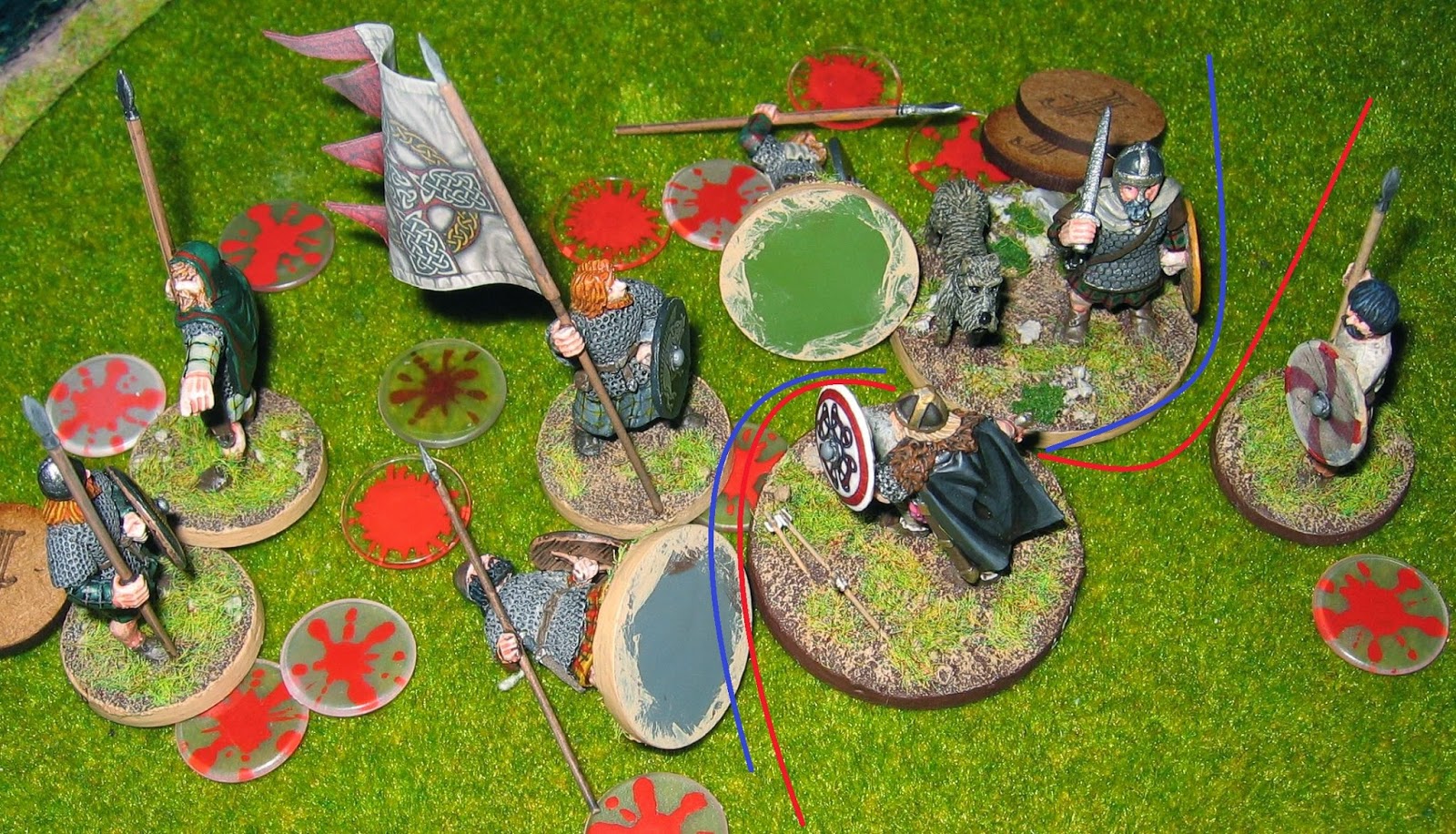 Macbheatha and his thanes attacked the Viking warlord, but in a burst of enthusiasm, Leif slew 2 of these enemies and sent the Scots warlord reeling backwards. 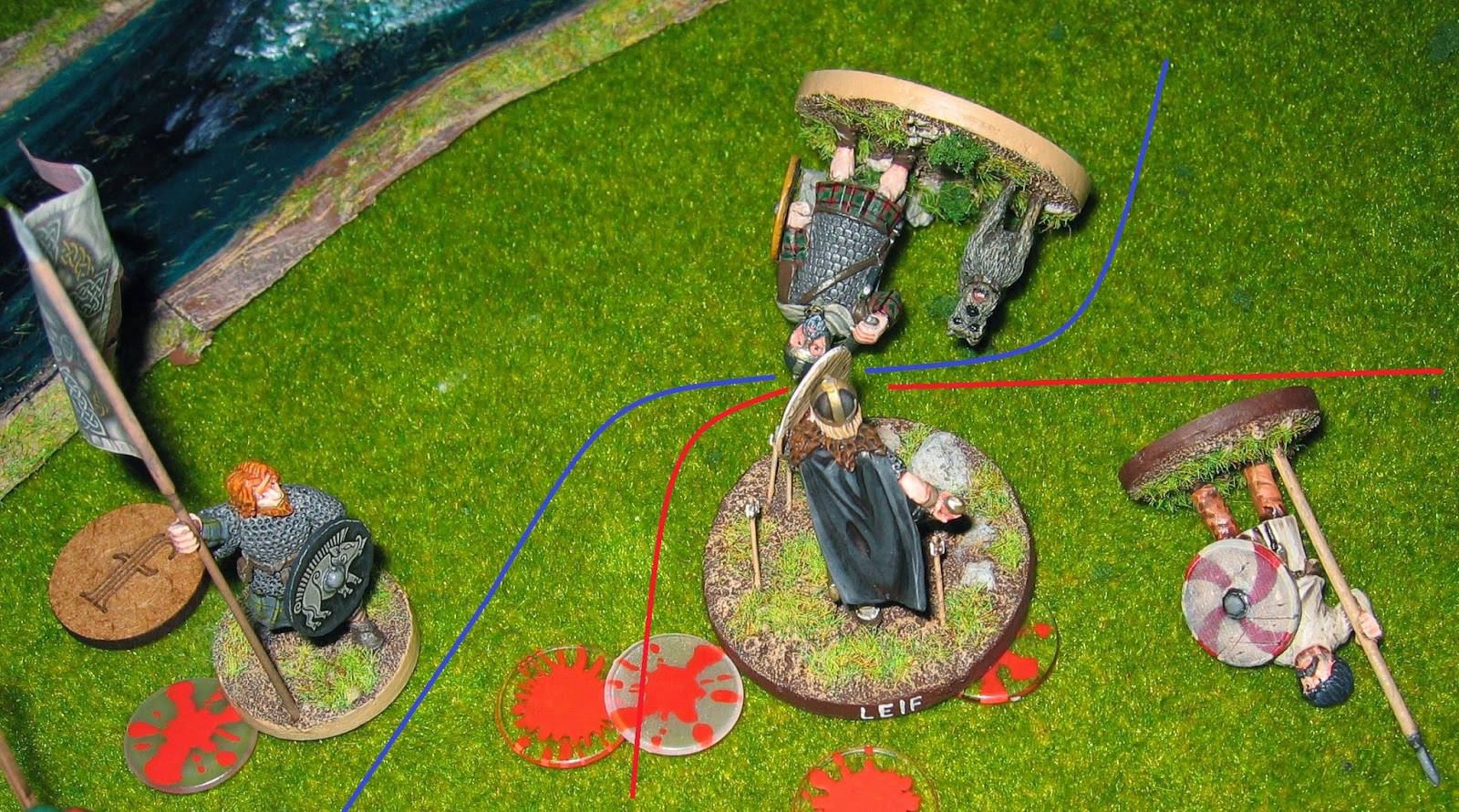 Sensing a change, Leif called out to Hogni, his last remaining warrior.  "Come on lad!  Let's finish this b*stard off!"  Hogni was fired up with thoughts of Heimdal and gained a number of attack dice, though at the cost of leaving himself more vulnerable.  Whilst Leif and Macbheatha circled each other warily, Hogni charged in and delivered a mortal blow to the Scot.  He didn't escape injury himself, though: the brave warrior collapsed and lay bleeding after his ferocious attack. 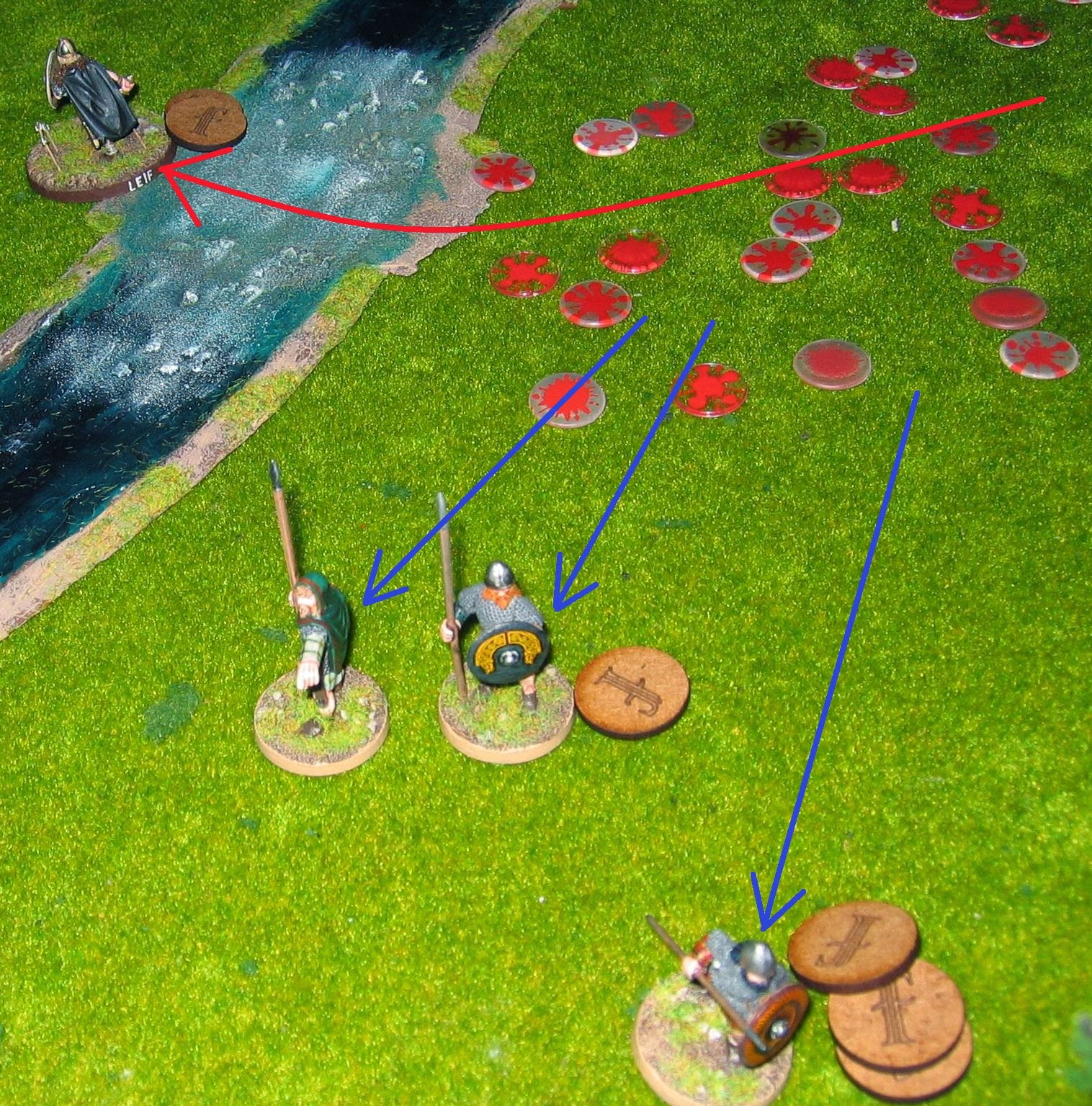 Turn 7 - the last turn of the game.  The remaining Scots thanes pondered whether to attack Leif, but decided that this would be very hard to achieve with just 2 SAGA dice.  Instead they fled, hoping to preserve the 6 victory points that they represented.

The final act of the game was for Leif.  He could have tried to chase down one or more of the Scots, but there was a risk that he would fail to kill any; this would leave the scores tied at 6 points each.  Alternatively, he could cross the river himself and thus add 3 more victory points to the Viking total.

Weary and bloodstained, Leif jogged across the ford and the Vikings claimed the victory, 9 points to 6.  Hogni's valour would be remembered for many a day!