For several months now I have been looking for a Celtic Cross.  Although these days such crosses are most likely to be seen as tattoos or jewellery, I'm thinking more of the large stone monuments that were common near churches and holy sites during the early middle ages.  In other words, I was looking for a piece of scenery for my 28mm games of SAGA!

It's been surprisingly difficult to find what I need.  I did discover one model from a wargaming company a long time ago, but I felt it wasn't suitable for me.  I can't even remember why that was; perhaps it was the wrong scale, or the international postage was too high.  Maybe it was some other reason.

Then I found, almost by accident, that there is a huge variety of moulds of different objects sold on eBay.  These are intended primarily for cake decorating, but a silicone mould can be used for a wide range of materials as well as for chocolate!


Most of the moulds I found are of little use to me (flowers, birds, scrollwork and the like) but I did find one for a Celtic Cross.  So, I spent the necessary £3-and-a-bit and the mould was with me in just a couple of days. 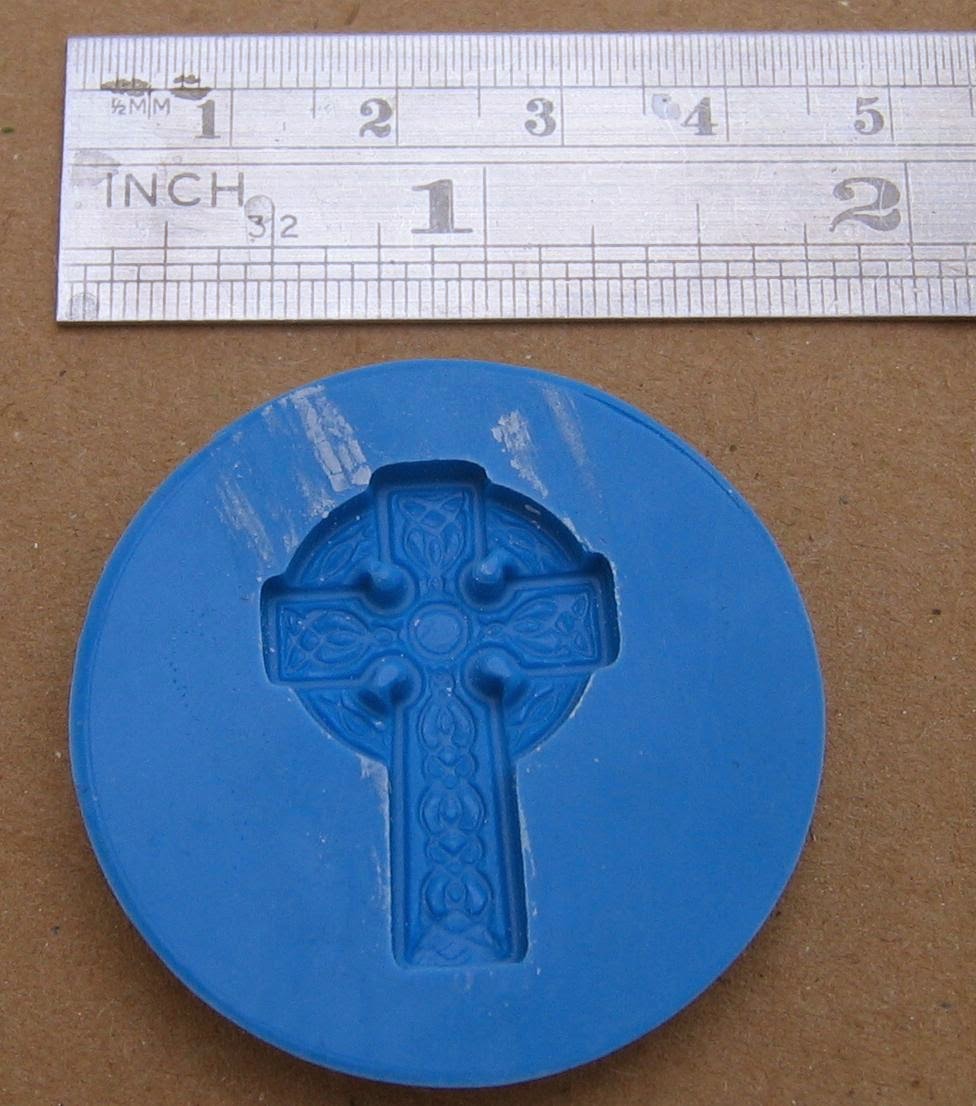 The mould itself is about 45mm (1.5") across and is made from blue silicone rubber.  As such, it's heat resistant; the inset claims that it is suitable for casting in chocolate, marzipan, wax, soap, plaster and a number of other materials. 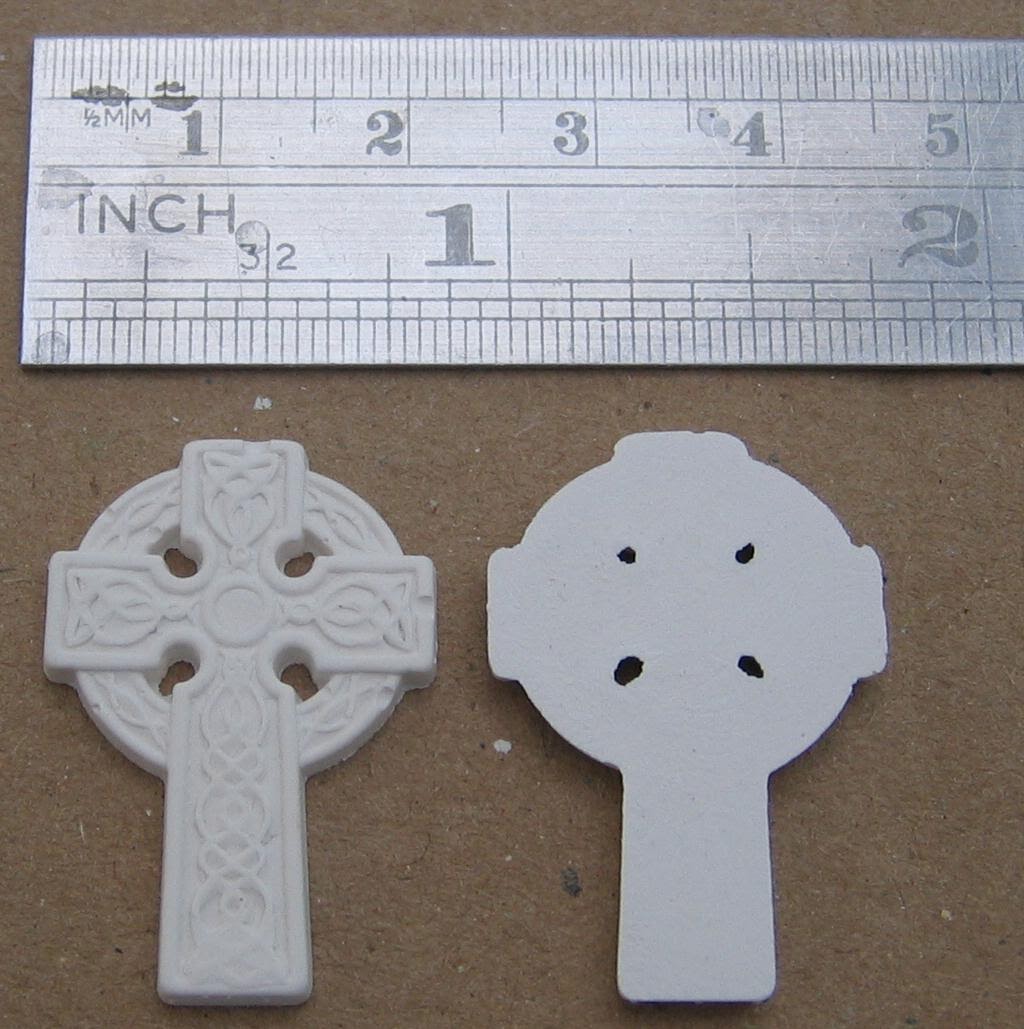 I decided to use casting powder (aka "dental plaster" or "hydrostone"?) to make my model.  I do like marzipan, but I had doubts as to how well it would take paint and glue.  As for soap...

So, I cast 2 crosses from the mould.  These are quite thin; I smoothed off the backs with some coarse sandpaper.  The 2 parts were then glued together, back to back.  I needed to add a little filler around the seam, but that wasn't too hard. 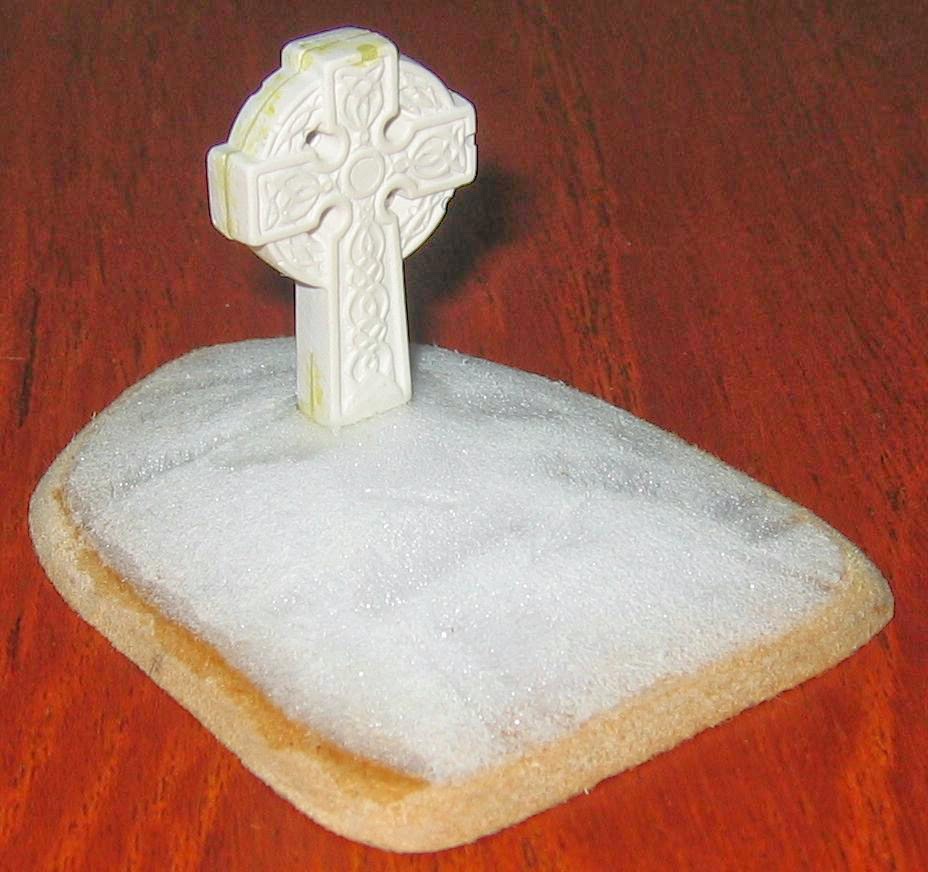 My cross was going to be on a little hillock.  I used a little piece of MDF as the base and added some foam sheet on top of that.  This was then sculpted (by hot wire cutter and sandpaper) into a small knoll.  I pinned the cross to the hill with florist's wire, though it might have been enough just to glue it without such reinforcement. 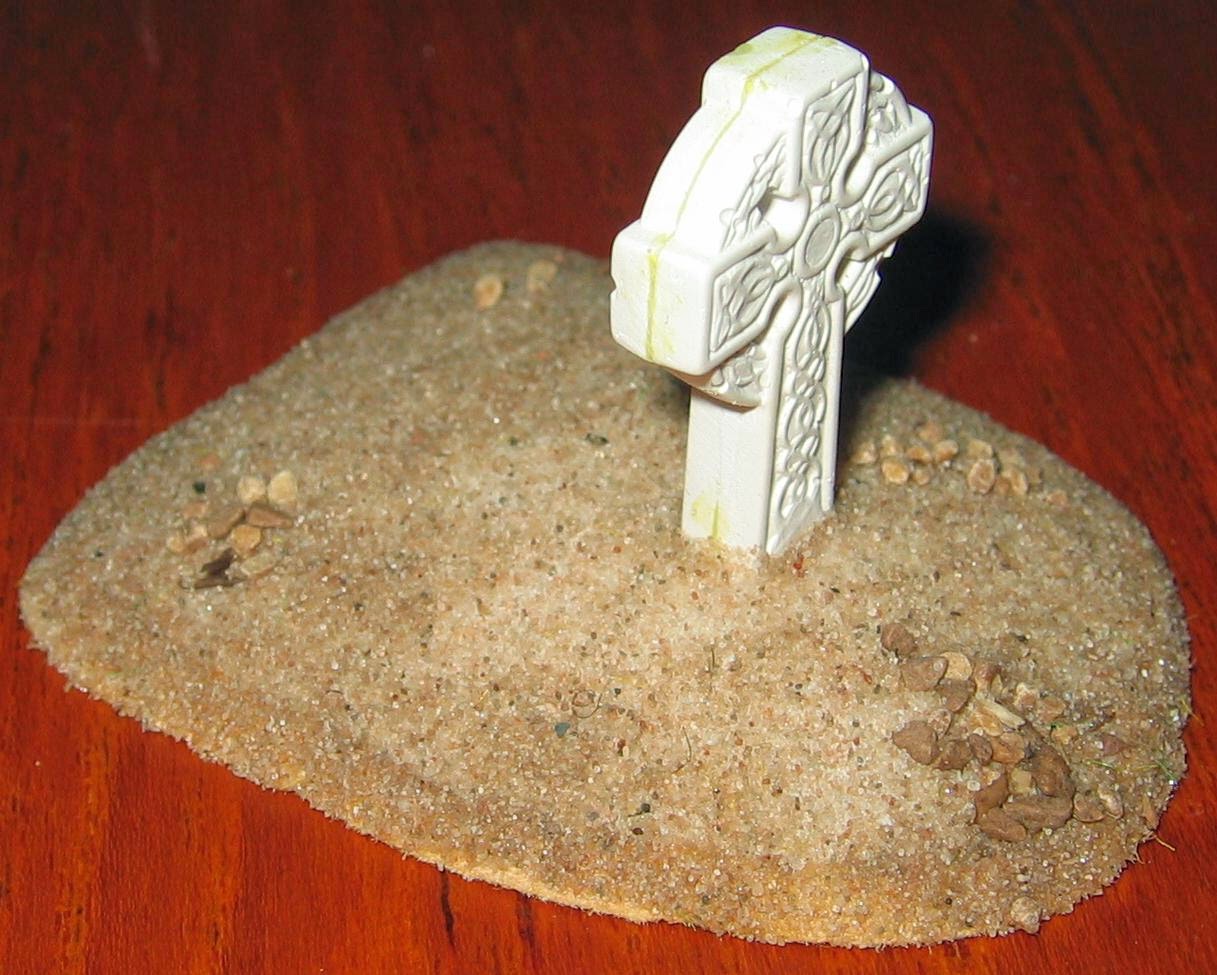 Next, the base was coated with white glue.  I added a few small clusters of grit and then covered the rest with clean sand (taken from the kids' sand pit, dried and sterilised). 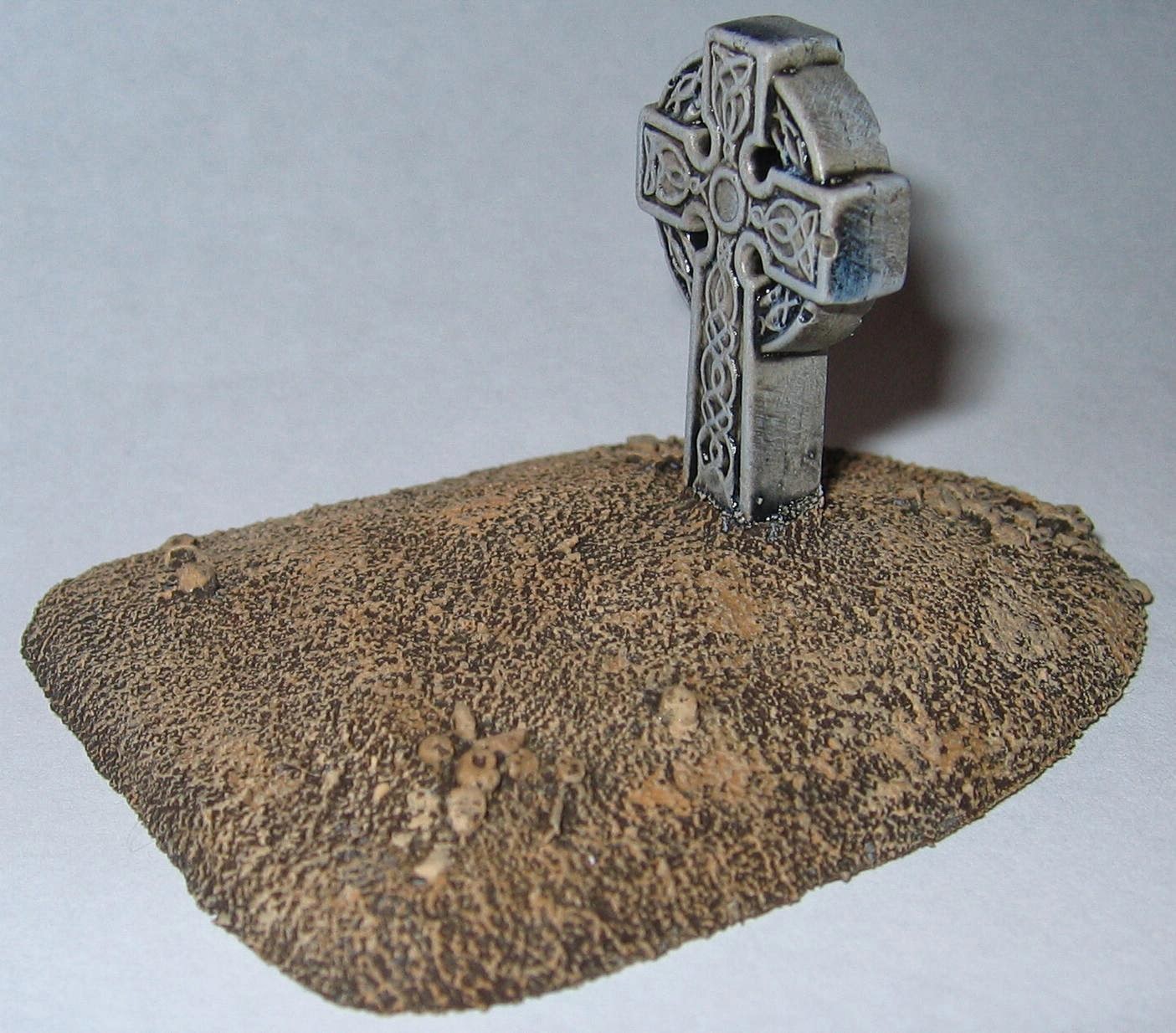 This was a very simple model to paint.  Firstly, it was sprayed with grey undercoat.  The cross was given a black wash and was then drybrushed lightly with a pale grey.  The dirt was painted in a dark, chocolate brown and then drybrushed twice with successively lighter browns. 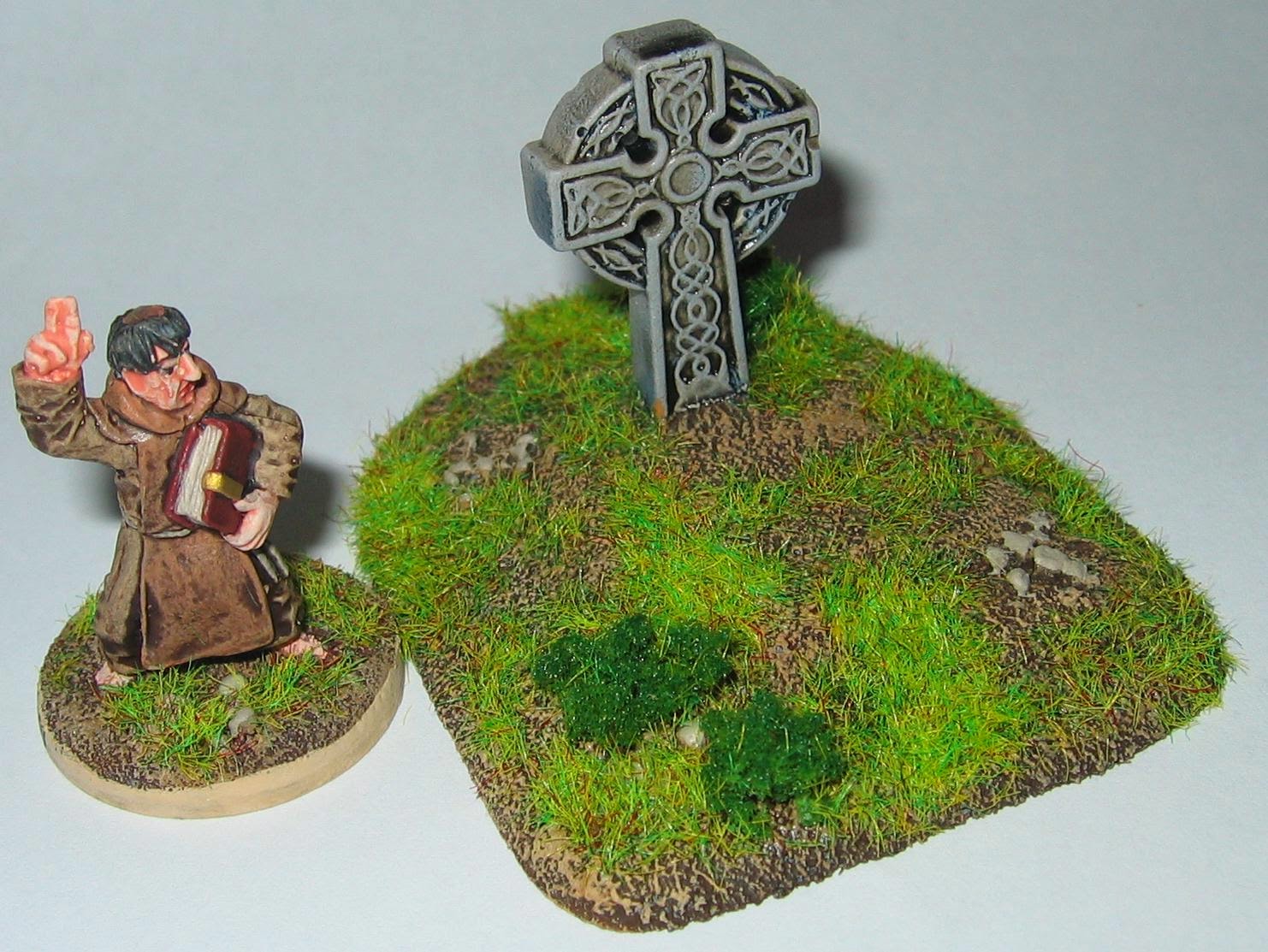 To finish, I glued a fair amount of static grass to the base.  Some clumps of foam were used as bushes.  Finally, I touched the larger lumps of grit with a stone grey paint (I should have done this earlier, before adding the grass, but I forgot).  I'm not totally happy with my basework, but it'll have to do.

So there it is: a Celtic Cross suitable for use with 28mm figures.  I don't think it would look amiss with 20mm or 15mm figures either, though obviously it would represent a correspondingly bigger monument.

I shall probably use it as an objective in the SAGA "Sacred Ground" scenario, or maybe just as scatter scenery.  If/when I ever get round to making my Celtic monastery (Scheltrum Miniatures has just the right buildings!) then this will fit in perfectly.  And of course I can make as many more of these as I want, any time!