2 weeks ago, I talked about my 28mm Junkers Sandrunners.  These 2-legged lizards and their riders are pretty weird, even for a science fiction army.  However the original VOID 1.1 range had some elements in the same force which are (in some senses) much more conventional.  It's time to talk about the Junkers vehicles! 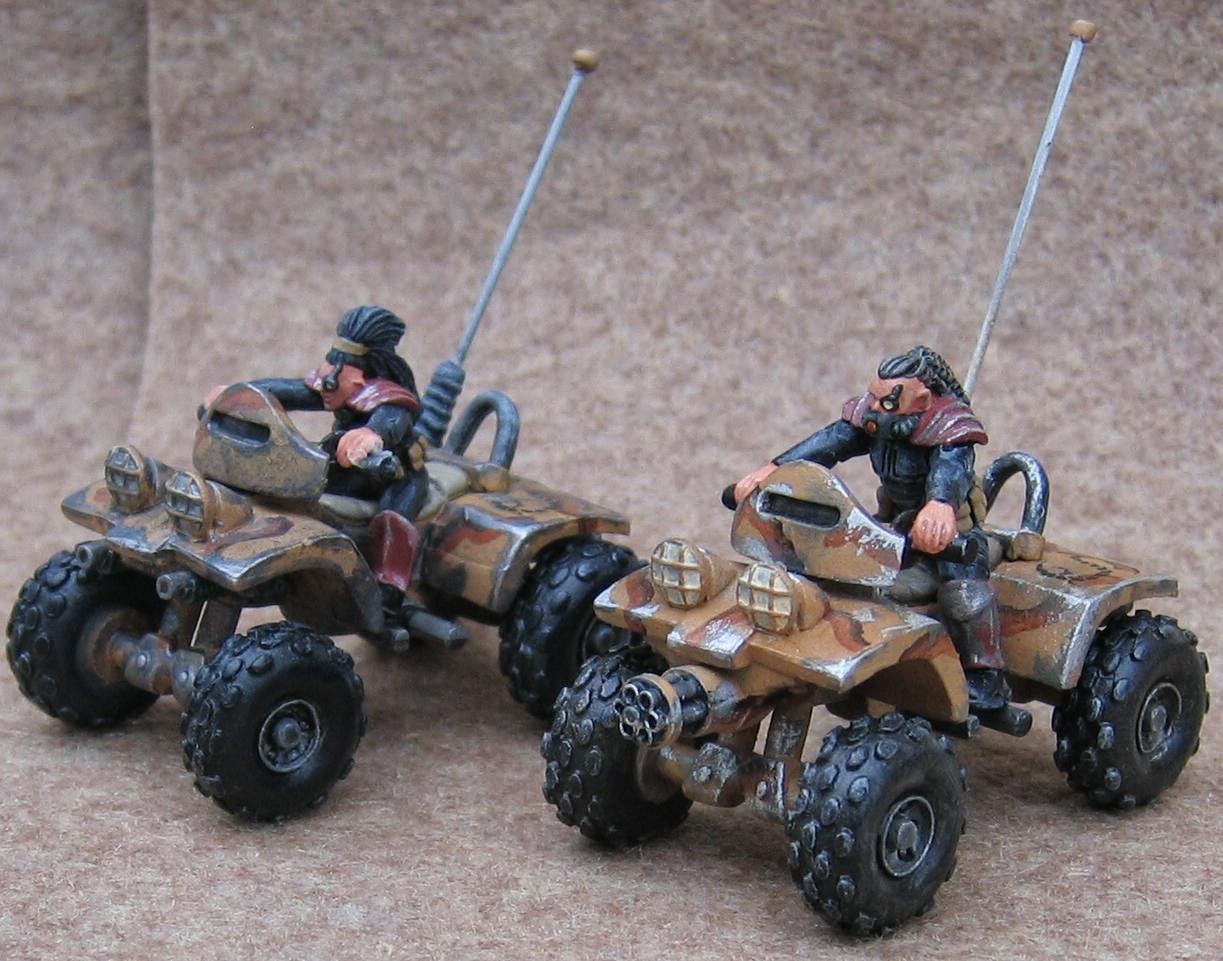 In the picture above are both variants of the basic Junkers quad bike.  On the left is the standard model, armed with "twin combat shotguns", while on the right is a decurion (NCO) with a chain gun/rotary cannon.  Note that I've replaced the cast metal aerials with a piece of steel wire (for strength) topped with a tiny bead (so that you don't impale your hand when picking up the model).

As quad bikes, these models are quite large.  That's OK - I can imagine them carrying a passenger as well as the driver, or perhaps a small amount of cargo.  They have well-spring suspension and look capable of travelling cross-country at high speed.  So far, so good.

Where my suspension of disbelief breaks down on these is with the weaponry.  Mounted weapons of any kind on a quad bike would be extremely difficult to aim, especially if the driver is being bounced around whilst moving over rough terrain.  OK, I could easily enough imagine that the "combat shotguns" (which in real life would be for fighting room-to-room in built-up areas?) are actually assault rifles or light machine guns, but that still doesn't get around the aiming problem.  Also, I don't see where is the ammunition supply for such high rate-of-fire weapons.  Hmm. 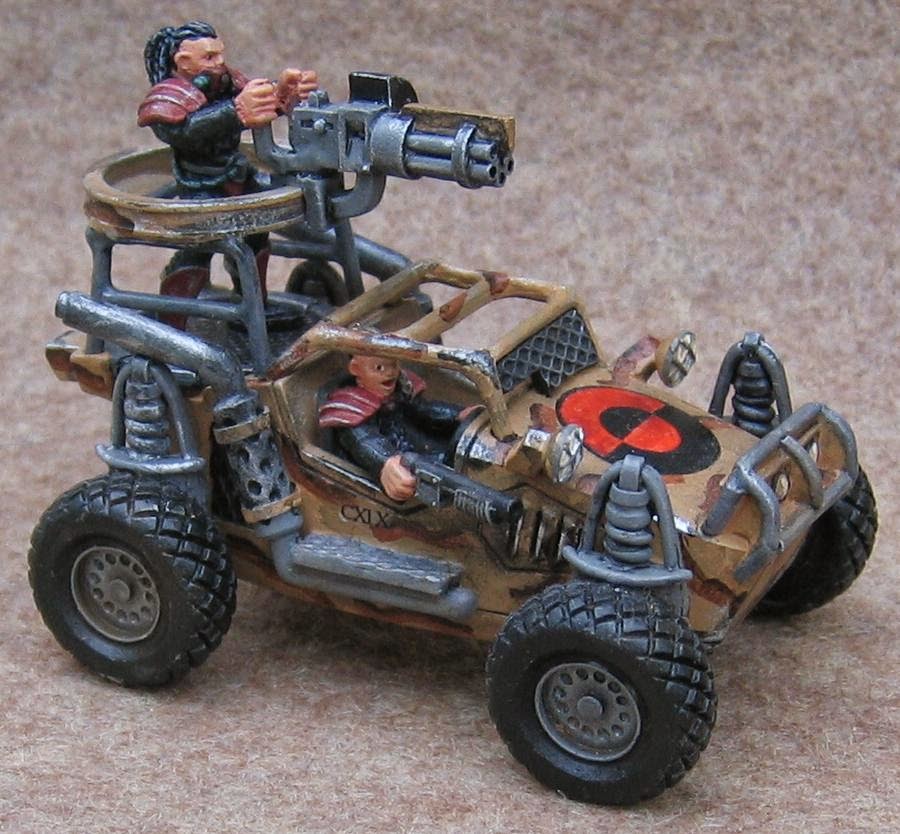 I have 2 of the Junkers dune buggies painted up (and several more unstarted ones in boxes).  This first one is the standard chain-gun model.  It has room for 2 crew in the "cockpit" and in the back it has an open "turret" mounting a very large rotary cannon and another crewman.

Again, the basic vehicle looks very capable, fast and rugged.  The weapon makes it look a bit top-heavy, though.  I wonder if the dune buggy would tip over if the gun is fired in any direction other than straight ahead?

There's also something about this one which makes me particularly annoyed - the driver is firing a weapon!  My own personal experience suggests that it requires a lot of concentration to be in control of a civilian vehicle in peacetime.  By rights, driving cross-country whilst under fire should require one's full attention.  But this guy has 1 hand on the wheel and is using the other to shoot at something off to the side.  I predict that the dune buggy will smash in 5..4..3..2..1..SPLAT! 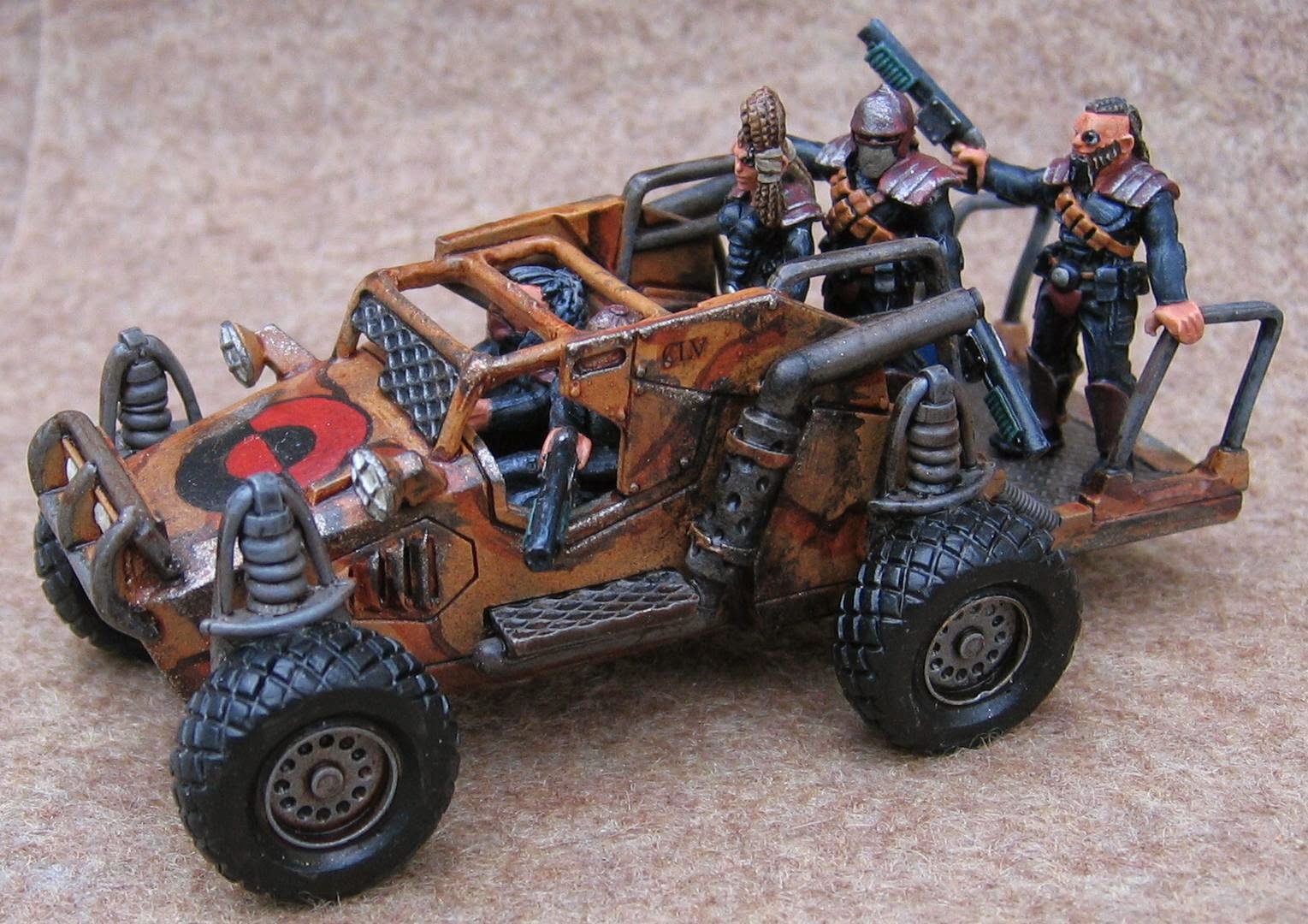 Here's the second form of Junkers dune buggy: a "transport".  Again there is space for 2 in the cockpit.  Thankfully the driver has both hands on his controls, but he has a buddy beside him who is shooting away.  At the back of the vehicle is an open platform with handrails and a further 3 passengers.  The buggy clearly has room for rather more people than this - perhaps 6 or so on the platform - but perhaps such a load would slow it down too much?

There is a third variant of the Junkers dune buggy (with twin flamethrowers?), but I haven't got any of those. 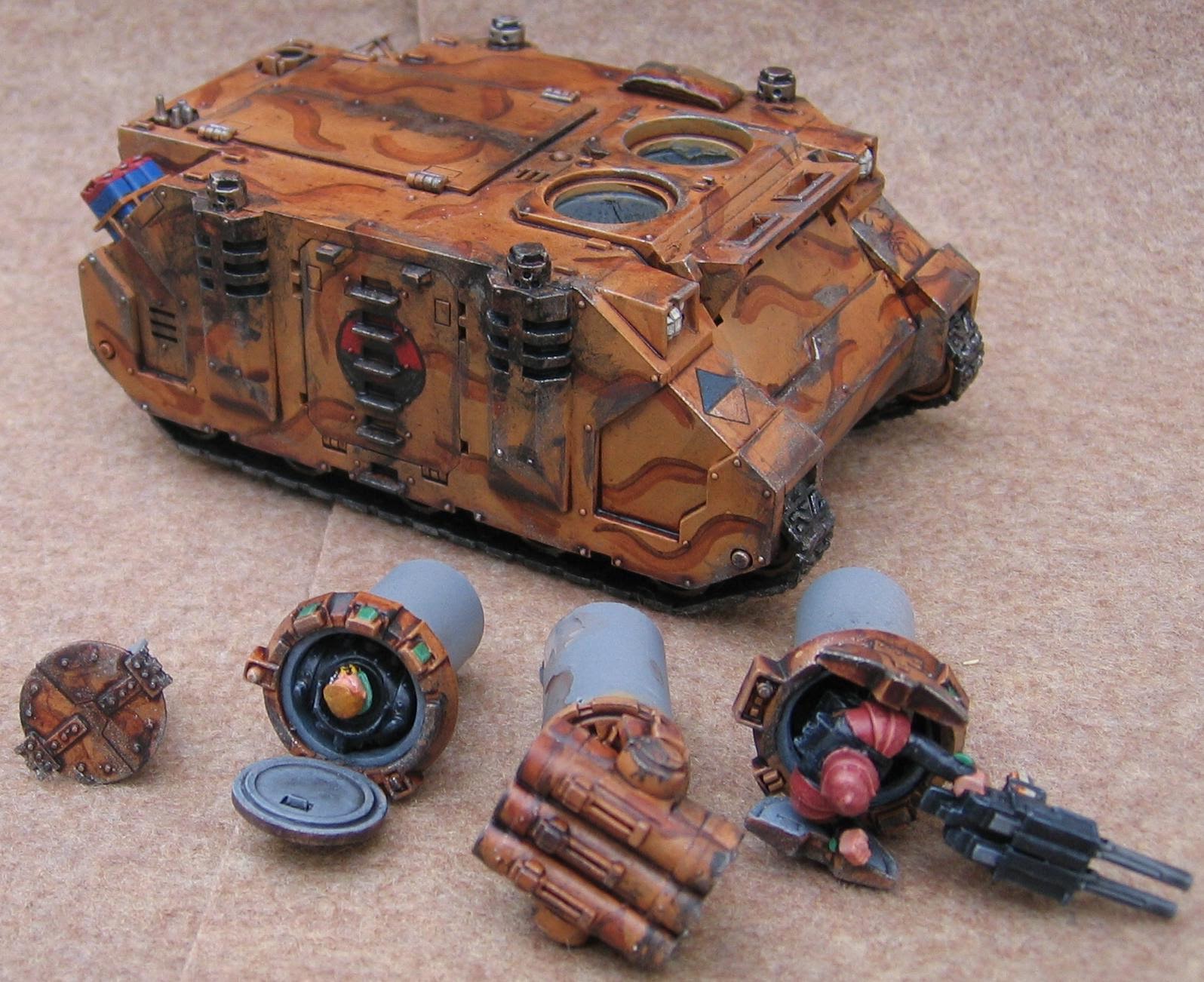 I have one more vehicle for my Junkers force, but this one isn't a bike or buggy.  Rather, it's a full-blown armoured personnel carrier.  It was built from a Games Workshop model that I had lying around after some old project.  It's been painted in the same camouflage as the other vehicles, so it clearly belongs to the same army!

This model came with several weapon options.  Rather than choose one and glue it in, I built all of them.  Each hatch or fitting has been glued to an insert; the 2 openings in the roof of the APC have been lined so that (almost) any combination is possible.  The "plugs" are made from the bodies of 10ml disposable (plastic) syringes, whilst the "sockets" in the APC are made from the slightly larger 20ml syringes. 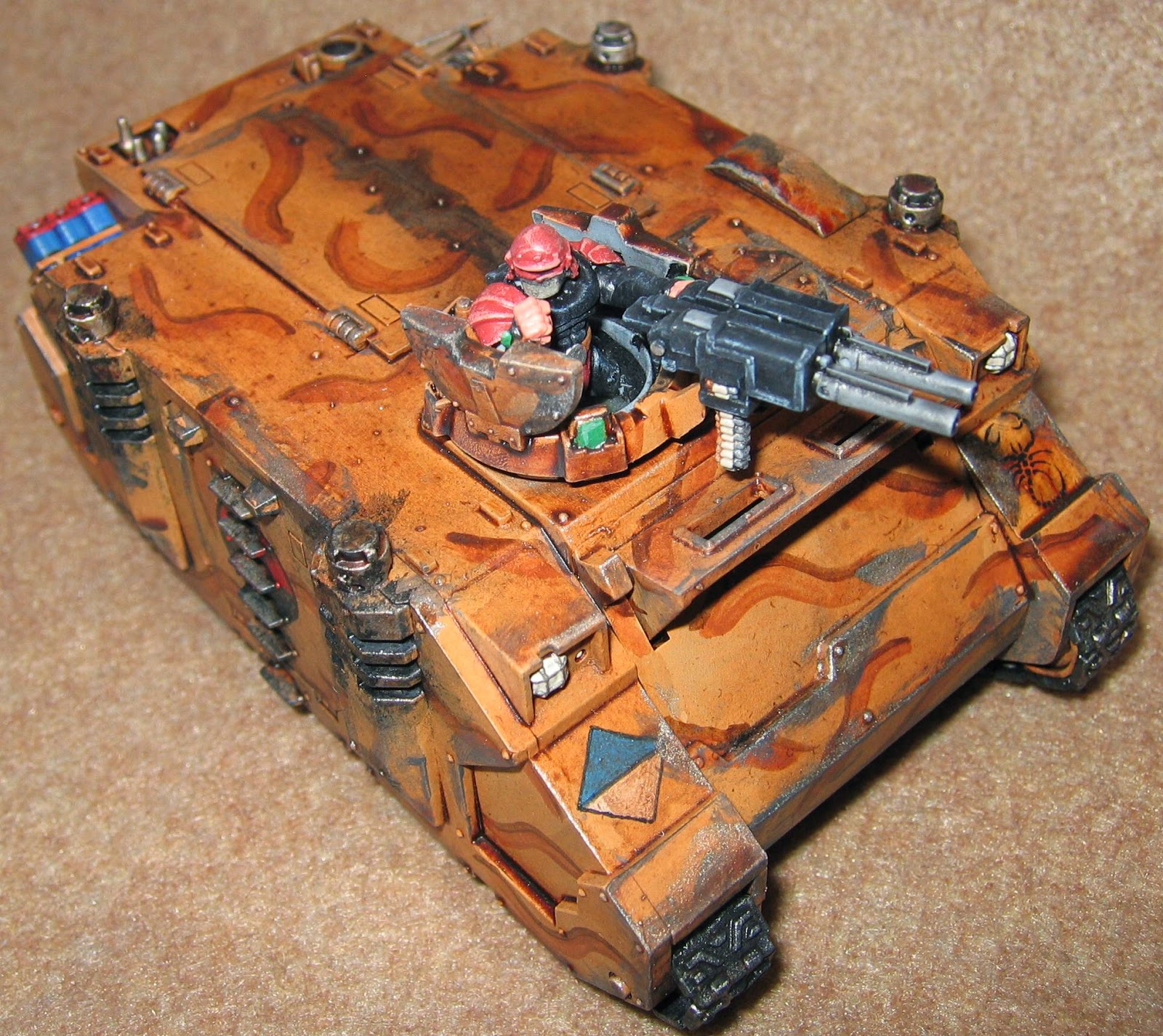 Here's one possible combination, with a twin machine gun and a simple closed hatch. 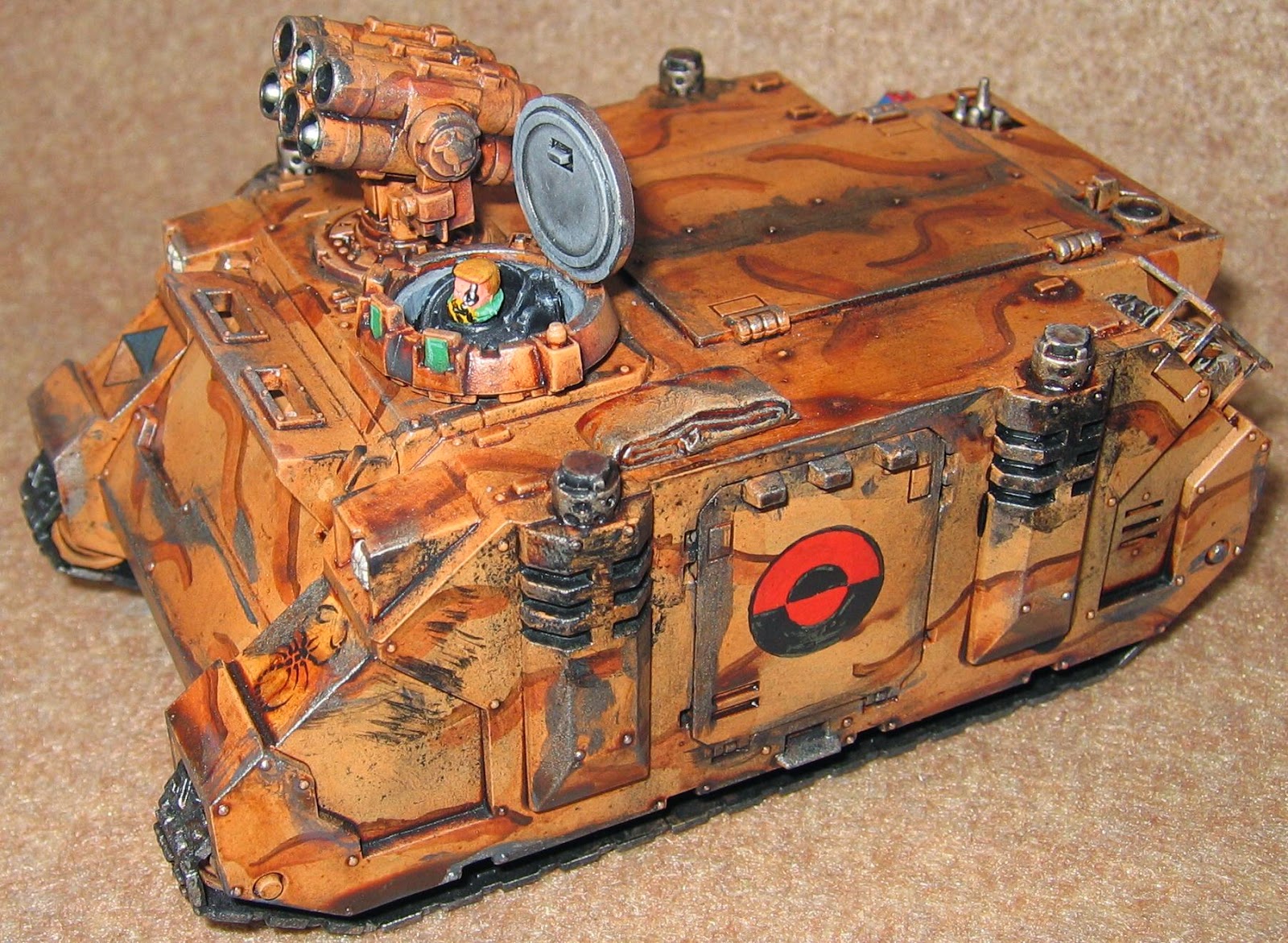 Another variant; this has a missile launcher and an opened commander's hatch.

The dune buggies and quad bikes seem a little out of place as purely military vehicles.  The basic chassis are good models, though and I have several more to build (some time!).  I'm very tempted to convert the crews into post-apocalyptic savages (see this post for the style I'm thinking about) and re-arm the vehicles with quad spearguns and the like.  Road Warrior - here we come!