One of my many gaming interests is Doctor Who, mainly inspired by the free Doctor Who Miniatures Game (DWMG).  As an aside, DWMG is a precursor to Crooked Dice's very popular 7TV and related games, so if you're considering buying 7TV and want a tester first then this is worth a look.

So, within my Doctor Who collection I have a fair number of 28mm U.N.I.T. soldiers (1970s uniforms and weapons, not current) as well as various forces of aliens including Sontarans, Cybermen, Sea Devils and the Family of Blood.  However, I could hardly write my first post on Doctor Who models without showing everyone's favourite adversaries: the Daleks!

These 5 models are metal models from Black Tree Design.  Once upon a time, BTD had a very bad reputation for customer service, but by all accounts that has changed dramatically over the past few years and I've never had any problems when ordering from them.  They still have by far the largest range of wargaming-scale Doctor Who models of any manufacturer, though their models are firmly based in on the 1st to 8th Doctors (i.e. up to the Paul McGann movie of 1996, but not including any of the newer BBC TV series).  By all accounts, BTD haven't had a license to cast new models for many years, but they do seem to have a lot of old stock lying around and most of the range is still available! 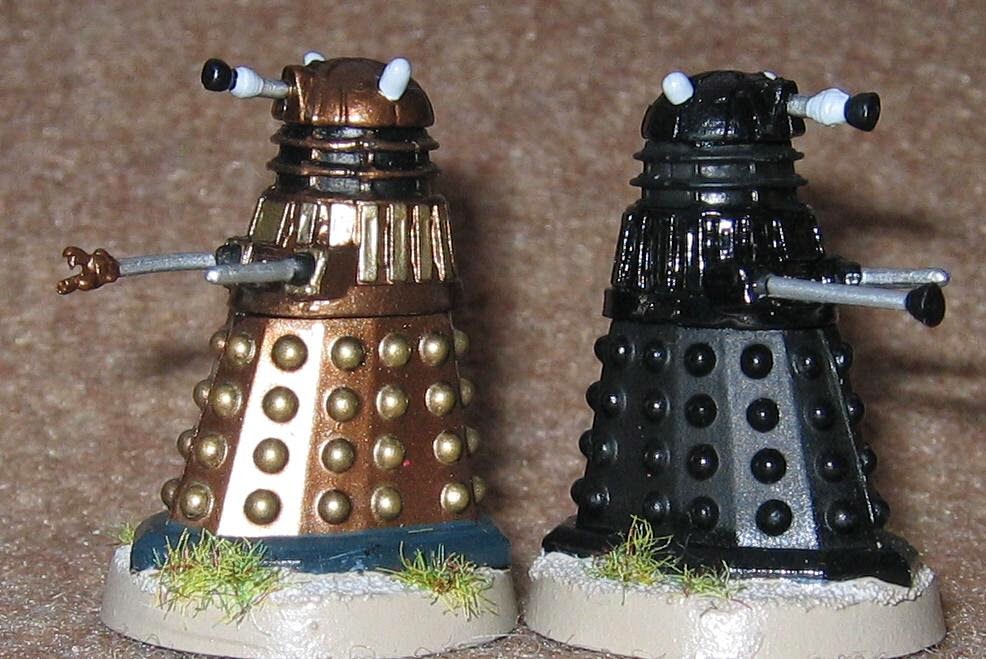 In contrast, here are 2 models from the short-lived Micro Universe series; an engineer and a regular dalek.  These were pre-painted soft plastic models (something like Heroclix), but the range was quite small and some of the models in it were a bit obscure.  Still, they did some nice daleks.

Note that I've rebased these; the models originally came on simple black bases with stats for the (very poor) Micro Universe game printed on the underside.  I collected a lot of the Micro Universe models when they were available, though since they came in semi-random packaging I didn't always get enough of some things I really wanted.

This is a simple comparison shot; it shows that the Micro universe and Black Tree Design models are very close in size.  There are differences in the details, but I'm not at all bothered by those and I'd happily mix these models in the same game.

Also in this shot is my model of Davros, the inventor and sometime leader of the daleks.  He's got to be one of the creepiest Doctor Who villains of all time, I think!

In some of the most recent Doctor Who episodes, a re-styled Dalek model has appeared; they are known as "iDaleks" to fans.  Hard plastic models of these have been available as "free gifts" with some issues of the British children's magazine "Doctor Who Adventures".  They've appeared more than once, so I suppose that the iDalek models might reappear at any time as long as the magazine is still running...

As you can see from the picture, the iDalek is quite a bit larger than the classic model (and remember that unlike the painted model, the iDalek isn't on a base).  This is appropriate for the TV show, as the newer design was easily the height of a man whereas the older version was rather shorter.

This my collection of spare Doctor Who models, just as they came out of the packets.  None of these are based or painted by me, though some of the pre-paints could be used in a game just as they are.  I think that all of these models are either Micro Universe or have come from Doctor Who Adventures magazine, though some of the latter are very crude and are hardly more than blobs of plastic.

Note the iDaleks in the centre-top and classic Daleks bottom left.  I hope I've got enough!

There is another dalek model available in this scale; some of them can (just) be seen in the top, centre-left compartment, in gold-coloured plastic.  These were also hard plastic toys that came with Doctor Who Adventures, but the detail on them was quite soft and the weapon and "plunger" arms were very thick indeed.  However, the size is quite compatible with the other "classic" dalek models.  I'm still debating whether they're worth painting and basing or not.
Posted by Colgar6 at 20:23