After my last post about card vehicles, UrbanWolf and others offered suggestions to address some of the issues that I was having with the models - thanks, guys.  I investigated these ideas and found myself going rather further than I had intended.  The remainder of this post describes all this new activity, at least so far.

Whilst browsing over the WargamesVault site, I discovered that Mega Miniatures had made some paper models.  Even though Mega Miniatures is now all but defunct, these models are still available to purchase, typically for 50 cents (USD) each.  Many of them are a bit too cartoon-like for my taste, but some are very nice. 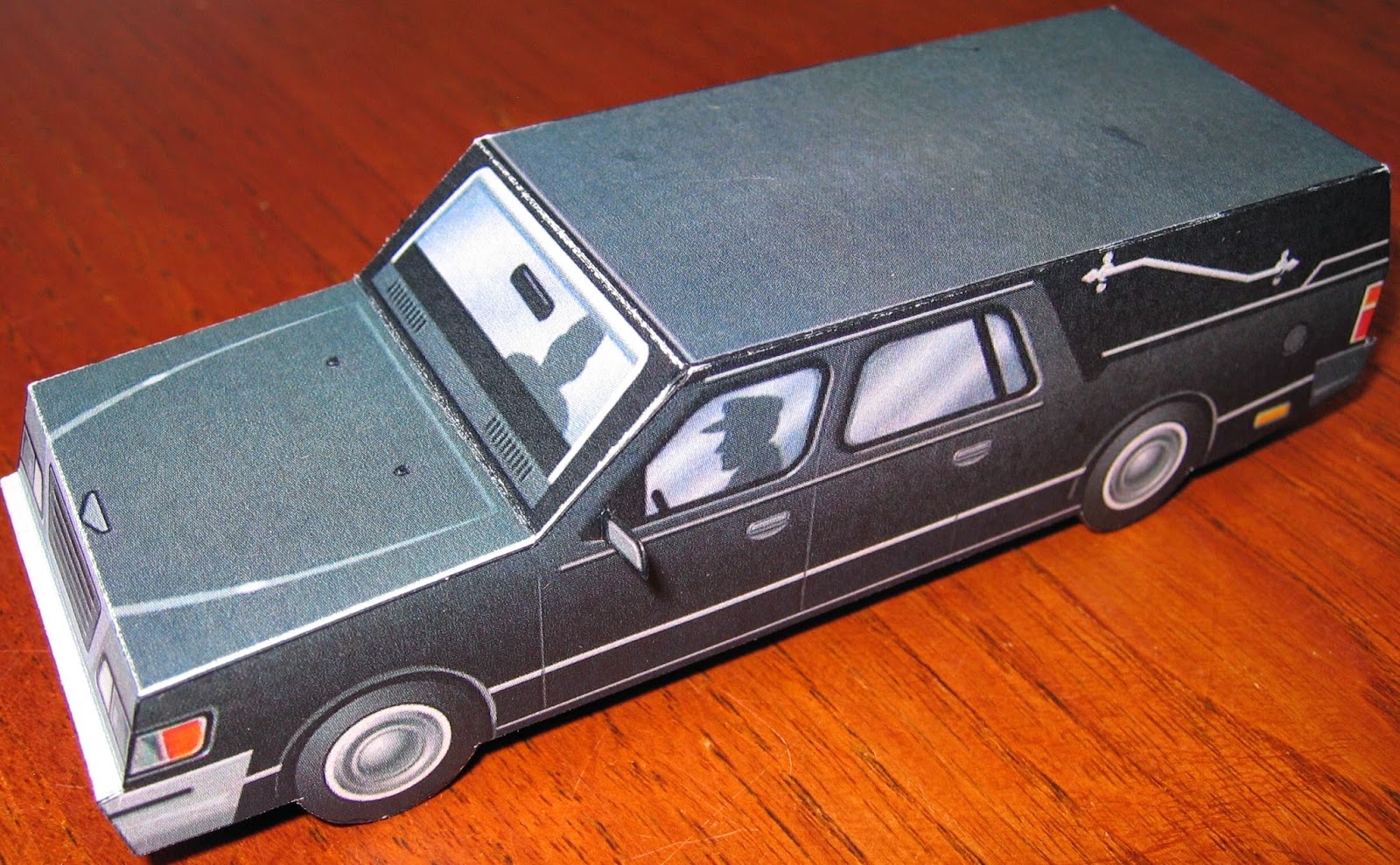 This is the hearse from the "Hearse and Mausoleum" set.  As paper vehicles go, it's pretty basic, but it fits together well and is quick and easy to make. 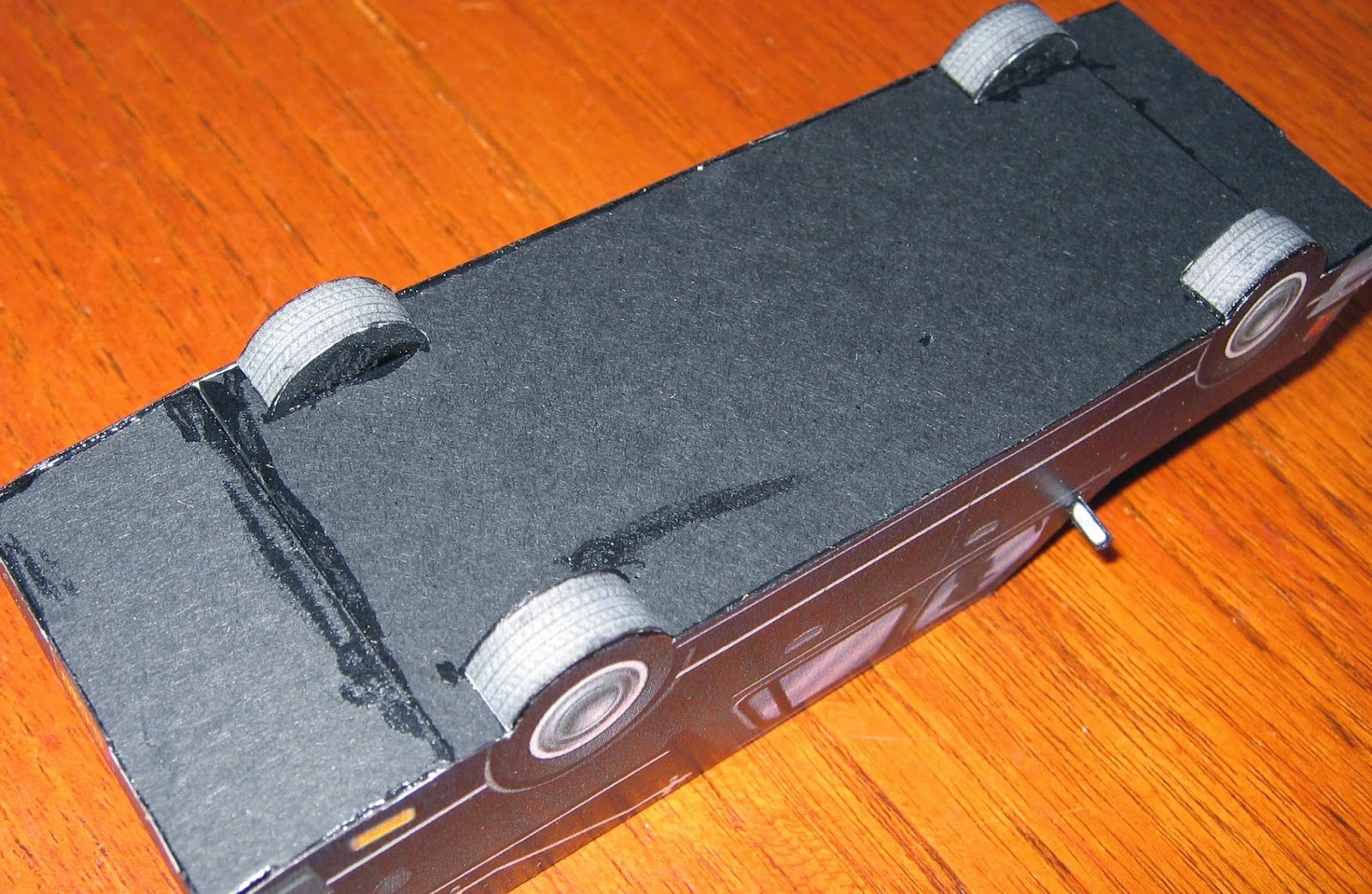 The original kit is really just a hollow shell, so I've filled in the underside with some black mounting board.  As well as stiffening the model, this adds a little substance to an otherwise lightweight model.

I've also built up some wheels using components from other kits; the original just had the outer wheel silhouette and that would have had very little strength on its own.  Mind you, the added wheels alone probably took as much build time as the rest of the model. 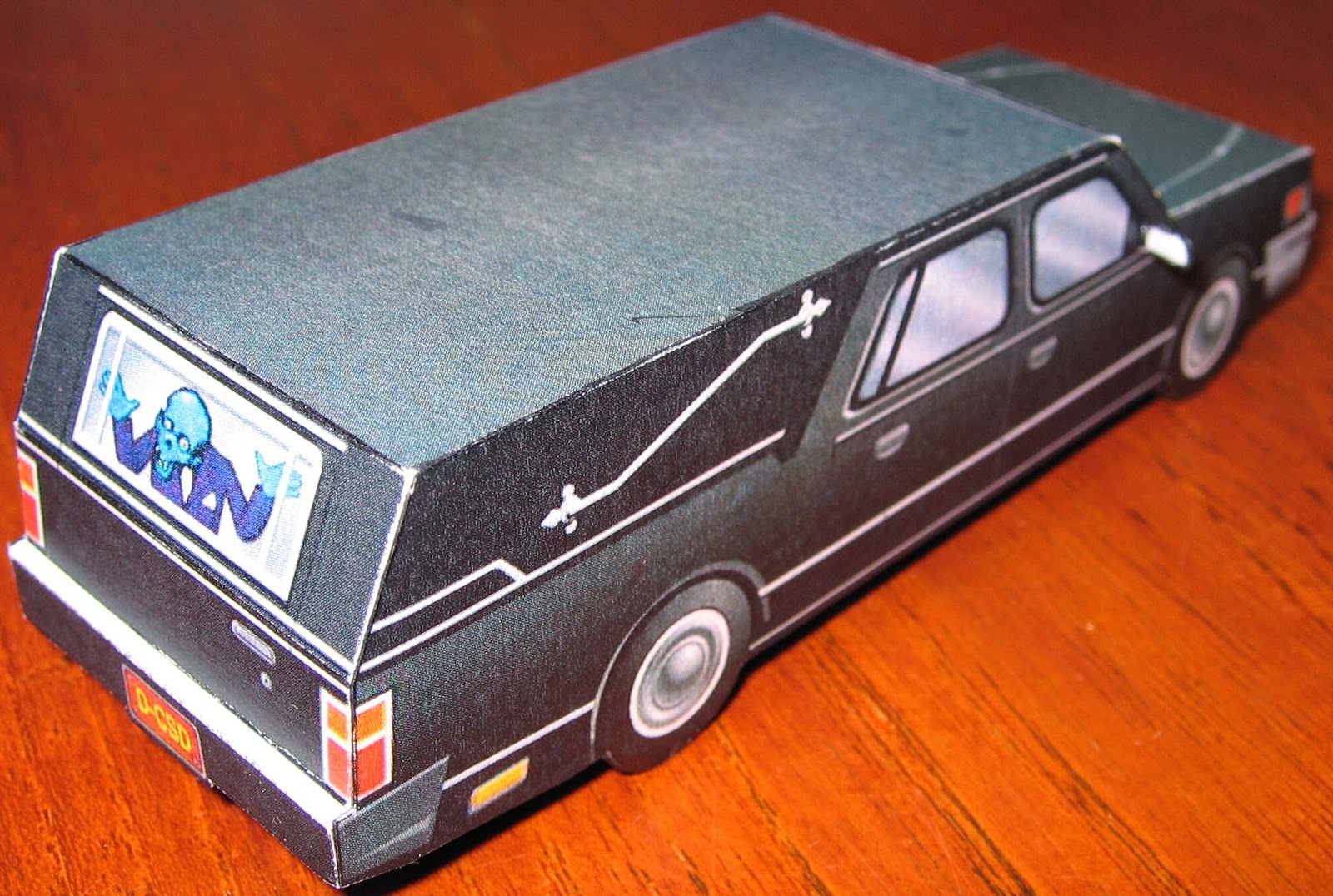 The back window has some sort of "ghoul" peering out; I'm not sure that I like this.  I might eventually build this model again, but edit the source to remove the creature!

Note that this hearse has wing mirrors!  I've never seen another paper vehicle kit that had such a feature; it shows the different emphasis that the kit designer has used: wing mirrors, but no underbody or wheels. That's just an observation on my part and shouldn't be taken as a criticism, mind you. 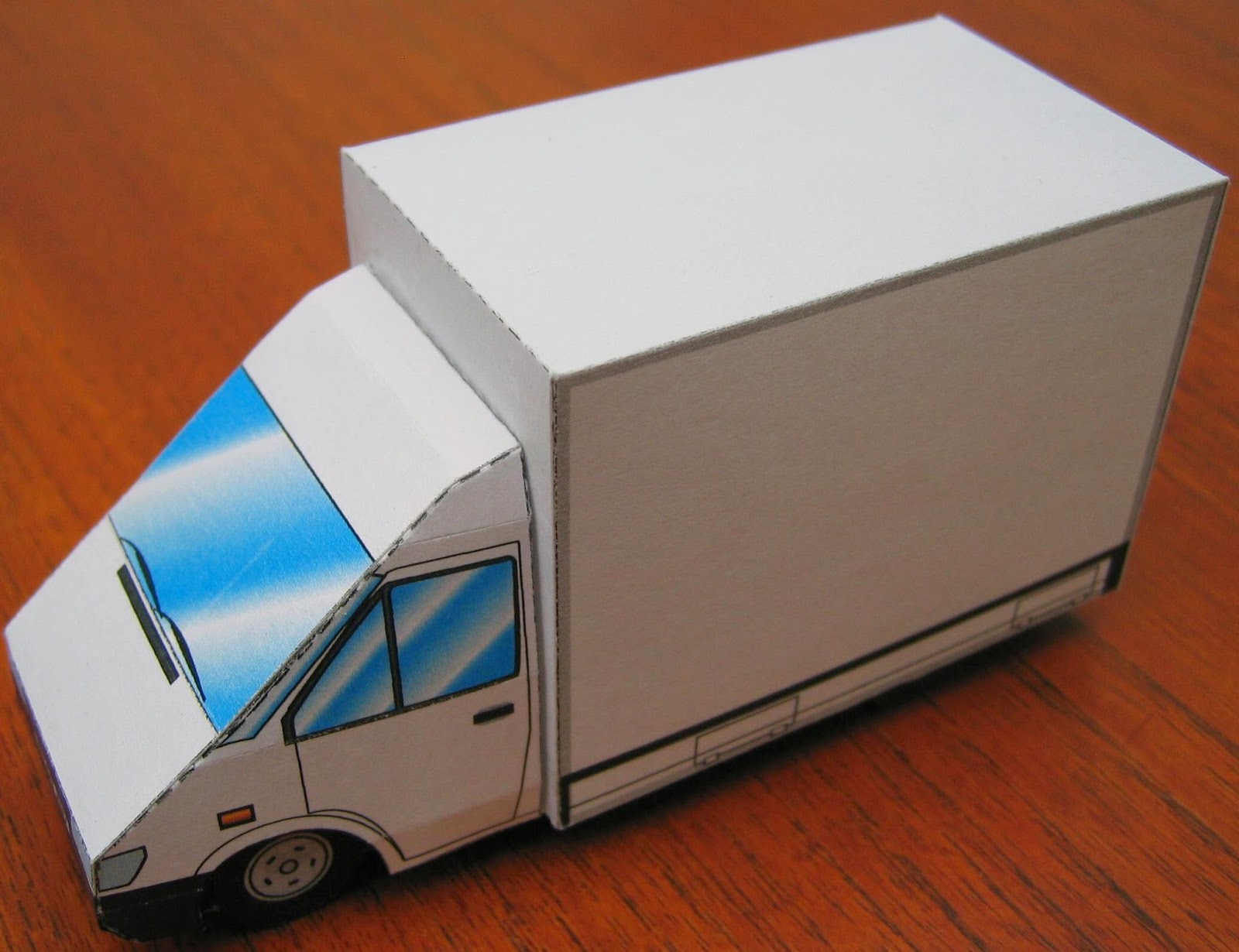 Here's a model from another publisher of paper vehicles who is probably better known for their metal miniature range.  This time it's a white van from Warm Acre's catchy-named "Vehicles for Modern 28mm Wargaming" set.  As well as this box van, the set also includes another type of white van and red and blue versions of a small car. 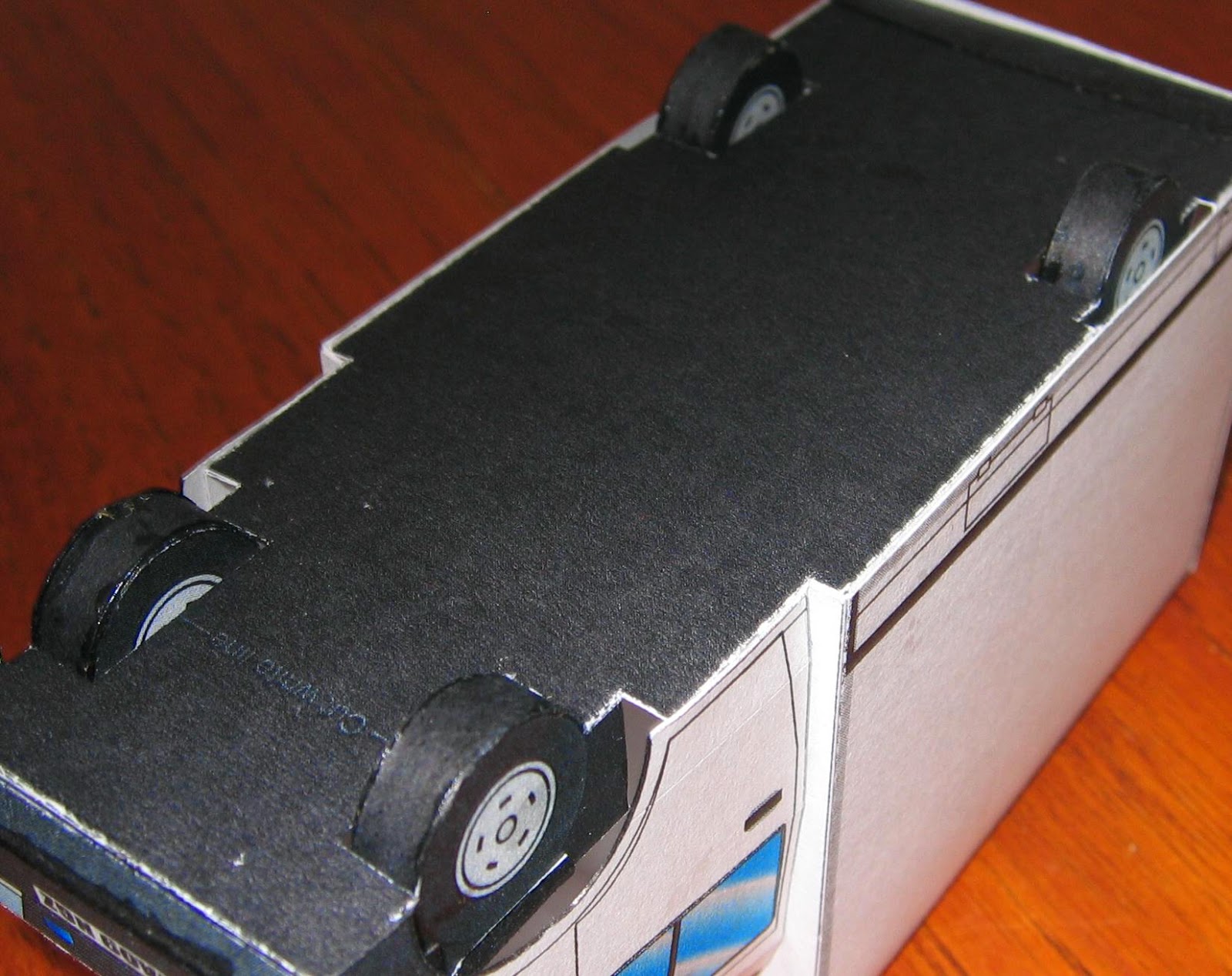 This time, the designer has gone for a complex body shape on the cab, with curves in 3 dimensions (most paper vehicles have slab sides/flat faces, for simplicity).  The truck also has a complex way of positioning the wheels; again I felt it necessary to build these up considerably with components from other kits.  Between the cab and the wheels, this has to be one of the most complex paper/card kits that I have undertaken in a long while, so I wouldn't recommend it for beginners.

You might expect that the more realistic shape of the cab and wheel positioning would lead to a much better end result.  In this case, I think that the publisher has pretty much ignored any attempt at texturing the surfaces, so the vehicle shows no signs of rust, splashes of dirt, reflections or anything like that.  Additionally, the dashed fold marks are very obvious; these could have been disguised better.   In my view this lack of detail drags the Warm Acre models down a long way, especially compared with texturing experts such as WorldWorks Games.

Note that Warm Acre also make a British police car, police van and ambulance, as well as a number of buildings.  These are subjects that are difficult to find elsewhere, so if you want them as paper models then this may be the way to go.

For a long time, I've regretted not buying the Mayhem Industrial set from WorldWorks Games whilst it was still in their catalogue.  However, after my last post I was informed that it was still available from paizo.com .  Although it was rather more expensive than the other kits described above, I wanted some big rigs for my games and this was the best way to get them, I thought. 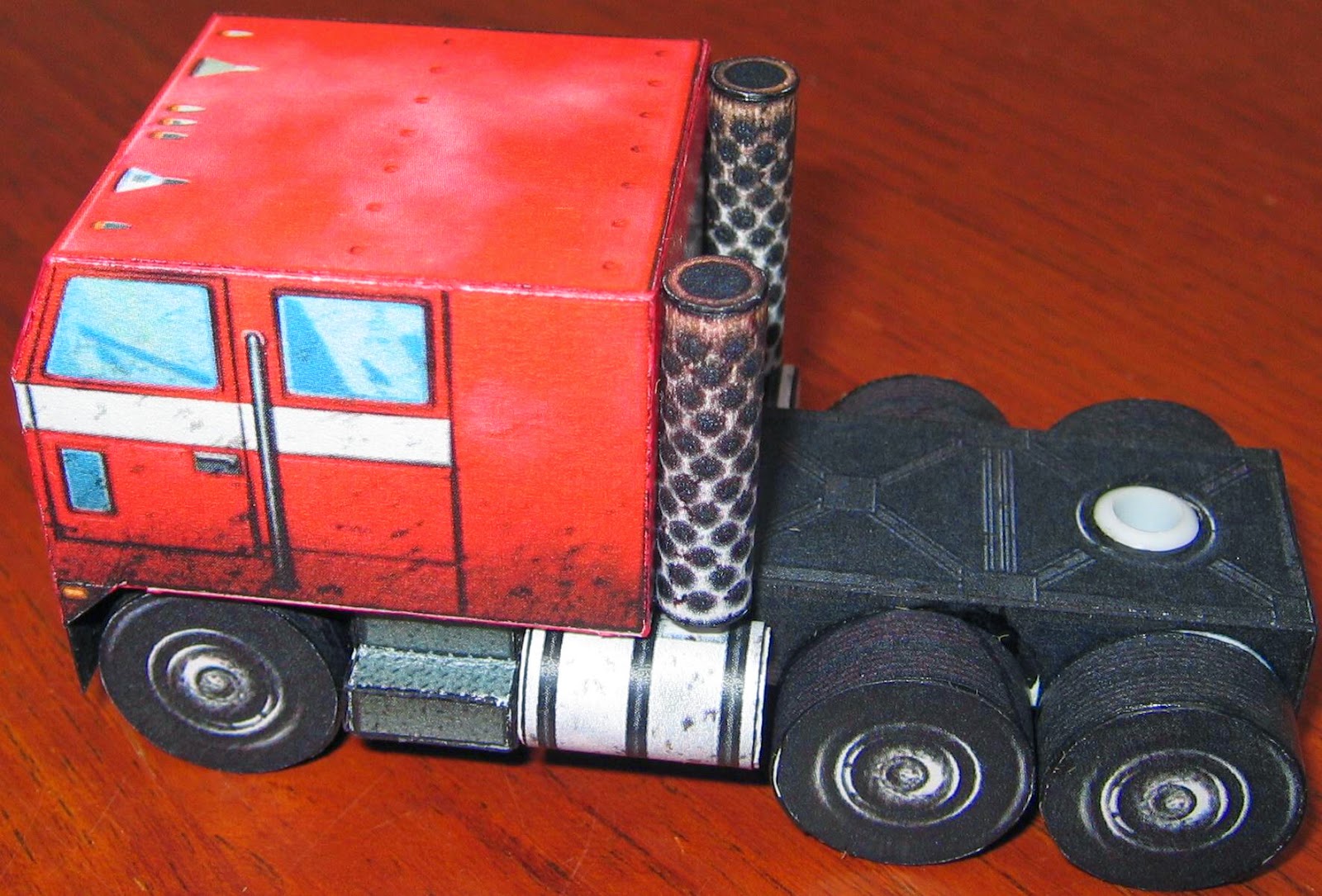 With my newly-purchased download, I set to work.  So far I've completed a single tractor unit: the red "cab over".  Note that most of the shapes in this model are simple cuboids or cylinders; from that point of view its an easy kit to build.  Of course, the truck is composed from quite a lot of different such pieces, so it may be straightforward but it takes longer than some other paper kits! 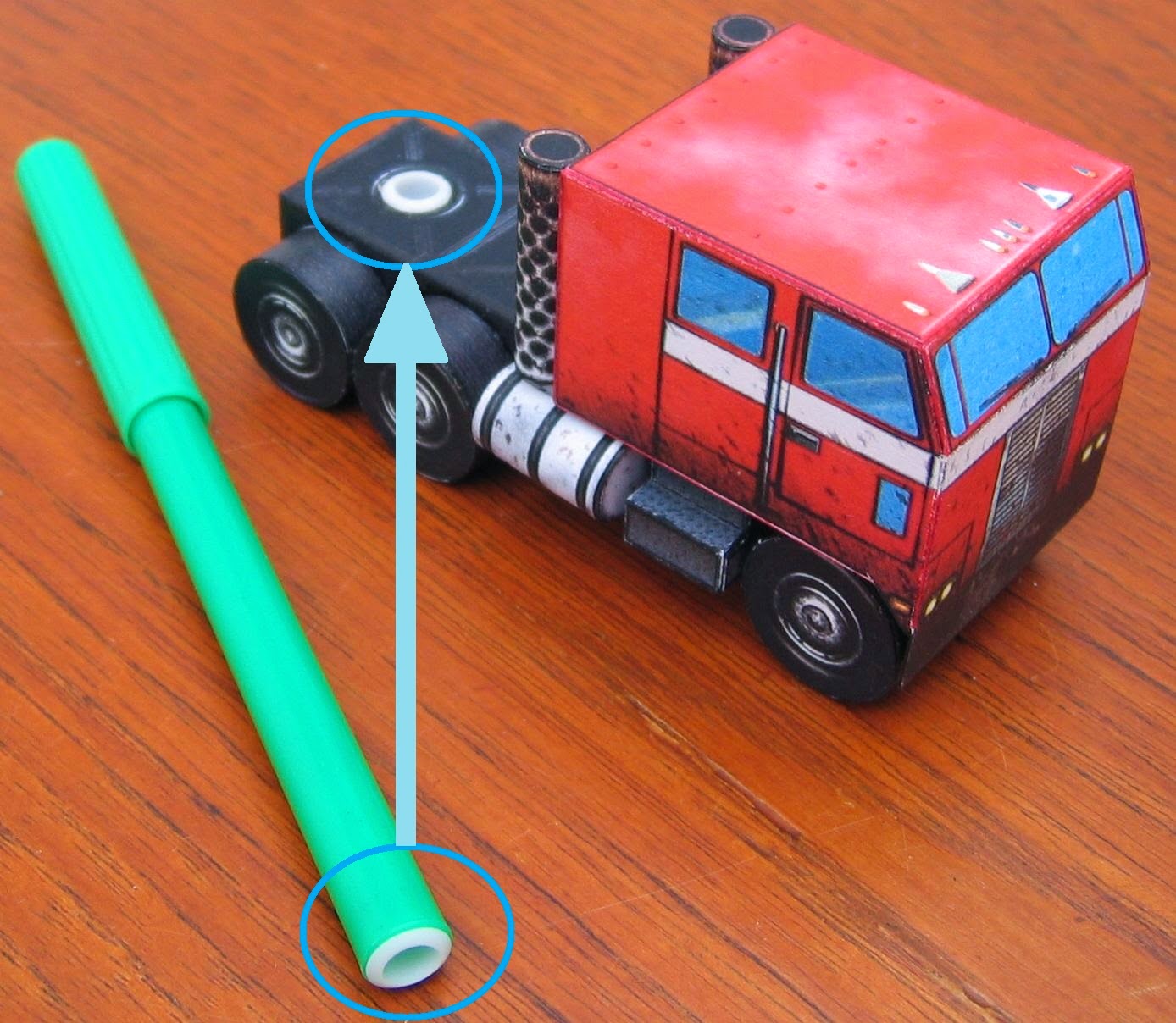 The truck models from Mayhem Industrial don't have a coupling between the tractor and trailer.  I suppose that the model-maker is expected to either glue them together or to just rest one piece on the other.  That wasn't good enough for me, so I've built a socket into the back of the tractor - the insert I used came from the end of a cheap felt-tip pen that had recently expired.  When I finish a trailer unit, I'll add a spigot in the right location on the underside (probably made from a Hama bead, as we have thousands of those around the house and my kids aren't likely to miss a few).  The trailer will then just plug loosely into the tractor and allow the 2 parts to be positioned at any angle whilst not falling apart easily. 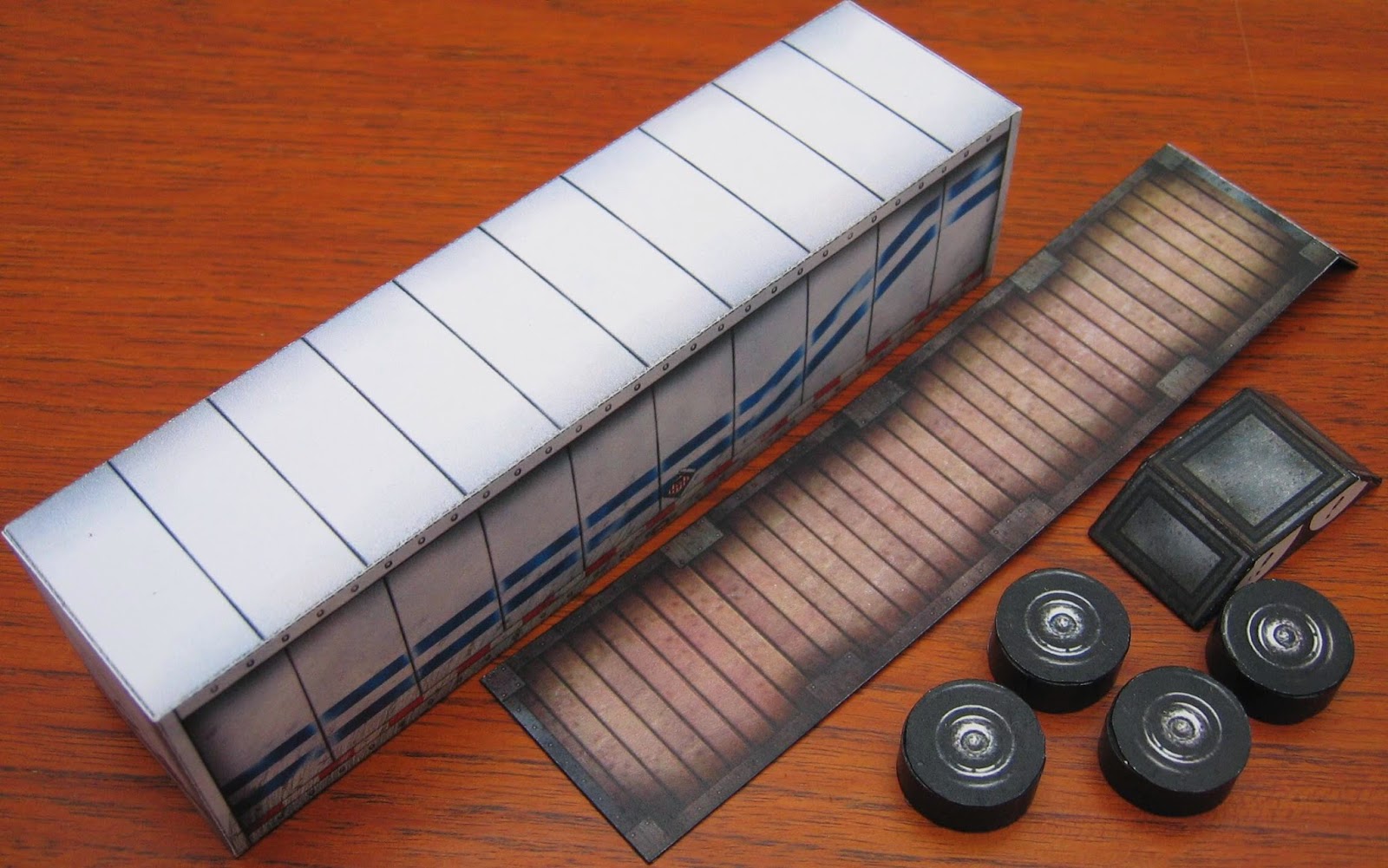 As you can see, I haven't got as far with my first trailer.  Most of the sub-assemblies have been completed, but there is still a little way to go before this container body is finished.

I plan to make at least one more tractor (probably a "long nose") and several trailers.  In particular, I'd like a flatbed trailer and a tanker, though the latter will require some kitbashing as this WorldWorks kit doesn't include such an option. 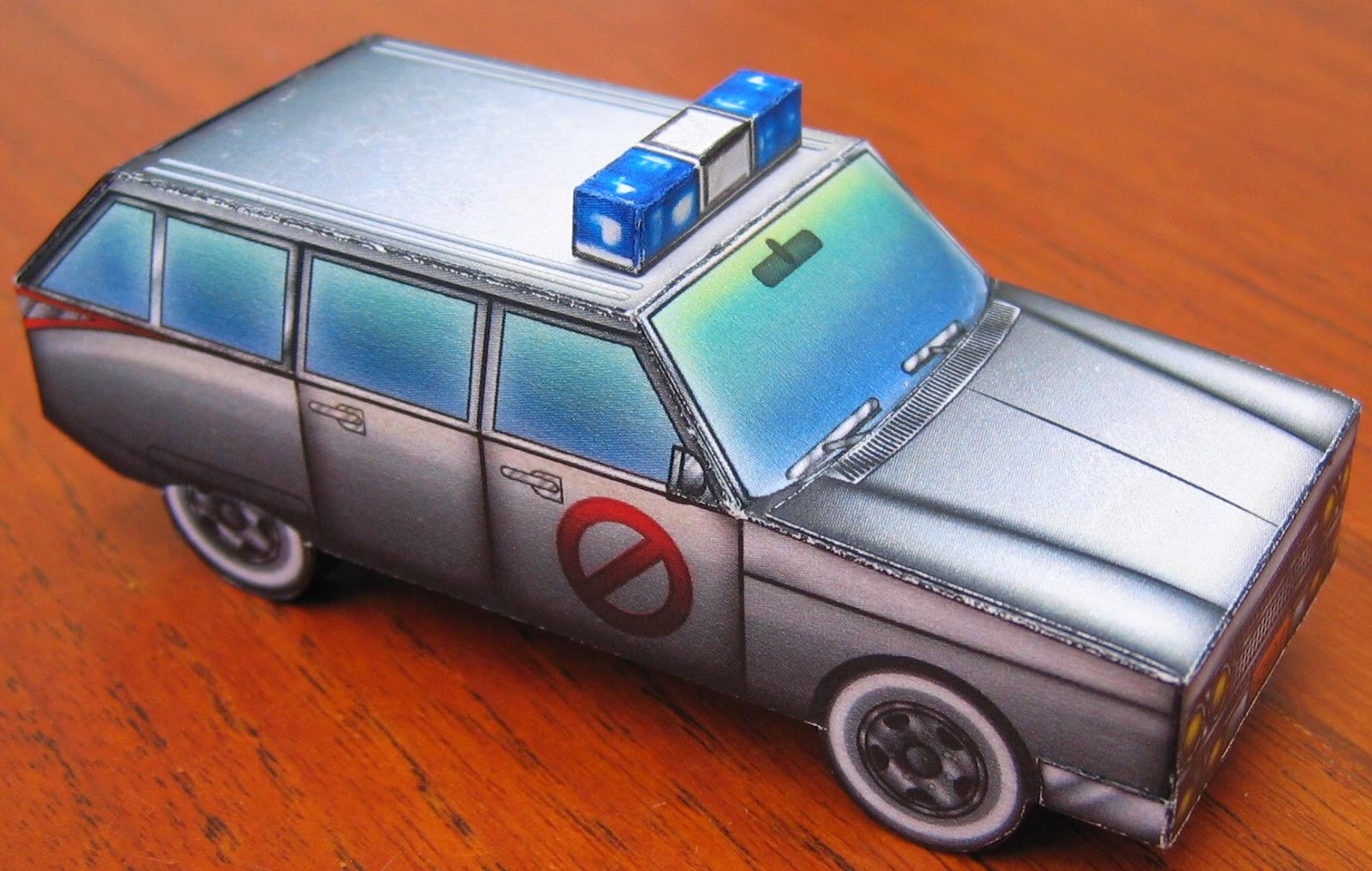 One of the things that I mentioned in my last post was a desire to add a light bar to Stoelzel's Structures "Echo 1", to see if the vehicle might resemble more closely that used by the Ghostbusters in the film of that name.  I've taken the police car light bar from Mayhem Police and used GIMP to change it from red-white-blue to blue-white-blue.  Note that for now, the light bar is just placed roughly in the right position - it's not glued on yet.  This is really because I want to know what my readers think: does it improve the vehicle?  The original "Ecto 1" had a whole lot of other clutter on the roof as well, but I don't feel up to emulating that.  What do you think?