The weather was beautiful last weekend, quite unusually warm and clear for the time of year.  On a whim, I decided to take my 2 younger children on a visit to nearby Dumbarton Castle in the afternoon.  After all, I'm already a paid up member of Historic Scotland (who own the castle), so we get free entry!

Dumbarton Rock is a volcanic plug that sits where the river Leven flows into the much larger river Clyde.  Although the site has been used for many centuries, most of the current configuration is a Napoleonic coastal defence fortress, built to protect the city of Glasgow some 10 miles further up the Clyde.

The rock itself consists of 2 peaks with a narrow gulley between them.  At some points, the cliffs around the perimeter are very steep, so that walls are only present around the north and south edges of the castle.  I guess that there was never a realistic chance of anyone attacking by scaling the east or west faces!

This site has at least many hundreds, if not thousands of years of history.  I'm not going to even try to list them all, but here are a few highlights: 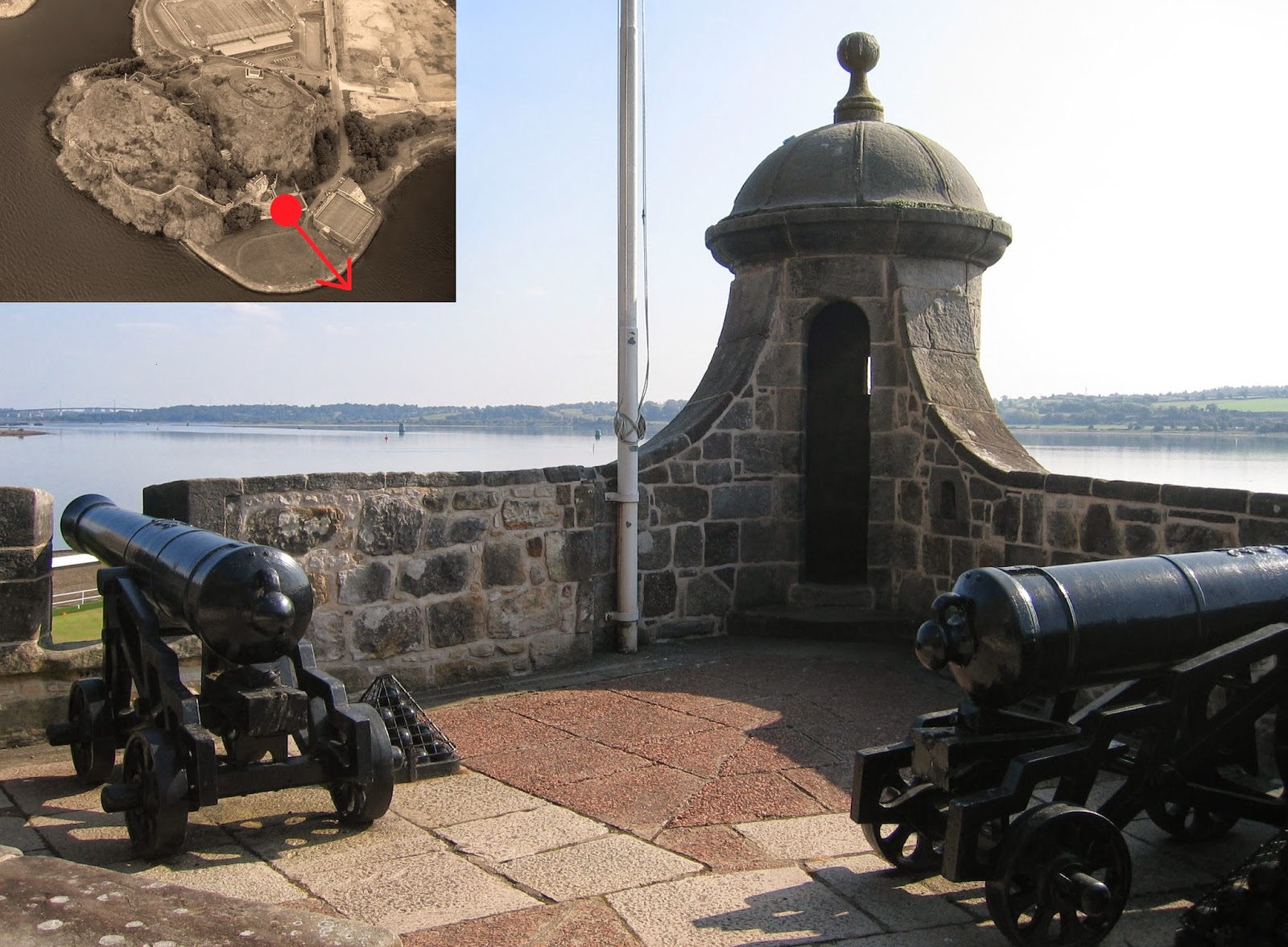 Starting near the entrance, just below the Governor's house, is the King George battery of 12pdr cannon.  This is one of the larger batteries in the fortress; it protects the most easily accessible part of the rock and consists of maybe 4 or 5 guns (most of the batteries have their cannon still in place, but a few are missing).

How do I know that these are 12pdr guns?  Well, there are various marks on the cast iron, either on the carriages or on the gun barrels themselves.  I've always been fascinated by the amount of information present, though I suspect that most visitors aren't even aware of it. 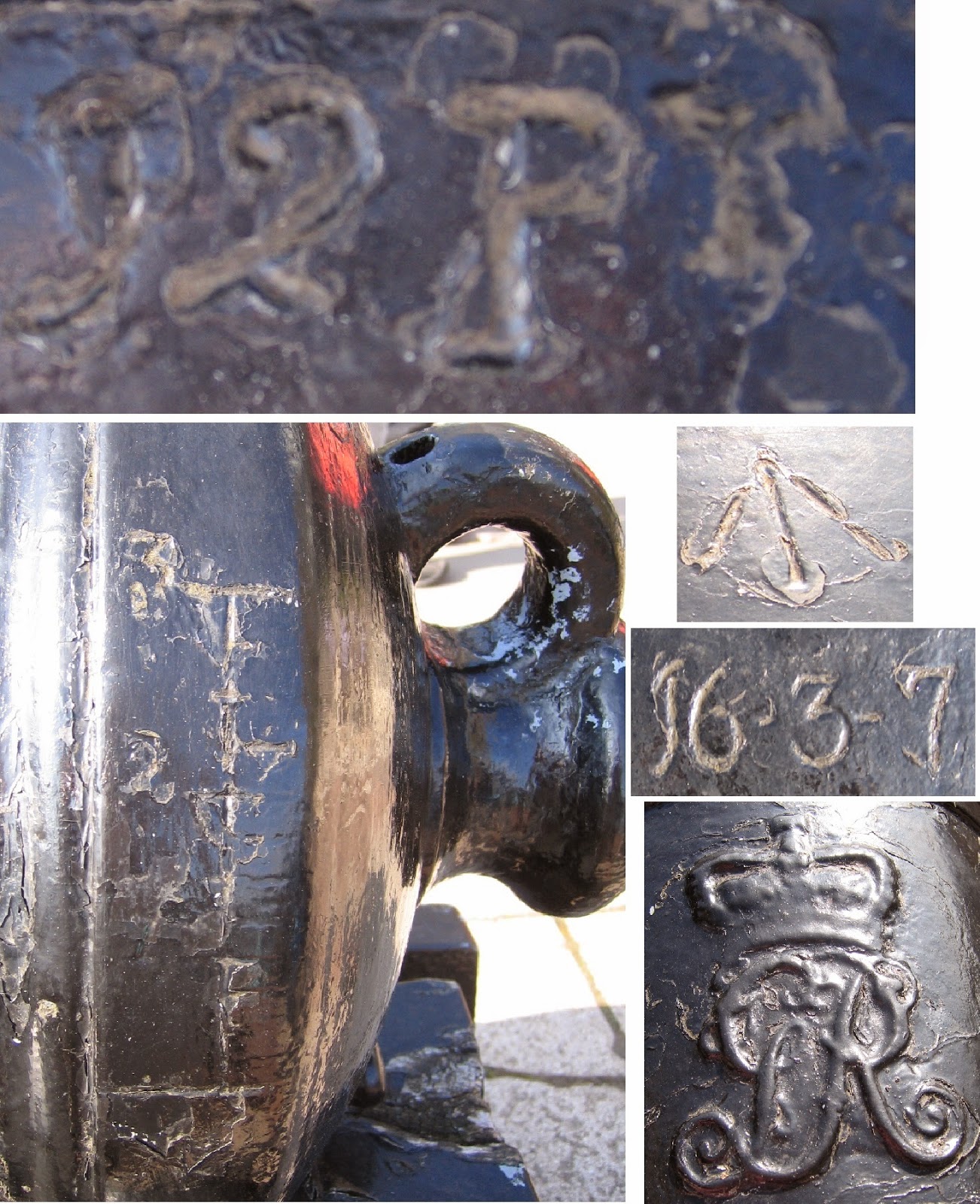 From the top, clockwise: 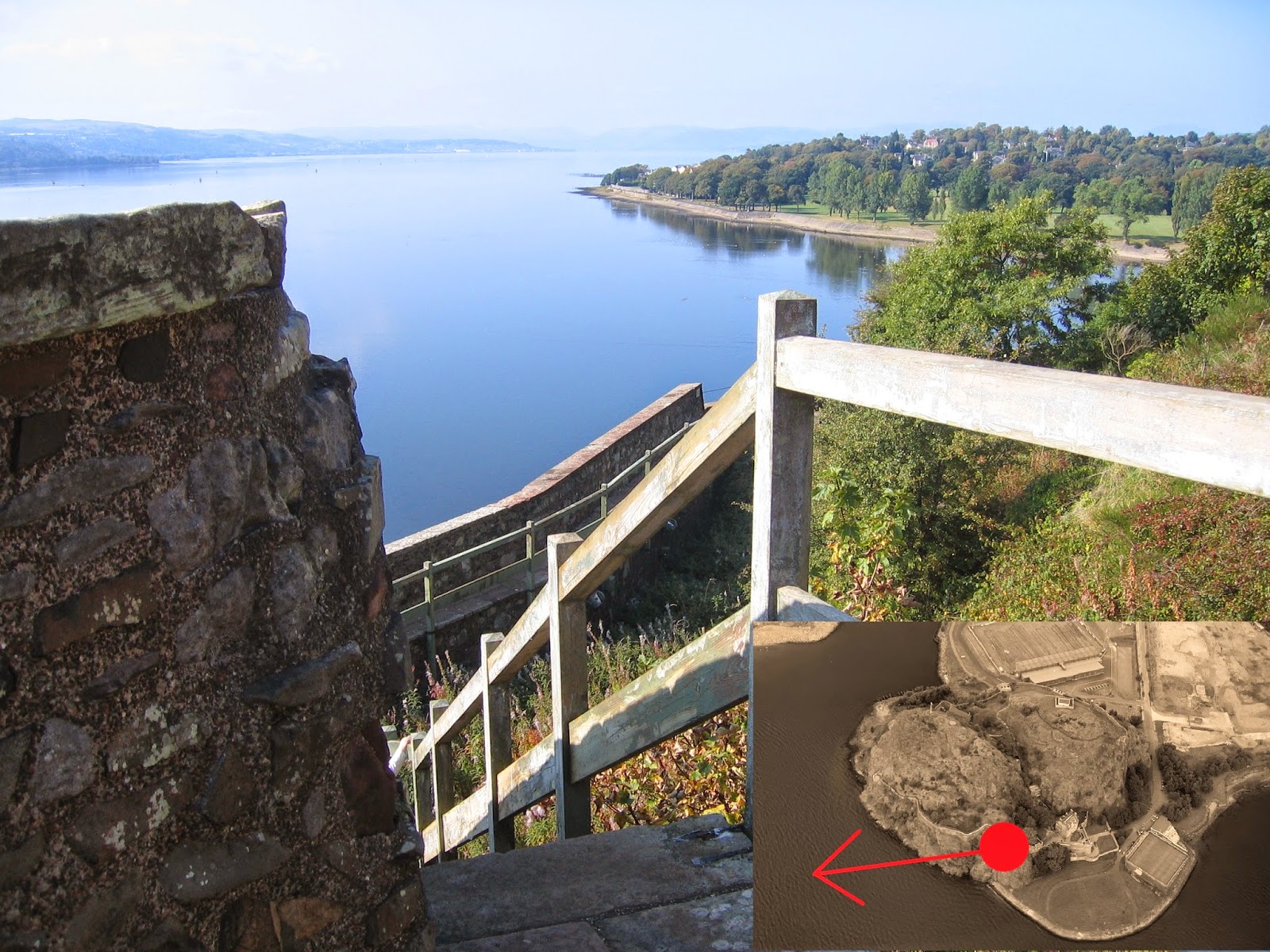 Around the south wall. the path goes up and down a lot as it hugs the steep side of the rock.  There are 2 or 3 small batteries, each of 1 or 2 cannon, wherever there is a slightly wider point. 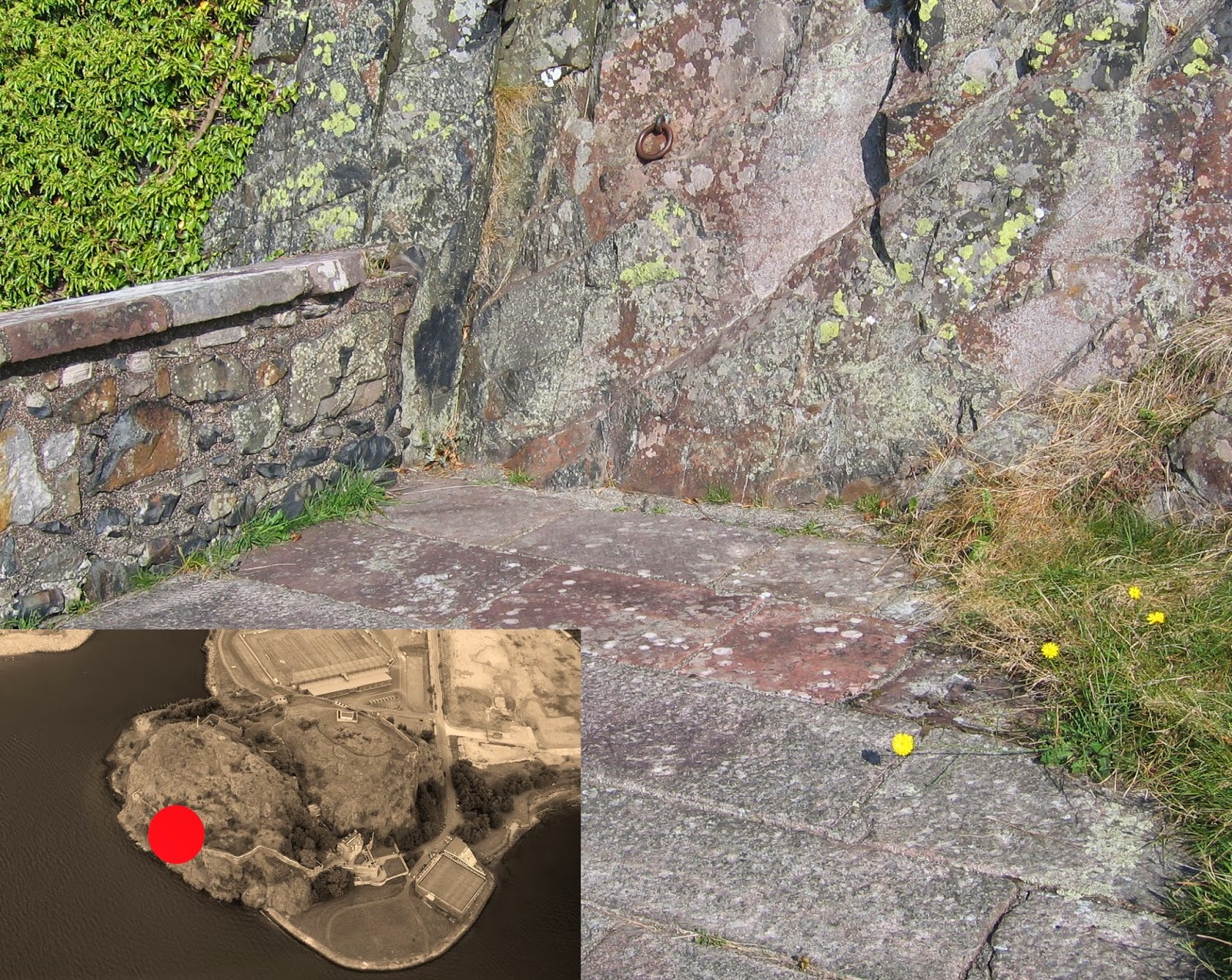 At the far end (the Spanish Battery), there is no cannon.  All that's left are the flagstones on which it would have sat and an iron ring in the side of the cliff. 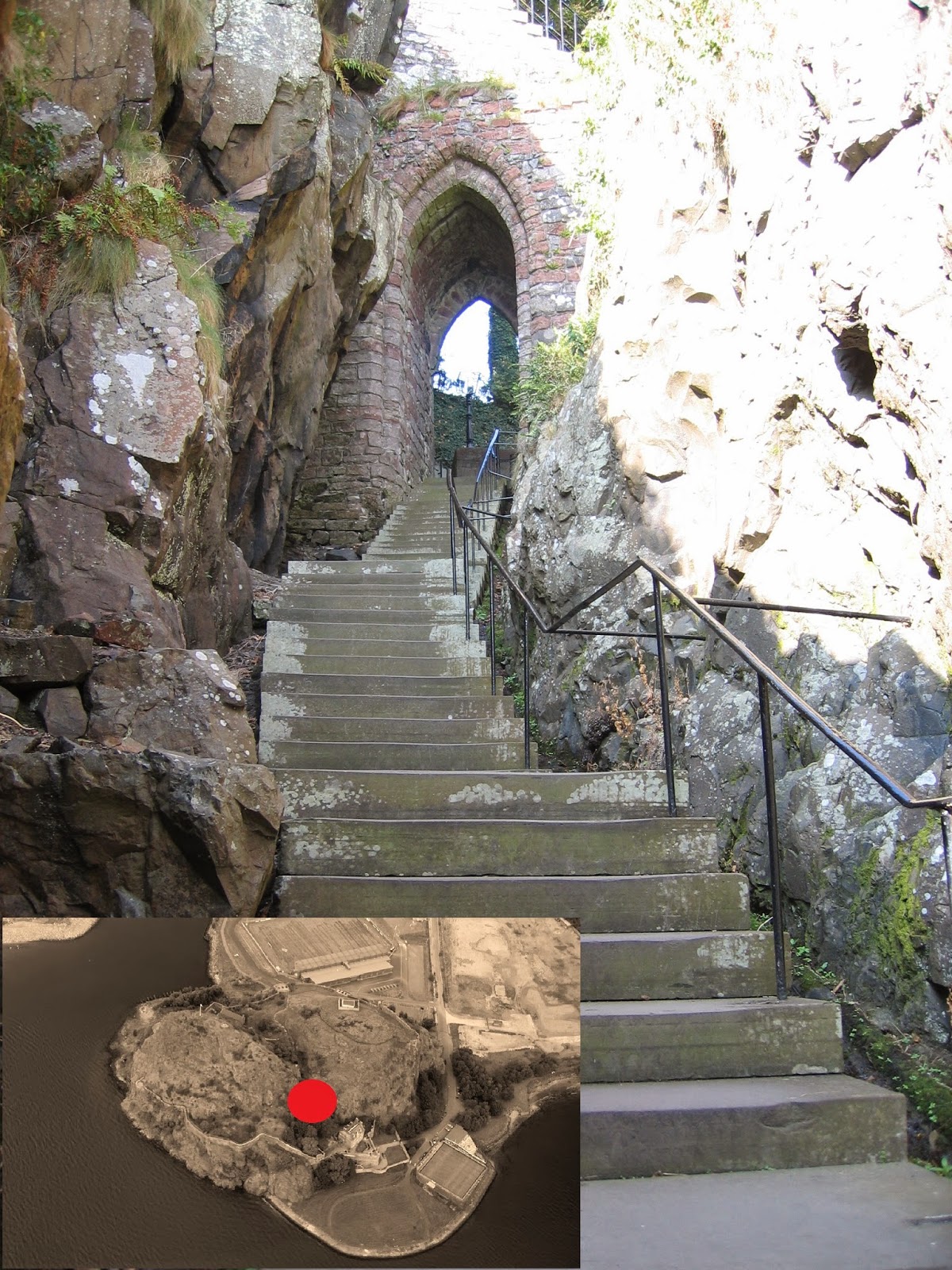 To get into the main part of the castle, it is necessary to climb the gulley that runs between the 2 peaks of the rock.  Even though the modern stairs are well constructed, it is easy to see how hard it would be to assault this position.  There are 2 guardhouses on the route and one of them has a portcullis as well!

At the top of the cleft there is a flatter piece of land.  This is large enough to have some buildings on it, including the foundations of the late medieval gatehouse which gave entrance to the castle from the north-west.  There is a small flight of stairs down to the well, but the area is dominated by the French Prison.  Sadly, it's not possible to see inside this building; it's undergoing restoration work and may be opened to the public when this is completed.  I can't help wondering just how many people were held in here...

Moving up the smaller, flatter mound to the east, we come to the Duke of Argyll's Battery of 3 x 18pdr cannon.  These are the heaviest guns in the fort, but they're pointing up the river Leven towards Loch Lomond and the Highlands.  It seems to me that they wouldn't have been much use against an invading foreign fleet - though any land army coming from the north would have been easy targets.  Perhaps the battery was placed here simply because they could? 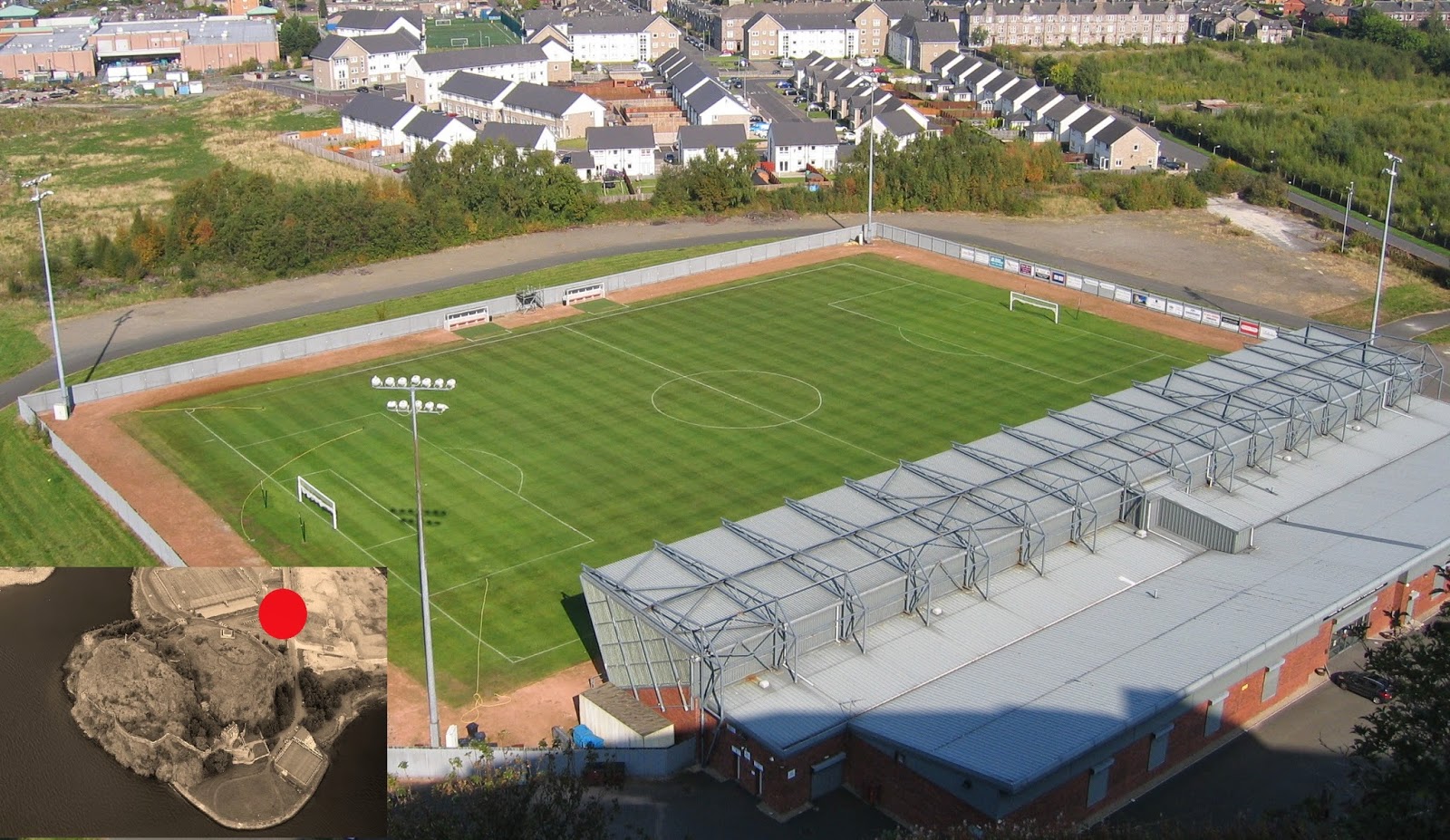 Slightly further around there is a good view of the stadium for Dumbarton Football Club.  Apparently, the castle is closed to visitors on the days of big matches!  It does show just how flat and open the land to the north is, at least for a mile or two.

The Prince Regent's Battery is next.  This also faces landwards, but has slightly lighter guns (1 x 12pdr and 2 x 6pdr).  Once again, the field of fire is excellent and it's hard to imagine how a successful attack could be mounted from this direction. 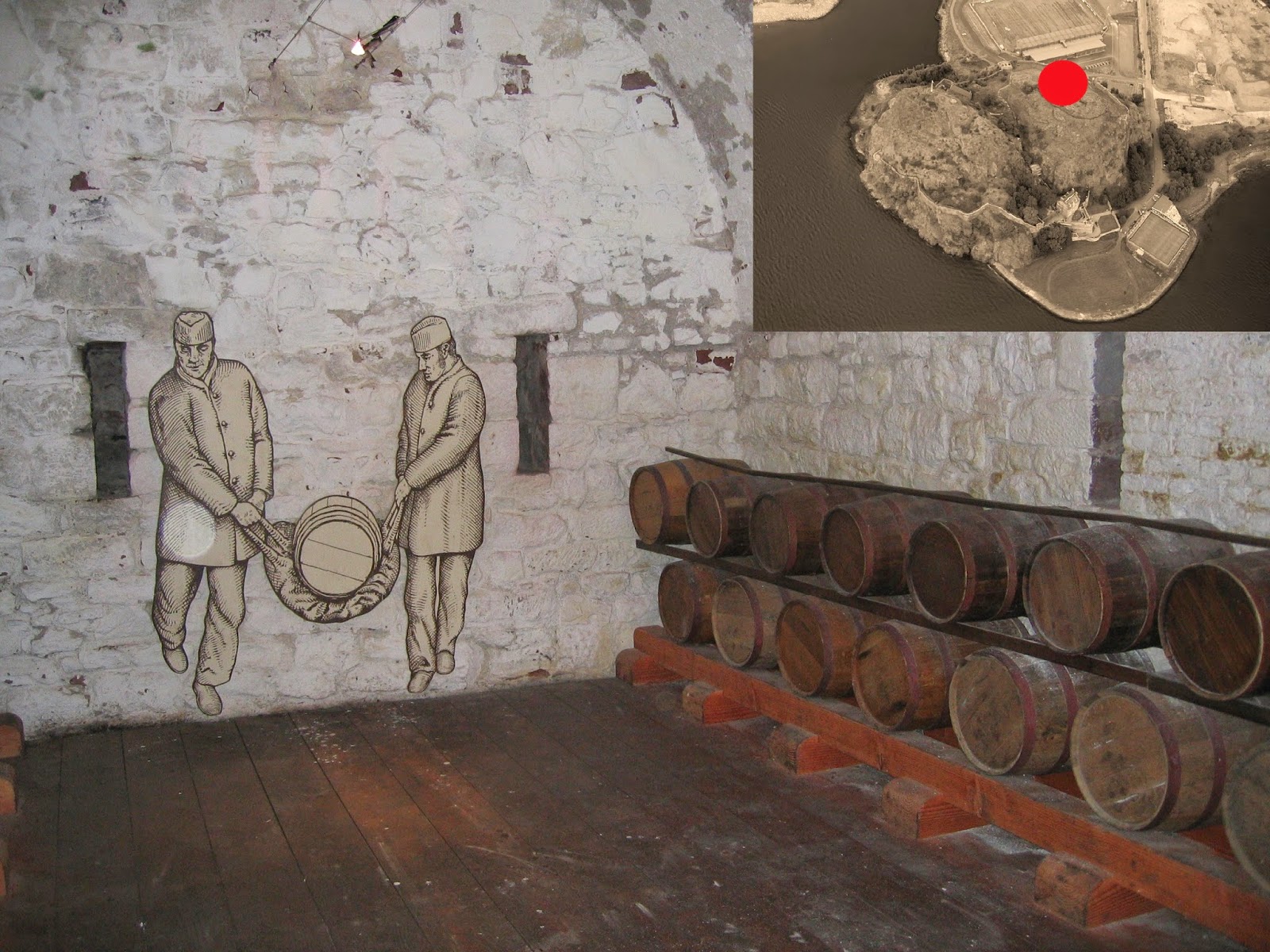 Perched on top of the lesser hill is the Magazine.  I had great arguments with my 9-year old daughter, who insisted (still does) that a magazine was a kind of comic book.  She just wouldn't accept that it's also the name for a place where ammunition is stored.
Many of the design features of this type of magazine are explained on boards nearby; all are designed to keep the gunpowder dry but to prevent an explosion - or at least to limit the damage if the worst should happen.  The most obvious such measure are the double walls around the building itself; if the magazine blows up then the explosion will go upwards instead of outwards!

There is little provision for muskets in Dumbarton castle, but to the north east one wall has a number of firing ports.  It seems to me that the range would be fairly extreme for a smooth bore musket, even to the closest point outside the fortress.  I must be missing something here; I imagine that the builders of the fortifications knew what they were doing and that these weren't just for show.

There's not much evidence of human construction on the tops of the castle rock.  However this picture does demonstrate how rugged are the sides of the rock and what a good viewpoint it makes.  No wonder that it has been popular as a fort for as long as people have been in the area! 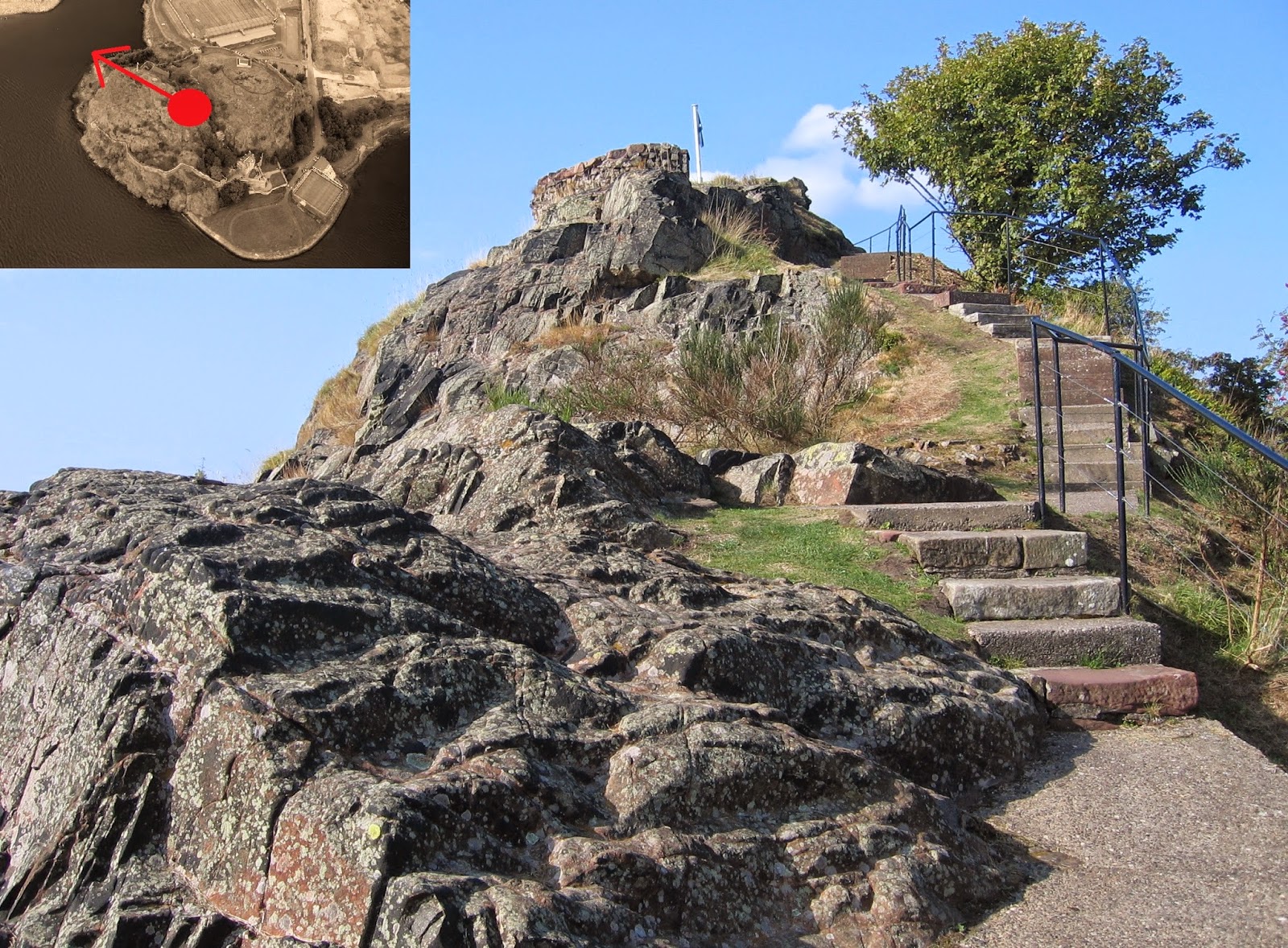 The path up to the taller, western part of the rock is steep and tortuous.  Apparently General Simon, the French prisoner, was allowed to walk this way twice a day as a special privilege.  He was accompanied by 2 guards during these excursions, mind! 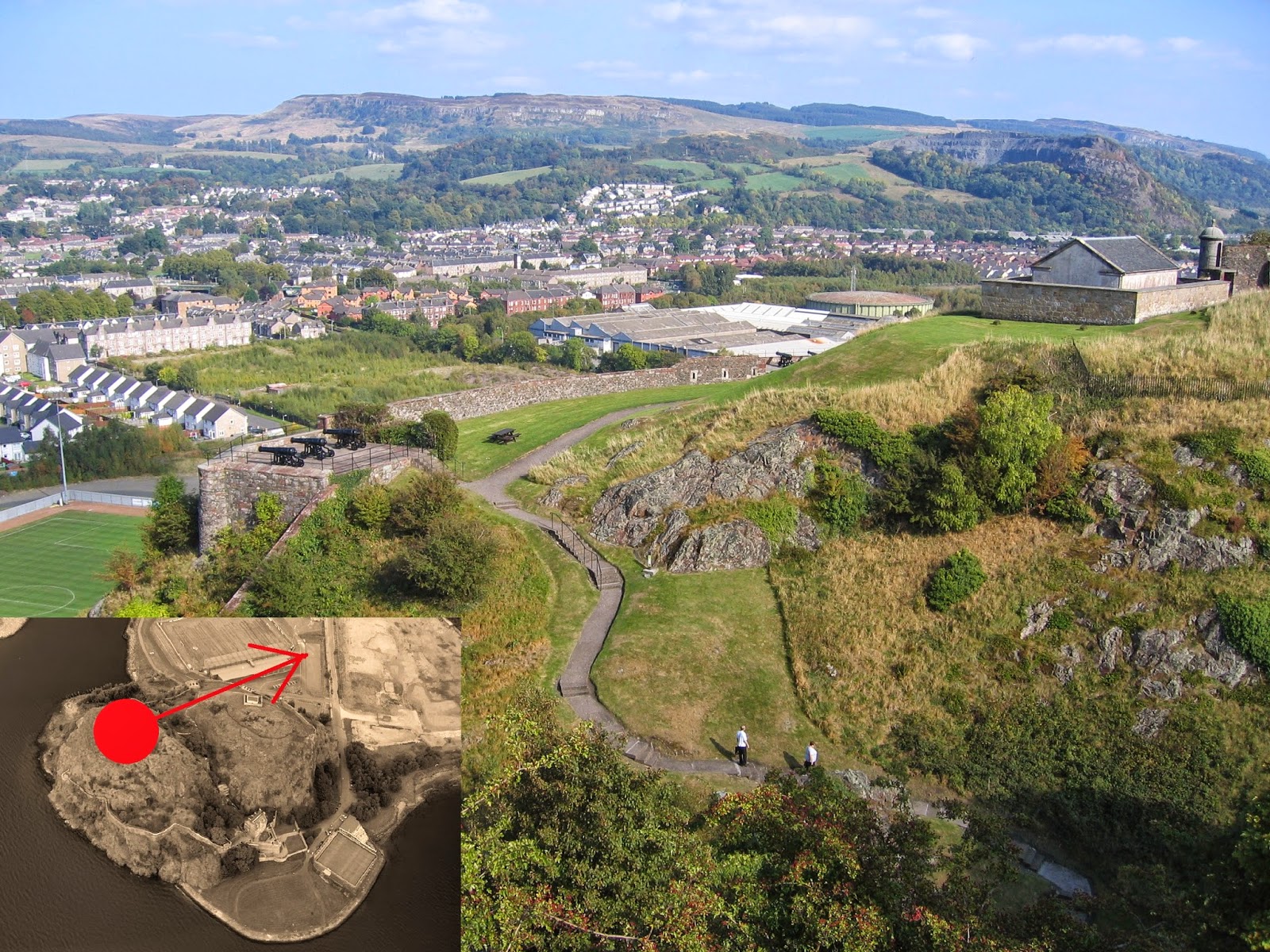 From the top of the hill, the modern town of Dumbarton can be seen spreading out to the north and west.  In this picture you can clearly spot the double-walled magazine on the lesser peak, together with the Duke of Argyll's Battery.  The smaller Prince Regent's Battery is partially hidden, just behind and below the magazine. 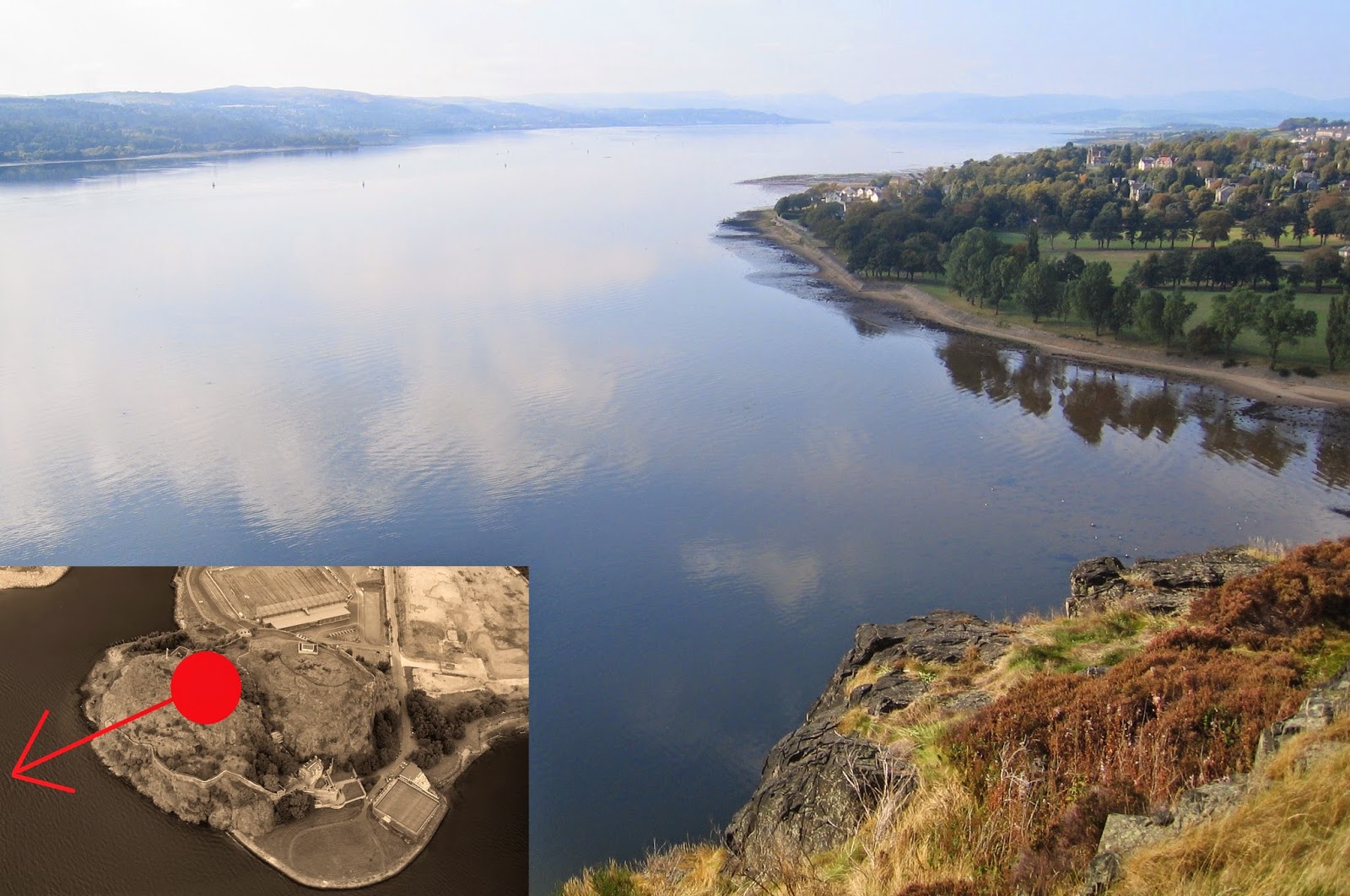 Finally, here's the view down the Firth of Clyde.  The Clyde flows from bottom to top, while the river Leven joins from the right.  Any attacking fleet, whether they are Viking longboats or French ships of the line, would be visible for many miles and would have to pass the channel in front of the castle to go anywhere further.  Good luck with that!