In my last post (here), I mentioned that I had played games of both SAGA and All Thing Zombie recently.  The ATZ game was quite a small one, but here it is anyway... 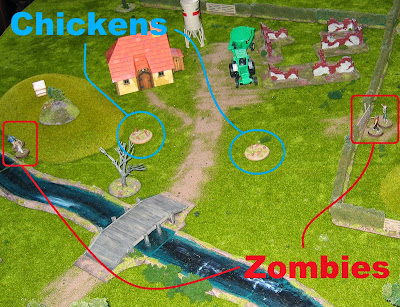 Bridge Farm is an isolated house surrounded by fields, woods and a small river.  The people who live there have heard about the zombie plague, but have written it off as something that only happens in big cities.  Nothing to do with us country folk, then - until today, when strange people, acting in peculiar ways, have invaded the farm.  Only the farmer's wife, Marjorie Armitage, and her teenage son, Billy, are at home, when the chickens in the yard start to make a terrible noise.

Mrs. Armitage reached for her husband's shotgun and loaded it carefully.  "You stay here, Billy", she said to her son.  Even though he was nearly as tall as her, she couldn't think of Billy as being anything other than a little boy.  "I'm just going to find out what's spooked the chooks".
"Mum, I'm coming with you!" the lad replied.  "I'm not staying here on my own"  He reached for his hand-me-down hunting rifle and looked defiant.  Mrs Armitage stared at her son for a moment and then made up her mind to let him come too.  In truth, she felt a bit scared and would be glad of the company.  "OK, but stay behind me and do exactly what I tell you to do" she said.  She turned, lifted the latch and stepped through the farmhouse door into the daylight...

The humans must clear the table of zombies without any of the people being killed.  It doesn't matter so much if the chickens are hurt, though.

1. The river is fast-flowing, deep and dangerous.  Any model which enters it must test against REP:

2. Chickens are a nominal REP 1 for determining when they activate, taking the "brown pants" test when charged and for determining their combat dice in melee.  They act as follows: 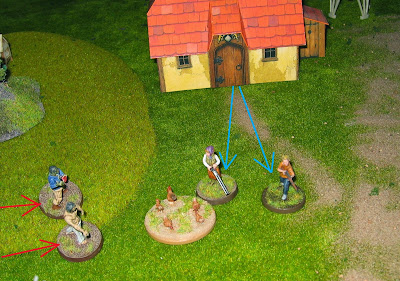 Marjorie and Billy strode straight out of the front door of the farmhouse and down the path.  This was a brazen move and it started to look unwise as 2 putrid corpses lurched over the hill in front of them.  Another pair of zombies approached from the other side, but they were further away and could be ignored for a moment.
At this point, the humans had to take their one-off "Zed or no zed?" tests for the first sight of a zombie.  They were very lucky: both mother and son passed 2d6 and weren't particularly bothered by the sight or smell of the living dead! 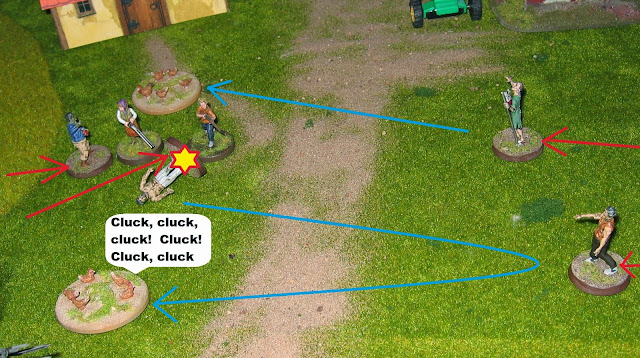 Sadly for the family, the zombies were in hunting mode now!  They activated again immediately and charged at the nearest targets.  Unsurprisingly, the chickens ran this way and that to escape the clutches of the monsters, but this merely unveiled the humans and the zombies attacked them instead.  Billy, despite having his hands full with the rifle, managed to knock his attacker to the ground.  Marjorie had more trouble though; she ended up evenly matched with her assailant. 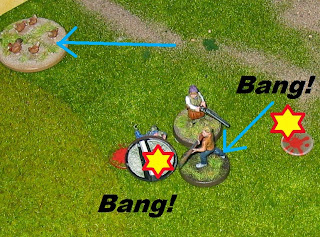 Seeing his opponent writhing on the ground, Billy raised his rifle and fired a single shot into it.  The noise from the shot seemed very loud as it echoed around the farmyard, but no more zombies appeared.
Billy then realised that his mother was struggling against the other zombie (2 rounds of evenly matched in a row!), so he ran over to help her.  This intervention seemed to be the break that his mother needed; she finally pushed the zombie from her and Billy shot it too before it could regain its feet.
Meanwhile, the chickens wandered about in the background, scratching the dirt and looking for worms. 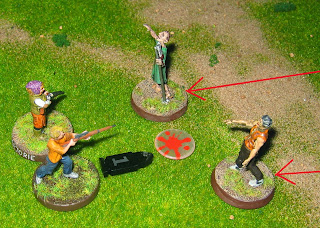 The family wasn't out of the woods yet (in a manner of speaking!), as the other 2 zombies were now approaching.  Billy tried to shoot one of them, but his hand was trembling too much from fear or excitement and he missed. 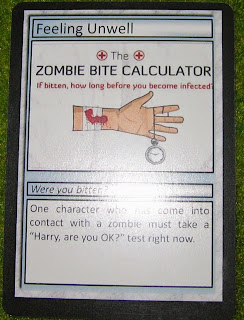 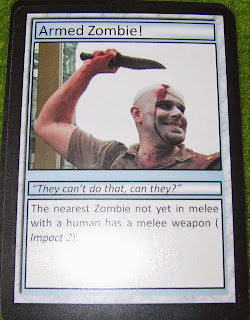 In a flurry of excitement, we then rolled not 1, but 2 random events in a row!  Firstly, Mrs Armitage went pale and swayed  from side to side.  "Mum!  Are you all right?" called Billy.  She shook her head to clear it.  "Don't fuss", she replied.  "I just had a funny turn, but I'm fine now.  Watch out for that one on the left!  I think there's a needle attached to the drip stand he's carrying".  [Marjorie survived the random "Harry, are you OK?" test and the "hospital" zombie was determined to be carrying an offensive weapon]. 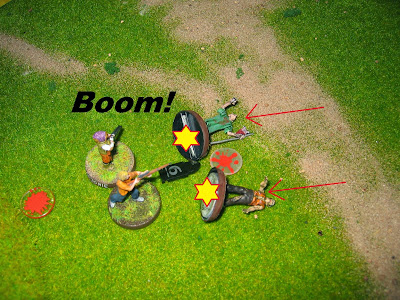 The zombies charged, but Mrs Armitage proved that she was feeling better by snap-firing her shotgun at the attackers.  The blast caught both of the undead, tore chunks from their bodies and threw them to the ground. 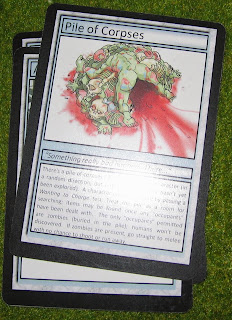 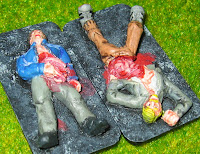 Another random event!  This one didn't have much effect on game play, as the Pile of Corpses was located out of sight, on the other side of a hill.  Still, I guess that Mr Armitage and the elder son won't be coming home tonight.  Not as living humans, at least... 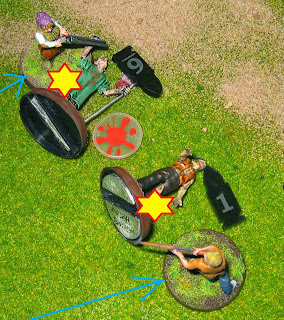 Once again, the fallen zombies struggled to rise [failed activation!], so the mother and son strolled over to the undead and executed them with gunfire.  With that, the game ended; all of the zombies had been eliminated and Bridge Farm was saved!

That was a short, sweet game!  I was a bit disappointed that the river played no part and that the chickens only a very small part in events.  Still, you cannot force the story to unfold in any particular way!
Almost all the dice rolls were in the humans' favour; it was quite creepy at times:
If almost any one of these rolls had gone differently then the outcome could have been very different.  But then, you sometimes just get lucky!