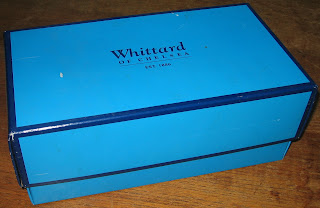 During my recent tidy up of my hobby area, I found a medium-sized cardboard box on the shelf above my desk.  I knew that this was something I'd used for storing models of unusual sizes and shapes, but I couldn't remember exactly what was in it.  So, let's open it up together and find out... 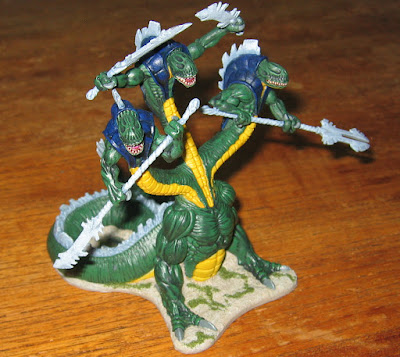 First out of the box is a Koralon Hydra, from the old Void 1.1 range of miniatures .  This is a huge creature with a long tail, 2 legs and a snake-like body that splits into 3 torsos, 3 heads and 6 arms.  It's an extremely improbably animal, but the fluff says that it is bio-engineered - so that's OK.  Constructed creatures can be any shape or size you like and can have any desired number of features!

The hydra is supposedly the Koralon answer to a tank: it's hard to kill but not especially bright. 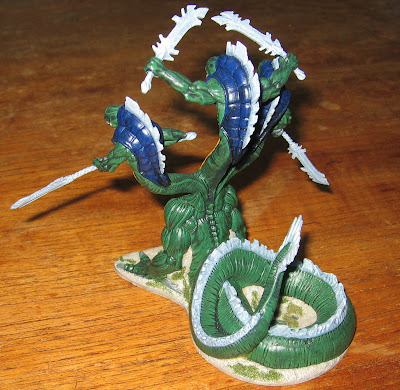 I'm really not sure how the hydra moves itself.  Does it walk on 2 legs, dragging its tail behind it?  Or perhaps it slithers on its belly and the legs are just for show (or for attacking enemies)?  Perhaps the silliest idea I've had is that it hops like a giant kangaroo?  Hmm, maybe I'm over-thinking this; I should just let it be a big, scary monster.

Note that the way that the weapons stick out makes this a very awkward model to store.

The Void 1.1 Koralon range is still available from Scotia Grendel, if anyone is interested... 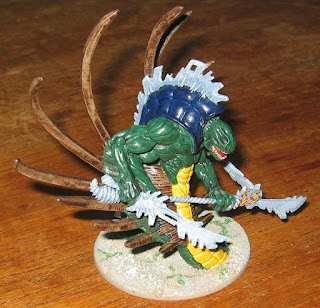 Here's another Void 1.1 Koralon gribbly: the Broodmaster.  It's a giant, 4-armed snakeman with a bony shell on its back.  Additionally, it has some seriously huge spines protruding from both sides.  As its name suggests, the broodmaster is designed as the leader of a battlegroup of Koralon snakes/slugs/bugs.

Like all the other Koralon models, this creature has no eyes.  Instead it has some recesses in its skull which are presumably a different form of sensor.  Perhaps it is able to detect heat traces, or has an exceptional sense of smell?  I don't know - and maybe it doesn't really matter anyway.  It's good news if you don't like painting eyes, though. 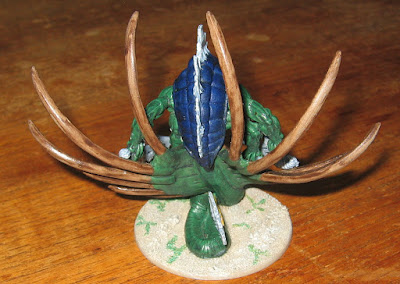 When I first built this model, I did consider filling the gaps between the spines with aluminium foil and then painting an elaborate threat display pattern on the resulting "wings".  However, as you can see, I didn't go as far as this.  He (she?) is still a very intimidating monster even without such an enhancement.

The broodmaster model is also still available from Scotia Grendel. 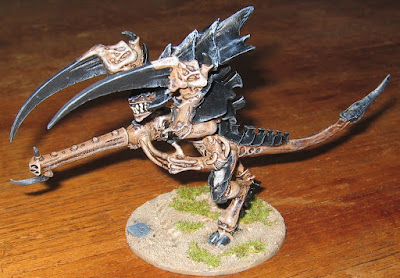 The last critter from the box is a Tyranid Hive Tyrant.  This is a much more common model, coming as it does from the mighty Games Workshop.

Occasionally I buy Tyranids or Necrons from eBay to add to my existing forces, but the pickings in recent years have been poor - the selling prices are too high for my liking.  This guy was a lucky find from many years ago; I think he probably came with a partly-constructed bulk lot and I needed to put a bit of effort into resuscitating the model.  However, it's so long ago that I cannot remember for sure. 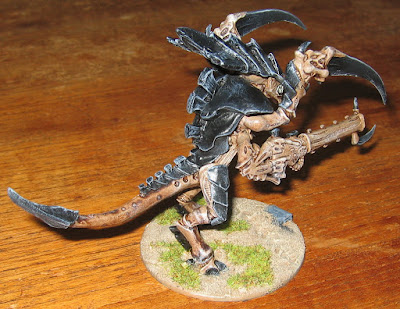 I really prefer my bugs to be armed with claws and teeth alone, or at a pinch with crude melee weapons.  There must have been a good reason why I added a cannon to this model: perhaps it was already glued on when I got the item, or perhaps I didn't have any claw arms in my spares box? 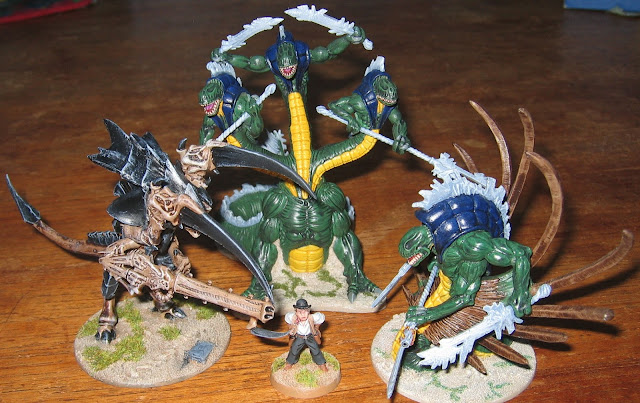 I've mentioned several times that these are all large models, but it's worth a picture to show just how big they are.  Kid Sheleen, one of my 28mm Old West gunslingers, has volunteered to stand in front of the 3 alien menaces so you can make the comparison.  If he's very lucky then they'll all fight with each other over the tasty, bowler-hatted morsel and he'll be able to escape...

I'm not sure that I like the hydra very much, but both of the others appeal to me in different ways.  Do you have a favourite, or is there a giant monster from a different range that you prefer?  Please let me know.
Posted by Colgar6 at 19:55