Everyone who has been making models for a while has at least one kit that they've had forever without finishing it, right?  Maybe it's a subject that you're less interested in now than previously, or maybe there were technical difficulties which have paused the build.  But you'll go back and finish the piece any day now, won't you?  Just to show that you're not a quitter... 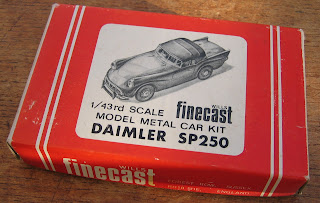 In my case, there's a further story to be told about this long-dormant kit.  My uncle (my father's twin brother) was a bachelor and devoted his leisure time mostly to building and flying model aircraft.  However, at one time he also owned a red Daimler SP250, known to my immediate family as "Grunty" due to the noises it made.

Sadly, my uncle died of brain cancer in 1984, whilst in early middle age.  While we were clearing up his effects, we found this Wills Finecast kit of an SP250.  Obviously my uncle had planned to build a model of his vehicle - but he never got round to it.  Amongst the relatives, I was the model-maker and so this kit passed to me; I promised myself faithfully that I would build it in tribute to him.  So, that was in 1984...

Over the years since then, I've occasionally opened the box and even more occasionally I've had a burst of enthusiasm and built some of the kit.  I think that I probably glued it together in the 1980s, undercoated it sometime in the next decade and have all but ignored the model since then.  A few years ago, I painted the red basecoat and that was that for a long time.  Indeed, the partly painted model can be seen in quite a few of my workbench updates over the years, if you care to look.

At one point, I even considered getting rid of it, thinking that I would never finish the car.  However, that didn't happen and it sat around, silently accusing me of being incomplete and unloved.

Finally, after a summer with a workbench too cluttered to build anything, I tidied up [The Big Tidy].  As part of this task, I collected all the part-built models that were out, excluding those which are packed away in boxes.  Having everything in one place like this makes it very obvious what is taking the most space, which models can be completed easily and so on.

I'm currently trying to work my way through and finish at least some of these collected "works in progress" before I get too distracted with something new; the Daimler was one of the earlier models to receive this treatment.  Get this: I finished it last night!  It's no longer a millstone around my neck!

OK, now the bit you've all been waiting for: the pictures:

At 1:43, this model is really a bit too large to go with 28mm figures.  Still, plenty of other people do use this scale of vehicles to go with wargaming figures.  After all, if the person is on a base then it makes them look taller than they really are.

So, I could use this model for gaming.  The obvious setting would be spy-fi, such as 7TV, though at a pinch it could be a classic car in a more modern zombie game.  Alternatively, I could stick it on a mantlepiece and let it gather dust.  Hmm, what to do?
Posted by Colgar6 at 21:48