I have completed almost no models over the last 2 weeks or so.  This is in part to my son asking if he can use my workbench pretty much every evening during that period and partly because I've started a large number of fresh builds.  Hopefully these will all bear fruit in a month or so; I'm becoming buried under part-finished figures yet again!

By the way, I'm absolutely delighted that one of my children is enthusiastic about what I do in my spare time.  I just wish we had enough space for him to have a desk of his own!

In no particular order, here are some of the new models that I've started in the last few weeks.  I'm not going to say a whole lot about any of them, since I might do that in any future, more detailed articles.  Still, a brief description of each picture will be included.

These are horses from Wargames Factory.  They're made for their ancient Persian cavalry, but can (could?) also be obtained as separate sprues.  Importantly, for my purposes, they don't have any harness or saddles on them; I plan to paint this lot up as loose animals for my Old West setting.  They could be milling about in a corral or they might be used as a herd of wild mustangs.

I've had these sprues for some time and I wasn't in any hurry to build & finish them.  However, during the recent school half-term holiday my daughter came up to me one day and said "I'm bored!".  I replied "Would you like to help me build some ponies?" and she was thrilled by the idea.  She clipped all the parts out; I finished them off and glued them together.  However, my thoughts of further daddy/daughter time were dashed when I asked if she'd like to help paint them on another night.  "No, you do it" was her response.  So now I have a dozen horses cluttering up my table, in addition to everything else... 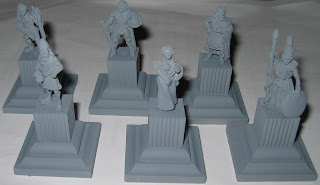 6 statues are required for one of the scenarios in the Frostgrave rule book.  I'd been planning to make some for a while, but was always held back by the lack of pillars that I liked (more specifically, by the lack of materials from which to make such pillars).  However, I recently found just the right type on eBay, so here we are... 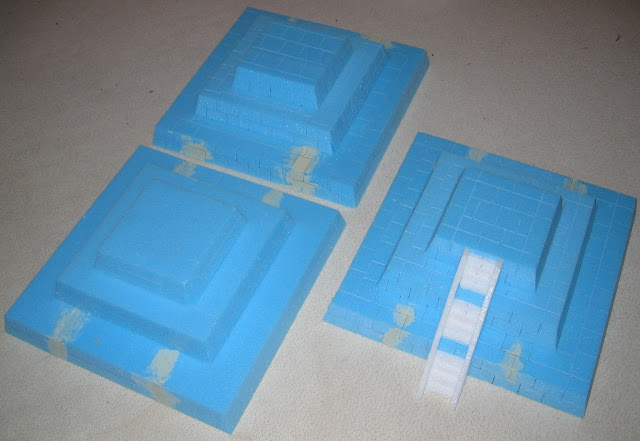 Obviously, these are step pyramids, in various stages of construction.  I had originally intended to make 4, but I ran out of blue polystyrene sheet.  I can't quite decide whether to finish them all for Frostgrave (snowy ruins) or for Tarzan (jungle ruins), or a mixture of both.  Either way, they'll be awkward to store; they're much larger than I had anticipated! 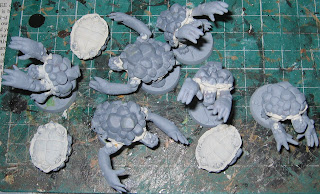 These strange creatures are part of the Rock Top Gang; a bunch of ferocious Chibi tortoises (!) for the Super Dungeon Explore game.  The rest of the gang are in various other stages of painting from completely finished to raw undercoat.  And then there are all the other miniatures from the game; they'll need to be painted too... 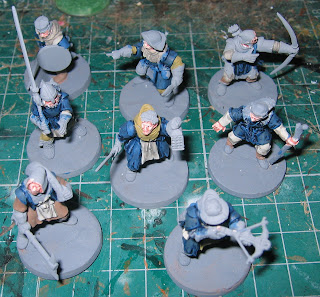 Some official Frostgrave miniatures.  I decided that I wanted a more homogeneous bunch of followers for Mysterio, my Soothsayer.  They all have some blue (his colour) in their clothing, but the rest of their outfits will be a mixture of wools, leathers and other materials. 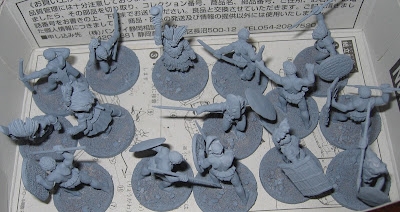 Finally, the above is a box of undercoated Jungle Cannibals.  I'm expecting that most of these will be very simple to paint as they don't have a whole lot of clothing or equipment, though some of them have ritual masks or more significant headdresses.  We'll see.

Email ThisBlogThis!Share to TwitterShare to FacebookShare to Pinterest
Labels: Workbench