Another Sunday in October; here's another Zomtober post.  As ever, the rules are that I have to show at least 1 zombie or 1 survivor.  However, I've made a habit of showing one of each, posed as a duel.  This week, its "B.B." versus "Cocktail Waitress Zombie" (CWZ). 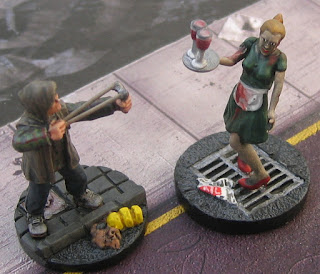 I've talked before about the possibility of zombies retaining some form of instinctive need to finish a task, notably with my zombie ballerina.  I imagine that in a few, extreme cases, a fresh zombie may attempt to carry on with some activity in which they were engaged before they were "converted", at least for a short time.  This might be used to explain those rare cases where the living dead wield a weapon including, on rare occasions, a firearm.

Thus it is with Cocktail Waitress Zombie: she's attempting to carry a tray of drinks without spilling them.  This is complicated by the fact that her high heels have caught in a drain cover.  The proximity of the interfering human isn't helping either! 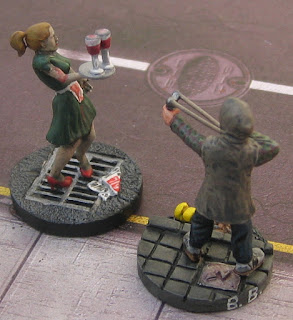 "B.B." is a young hooligan with a catapult.  Some may sneer at this as a weapon, but it has many advantages:


Of course, there are some disadvantages as well: 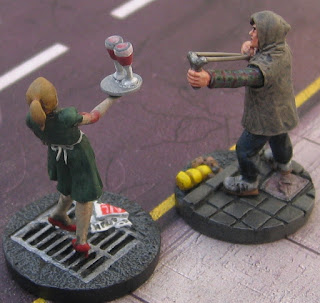 CWZ is a Wargames Factory "Zombie Vixen", built straight out of the box.  I've added a couple of wine glasses to her tray; these come from Black Cat Bases.
B.B. is one of Offensive Miniatures "Street Kids", from their near-future rioters section.  I made the catapult elastic from a length of plastic rod, but otherwise he is also unmodified.
Both models are mounted on resin urban bases from Escenorama. 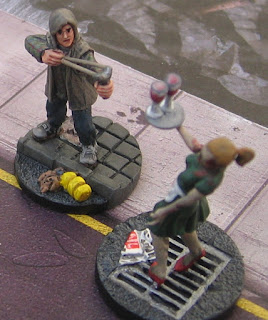 Here are the questions in my mind about this encounter: 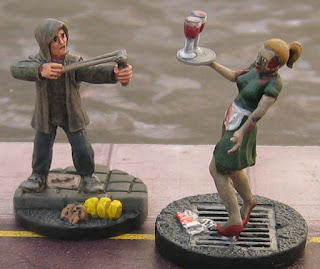 What do you think?  What happens next?