Earlier this year, I completed some stepped pyramids as scenery for my games.  So far, they've been used exactly once in an arid setting (Doctor Who and the Pyramids of Venus), but hopefully that will change soon.

Even at the time I made them, I intended the pyramids to be used in multiple different types of terrain, such as in frozen wastelands and steaming jungles.  However, the bare masonry wouldn't look quite right anywhere other than a desert, would it? 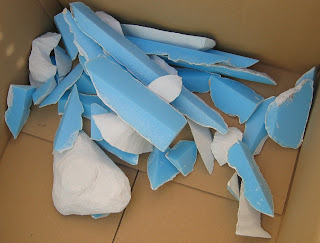 Fortunately, I still had a large number of offcuts of the blue polystyrene from when the pyramids were built.  Even better, the edges of these scraps were already cut to the same angle as the sloping sides of the models. 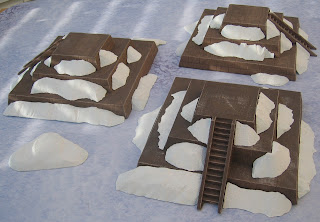 It was a simple matter to take my hot wire cutter to the fragments of polystyrene and sculpt them into irregular shapes.  I cut the ends on some of them square so that they could fit against the staircases; the remainder were rounded off all along their lengths. 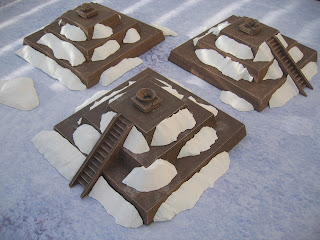 Once the pieces were cut to size, they were painted white, with a little fine sand added to the paint for texture.  This took rather longer than cutting the pieces out, as I needed several coats of paint and had to wait for each one to dry before applying the next.  Still, it wasn't exactly an onerous task!

Although I haven't used them in a game yet, I think these add-ons should hold in position fairly well.  They are very light, but there's still quite a lot of friction between them and the main building so I don't think they'll be knocked out of position too easily.

The white drifts will allow me to use the pyramids in a snow-and-ice setting.  I'm wondering now if I could do something in this line for jungle?  I could use similar offcuts and paint them brown, then cover them with vegetation.  To look effective, I suspect that such jungle "drifts" would need rather more effort than the piles of snow, but maybe it could work...
Posted by Colgar6 at 16:44