Anyone who has been following my blog recently will know that I'm preparing to play more Pulp Alley, specifically Scenario 2 ("Final Flight") from the Perilous Island campaign.  That scenario is set at an airport somewhere in Africa, though it could just as well be Latin America, Asia or elsewhere.

I've been collecting figures to make the necessary crowd of agitated civilians (although I think my version will be quite a weeny crowd).  However if it's an airport then I'll need something else as well: terrain and aircraft models.  Here's the first of them. 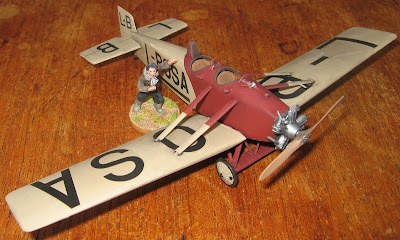 28mm wargaming figures are often regarded as about 1:56 scale.  There aren't any 1:56 scale model aircraft!  I'll probably regret being as definite about that, as someone may well point out an obscure range somewhere, but generally speaking it is true.

Aircraft modellers stick to either 1:72 or 1:48.  The former is really much too small for 28mm figures, though it would probably work well enough to represent craft flying high over a battlefield.  1:48 is a bit too big, but not impossibly so - especially if you stick to smaller real life aircraft.

Most of the pictures in this article show one of my 28mm pilot figures standing beside the plane.  Judge for yourself how compatible he is in size. 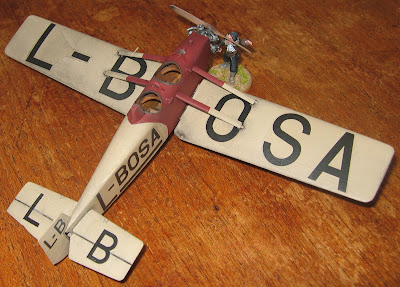 There are hundreds, if not thousands of 1:48th scale aircraft kits.  However, not many of them come from the Interwar period - and those that do are mostly warplanes.  The Avia BH-11 model is one of the few exceptions to this, fortunately for me!

This kit is released by SMER and has one overwhelming advantage, at least in terms of being my first 1:48th scale aircraft model: it was very cheap!  The model only cost me a few pounds, so if it turned out not to be suitable for gaming then I could afford the loss. 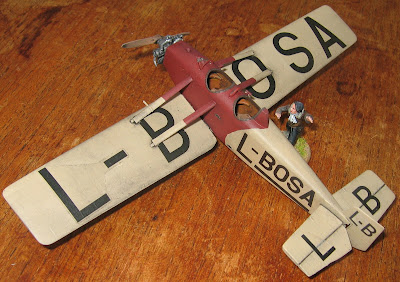 So, how was the kit to build:

I've copied a colour scheme, semi-faithfully, from a modern restoration aircraft.  For my purposes, it doesn't have to be completely authentic, it just has to look plausible.  The decals for the lettering are home made, but based on the original plane.  I think it works well enough...

This is a nice, cheap and relatively simple model that will do well for games, as long as it's handled with a certain amount of care.  I can see it being the ride for an early round-the-world aviator, or belonging to a rich enthusiast who likes to visit the more dusty and backward parts of the world.  Alternatively, it might be the cobwebby, old banger left in a corner of the flying field, just waiting for the hero to use it in his/her daring escape!  You decide...