We've started playing the Perilous Island campaign for the Pulp Alley rules.  Scenario 1 can be seen here and that was easy enough to set up because I already had all the figures and terrain I needed.  However, Scenario 2 in this campaign is set at an airport, with a large crowd on the verge of rioting.  I think I need some new scenery for this; also I'll need as many "crowd" figures as I can find.

I did consider making some 28mm standees for the crowd, either of individuals or of mobs.  However, my early searches failed to find any pictures that I felt were suitable for this purpose.  Plan B is to search through my spares boxes and paint up all the figures I can find which could plausibly be found at an airport in Africa, some time in the 1930s or so. 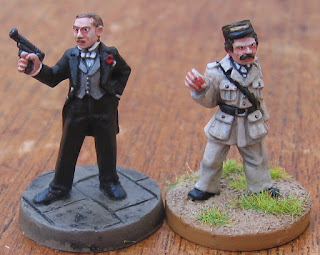 First up are a couple of very smartly-dressed gentlemen: 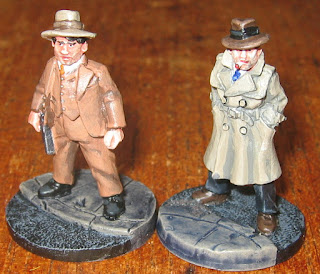 Next, I present the remaining 2 figures from the Copplestone GN9 - Sleuths pack: 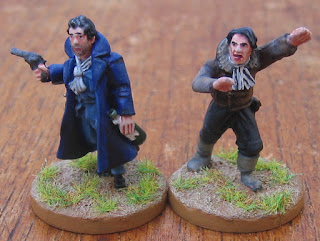 My last 2 figures for today are both from Artizan Designs, again from the Thrilling Tales subsection:

Why are these characters at the airport?  Are they trying desperately to get on the last flight out of the country?  Perhaps they're trying to arrest a fugitive, or they're spies who are shadowing someone?  Maybe they just work at the airport?  Who can tell?

6 figures isn't really a crowd.  Even if I add all the other miniatures I have which are vaguely plausible for this setting, I'm not sure that it'll really look like a mob.  But I've got to try...
Posted by Colgar6 at 16:25