It wasn't so long ago that I finally made a start on collecting some figures for a Tintin league, probably for use with the Pulp Alley rules:
At the time of the latter, I bemoaned the fact that 1st Corps had hinted they would release some "not Tintin" figures in the near future - just after I'd gone to a certain amount of effort to find a suitable figure to represent Captain Haddock!  Well, for completeness (and because they have produced a lovely model of Professor Calculus) I just had to have some... 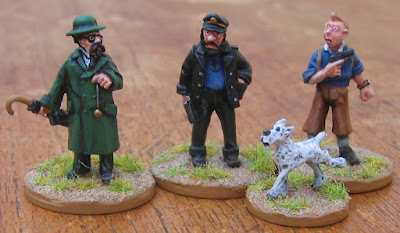 For the very reasonable price of £5 (plus postage, of course), 1st Corps now produce this set of 4 models.  I'm not going to pretend: they do look a great deal like Professor Calculus, Captain Haddock, Tintin and Snowy to me.  However, they are listed in the catalogue as "nosey youth and companions", so if you want to find them then search for that instead. 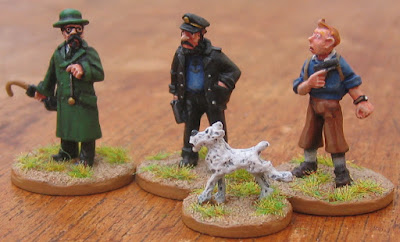 I'm not very familiar with 1st Corps as a manufacturer and so I have no idea if these are representative of their sculpts or not.  Overall, I'd rate this set as "good" rather than "excellent", I think.

For the record, here are the earlier figures that I painted:


This previous Tintin is from Copplestone Castings (now sold through North Star) and my Captain Haddock is a converted fisherman from Black Cat Bases.


So, now I really need Thomson and Thompson - but models of bowler-hatted, moustached city gents seem very hard to find...