I'm supposed to be writing an All Things Zombie battle report, but I'm procrastinating.  Battle reports are a lot of effort!  Instead, here's a bunch of oddments that I'm working on or have just finished...


This guy is a Reaper Bones golem; I intend to use him as a large construct for Frostgrave.  He is certainly large: that's a 40mm base on which he is standing!

This was a very easy model to paint.  I used a pale grey base coat with gold bands and fittings, all covered with a black wash.  Once that was dry, I added some colour to make the eyes glow and that was it!  A cheap, simple model, but I think he's quite effective. 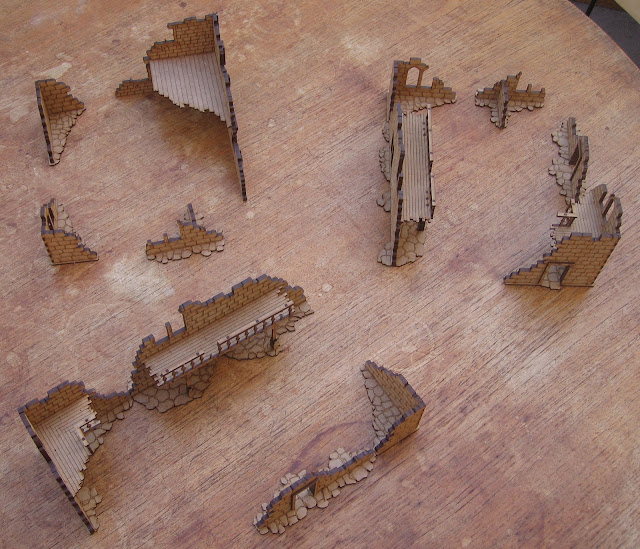 I recently ordered a fair quantity of MDF ruins from Blotz.  The package arrived promptly and I spent part of a couple of evenings gluing it all together.  Now comes the tricky part, though!  I intend to mount these permanently on building-sized bases; the picture above shows one possible configuration that would give 3 separate ruined houses of roughly equal size.  But obviously there are other ways in which this could be done.

Once glued together, I plan to add more detail to the bases so as to make these a bit more "lived in" (although that's not really the best turn of phrase for abandoned structures, is it?).  But that's where I'm having difficulties: how to turn these base pieces into plausible, but still playable, ruined buildings.  Hmm...

Not so long ago, I discovered that buysend.com has a fair number of Super Dungeon Explore sets available at a very reasonable price.  I've now bought more of these than I should and I still have the best part of 2 complete warbands to paint up.  Here are some heroes and villains that I've finished recently:

This hero comes from the Kobold warband set "The Claws of the Wyrm".  It's not clear from the short description on the packaging whether he's an elven hero with a magic sword or a kobold hero with a magic elven sword.  Either way, he's growing on me... 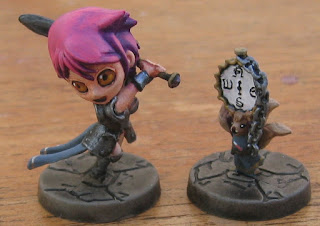 Candy is something of a mascot for Soda Pop Miniatures.  In this incarnation, she has (some) armour and a large sword.  She's always accompanied by her pet, a 3-tailed squirrel-thing called Cola.


Nyan Nyan is another hero, though in this case she looks as if she'd be more at home at a pyjama party.  She's dressed up in a tiger costume and wears a pair of oversized gauntlets equipped with large talons.  Very odd...


Finally, here's an evil mini-boss: Captain R.  He's an undead pirate captain - I really don't know where they get these ideas!  Most of the front of him is beard and face, whilst most of the back is coat.  He's carrying quite an array of weaponry, as might be expected.

I'm a bit surprised to see that all these models are for either Frostgrave or Super Dungeon Explore, as it doesn't feel to me that I've been concentrating solely on these two games recently.  Indeed, my painting table is full of stuff for Pulp Alley, Saga and Congo right now.  Perhaps I'll show some of them soon - right after I write up the ATZ game I should have produced last weekend!