As is my habit in recent years, my son (A.) and I went to Carronade yesterday.  This is one of the biggest wargames events in Scotland, possibly even the largest.  It's held in Falkirk every year, sometime near the middle of May.

So, Saturday 13th May, 2017: the day was overcast and showery (quite a relief after 3 solid weeks of warm sunshine!) and therefore seemed like a perfect day to be indoors at a show.  A. and I travelled by car (the journey from Helensburgh takes about 1 hour and 25 minutes) and arrived some 15 or 20 minutes ahead of the official opening time.  Not to worry, though - the doors were open and we walked straight in.

As in the previous year (see here), the entrance "tickets" were small MDF plaques; these should find a useful second life as bases.  Of course, I haven't used the 2016 ones yet, so I now have 4 of these MDF tokens...

We wandered the halls for a while, intending to find a game to play.  Straightaway we felt that the atmosphere of the show was subtly different from before, though.  It seemed that on the one hand it was much more crowded and on the other hand none of the participation games were well manned (and often we felt blanked by the hosts; they weren't exactly encouraging us to join their games).  Was this all my imagination?  It's possible: I was tired and maybe a bit cranky, so I might have seen issues where there really weren't any.  In any case, I should stress that this didn't apply to all the games uniformly; just some. 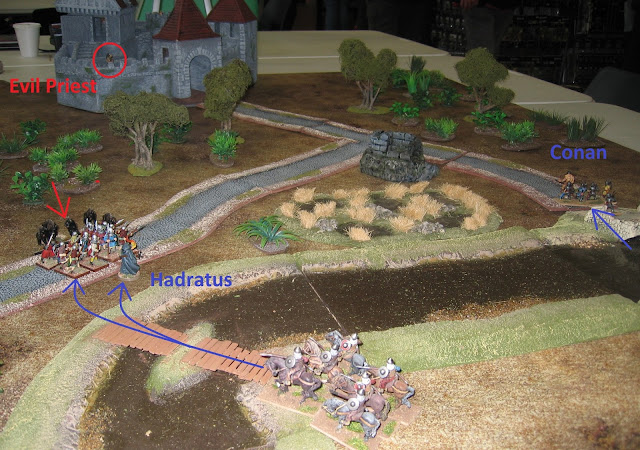 The first game we played was "Conan and the Princess", put on by Glasgow and District Wargames Society.  The game was played using the Dragon Rampant fantasy rules and the scenario was something like this: an evil priest (he had a name, but I forgot it) has captured a princess (she had a name too...).  Conan the barbarian and Hadratus the wizard have been tasked with rescuing her; the king has even provided some troops to assist.

So, we'd simply stroll up to the castle walls, look fierce and receive our rewards, right?  It didn't quite work that way.  My horse archers (I was playing Hadratus) and Conan's bowmen were very reluctant to move over the river.  Consequently, my spearmen were a bit isolated when they were ambushed by a pack of giant hyenas.  Although they gave as good as they got, the spearmen panicked and fled (snake eyes!).  The remnants of the hyenas were atomised by Hadratus, who turned out to be a dab hand at zapping spells. 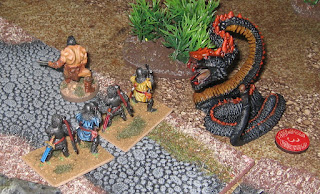 Conan and his boys were pestered by a giant snake which slithered in and out of cover.  The men hurt the monster considerably, but repeatedly it ate the odd footman before being driven off, only to return a few moments later. 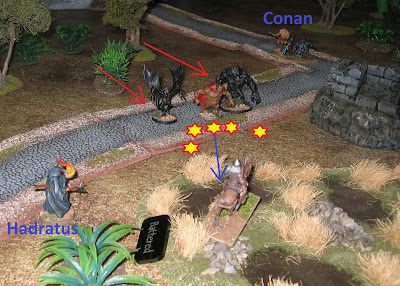 Further up the road, demons leaped out and slaughtered my horsemen, before following up into Conan's archers (off-picture to the right) and slaughtering them too. 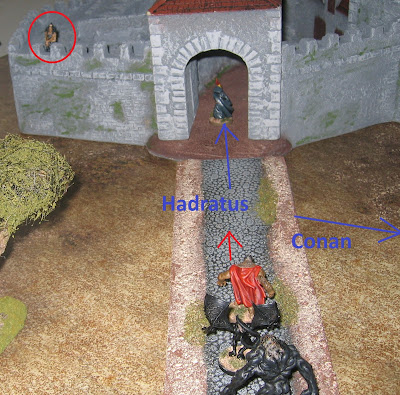 The remnant's of Conan's group (after the snake had finally vanished) were zapped by the evil priest.  This was too much for the big man and he ran away.  Thus the assault party was reduced to just Hadratus, who was running up the road, pursued by the pack of assorted demons.  At least he then made it up on to the ramparts to confront the evil overlord, where he was thoroughly outclassed and minced.

So, we didn't rescue the princess after all.  Oh, well - at least Conan survived... 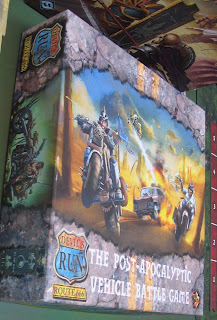 Our second event was a short demonstration of this post-apocalyptic car racing/fighting game.  The game was hampered considerably by the fact that it was on a small, end table in a main thoroughfare; it was busy!  In addition to being cramped, the (single) demonstrator kept having to stop to answer questions from passers by; this disrupted the flow of play considerably. 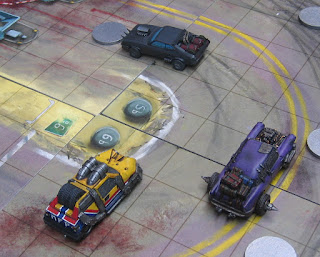 We each took a car and did a 1-lap race around a short circuit.  There was relatively little mayhem, mainly because A. had chosen the fastest (but lightest) car; he raced ahead early and it proved all but impossible to catch up in order to ram him or otherwise interfere.

The models for this game look very nice indeed.  However, what we saw of the rules seemed uninspired and flat.  Of course, caution should always be used in such situations: a convention game may well have been dumbed down or used an "introductory" variant of the rules.  Or indeed, in our very short acquaintance with the game we may have misunderstood or missed some subtleties.  But I won't be racing out to buy this one...

We had to go outside for lunch; there was absolutely no seating space available indoors and there were queues waiting for the few chairs and tables.  This was quite welcome anyway; it was becoming quite hot and stuffy inside the premises and even though it was spotting with rain outdoors, we ate our packed lunch in relative comfort.

Once back inside, I picked up a pre-order from Colonel Bill's stand (definitely an easy way to shop and with a 10% discount for show collection as well!). 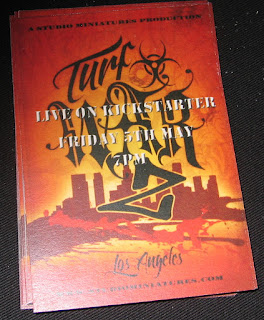 Another zombie game?  There are so many sets of such rules available already - and I think a newcomer would have to be very special to displace All things Zombie and Zombicide.  Well, this one advertises itself as a game about gang warfare in a post-apocalyptic city - with zombies. 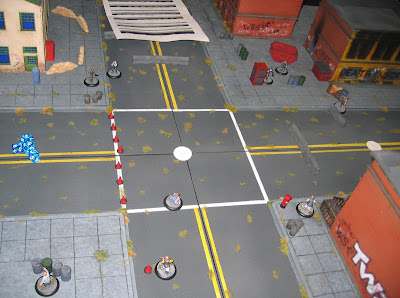 A. took a Latino gang (near side) against some other guy's policemen (far side).  The rules for this game seemed very old-fashioned (compare attacker and defender's skill to get a "to hit" number, then roll "to wound" for each hit).  This didn't feel a million miles away from old skirmish games such as Combat Zone or even Warhammer 40K.  We also felt that the zombies didn't really add anything much to the scenario.

I did like the buildings on the table, though... 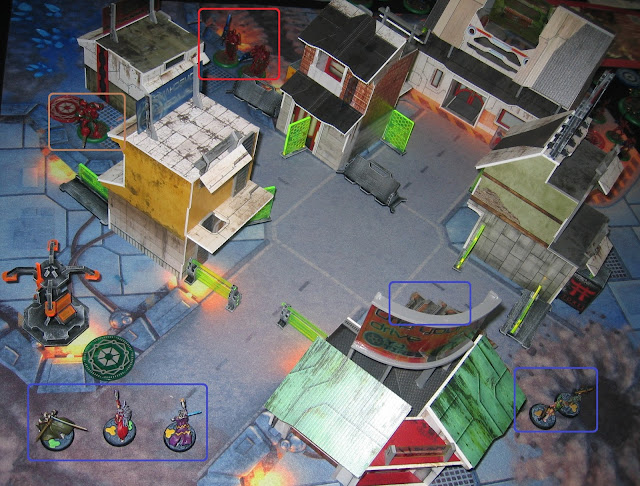 For our final game of the afternoon, we took on a demonstrator at Relic Knights.  As soon as A. saw this anime-styled table, his eyes lit up and we couldn't just pass by.  The rules and figures are by Soda Pop Miniatures (probably better known for Super Dungeon Explore) and are obviously very heavily based on popular Japanese comic styles.

A. (with me advising) took the Cerci Speed Circuit faction; these are a bunch of adventurers/adrenaline junkies/racers, as far as I can tell.  We were up against a group that claimed to be some kind of space knights or paladins, but they had dull red armour rather than bright shiny stuff.  I reckon they weren't quite the good guys they claimed! 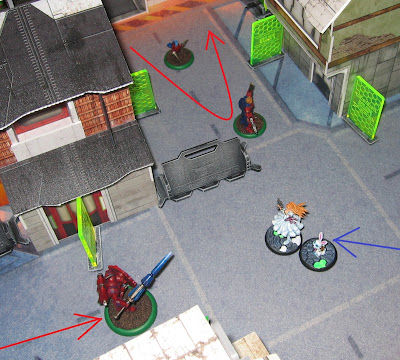 The game is heavily based around a small number of heroes; squads of minions support them but don't achieve anything much in their own rights.  Game play is via a deck of cards; each character has a number of special abilities which need cards of the right colour in order to activate.  From that point of view, it reminded me very slightly of Malifaux, though it seemed much easier to understand.  There was definitely a sense of the main characters pausing every so often in order to build up to some stupendous move, attack or psychic power! 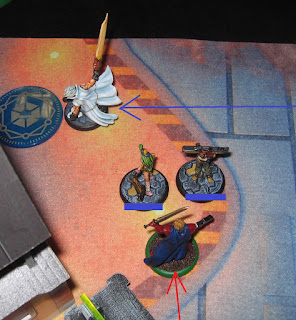 Although the main plot for this scenario was about espionage, we only made a single attempt on an enemy secret (they made none on ours).  Instead, we finally won quite convincingly when the hostile leader was held up by our pit crew squad and then counterattacked and beaten by our sword-wielding, showboating second-in-command (with the white hair and cloak).

[Once we were home, A. has been looking up Relic Knights on the Internet.  This is the first time I'm aware of him taking such an interest in something we saw at a show].

The journey home was something of a trial.  Firstly, the rain was torrential; this reduced visibility and the surface water made driving stressful.  On top of that, the police had closed the road through Gartocharn; I'm guessing that there had been an accident, but don't know for sure.  This meant that we had to take a 40 minute detour around the Kilpatrick hills.

Finally, as we were crossing the last hill on our return to Helensburgh, we encountered a bad accident, with at least 2 smashed cars, 3 or 4 police vehicles and a couple of ambulances.  Fortunately for us, the traffic in our direction kept moving, albeit slowly, and we weren't held up for long.  We didn't see any obvious casualties, but it was clearly not a very good day for someone...

All in all, I was somewhat tired by the end of the day. 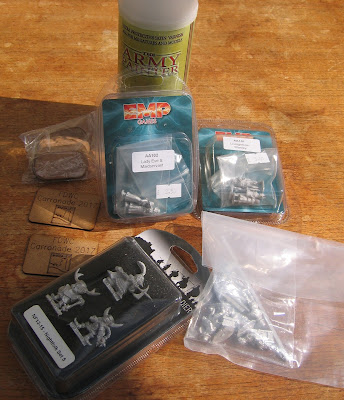 Not a lot of loot, really:

Both A. and I felt that Carronade hadn't been as good for us this year as it had in previous years.  The high school in which it is held seemed very hot and very crowded.  A friend that I spoke to suggested that this might be because the Triples show isn't being held this year and therefore at least some folks from the north of England might have decided to visit Carronade instead and swell the usual numbers.  I don't know the rights and wrongs of this, but it sounds plausible.

In addition to physical discomfort, we felt that too many of the participation games just weren't very inviting.  Maybe my memory and mood are playing tricks on me, but it seems that in the past all we had to do was look vaguely in the direction of a table and we'd be invited to sit down and take part.  There were several games this Saturday that we would have liked to try, but we just couldn't get the hosts' attention or otherwise gain access.  Not all the games were like this, of course.  In particular, the Fury game was so popular that we couldn't even see it past the ring of spectators at the end of the afternoon!

So, final conclusion: tiring and slightly disappointing.  I hope for better next year.
Posted by Colgar6 at 19:53