So, our second game of Hail Caesar was played last weekend.  After last time (here), we decided to avoid built-up areas for now, but we didn't want to line up equal forces for a straightforward "encounter" battle either.
I searched the Internet for suggestions and one of the first sites I found was this: https://janwillembootsblog.wordpress.com/scenarios/ .  The very first scenario in this article was titled "Crusaders raiding an Ayyubid caravan"; that sounded interesting.  It was easy enough to transpose it to 700BC to suit my 15mm armies, so we now have my Assyrians attacking a Hebrew supply train.  Since these supplies are being transported as payment for the Hebrew's Midianite allies, the Midianites have a joint interest in defeating the raiders. 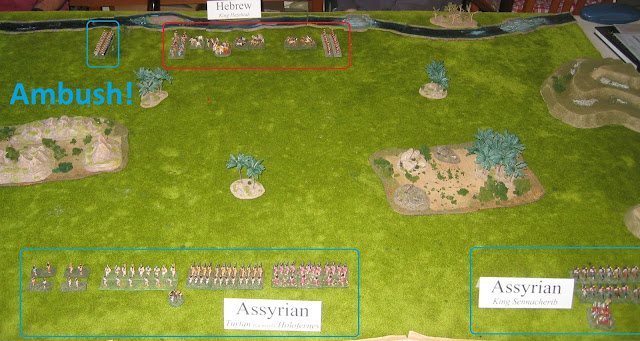 We decided to use 3 divisions each, randomly selected from the 4 divisions fielded in the previous game.  For the defenders:
The attacking Assyrians had these:

The ambush was sprung!  Assyrian regulars leaped up from their hiding places amongst the river reeds and peppered the leading Hebrew unit with arrows.  They did a lot of damage, but not enough to make the defenders flee - or even to prevent them from counter-attacking.

Midianite camels were quick to aid their allies, though the rest of their forces were still some way off.  Meanwhile, 2 of the baggage units attempted to skirt around the ambushers' melee, but they were very slow-moving and didn't get far. 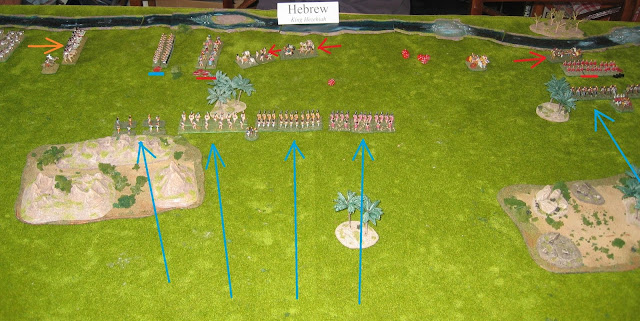 The rest of the Nineveh division moved forwards at great speed, no doubt desperate to relieve their compatriots and much encouraged by the prospect of so much loot with so little protection.

None of the Assyrian reserves arrived. 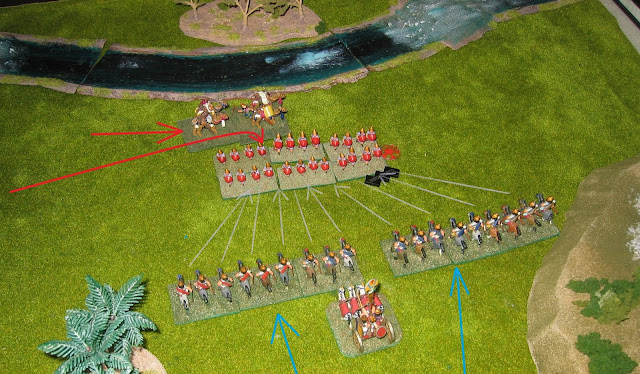 The rearmost baggage and its supporting infantry attempted to double back and escape that way.  Assyrian cavalry advanced rapidly to intercept them, though and it looked as if this part of the caravan might be overwhelmed in short order... 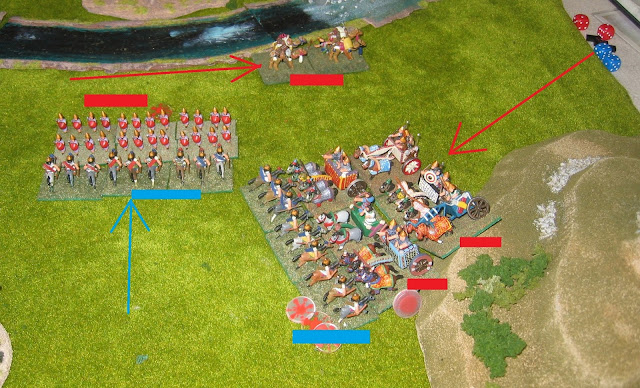 ...but swift Hebrew reinforcements caught the Assyrians in the flank.  The horsemen barely had time to turn to face before the Hebrew chariots rumbled into them.  To be honest, I didn't think my cavalry had much of a chance, but amazingly even though they were thrown back in disorder, with heavy casualties, they didn't break for several turns 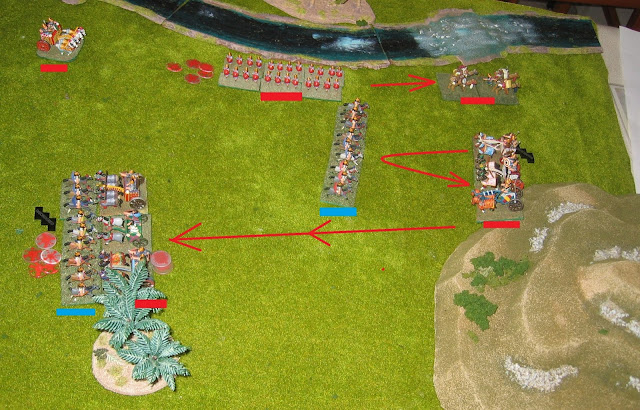 The second Hebrew chariot unit then attempted to catch the other, now-uncovered Assyrian cavalry in the flank as well.  Once more, the defenders only had time to turn and shoot a few arrows - but this time a lucky near miss caused the chariots to fall back in disorder.  Obviously the leader of this group of Hebrews was a court favourite rather than a warrior: I suspect that some prophet or other would be preaching sermons against decadence and nepotism amongst the nation's elite before the week was out!

Meanwhile, the baggage camels were getting away. 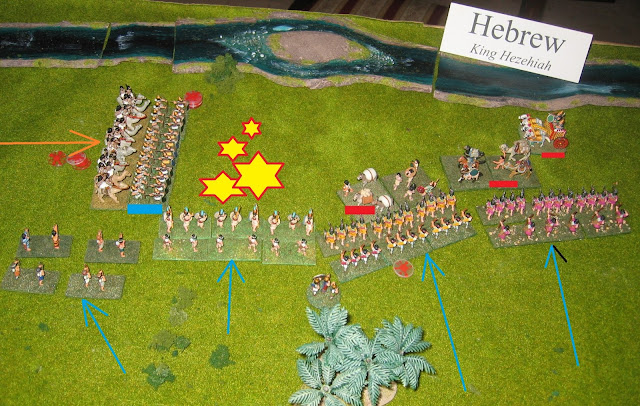 At the head of the convoy, the Nineveh division tore into the caravan guards and started chasing down the baggage, while Hezekiah watched helplessly from his nearby command chariot.

One fly in the ointment was that the leading Midianites were perfectly positioned to charge into the rear of the ambushers.  Astonishingly, the Assyrian regulars held their ground and even inflicted some hurt on their attackers [Maybe this isn't completely surprising, as the Midianite camels are not a particularly strong charging force.  However, they had quite a margin of superiority in this situation and might well have expected to brush the infantry aside].

Assyrian reserves entering the table this turn: none. 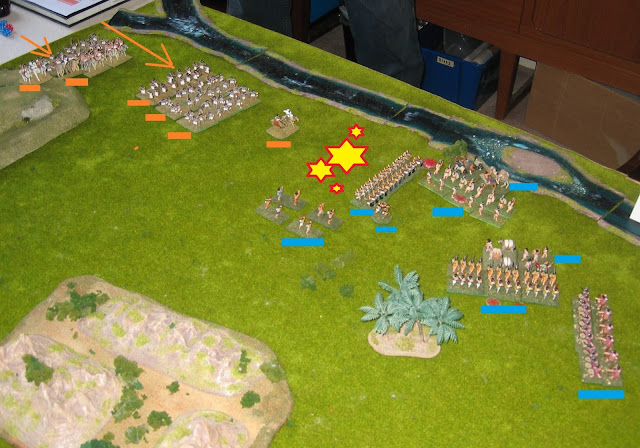 Unexpectedly, the camelry was so badly shaken up that they fled soon after when shot up by some Assyrian skirmishers.  However, there were many more Midianites on the horizon - and no sign at all of the Assyrian reserves. 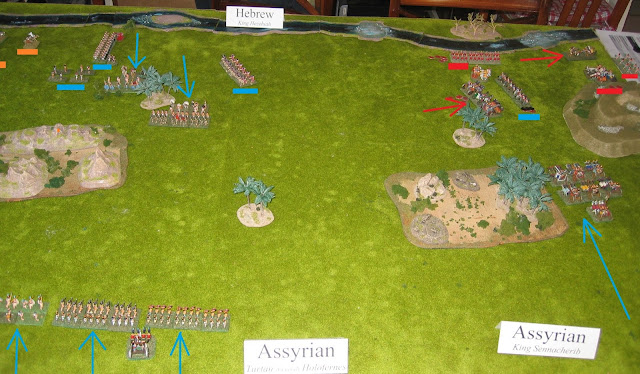 The Nineveh division started to retreat with its captives, when finally the Ashur division arrived from reserve.  They were a long way off, though - could they reach the fight before the Midianites?

On the right-hand flank, the Hebrew chariots were still occupied in chasing down the outclassed Assyrian cavalry; a task made somewhat more urgent by the approach of the Assyrians' own chariot force. 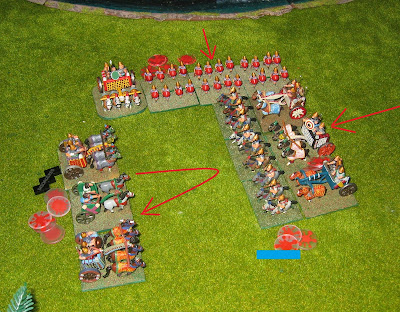 The Hebrews planned to sandwich the last of the Assyrian cavalry between their two chariot units.  This would almost certainly have been enough to wipe them out, but the Hebrew Gibborim infantry decided to join in as well [A blunder was rolled: King Hezekiah was attempting to rally the infantry.  However they were so fired up that they decided to attack, dragging the king into the melee with them!].

Once again, the Assyrian horsemen managed to drive off one chariot unit with accurate archery, before the cavalry disintegrated under a combined rear and flank attack. 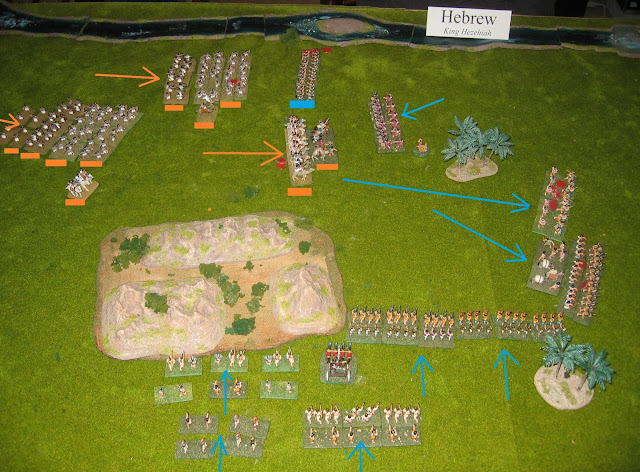 The masses of Midianite infantry advanced very sluggishly - there was even some pushing and shoving [disorder!] as units fought not to be in the lead.  Their camel riders were obviously made of sterner stuff, though: they charged forwards, saw off a unit of Assyrian territorials and claimed one of the baggage units for their own.

Before the Ashur division could wend its way through or around the broken ground to reclaim this lost loot, the Midianite general took personal charge of the baggage.  He issued a "Follow me!" order and led them rapidly off the field, leaving all the other combatants (on both sides) dumbstruck!

After this unexpected, but rather brilliant, manoeuvre it was immediately apparent that the Assyrians couldn't move fast enough to recapture the loot, so I conceded the game.

In case you have lost count, here's how it stood at the end:
So each of the players ended up with 1/3 of the spoils.  However, since the Hebrews and Midianites were allies their combined forces won the game by 4 points to 2!

Everyone had something to grumble about.  The Assyrian reserves took forever to appear, the Midianite infantry just didn't want to move forwards and the Hebrews were fighting one and a half times their own numbers.  Yet, for all that I felt that it was a good game with a lot of narrative and you know what?  Everyone had something to cheer about too!
Posted by Colgar6 at 21:46