Right, I've just returned from a week's holiday in Kintyre (it was muddy!) to find that I owe another Zomtober post.  Is there no respite?

At least this time I had prepared a couple of figures in advance to present as this Sunday's zombie vs survivor duel, so that's not a problem.  Of course, there are 2 more weekends yet to come in October this year; I still have to paint up some models for them...

This week's confrontation is between an unarmed survivor named "Lee" and "Orange Boilersuit Zombie" (OBZ). 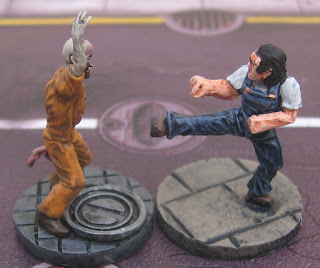 Lee is a short, thickset man, dressed in denim dungarees and a white tee shirt with strong, thick-soled work boots.  He could be from almost any manual trade.

Judging from his actions, Lee knows a bit of Kung Fu - or at least he thinks he does.  Perhaps he is indeed an expert, but I suspect from his slightly ungainly posture that he's more of a Jackie Chan fan than the real deal. 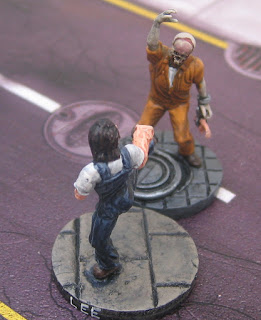 OBZ is a straightforward zombie in a brown boilersuit; he might have been an electrician, mechanic, plumber or similar artisan when still alive.  But why is he handcuffed - and what happened to the rest of the person to whom he was thus shackled?  Also, all the skin has been torn from his face, leaving just a grinning skull.  How did that happen? 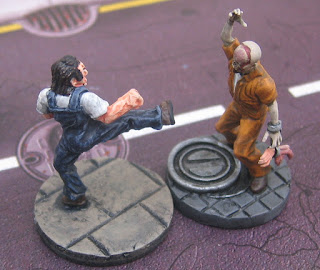 Lee is from the slightly weird Golgo Island range, specifically from Character Pack 5.  These are available from East Riding Miniatures, at least in the UK.  He's on a simple, home-made base. 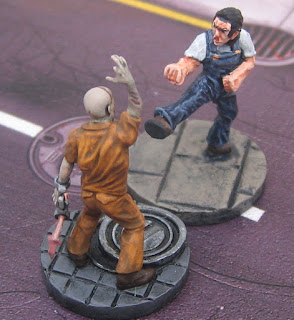 So, what happens next?  If Lee is smart enough or lucky enough then he'll use his steel-capped boots to crush OBZ's kneecaps.  He can then run away (or walk, indeed) without being pursued.  However, if Lee has delusions of grandeur and believes that he can emulate Chuck Norris then I fear the worst for him.  If the zombie catches him then I think it'll end badly for the man.

Of course, if Lee really is a kung fu maestro then he'll kick the cr*p out of the zombie!