Thank goodness: it's nearly over!  This is the fifth and final week of Zomtober 2017; I've really struggled to motivate myself to paint enough models this month.  Here's the final entry at least - I made it after all!

Last week, I showed a survivor who was, in my view, not dressed appropriately for the apocalypse.  This week, I have another survivor who isn't taking it seriously, though for a very different reason, I suspect... 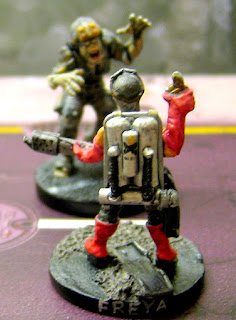 So, today's duel is between a woman called "Freya" and a model of a female soldier turned zombie ("Female Army Zombie", henceforth "FAZ"). 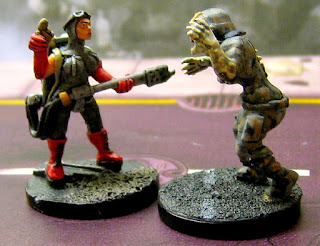 Freya is harnessed to a flame-thrower and holding a gold cigarette lighter; it seems as if fire is very much her "thing".  At a casual glance, she appears to be dressed in a wet suit, but closer examination (especially of the placement of zips on the upper chest) suggests that it is some form of fetish wear.  This assessment is reinforced by the inclusion of pink platform boots and elbow-length gloves.

I cannot see that this is appropriate wear for any situation beyond a handful of bedrooms, let alone as survival gear for the zombie apocalypse.  The inclusion of flame weapons (which as everyone knows aren't good for anything apart from being mauled by burning zombies) suggests that Freya is - how can I put this delicately - a bit of a wacko! 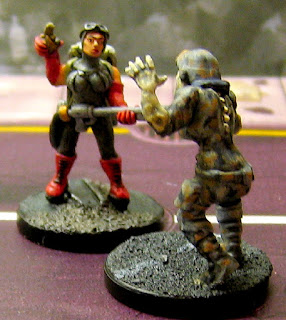 FAZ is a Mantic "Plague Zombie"; I've showed at least one of these before in a Zomtober duel.  They're technically sci-fi models, though I've shaved off most of the protruding spikes and excrescences which were bursting out of the figure.  This isn't the greatest model I've ever painted and it only has a very simple paint job.  Still, FAZ should do as a "disposable" horde opponent. 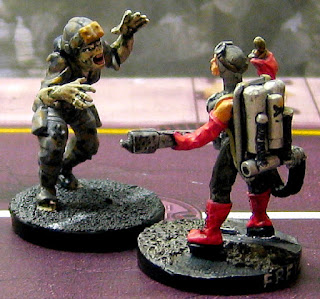 In contrast, Freya is an old metal figure from Wargames Foundry's "Street Violence" range.  If I remember correctly then she was a promotional figure entitled "Hot Whacks"; I've no idea whether the model is still available or not.  It's taken me many years to paint Freya, not because she's especially difficult but rather because I had difficulty in deciding how to do the job (just what colour should a gimp suit be?)

As ever, the question is this: who wins?

Personally, I think that Freya will turn FAZ to ashes, but I'm not sure that she actually cares whether she wins or loses.  Indeed, I rather suspect that Freya intends to go out in a blaze of glory, fulfilling some half-imagined immolation fantasy in the process.  It's the first time that I've ever felt that a human in one of my duels might actually not wish to be a survivor!
Posted by Colgar6 at 13:00