Batrep: Robin Hood and the Abbot of Newstead

There's time to fit in one more battle report in 2017 - it's the holiday season and Steve (my regular opponent) has given up some of his family time to come and play games with us instead.  This time, it's a Song of Blades and Heroes battle featuring a certain 12th century English folk hero... 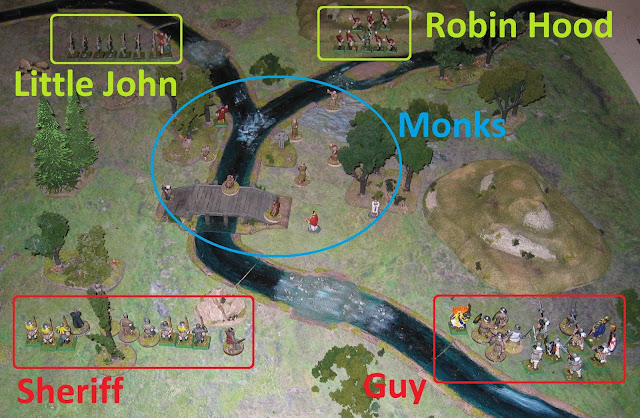 I thought long and hard about creating a novel & interesting scenario for this game (in other words, I left it until the night before and then scrambled to come up with any ideas).  In the end, I picked the "Magical Cattle Raid" scenario from the Song of Arthur and Merlin rules.  Of course, Robin Hood wouldn't usually be found chasing magical cattle, so I changed the story a bit.  Here's how it goes:

The Abbot of Newstead is visiting a small shrine near to Sherwood Forest.  This shrine is situated at the spot where Saint Alban performed one of his miracles several hundred years earlier (restoring to life a man who had been cut in half during a fight with his visiting relatives).  In reality it's not a very significant shrine; it is to be found at a river fork in a remote and somewhat inhospitable location.

Both the forest outlaws (led by Robin Hood) and the authorities (led by the Sheriff of Nottingham) have got wind of this expedition.  Both groups would like to lay their hands on the Abbot and his monks, either to rob/ransom them or to petition their support for/against the outlaws' cause.  Or to rob them and petition for their support.

Each monk can be led to "safety" by any of the players' models, though at a reduced speed:
Here's the catch: the abbot and his important colleagues have suspected that this form of treachery might occur.  They have (or at least, may have) changed clothes with the lesser monks.  It's up to the two warbands to try to identify the real abbot, secretary &c.  This is implemented by the following scenario rule: 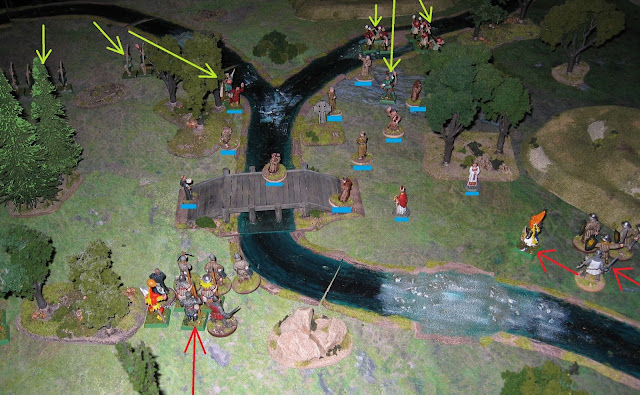 Predictably, both sides used their first turn to advance.  In most cases, the players moved their main heroes ahead of the pack, mainly to try to close the gap with the bulk of the enemy and thus deny them a free "long range" activation for the bulk of their figures [In Song of Blades and Heroes, a model which is more than a certain distance from any enemy can take a single activation per turn without having to dice for it - this is very useful for marching bodies of the less resolute soldiers towards their objectives]. 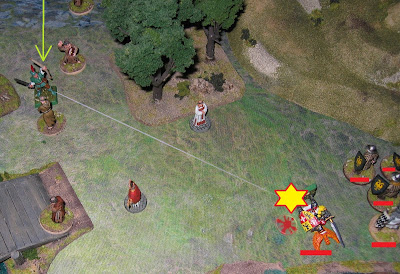 Seeing that Sir Guy was ahead of his troops, Robin Hood ran forwards and shot an arrow at him [in game terms, Robin rolled 3 dice for activation and achieved 3 successes.  He used one to move and the other two to take an aimed shot at medium range].  The missile was perfectly on target and Guy of Gisborne fell, pierced by an arrow.

As the leader of the bad guys, this was a disaster!  Our best fighter, shot down in turn two without having even engaged an enemy?  Of course, it was very heroic and cinematic for the good guys, if you like that sort of thing... 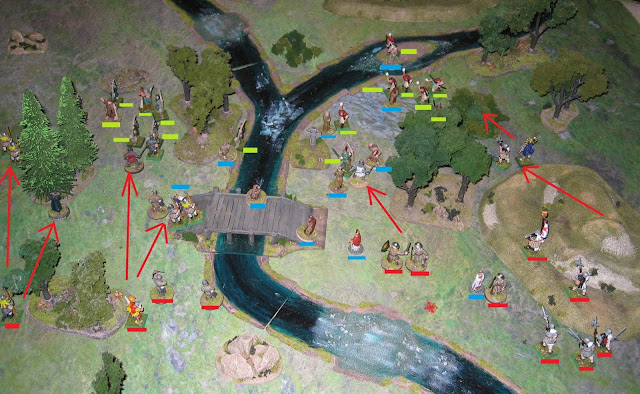 In response, the White Knight ran forwards to engage Robin Hood.  Various monks were seized by both sides (though mostly by Robin's men) and the Sheriff of Nottingham hid behind a tree.

There was a lot of dawdling and hanging back by Guy's minions... 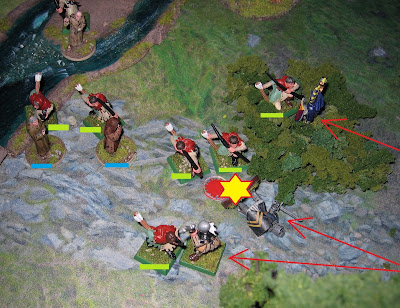 Guy's knights continued their flanking manoeuvre, though this didn't work quite as hoped.  Sir Stanley found himself engaging an outlaw in the middle of a gorse thicket, whilst the Black Knight ran into a pair of ruffians and was promptly pulled down and knifed! 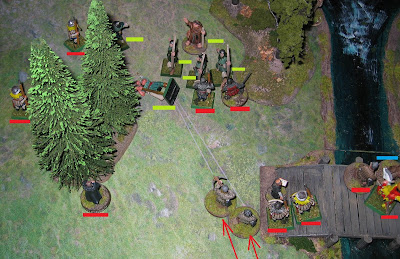 On the other flank, Little John strode forward with a view to whacking the Sheriff's men with his huge quarterstaff [Hmm.  I think it must be at least a half-staff; it's a lot bigger than a regular quarterstaff].  Before he could engage anyone, a couple of the sheriff's crossbowmen advanced, shooting as they moved [in an act of desperation, I was rolling 3 dice for activation for just about everyone.  Miraculously, this pair both passed with 2 successes].

Little John ignored the first bolt, but the second one was a lot closer.  He dodged it, lost his balance and fell over. 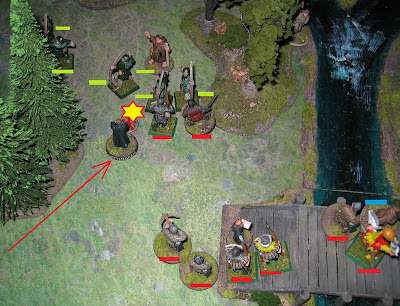 This was the cowardly Sheriff's kind of fight!  He raced forwards from where he had been hiding and stabbed the fallen giant.  Before Little John had struck a blow, he was out of action. 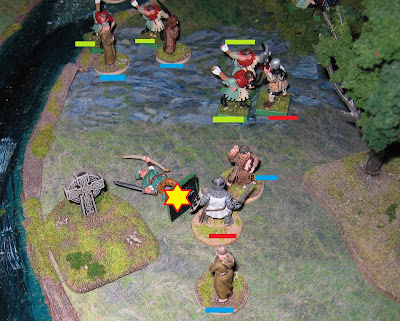 After a prolonged fencing match, the White Knight defeated Robin Hood and knocked him out.  The major characters were dropping like flies!  [As I recall, at this point in the game not even a single unnamed minion had become a casualty - yet the three supposedly best fighters were all gone]. 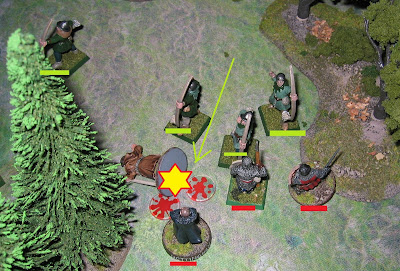 Friar Tuck charged forwards to avenge his friend - straight on to the Sheriff's blade.  The Sheriff didn't even have to move and another outlaw character was down! 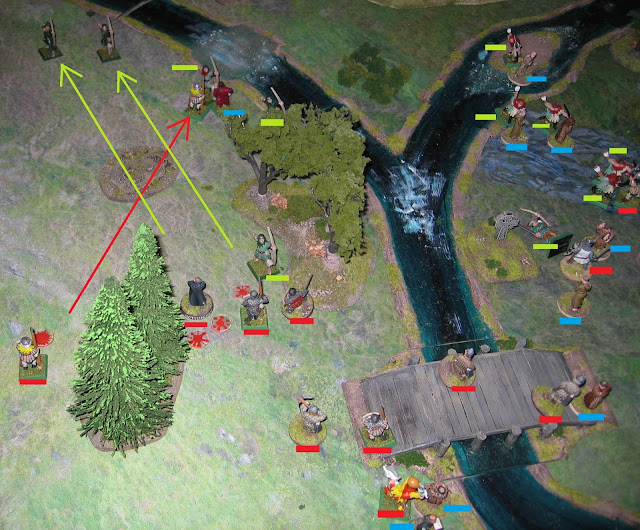 On seeing Friar Tuck's gruesome death, some of the outlaws ran back towards the river, full of horror.  Seeing this retreat, one of the sheriff's more enthusiastic spearmen charged forwards to try to save the abbot's treasurer from a brigand who was leading him away. 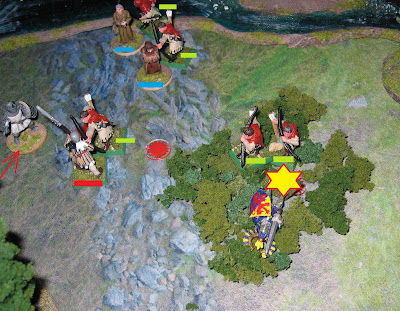 The White Knight followed up his success against the outlaw leader by running towards the riverbank where several brigands were towing away reluctant monks.

It was about this time that Sir Stanley was killed by a couple of ruffians whilst trying to untangle himself from the middle of a gorse bush... 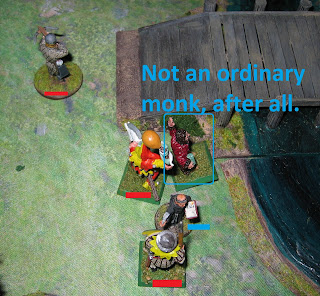 The outlaws had almost taken one important-looking monk off the table when Yorik (the jester) took a closer look at his own captive.  "Just a moment!" he exclaimed, as he pulled the hood from the "monk's" head.  The man didn't have a tonsure; he wasn't one of the monks after all.  "You're their treasurer, aren't you?"  [Of course, as the models were swapped there was a simultaneous cry of despair from the other end of the table when an outlaw realised that his captive was a simple brother monk and not one of the important inner circle as had been thought!] 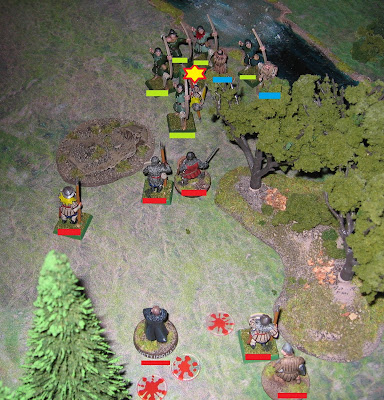 Things seemed to be going very well for the Sheriff; his troops were closing in on a leaderless enemy and it looked as if it wouldn't be long before the rebel scum were given their just deserts!  Of course, in Song of Blades and Heroes, little things can cause huge ripple effects.

In this case, the trigger was simple: the remaining outlaws all mobbed the spearman who had run on ahead.  Between them, they scored a gruesome kill.  This would cause all of the Sheriff's men who were within 'L' distance [i.e. Sir Walter and two more spearmen] to take a morale check. 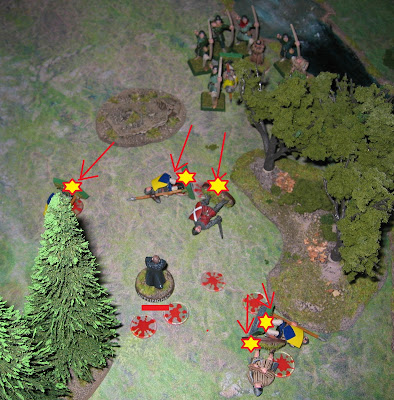 The problem is that the Sheriff has the Evil attribute.  Amongst other things, this means that he will slay any cowardly underling who tries to run away [and is foolish enough to run within the Sheriff's reach whilst doing so].
D*mn it - he's done it again!  Almost every game where I play the Sheriff, he ends up killing most of his own men for cowardice [see the various other "Robin Hood" battle reports on this blog].  The man's a grade I psychopath!  And we were winning, at that... 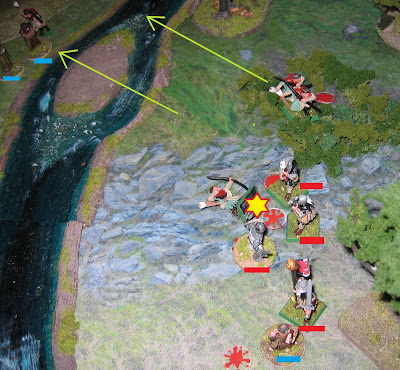 The final blow of the game was struck on the other side of the river, where the White Knight and his minions slew one of the outlaws.  With that, the rest of the foresters slunk away, taking several monks with them.

The remaining outlaws did briefly consider having a go at the Sheriff, but he retreated before they could organise themselves.  In any case, pretty much all of the forces [apart from Guy's, oddly enough] were now below 50% of their starting costs and therefore didn't have many men to commit - they were too busy escorting monks to "safety".

Instead, we called the game and worked out the result.
Therefore it's a solid win for the Sheriff and his followers!  The outlaws are chased off and the Abbot & his entourage are (mostly) saved.  I'm sure that the Sheriff will be magnanimous in victory and not tax the abbey too heavily...