I have a very slow project to collect a "Wicked Witch of the West" army for Hordes of the Things.  This is of course from the land of Oz which is described in the books of L. Frank Baum and is probably best known to most people from the 1939 MGM film "The Wizard of Oz".

In that film, the witch is shown commanding legions of flying monkeys and has a number of Winkie spearmen as her castle guards.  However, the book also describes her sending crows, bees and wolves to torment and distract Dorothy's party.

OK, so what's the plan?  The army I envisage will have:
The rest of this article describes how I did indeed model some bees.

The problem with modelling bees or any other insect swarm is this:
This being so, it's simply not practical to make 3D representations of each individual insect, connected by wires or similar.  Instead, they'll need to be painted onto some surface.

I thought about transparent shapes for a while; they need to encompass quite a large volume but be as unobtrusive as possible.  A small dome might work well (repurposed snow globe?), but I didn't have anything like that. 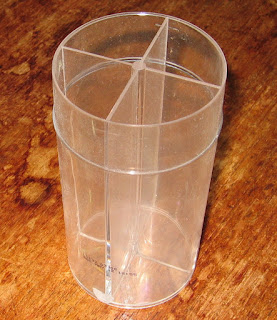 Here's an interesting piece of clear plastic, though.  It's an empty food container; I think it originally held 4 different types of chocolate cake sprinkles.  Maybe it will work for what I intend to build?

Firstly, I cut off the outer parts; I was only really interested in the inner core.  I used a razor saw to make the cuts; note that this was not easy as I was trying very hard not to scratch or otherwise mark the pieces. 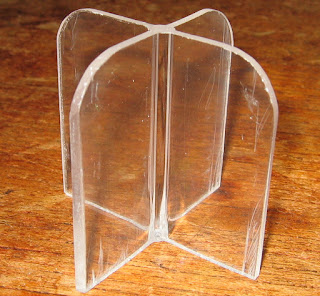 Once I had the length of core piece that I wanted, I rounded the top corners and smoothed the edges as much as possible.  My attempts to polish out the scratches were useless, but I did paint some clear varnish over the cut edges and this does seem to have helped to tone down the "whiteness".

How do you paint a Bee?

Indeed - how do you paint a bee?  I needed a simple recipe which could be repeated dozens (hundreds?) of times at very small scale, yet which would represent the insect a bit better than a plain, black dot. 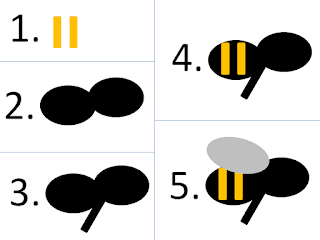 Here's what I came up with: 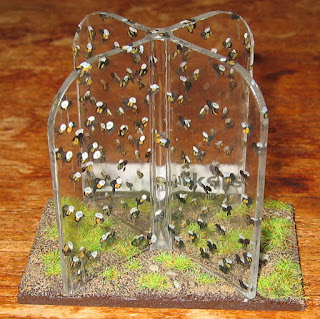 One I had painted all my bees, it was a trivial matter to create a suitable base and glue the "swarm" to it. 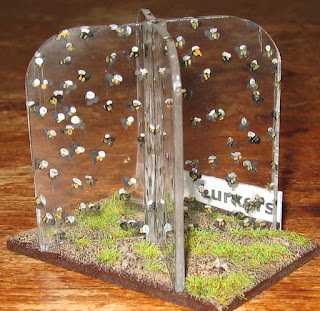 Note that the bees are fairly crude!  I did follow my recipe, but the blobs and lines are not very precise.  Indeed, I kept discovering mistakes - such as bees without wings - and although I think that I've fixed all of these, I cannot be sure.  Still, does it matter; no-one will be looking at the individual insects, will they?

I'm reasonably happy with the result.  This was a very cheap build in terms of materials and didn't even take too much time.  It could just as easily be used to model any other type of flying swarm, of course - locusts, flies, winged ants, wasps or whatever else you fancy.

The only thing that I'm unsure about is the shape of the clear plastic core.  Perhaps a small dome would have worked better after all?