Just over a month ago, I showed the state of my workbench (here ==>).  Since then, I've been trying conscientiously to finish some of the longer-term projects which were contributing to the clutter.  Whilst this task is by no means complete, I have made progress; here are some of the results...

I've been working my way through one of the Super Dungeon Explore expansions: the "Emerald Valley" warband set.  So far, I've completed the hero that came with this set (the Silver Chevalier) and have moved on to the monsters that inhabit the area. 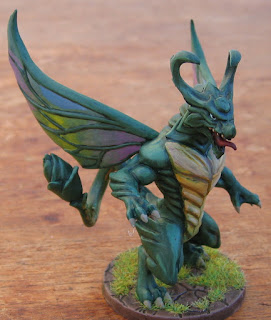 This is Glimmerwing, the mini-boss who controls Emerald Valley.  She's a 'Fairy Dragon', which seems to mean that her strengths in game terms are in magic use rather than physical power.  Having said this, I'd say that the model looks quite robust enough to chew off some adventurer's head! 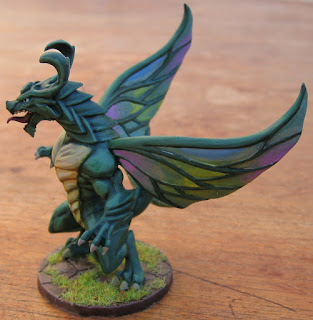 Most of this mode is simply painted green and then highlighted with 2 or 3 lighter shades.

The wings were more involved, as only the "veins" were done in green.  The "membrane" between these prominent lines was painted in a pale undercoat and then coloured with several thick washes/thin paints (take your pick).  Water was used on the brush to lessen the intensity of each colour when further away from the focal point, or even to blend a little with an adjacent colour.

Whilst the result isn't perfect, I'm reasonably happy with it. 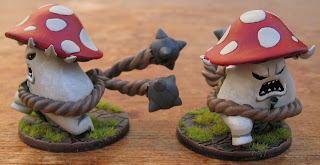 The Emerald Valley warband itself consists of pigs and mushrooms.  Not scary?  Take a look at these elite Okoshrooms!  Basically, one of these is a very large mushroom man with a rope around its middle, tied to two large mace heads. 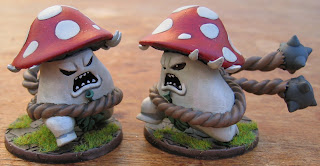 There's not a lot of detail on the mushroom bodies, but I have attempted some subtle shading nevertheless.  Fortunately, the rope, face and cap add plenty of colour and texture to draw the eye away from the bland body.

Out of curiosity, why does a mushroom need a fig leaf (or equivalent)?  Modesty seems unlikely, both from a botanical point of view and also because these berserkers don't seem the types to be worried by such a consideration.  Who knows (though it's probably better if you keep your answers to yourself)?


Hordes of the Things: Barbarians

My Barbarian army for Hordes of the Things has been growing steadily.  Last year, it was large enough to provide one part of the force which took on Santa in my annual Christmas Game.  Since then, I've expanded it by adding some panther cavalry, with the ultimate aim of being able to field 48 or 72AP (i.e. 2 or 3 times the normal HotT army size). 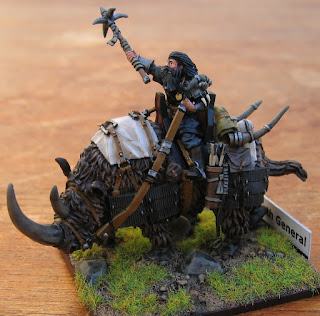 I've been looking for a general for the second 24AP "army" and here he is.  As soon as I saw this model, I knew that I had found my barbarian chieftain!  He is, of course, Kovornik, the Barbarian Outcast from the Frostgrave range.  I've classed him as a somewhat-unusual Behemoth General.  In HotT, Behemoths are usually big, dumb things such as trolls or giants, not leaders.  It'll be interesting to see how well or badly this works in practice... 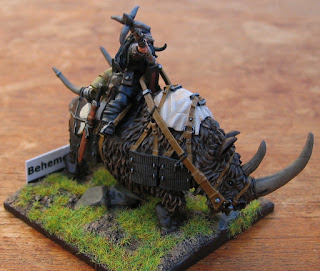 This is a all-resin model and it's incredibly detailed.  For a long time I was too scared to do much with it, but once I knuckled down I found that it wasn't too hard after all.  Still took a while to paint, though... 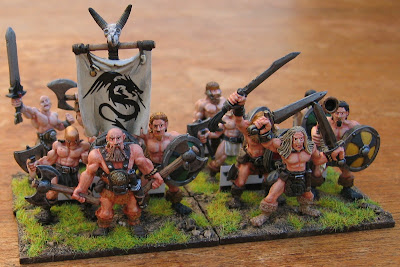 Finally, here are some more Barbarian warband elements.  The figures are all 28mm castings from Black Tree Design, though this time there are some conversions in amongst them.  Some of these BTD models were spearmen, but I wanted them to represent HotT warband rather than spear bases.

The standard bearer is an obvious and straightforward adaptation; the top of the spear was cut off  and replaced with a banner from an old set of plastic Warhammer goblins.

Two other spearmen had their entire right arms (including the spears) removed at the shoulder.  These were replaced by arms from the same set of Warhammer goblins, one waving a crude sword and the other holding a large, curved horn.  I was very pleased to find that he plastic parts fitted very well and were just the right size and style!

As always, this isn't everything on which I have been working recently, but it is fairly representative.  It's a considerable relief to be completing models again and reducing the clutter on the work bench - especially as Christmas is coming up very soon.  After all, who knows how much new stuff I might be given then?